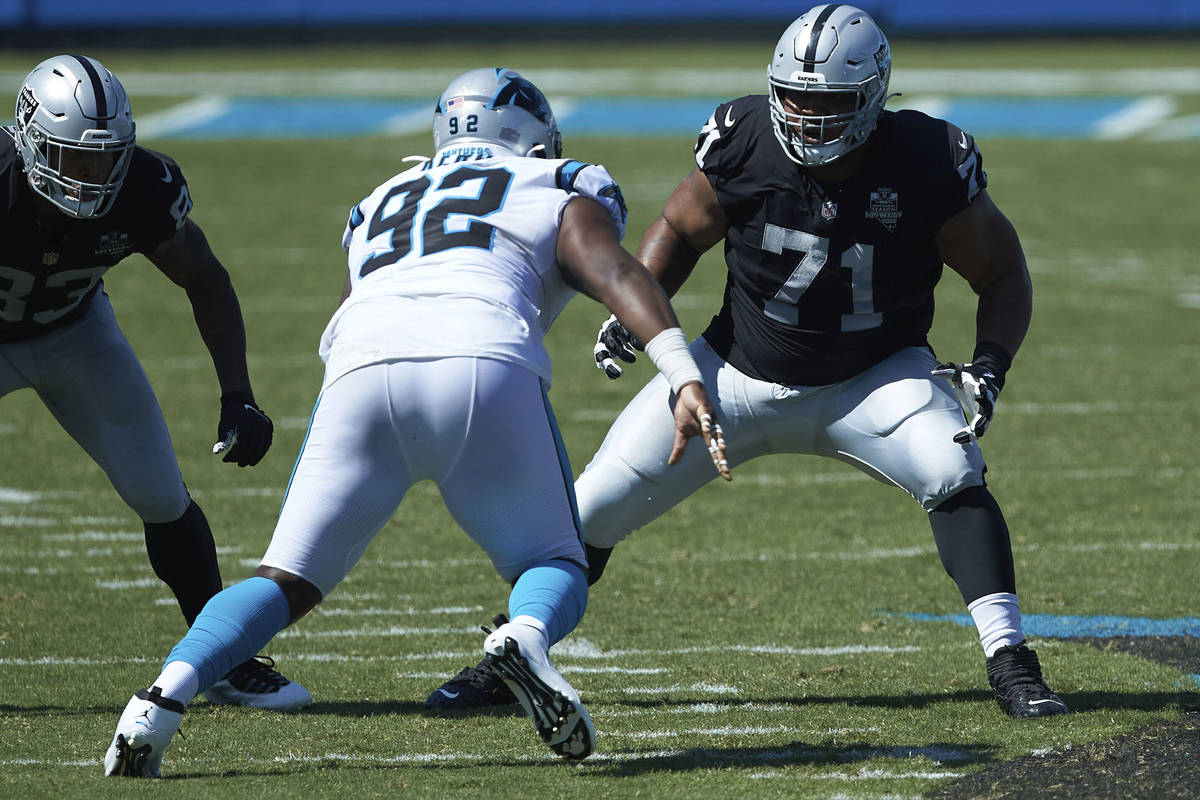 As Denzelle Good stood on the Raiders’ sideline on Sunday in Charlotte, he had an inkling his world was about to change.

But even he couldn’t imagine the opportunity awaiting him that would make him the unlikely hero of the Raiders’ season-opening win over the Carolina Panthers and perhaps thrust him into an even more important role in the weeks ahead.

It all happened because of a roster decision the Raiders made a few hours before that left them extremely thin at offensive tackle, only for disaster to strike when right tackle Trent Brown had to leave the game after three plays with a calf injury and backup Sam Young followed him to the medical tent five plays later.

“I’ve never been in a game where you lose two players at one position in the first 10 snaps,” Raiders coach Jon Gruden said.

That calamity left Good, the Raiders’ backup guard, to play the rest of the game at tackle even though he hadn’t taken a single practice rep at that position in more than a year.

“I don’t know that I’ve ever experienced anything quite like that, moving a guard out there,” said Raiders tight end Jason Witten.

It was a possibility Good began bracing for as soon as Brown left the game.

“I try to think about all scenarios, but when I saw Trent go down, it became at the foremost of my thoughts,” said Good, who remembers joking about that possibility with backup center Andre James on the sidelines. “I was like, “Man, I can’t believe I might have to play tackle.”

Barely a minute or two after uttering those words, Young was hobbling around with a groin injury. Immediately after, Good began going through a mental checklist in case his name was called.

“First of all, I just had to make sure I had my helmet in my hands,” Good remembered, laughing.

Sure enough, Young’s injury was significant enough to take him out of the game. At that point, Good began searching out the Raiders’ offensive line coach. “When I saw Tom Cable look back, I knew I was going into the game,” he said.

Onto the field the five-year veteran out of Mars Hill University ran, smack in the middle of a drive, without any preparation or forewarning. As he reached the line of scrimmage, he did something familiar to get his mind and body right.

“The first thing I did was get into a guard stance, just so I could get loosened up and be comfortable,” Good said.

The next thing he did was do a mental recap of the Panthers’ defensive line, although his command of their outside defenders was limited given he spent the entire week studying a completely different position group.

“As an offensive lineman, you look at all of the guys on the line. But getting prepared to back up Gabe (Jackson) and Richie (Incognito), I’m looking at the inside guys, seeing what they bring to the table, so I didn’t pay too much attention,” Good said. “All I did know is they had a lot of speed on the edge.”

Lastly, he had to make the physical transition going from the much quicker game in the interior of the line to the more moderate pace on the outside.

“I just had to slow my game down a little bit,” Good said. “You know how it is on the inside everything is fast-paced, But on the outside, it requires a little patience.”

Interestingly, his fellow linemen were unaware he was on the field. “Those guys were so zoned in they didn’t even realize I was in the game for a least a play or two,” Good said with a laugh.

The Raiders, as it turned out, didn’t miss a beat offensively. And Good was a big part of the line helping Josh Jacobs run for 93 yards and quarterback Derek Carr attempt 30 passes without getting sacked.

More importantly, after the Raiders fell behind in the fourth quarter and needed a big drive to win the game, they drove 75 yards to score the go-ahead touchdown.

All with a backup guard taking over right tackle responsibilities.

In the process, he won over a bunch of teammates.

“That’s what I true pro does,” said Witten. “He stepped in and played well. I thought his communication was off the charts, just echoing the calls, passing that down. To be able to come in on the road in a hot environment and play a new position, that says a lot about who he is.”

With Brown and Young both unable to practice on Thursday and their status for Monday’s game against the Saints up in the air, the Raiders might need Good to duplicate his performance. It also means tackle Brandon Parker, who did not suit up Sunday, might be pressed into duty.

“He didn’t flinch,” Witten said. “Our team didn’t flinch. And I think it showed with the way coach called the game. They had a lot of confidence in Goody and what he can do.”