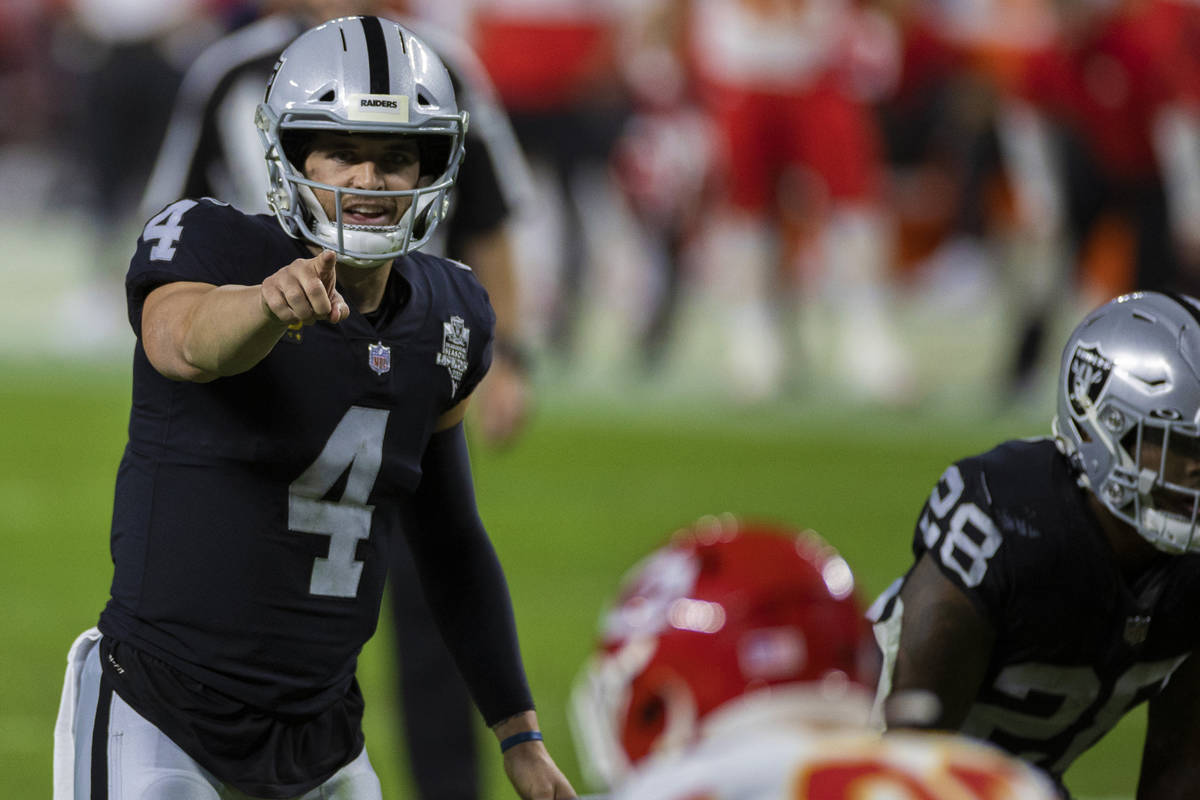 Social media users have been having a field day trying to figure out what some of Derek Carr’s more obscure audibles mean since they can be heard so clearly with no crowd noise.

The Raiders quarterback, and his coach Jon Gruden, said Wednesday the silly words and phrases are often just dummy calls. Gruden described it as being similar to a baseball third-base coach, who who goes through all sorts of gesticulations only to have an indicator sign that triggers a baserunner to know when to really pay attention.

Gruden denies playing a role in some of the more creative calls.

“You think I came up with purple walrus?” he asked.

Carr has used everything from “Lava Rage” to “Rihanna” to a multitude of city names and even the name of his coach’s wife, “Cindy Gruden.” The internet was fascinated this weekend by a call of “James Harden,” which people assumed meant a running play because he would never pass.

“I don’t know where he comes up with some of this stuff,” Gruden said. “A lot of it is fake chatter, it means nothing.”

Carr laughed about some of the speculation he has seen online.

“It’s been fun for me,” he said. “Honestly, some of my best friends will send me tweets of people trying to figure out what they mean and it’s so funny how wrong people are. But it’s fun to read.

“I’ve used probably 20 of them where the same word means different things. I’ve had some good ones. I’ve been able to have some fun with it as well, throw some different names out there. I’ve got some new ones for this game. My mind is always working, coming up with stuff. But I don’t come up with all of them. I’m not that smart.”

On a practical level, Gruden did express some frustration with the audio being so accessible now. While defenses have always been able to hear at the line of scrimmage, now the calls are very easy to pick up on video.

Carr said it doesn’t matter to him because some of the phrases are so obscure and interchangeable and can mean different things from game to game, but Gruden wasn’t as cavalier.

“It’s a shame that now we’re giving access to our snap count and inventory of plays on live TV,” he said. “I don’t know what the world is coming to.”

Gruden said he hopes to have Clelin Ferrell back in the team facility and off the reserve/COVID-19 list as soon as Thursday.

The question is if he can be ready for Sunday at Atlanta.

“I don’t know how he’s going to play, honestly,” Gruden said. “We haven’t seen him in a while. We’re going to do the right things to ramp him up and make sure he’s OK.”

Cory Littleton returned to practice on Wednesday and Gruden expressed optimism the team would have Lamarcus Joyner and Theo Riddick back from the COVID-19 list soon, as well.

Cornerbacks Damon Arnette and Amik Robertson did not participate in Wednesday’s practice because of illness.

Defensive tackle Maurice Hurst (ankle) was able to get in a full practice session, while Alec Ingold was still limited by the rib injury he’s been able to play through the last two weeks.

Carr is coming off one of the better games of his career, even in a loss.

Pro Football Focus graded his performance against the Chiefs a 96.0, the highest score of the season and the second-best single-game grade of any quarterback since 2016.

He finished 23-for-31 for 275 yards and three touchdowns with his only interception coming on a desperation heave in the closing seconds.

PFF pointed out four of his eight incompletions were dropped passes and two others were throwaways.

He also had the highest accuracy percentage on throws of 10 or more yards and tied for the league lead with five “big-time throws” this week.