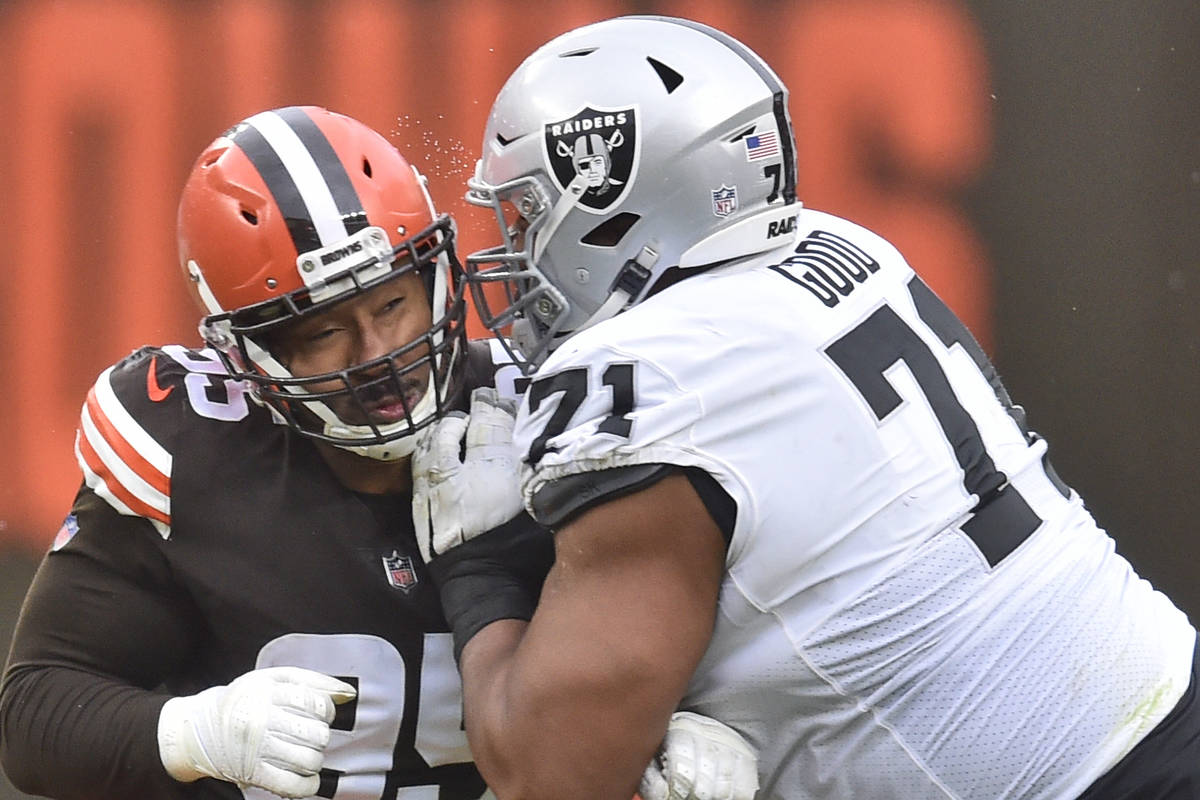 Denzelle Good entered the season as a versatile option on the Raiders’ offensive line. That’s because of his ability to step in at just about any position.

Through the first half of the season, he’s been one of the team’s most important players.

High praise for someone who didn’t even have a starting position when the season started.

Good was called upon earlier than expected when both starting right tackle Trent Brown and his backup, Sam Young, were injured in the first half of the season opener against Carolina.

He ended up playing 71 percent of the Raiders’ offensive snaps on that day. He has played every single snap in the last six games, mostly in place of injured left guard Richie Incognito.

Good is just happy to be able to contribute.

“I’m glad to be able to be the guy to step up for the team in whatever way is needed,” he said. “That’s kind of been my role the last two years here and I embrace it.”

A seventh-round pick of the Colts in 2015, the South Carolina native made 20 starts at right tackle among his 26 appearances before he was released during the 2018 season.

He was quickly signed by the Raiders and played four games at the end of the season, making three starts in place of an injured Jackson.

His play at the end of the year earned him a one-year deal with the Raiders for 2019. Good once again was a key depth piece for the Raiders. He made five starts at guard, earning another one-year deal for this season.

His presence has been vital. “What he’s been able to do for us, it’s unbelievable,” Carr said.

Good appreciates the accolades. It’s not often a role player on the offensive line is referred to as a potential team MVP.

“It’s been great,” he said. “I feel like I’m a respected part of the team. The coaches know what to expect out of me.”

While Good said you never want a teammate to be injured, but “it’s 100 percent a part of the NFL, so you just have to be prepared for it.”

Good said offensive line coach Tom Cable “does a great job of that, just being ready for any situation.”

That’s Good’s specialty. After starting his career as a tackle, he has spent the vast majority of his time on the interior of the offensive line.

Moving back to tackle in the opener was a bit of a jolt. It made Good realize how much guard has now become second nature to him.

“You don’t really have a choice because you just have to put your head down and go to work,” Good said.

Good, just the third player drafted from Mars Hill in North Carolina, has allowed just one sack and committed three penalties on 465 snaps this season, according to Pro Football Focus. which ranks him the 39th best guard among 77 qualifying players in the NFL.

He hopes the offensive line is able to build off the momentum of an impressive performance against the Browns. The Raiders ran the ball 45 times for 209 yards in bad weather to secure a win.

“If we can hand the ball off 45 times every game, I’d vote for that for sure,” he said. “That’s not always realistic obviously, but it was great to have that kind of game and have the offense take over like that. I love it.”

His teammates and coaches love him.