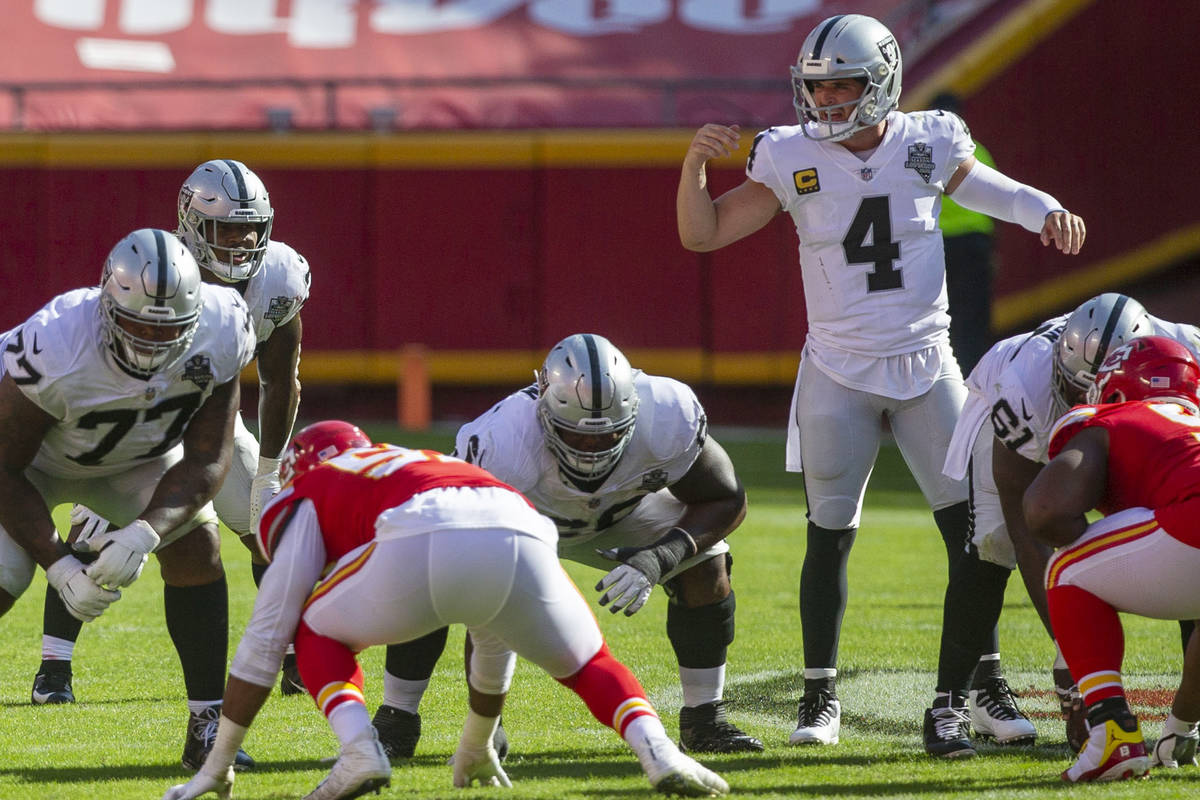 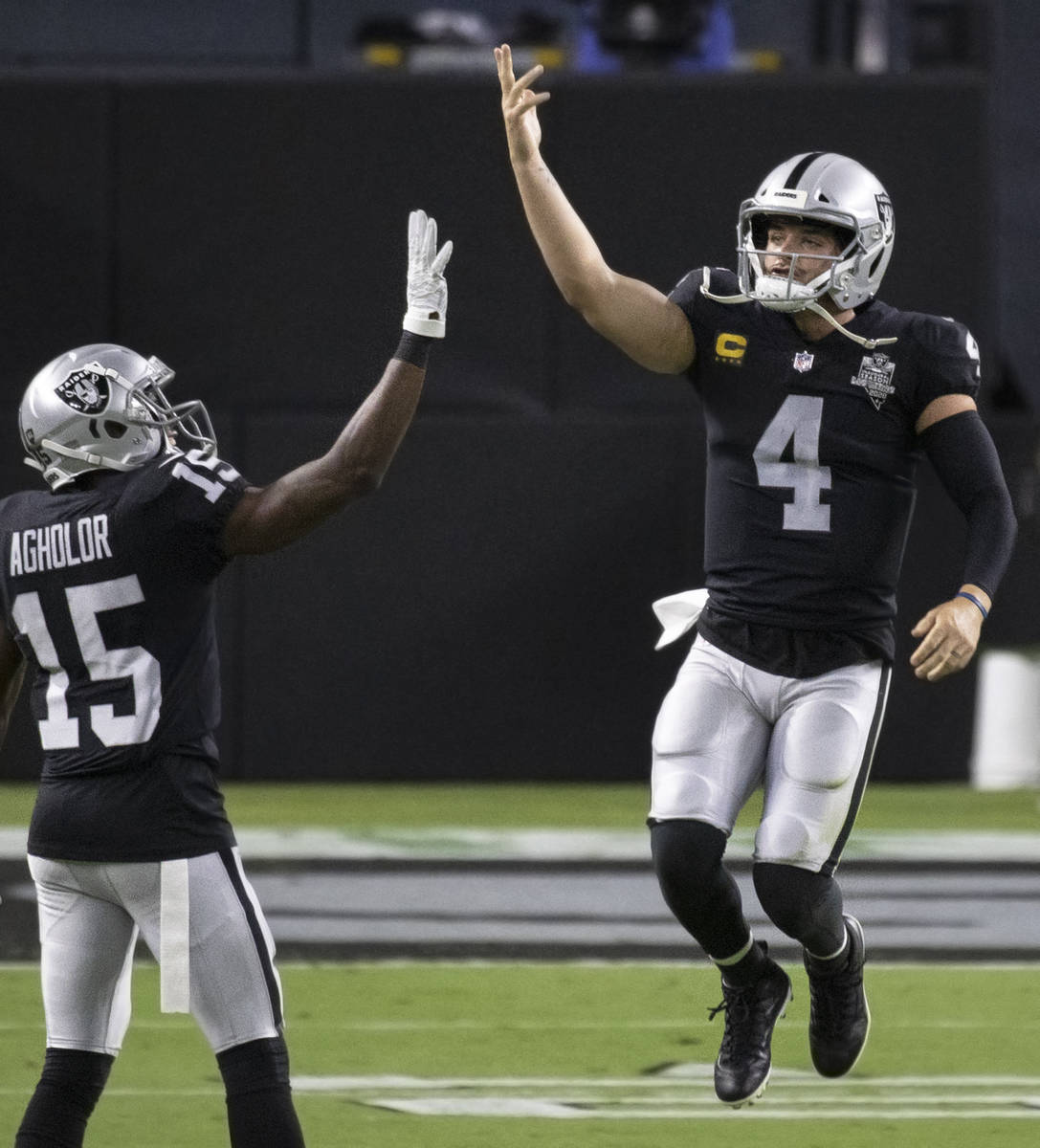 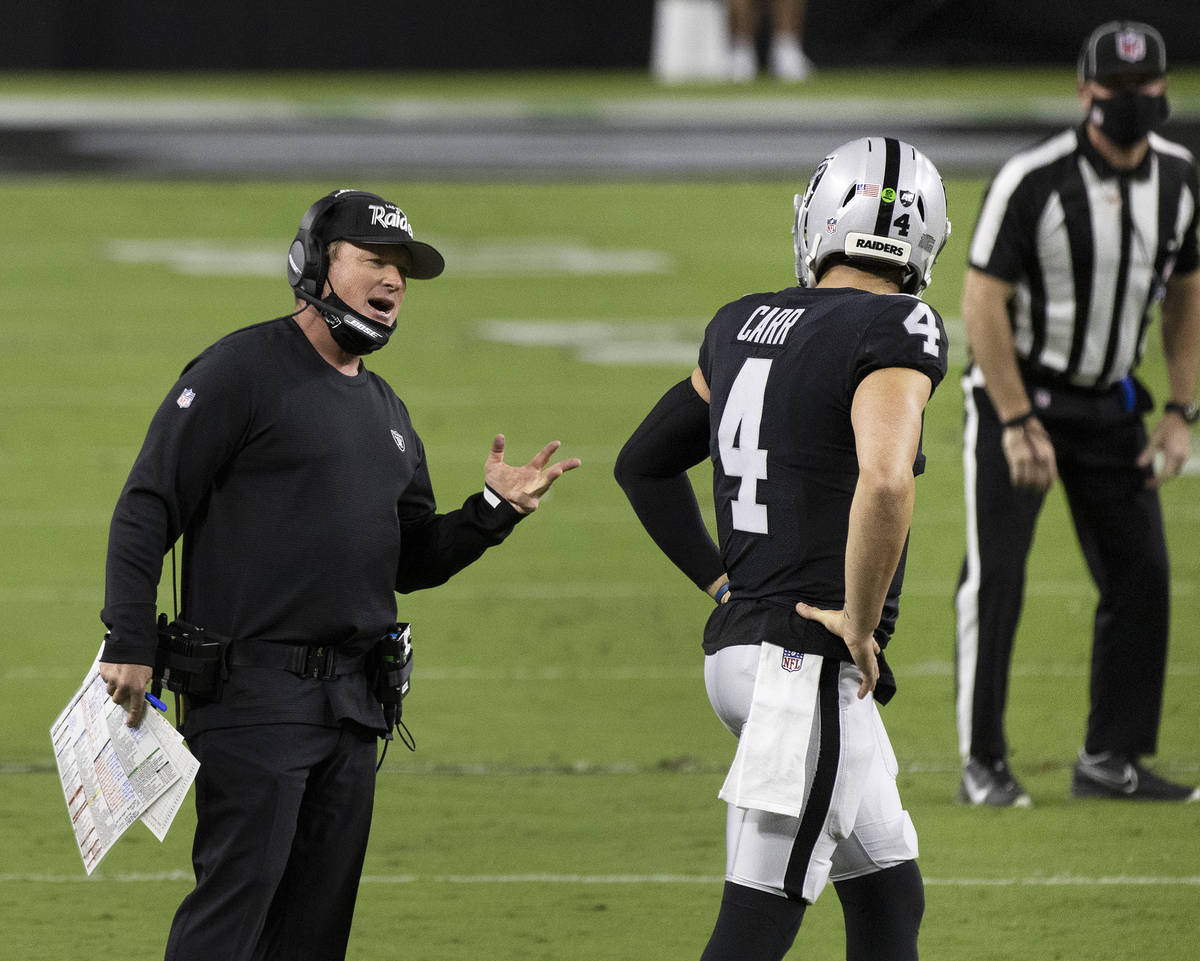 The Raiders stand at 3-2 during their bye week. Though that might seem like a pleasant surprise, there is internal frustration over the self-inflicted wounds that cost the Raiders two losses.

After a rough early season schedule, a defense that has struggled and injuries to multiple starters, the Raiders are tied for the last playoff spot in the AFC.

That is mostly because of an offense that ranks seventh in the NFL in scoring (30.2) and yards per game (399.4) and quarterback Derek Carr on pace for the best season of his career.

Yet there’s more to the Raiders than impressive numbers. There’s also letters — for grades — and they tell a better story of where this team stands.

Derek Carr began training camp by saying he was “tired of being disrespected.” The seventh-year quarterback is doing something about it.

Carr is seventh in the NFL in QBR at 80.8, third in passer rating at 115.9 and eighth in total passing yards at 1,442. His 11 touchdowns are sixth overall, and his one interception is tied with Patrick Mahomes for the second-fewest. His 73.1 completion percentage trails only Teddy Bridgewater.

Carr’s only blemishes: Two fumbles that contributed to the two losses, although both were the result of protection breakdowns. Nevertheless, taking care of the ball in crisis will be a focus moving forward.

Josh Jacobs is off last season’s rookie pace, but he is second in the NFL in rushing yards at 377 — with a league-leading 106 carries. The Raiders would like to push his 3.6 yards average above the 4.0 mark, although that depends on the offensive line getting healthy and providing a better push.

Backup Devontae Booker has provided solid production with 121 yards on 17 carries, and with the Raiders intent on preserving Jacobs through the course of the season, expect Booker to get more playing time.

Jalen Richard has not been asked to run much, but he adds a nice change of pace with 10 catches and 59 yards. And fullback Alec Ingold has emerged in his second year as a capable receiver (seven catches, 70 yards) with his blocking and short-yardage running.

The Raiders added Ruggs and Edwards through the draft and Agholor in free agency. Along with holdover Hunter Renfrow, they have helped turn a weakness into a strength.

The key is making sure everyone stays healthy, as Ruggs missed two games with knee and hamstring issues and Edwards has been sidelined the past two games with an ankle injury.

Tight end Darren Waller leads the Raiders in receptions (34) and yards (295) and heads a deep tight end group along with Jason Witten and Foster Moreau.

Assistant coach Tom Cable deserves recognition for holding this group together despite a rash of injuries that have limited right tackle Trent Brown to one full game and resulted in left guard Richie Incognito playing in two games because of an Achilles tendon injury.

Denzelle Good and rookie John Simpson have filled in admirably, with Good playing both tackle and guard to pick up for Brown and Incognito.

Brown returned Sunday against the Chiefs after playing three plays during the first four games, and his presence was felt as the offensive line produced its best effort of the year. With third-year left tackle Kolton Miller playing his best, the group is as good as any in the league when healthy as center Rodney Hudson and right guard Gabe Jackson are still playing high-quality football.

If Brown and Incognito can consistently stay on the field, the Raiders will be in great shape up front.

This group largely has been a disappointment through the first five games, especially in creating a pass rush. But a sizzling performance against the Chiefs, in which they continually harassed Mahomes, could mark a turning point.

Maxx Crosby is tied for the NFL lead with four sacks, but to take that next step he needs to improve against the run. Clelin Ferrell got untracked in Kansas City with five quarterback pressures.

The Raiders invested heavily in free agents Cory Littleton and Nick Kwiatkoski, but they have been disappointing.

Littleton, a tackling machine during the last two seasons with the Rams, is well off his normal pace with 27 total tackles — tied for 74th in the NFL — and his 36.4 Pro Football Focus pass coverage grade is ranked 69th. The Raiders expect, and need, more.

His struggles in both areas — coupled with the issues upfront — have resulted in the Raiders surrendering foes an average of 126.8 rushing yards, which is 21st in the NFL, and an average of 30.4 points, which ranks 27th.

After missing two games with a pectoral injury, Kwiatkoski delivered his best game and is grading out as the eighth-best linebacker in the NFL with a 78.1 overall mark from PFF.

The Raiders have been mixing and matching alongside Littleton and Kwiatkoski with Nicholas Morrow and Raekwon McMillan — each getting opportunities but neither distinguishing themselves. That is an area the Raiders are likely to address at some point.

The Raiders need better play from this group, although part of that is predicated on the pass rush getting untracked. Too often, cornerbacks Trayvon Mullen, Damon Arnette, Lamarcus Joyner, Nevin Lawson and Amik Robertson have been asked to cover for long periods because of a lackluster pass rush.

Meanwhile, Erik Harris and Johnathan Abram are ranked 72nd and 73rd, respectfully, among NFL safeties. Both need to improve during the final 11 games.

Kicker Daniel Carlson has rebounded from his late-season struggles last year and is ranked third among NFL kickers. Carlson is 11-for-12 on field goals, including 3-for-3 from 50 or more yards, and is 16-for-17 on extra points.

Jon Gruden has done a good job navigating the Raiders, who have had injuries to multiple starters, through a difficult early season schedule.

His fingerprints are all over an offense that has shown it can move the ball against anyone. The key is making sure the Raiders avoid turnovers and penalties. They are 3-0 when they take care of the ball and minimize the penalties, but 0-2 when they don’t.

Defensive coordinator Paul Guenther has to create a way to improve his group’s play. Too often the offense has had to win in shootouts, and that is not a sustainable model.