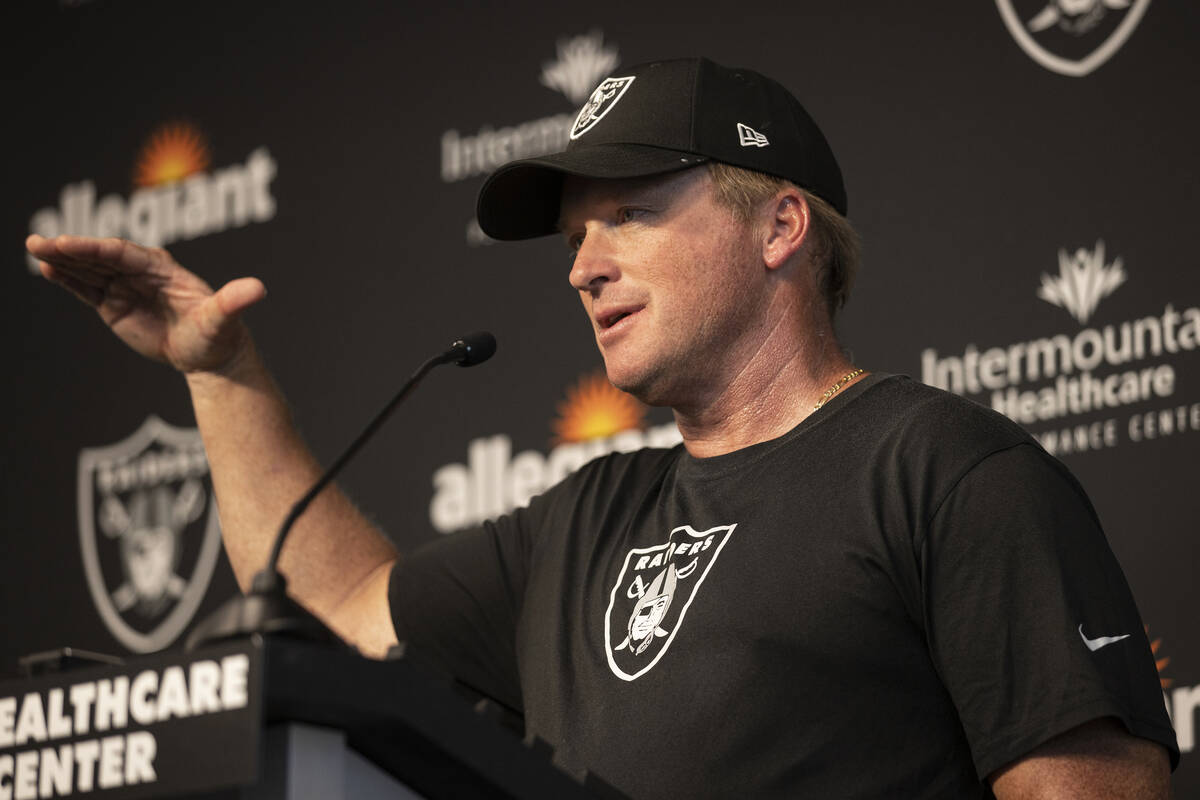 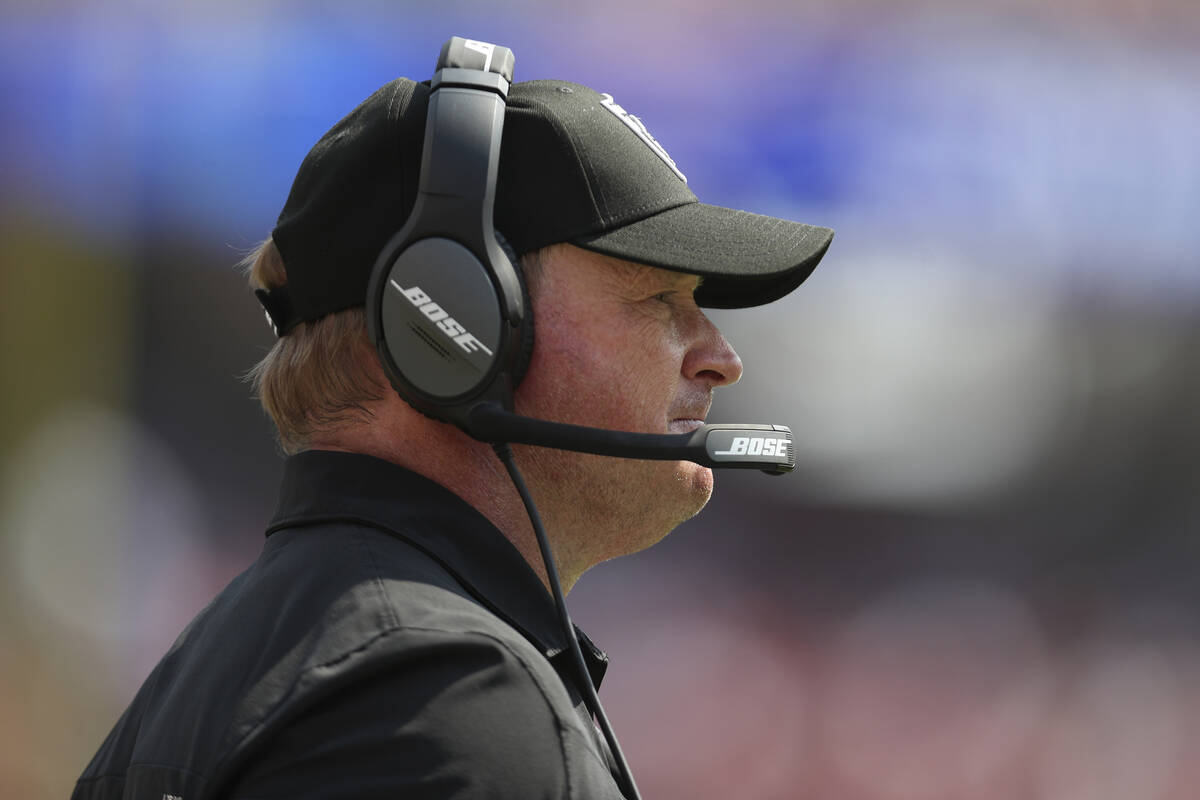 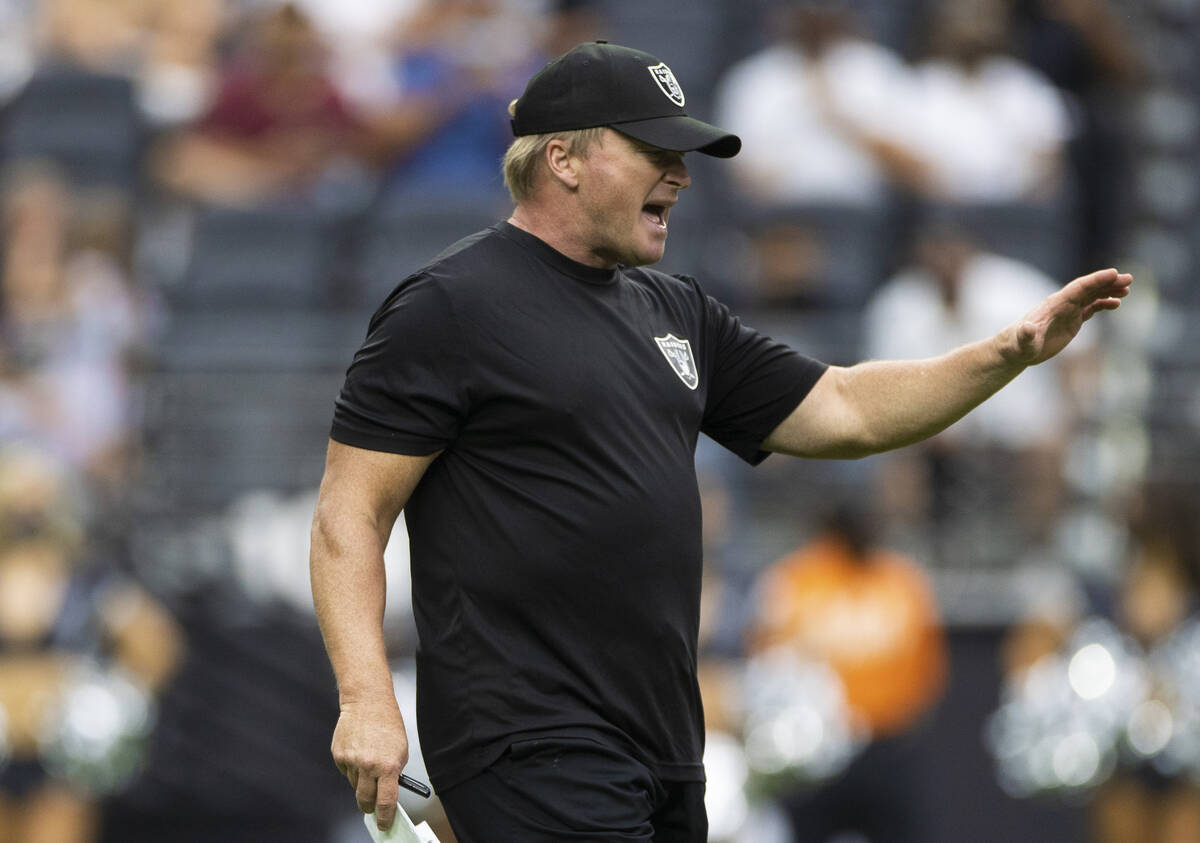 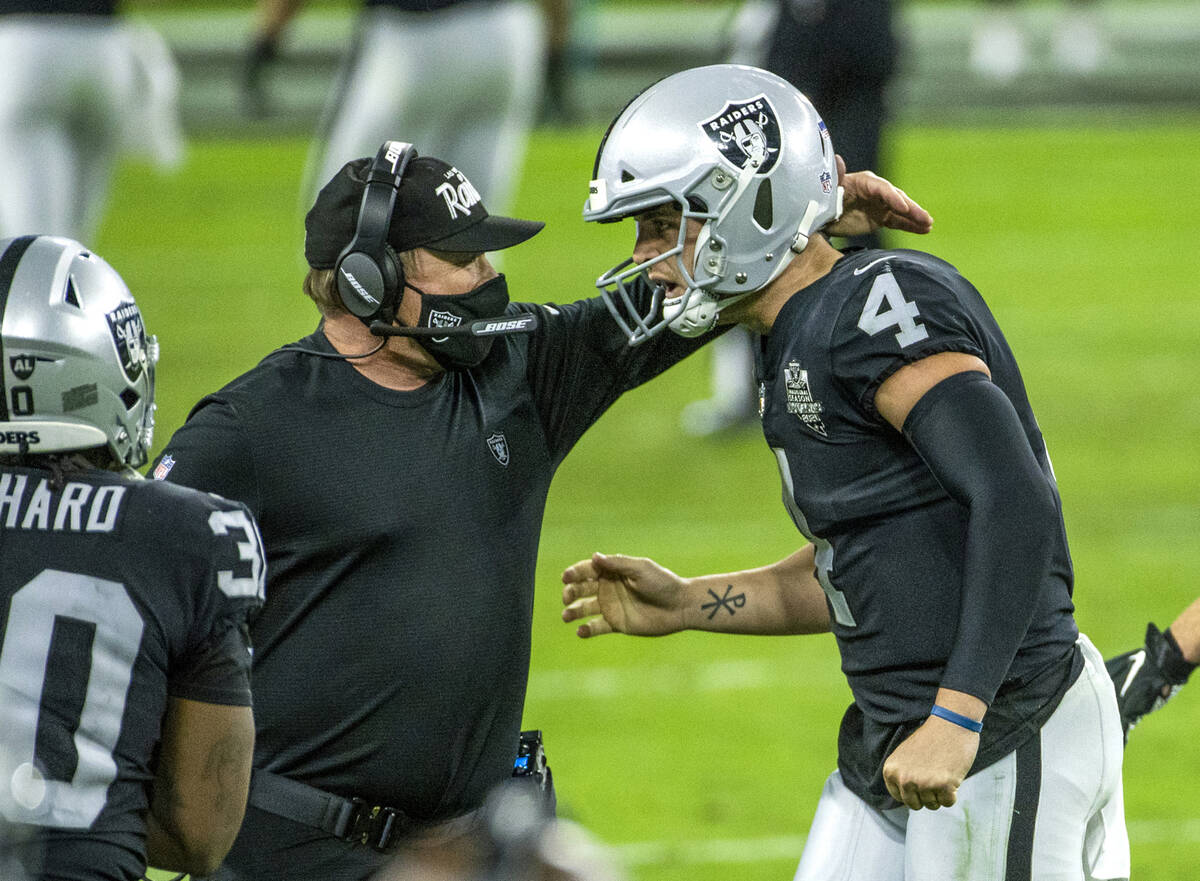 Expectations are rising as Jon Gruden heads into his fourth season with the Raiders.

It hasn’t been the smoothest of rides since he returned to the franchise that gave him his first head coaching job. The rebuild he was entrusted with has produced only moderate improvement over the last three seasons.

He has been busy, methodically overhauling the roster and overseeing the move from Oakland to Las Vegas in the middle of a pandemic, all while resisting the urge to go for the quick fix and remaining committed to his plan.

As the Raiders get set to open their second season in Las Vegas, they have their best roster, on paper, since Gruden returned.

He sat down Monday with Review-Journal beat reporter Vincent Bonsignore for an exclusive one-on-one interview, which has been edited for clarity and length.

RJ: You’ve been described as having a maniacal obsession with winning, but the team you took over obviously needed a lot of work. How have you been able to manage remaining true to your process while also having an obvious desire to win ASAP?

JG: It’s easy to say you want to win and you’re maniacal about winning. So is Urban Meyer. So is every other coach. It’s going to be a challenge. We knew that. We had to build a team. We had to change cities. There was a coronavirus that came along. The salary cap went down. So sometimes the things you want to do are a little harder than you imagined.

We changed general managers. Now we have a new president. There’s a lot of things you have to deal with that are out of your control. But we’re getting better. All I can concentrate on is getting better and positioning ourselves to win. I think we’ve got the players to do it. But it’s been a grind.

RJ: You’ve brought up rising expectations. General manager Mike Mayock has talked about the playoffs. Is that a sign things are headed in the right direction, that it’s now OK to talk about those things?

I’ll be honest with you, I haven’t seen any of these players play, because of the preseason. You’re damned if you do, damned if you don’t on that, too. I’m excited to see what sprints out there on Monday night.

RJ: Do you feel any additional pressure going into this season?

I don’t really feel pressure. Mark Davis is going to let me know if it’s good enough or not. And I know what’s good and what isn’t. I’m 58-years-old now, and I’m not working any less than I did when I was 38.

So I’m doing the best I can. I’m proud of the results we have gotten, but also realistic. I know what’s at stake. But I’m not going to worry about it.

RJ: Have you enjoyed the last four years, the rebuilding process?

JG: You always enjoy it. To keep things in perspective, a coach really has to develop players. No matter who you can get, or who you want. This is not fantasy football.

The big thing is, whether it’s the general manager, the assistant coach, the head coach, the scouting department, the salary cap guy, the owner.

RJ: Speaking of the quarterback, when you took over the Raiders everyone had Derek Carr on the first bus out of town. Yet four years later, here he is. Was that the plan all along or did he earn that along the way?

JG: I came out of retirement, or whatever you call it, to coach this guy. I think he’s pretty good. I think he’s going to continue to get even better. If we can play better defense, if we can get more possessions, if we can get a turnover every once in a while and good field position, that would be really helpful to any quarterback.

No offense to Tom Brady, but they’re the No. 1 defense in the league. That helps when you’re a quarterback. They don’t remember all your three and outs. So I think the better we get on defense, the better our football team gets, the better he’ll play.

But I’ve been accused of a lot of things. Not liking Derek Carr. Not liking young players. Again, I don’t have time to worry about it, you know what I mean?

RJ: As it relates to the offense, Henry Ruggs and Bryan Edwards are a couple of young receivers that need to take steps forward. How have they looked?

With Henry, you have to remember the name Cliff Branch. Pro Football Focus wasn’t around then to say he only had 50 catches. But he ripped the stinkin’ deep end of the coverage off. And it was better for Dave Casper and Fred Biletnikoff.

Part of the reason Waller has explosive plays is because of Ruggs. He’s a threat with or without the ball. And I believe Bryan has a chance to be a special player. He’s got to stay healthy. And I don’t want to discount Hunter Renfrow or Zay Jones or Willie Snead. We’re going to use them all.

RJ: The defense was among the worst in the NFL last year, and your priority this offseason was to address it. Without the benefit of seeing it on the field yet in a game, how do you feel about things on that side of the ball?

JG: Pretty good. I think everything starts upfront. Now, we lost some players up front on offense, and that wasn’t by design either. We obviously needed some salary relief to get to $180 million, and we also needed to create some money to go get some players.

Johnathan Hankins was unsigned. We needed to go get Yannick Ngakoue. You know that Maxx Crosby is on the rise. You want to go get Quinton Jefferson, Solomon Thomas, Gerald McCoy. Darius Philion.

There’s some guys right there that have a history of being inside rushers. We haven’t had a history of rushing the passer, inside, at all. I don’t care who you’ve got outside. So I feel much better about the front.

I feel really good about our secondary coach (Ron Milus). He’s developed a lot of good players. I think the addition of Casey Hayward gives us a guy that the young kids can look at and say, ‘OK, that’s how you do it.’ Our linebackers, getting Denzel Perryman, getting K.J. Wright, will be an asset to us. And hopefully Corey Littleton and Divine Diablo and some of the young guys continue to get better.

RJ: You also added Gus Bradley, your old friend from Tampa Bay, as the defensive coordinator. It almost feels like he was someone you wanted on staff when you first got here.

JG: I remember when we hired Gus in Tampa, after losing Rod Marinelli to the Detroit Lions, and he took his son-in-law Joe Barry, our linebackers coach, to be his defensive coordinator. So I had to replace two of my defensive guys.

So Monte Kiffin and I must have interviewed 30 guys. Pro guys. College guys. We interviewed a bunch of guys. Somebody has to come in here and coach Derrick Brooks, who’s in the prime of his career. You don’t want to just bring in anybody.

And the guy that knocked our socks off was from North Dakota State. His communication, his knowledge, his passion for the game. His charisma. I had to have him. And hell, I hire him, and I get fired a short time later. I turn around he’s a Super Bowl champion with the Seattle Seahawks and the head coach of the Jacksonville Jaguars. Players like him. They respect him. And most importantly, and I think what people don’t realize is, he has his whole staff with him. So when you come in here and install your No. 1 signature coverage, you don’t go downstairs and say ‘Aahh, this guy is full of it.’ You know the linebackers coach, the secondary coach, the d-line coach, they’re all on the same page. They’ve dealt with the AFC West. They know Andy Reid. They know a little bit about Patrick Mahomes. They know the AFC.

So it’s really great to get a guy you know, a guy that knows the division, a guy that has a great staff. So I’m thrilled to have those guys.

RJ: You and Mike Mayock have been together for three years. How is that relationship?

JG: Real good. Real competitive. I think we work well together. I’m not going to speak for him, and we’re not going to agree on everything all the time. But we do, professionally, agree on what decision is made. I appreciate his work ethic. I’m excited about coming in here every day and seeing him. We have a lot of fun. A lot of laughs.”

RJ: Four years into your return to coaching, has anything surprised you?

JG: The rules are completely different. What you’re allowed to do with players. You gotta give them a four-day weekend. You’ve got to be off the field at a certain time. Player safety rules are totally different. It’s very, very different. We’re practicing at 7 a,m. So there’s nothing the same. You have to adapt or die. And I ain’t dead yet. So here I am.