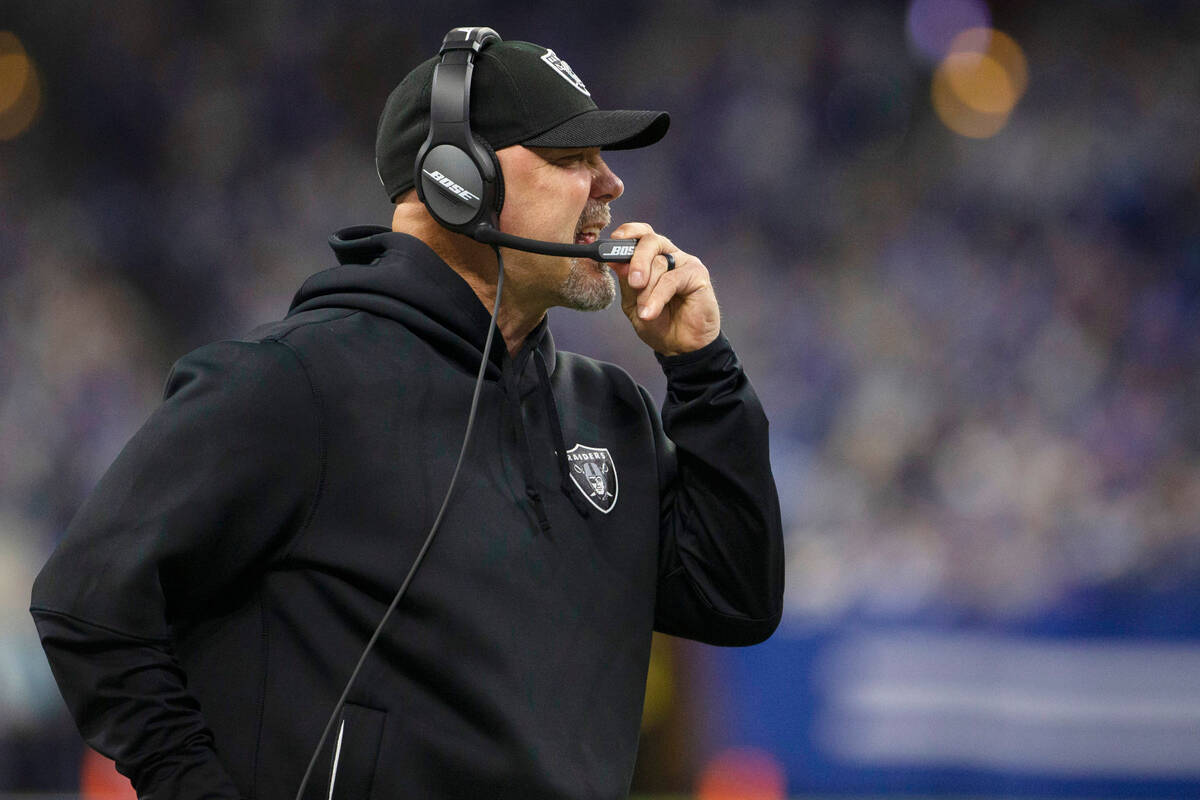 Raiders defensive coordinator Gus Bradley coaches from the sideline during the first half of an NFL football game against the Indianapolis Colts on Sunday, Jan. 2, 2022, at Lucas Oil Stadium in Indianapolis. (Heidi Fang/Las Vegas Review-Journal) @HeidiFang 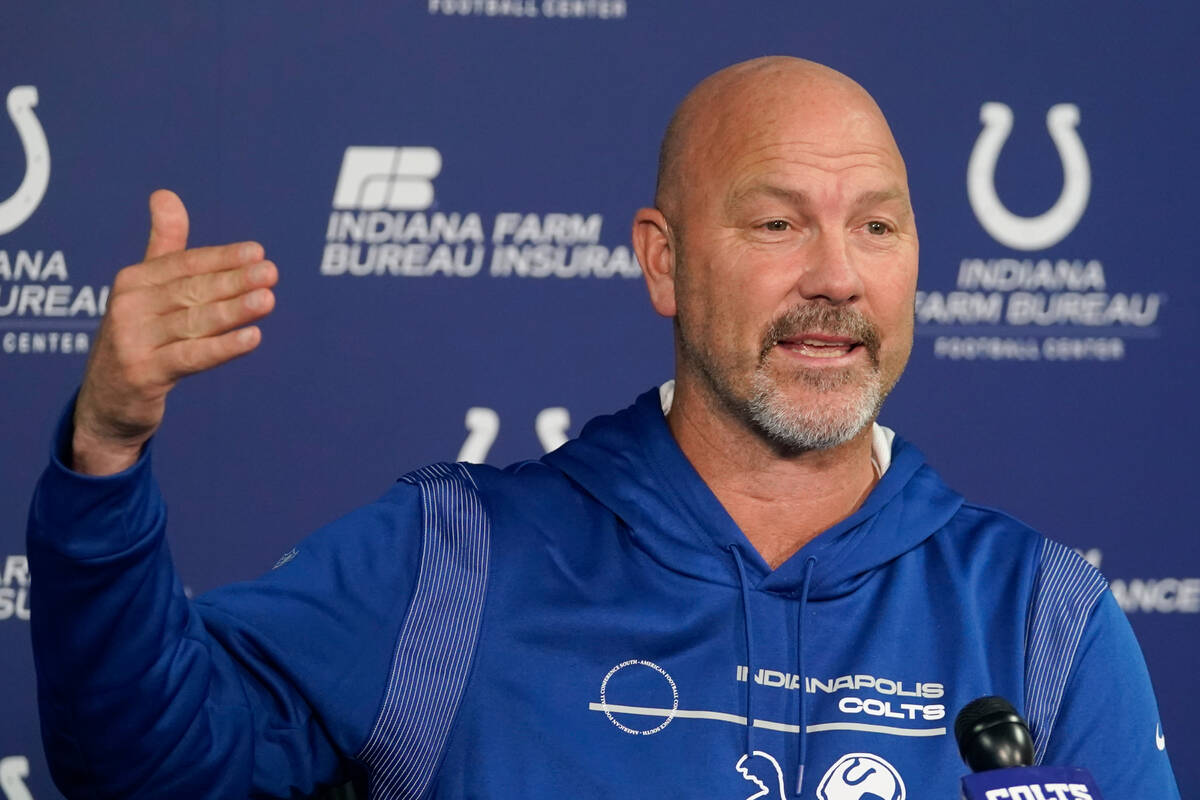 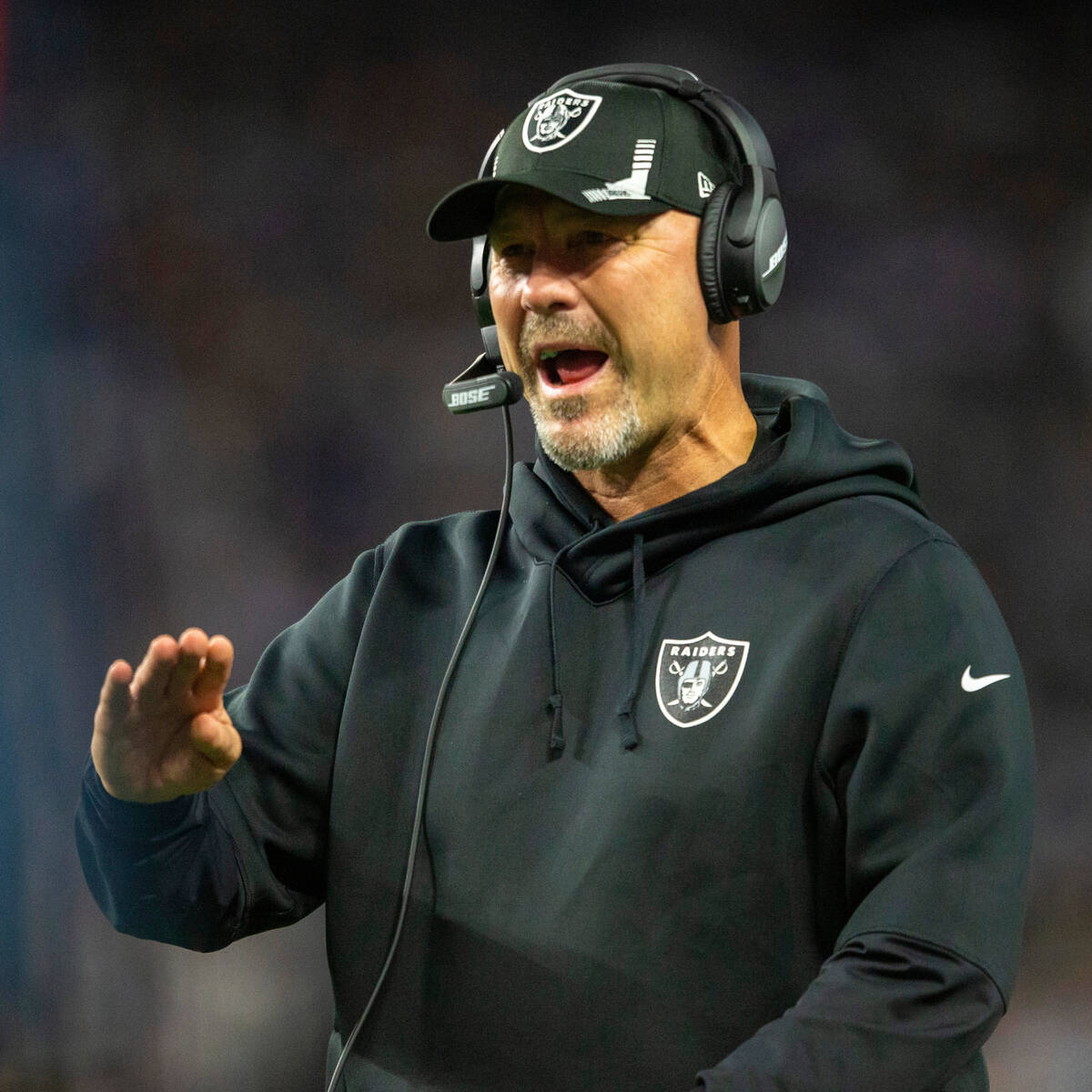 Raiders defensive coordinator Gus Bradley shouts from the sideline during the first half of an NFL football game against the Los Angeles Chargers on Sunday, Jan. 9, 2022, at Allegiant Stadium in Las Vegas. (Heidi Fang/Las Vegas Review-Journal) @HeidiFang

So when Indianapolis hired Bradley as its new defensive coordinator, the Colts’ top defensive tackle was thrilled to start working with the defensive mastermind. Buckner believes Bradley can turn a budding Colts defense into a championship-caliber unit.

“We’re attacking up front. We’re blowing things up, everyone else is pretty much cleaning things up behind us,” Buckner said, explaining the new philosophy. “I like that. It’s controlled chaos.”

For Buckner and the other defensive linemen, it’s been a slight but welcome adjustment.

Former defensive coordinator Matt Eberflus expected his unit to play fast, gang up around the ball and hold each player accountable. The result: He took one of the league’s worst defenses in 2017 and steadily led it to a top-10 ranking in 2020.

After Indy finished second in the league with 33 takeaways last season, the Chicago Bears hired Eberflus as head coach.

When general manager Chris Ballard and coach Frank Reich started searching for a replacement, they wanted someone with a similar approach who could make the defense even more productive.

The 56-year-old Bradley looked like the perfect fit with his preference for turning defensive linemen loose, rather than asking them to read and react.

Bradley coached just one season in Las Vegas, and the Raiders were 14th in the league in yards allowed per game after ranking 25th in 2020. The Raiders were 26th in scoring defense last season, but even that was a slight improvement from the year before when only the Lions and Jaguars allowed more points.

Maxx Crosby and Denzel Perryman were each selected to the Pro Bowl for the first time, with Crosby making 13 tackles, eight for sacks, and Perryman recording 154 tackles (102 solo). Also on the team was Yannick Ngakoue led with the Raiders with 10 sacks.

When the Raiders decided after the season not to keep interim coach Rich Bisaccia, that meant Bradley was out of a job, too.

But Reich had one more move — hiring the affable John Fox as senior defensive consultant. Fox lost two Super Bowls as a head coach, including to Bradley’s Seahawks defense in February 2014.

“Here’s what I appreciate about the way he’s approached it, he’s just there to serve,” Reich said, referring to Fox. “I think that’s working well. Gus is doing a phenomenal job of leading the defensive staff and getting that defense going, and I think he and Fox are developing a great relationship”

They certainly have most of the pieces.

Indy then acquired one of Bradley’s prized pupils, Ngakoue, in a March trade and also added free-agent cornerback Stephon Gilmore, the NFL’s 2019 Defensive Player of the Year.

“We can be something really special,” Leonard said as Indy opened training camp last week. “Nothing is going to be handed to us, we have to go out and prove it each and every week and that’s the ultimate goal.”

Leonard, Indy’s defensive energizer, remains on the physically unable to perform list because of back surgery in June. While he might not play in the preseason, his absence hasn’t held back Indy’s defense.

While quarterback Matt Ryan gets in sync with a new offense, new teammates plus a new and largely unproven group of receivers, the defense has won many practice-field battles at Grand Park.

Ngakoue routinely has shown his speed off the edge while Gilmore has blanketed receivers and broken up passes. Bradley likes the early impressions, especially in the secondary.

“It’s a group that’s kind of building that cohesiveness,” Bradley said. “As you know, Gilmore is not only covering, but you’ve got to be able to tackle him and play physically. To play at the level he’s done, that’s how he plays. I think that’s a good message to all of them.”

The most visible difference has come on the defensive line, where the Colts have struggled to generate a consistent pass rush recently.

Ngakoue is one of three active players with six straight seasons of at least eight sacks. Only Buffalo linebacker Von Miller (seven) and three-time NFL defensive player of the year Aaron Donald (eight) have longer streaks.

Plus, Ngakoue already knows Bradley’s system, having studied it in Jacksonville and Las Vegas.

“Got to flip the switch. It’s every man for themselves out there,” Ngakoue said.

Indy is hoping with Ngakoue operating on the outside and Buckner manning the inside, both players will be more productive and their approach to game will rub off on younger players such as defensive ends Kwity Paye and Dayo Odeyingbo.

Paye and Odeyingbo made some crucial plays as rookie last season. A full and healthy offseason, more intense workouts and some new talent could help them become more consistent playmakers in 2022 while allowing the Colts to take another big step.

“It will be more kind of like we’re on a track, so we’re getting vertical, penetrating a lot more,” he said. “Guys are really embracing the scheme. You’ll see us in the backfield a lot more. I’m excited.”