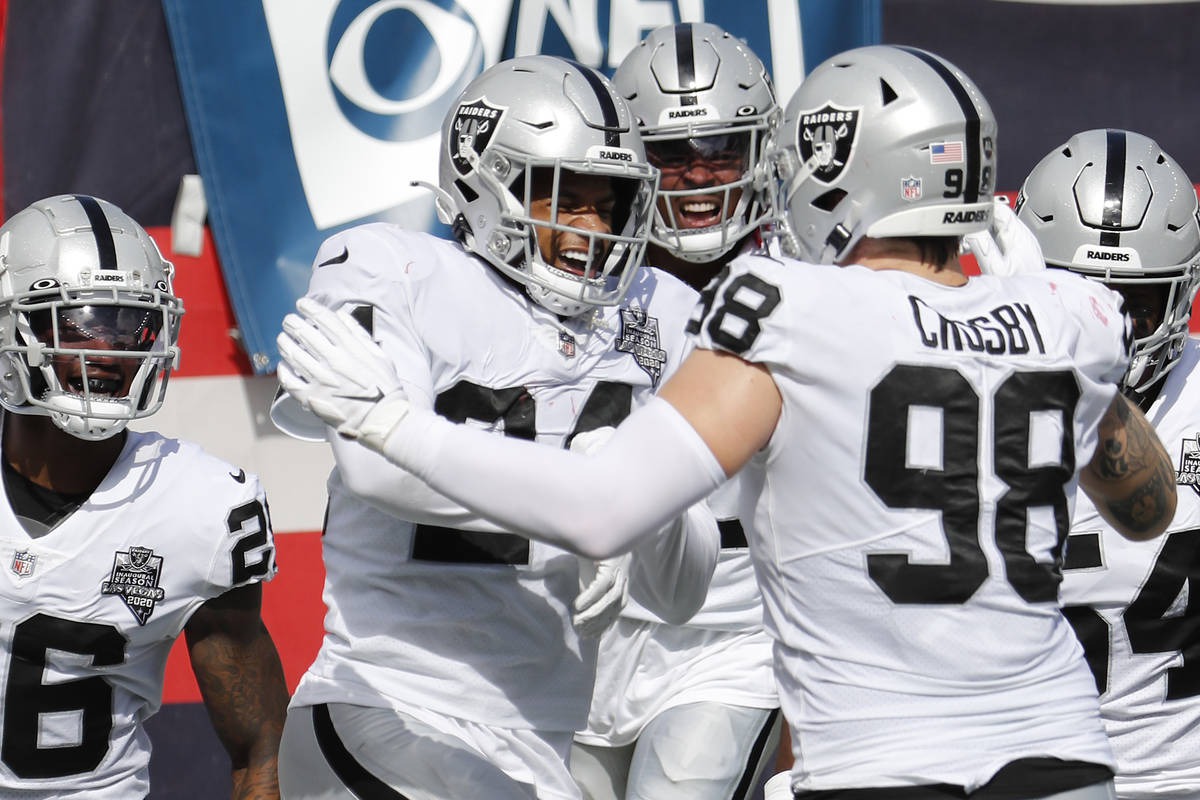 Las Vegas Raiders strong safety Johnathan Abram celebrates after he intercepted a pass and returned it for a touchdown against the New England Patriots during an NFL football game at Gillette Stadium, Sunday, Sept. 27, 2020 in Foxborough, Mass. (Winslow Townson/AP Images for Panini)

Johnathan Abram said before the season that he was going to focus on playing smarter this year, ensuring his availability over the course of 16 games.

So far, so good for the second-year safety.

Abram has played 241 defensive snaps, per Football Outsiders — tops among Raiders defensive backs through four games. He’s also tied for the team lead with 23 tackles and has one of the team’s two interceptions.

The 23-year-old missed 15 games last year after injuring his shoulder in his NFL debut, but said Wednesday that an improved recovery regimen has helped him stay healthy.

“It allows me to play the game the way I play,” said Abram, sporting a cast around his left hand. “But at the same time, (I’m) being a lot smarter with the shots I take.”

Abram is perhaps the team’s most physical and aggressive defender, a trait that inspires his teammates but also lends itself to missed tackles. He has six this year, tied for the ninth most in the league, according to Pro Football Reference.

The Raiders have whiffed on 47 tackles, which are the second most in the NFL to only the winless New York Jets.

“There’s a time where you can take the shot. A real good shot,” Raiders defensive coordinator Paul Guenther said of Abram. “But if you’re in the open field or you’re the last man to the party, whatever it may be, you’ve got to come to balance, track the near hip and tackle the runner.

“There’s two ways of going about it playing safety. I don’t want to take any of his aggressiveness away. He’s just got to understand when he can be overly aggressive and when he needs to get the guy to the ground.”

Guenther decided to coach from the press box inside Allegiant Stadium last Sunday during a 30-23 loss to the Buffalo Bills.

He might do it again this Sunday against the rival Kansas City Chiefs.

Guenther said coaching from the press box helped him secure a better view of the entire field, something he needed to better evaluate the brigade of young players on his defense.

He hasn’t yet decided if he’s going to coach from Arrowhead Stadium’s press box Sunday, but knows he’s in for a challenge whether he’s in the box or on the sideline against Kansas City’s vaunted offense.

“They’re still clicking on all cylinders,” he said.

Running back Josh Jacobs has 37 touches the last two games after totaling 59 touches in the first two weeks. He has 300 rushing yards on 3.6 yards per carry this season. He rushed for 1,150 yards on 4.8 yards per carry last year.

Offensive coordinator Greg Olson said the team remains confident in its ability to run the ball despite its struggles in losses to the New England Patriots and Buffalo Bills.