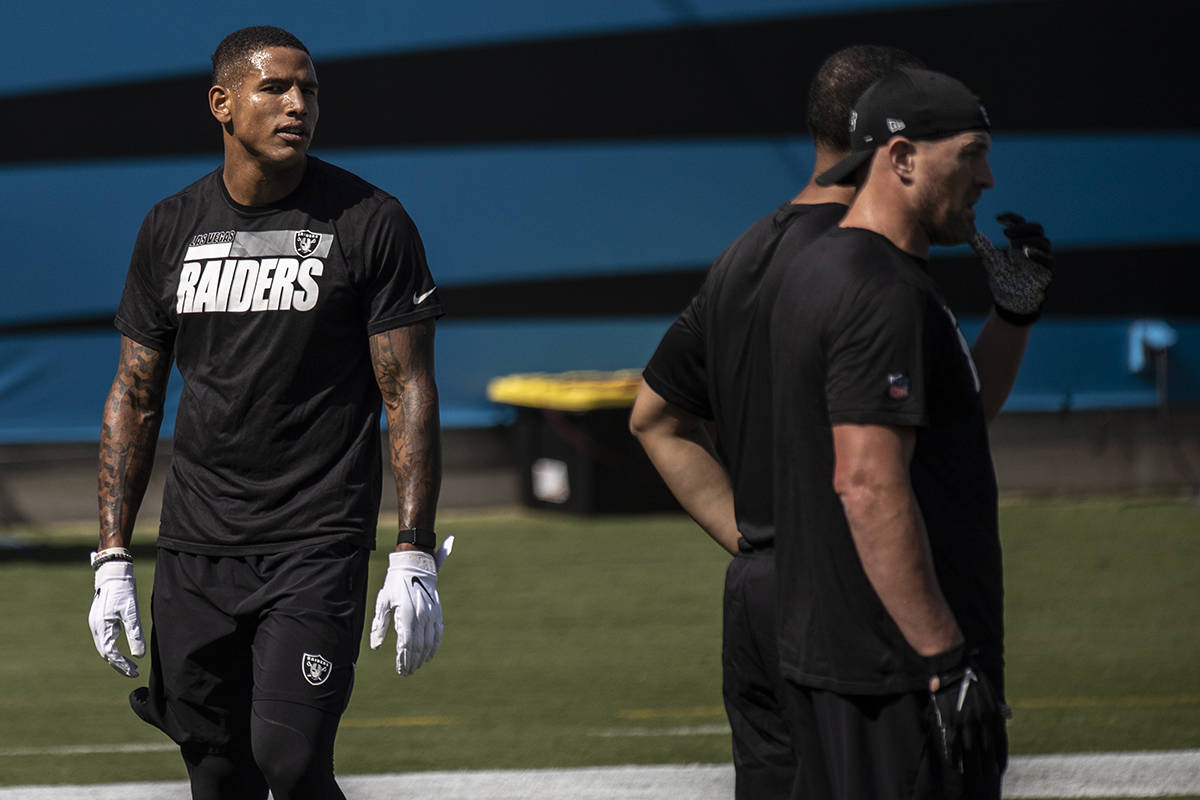 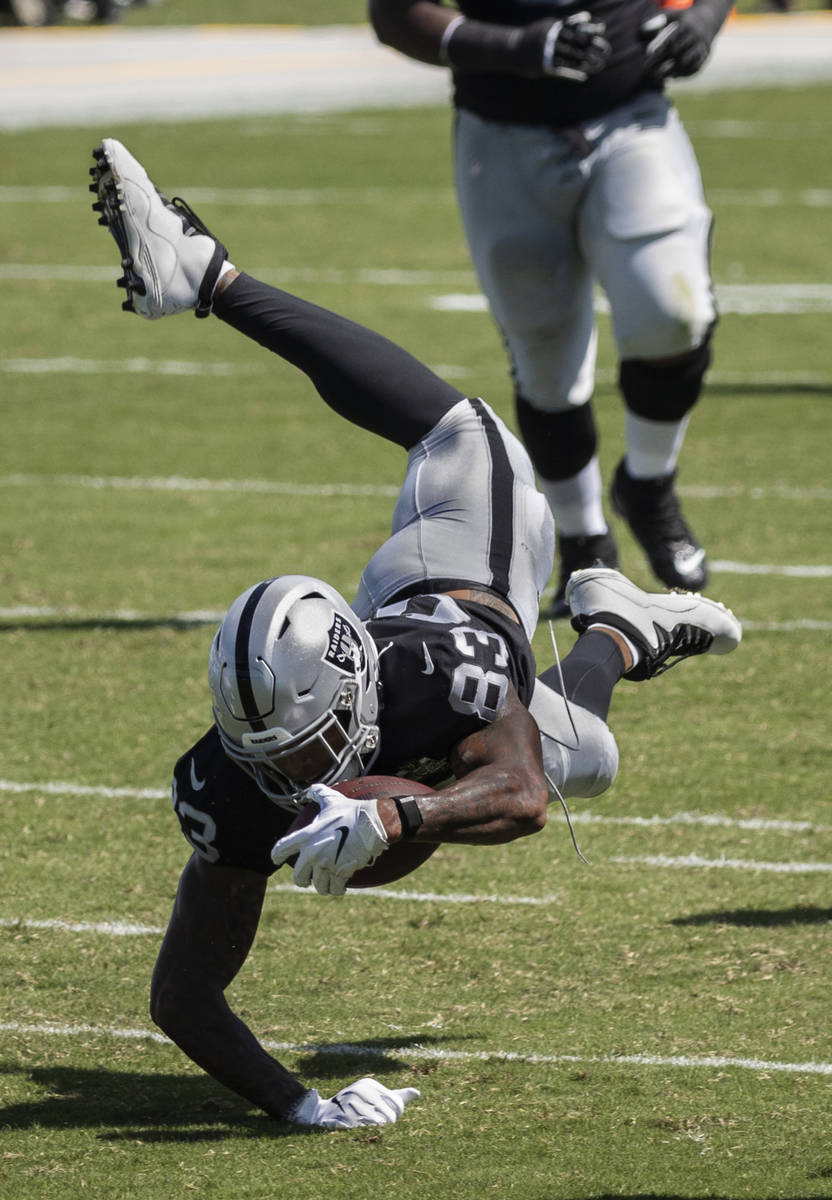 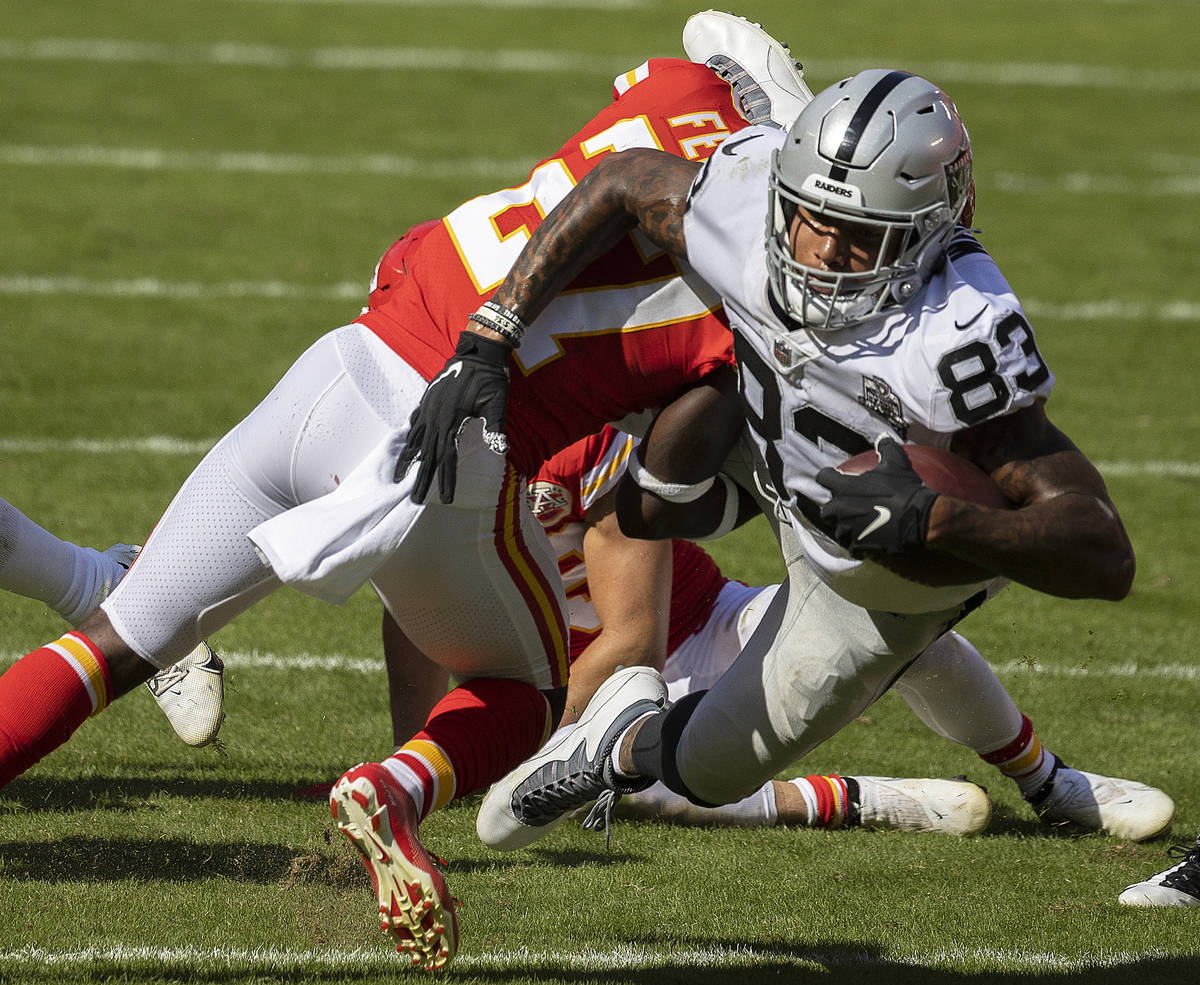 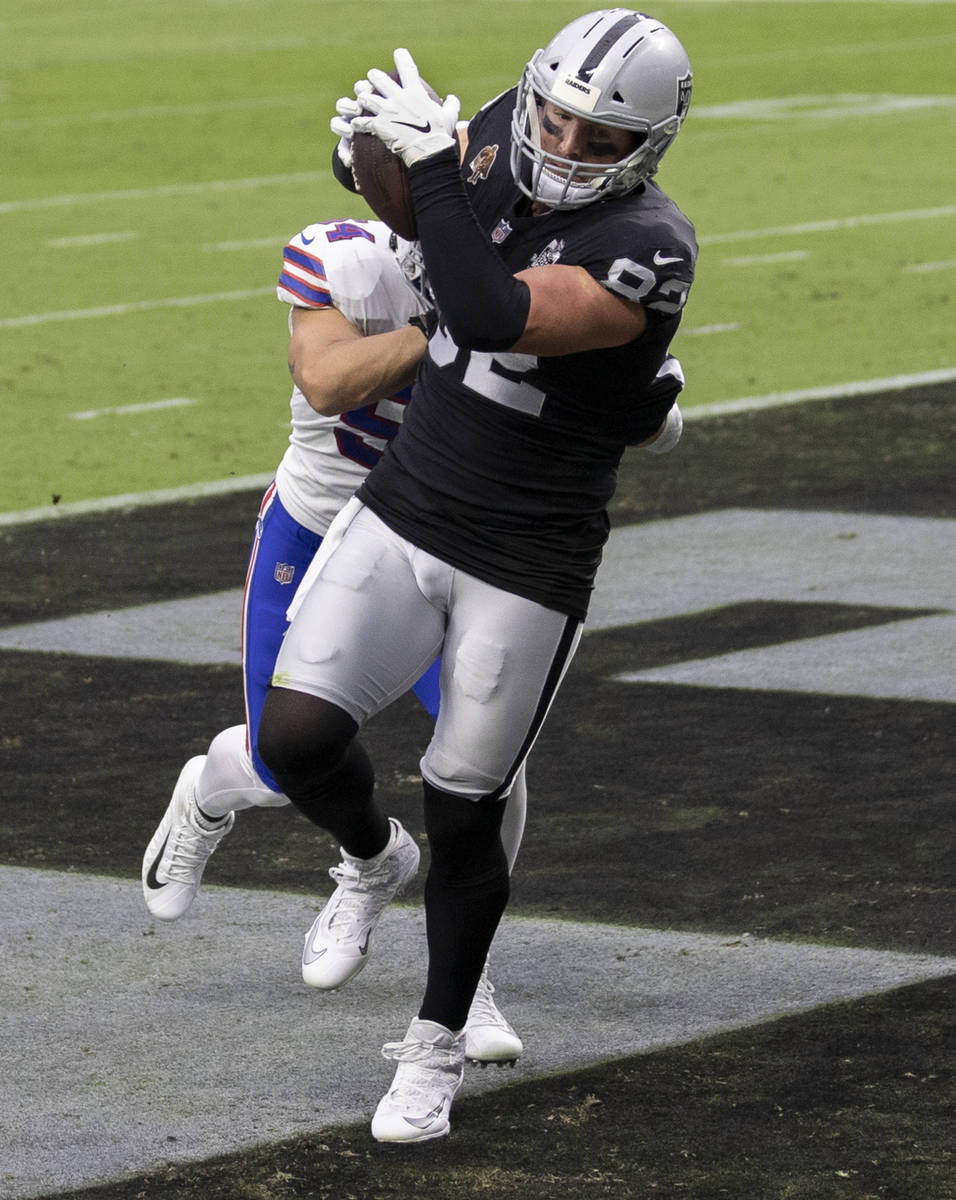 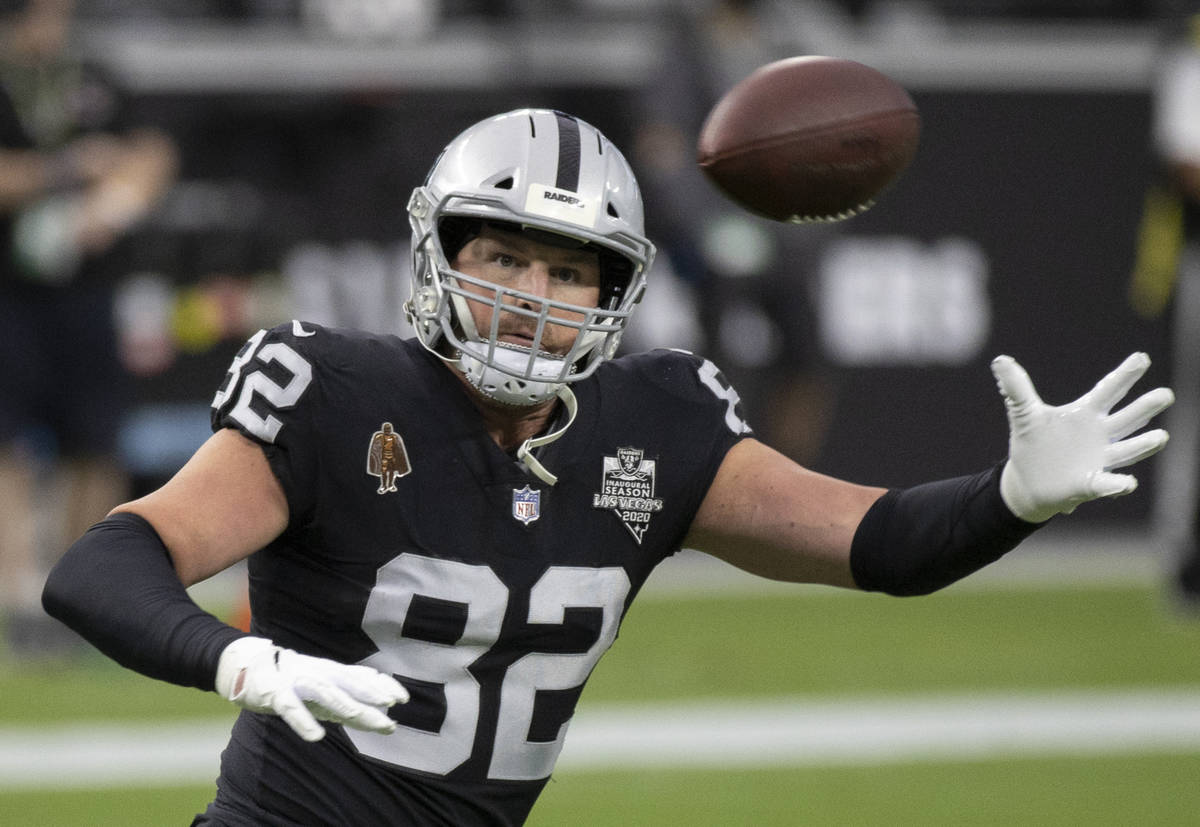 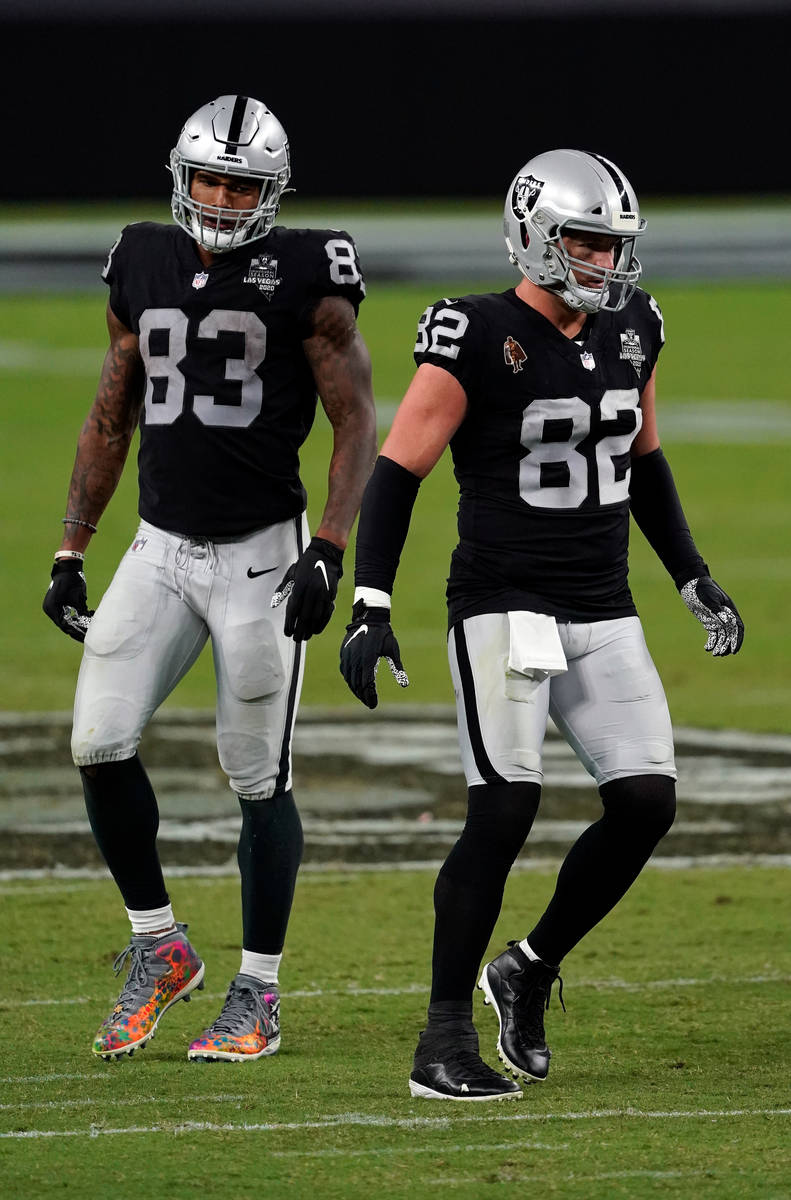 There was a moment when the Raiders’ signing of Jason Witten prompted incumbent star tight end Darren Waller to take a look at the future Hall of Famer’s career stats.

Waller wouldn’t make that mistake again. He quickly realized that was not the standard by which he would want his career measured.

“I was just like, ‘What in the world?’” Waller laughs. “But I don’t look at things from a statistical perspective. I just try to go out there and win my matchup every play and let it stack up. Looking at his numbers will give you anxiety.”

Witten’s presence, however, has brought a sense of calm to the Raiders’ tight end room.

The longtime Cowboys’ star is still going strong at 38 years old, but he is no longer the focal point of an offense with six catches for 29 yards and a touchdown through five games. His impact has far outweighed his numbers.

It didn’t take long after he signed for Waller to realize Witten’s presence was going to be beneficial.

Witten attended some of the informal workouts the team did at local parks and fit in right away.

“He was dropping tips on us, not talking down, in a very helpful way,” Waller remembers. “I could see he wasn’t seeking attention or looking at us a certain way. He was just here to be a part of the group. From there, it’s been awesome.”

Witten has been able to serve as a mentor of sorts for Waller, an emerging star at tight end who is eager to soak up all the knowledge Witten has acquired through the years.

“It’s been absolutely awesome, honestly,” Waller said. “I’ve never seen anyone care so much about the smallest little things on any given play or against any given scheme and I feel like he’s had a great impact on all of us and he came out of his shell pretty quickly and he makes us laugh all the time. He’s just a great presence.”

‘Really rewarding for me’

Witten is fine passing on all the knowledge he has gained, but made it clear when he signed with the Raiders he was doing so as a player. He has backed that up by remaining a solid contributor on a team with playoff aspirations.

“I knew I was taking on a new role and a different one than I’ve had throughout my career,” the Tennessee alum said. “When I’m out there, just like any competitor, you’re trying to win, you’re trying to gain an advantage, you’re trying to help the team by doing your part. So that’s what’s made this really neat and why I think it’s really worked. It’s not this forced thing where you’re brought in to be another coach. It’s just a teammate that’s played a long time and been in a lot of these situations that we can just talk things through. It’s been really rewarding for me.”

“It starts with just being a rare athlete,” Witten said. “Not many people are 6-6 and 255 pounds and can run that way. But I would even take it another step further. It’s not the speed. There’s been a number of tight ends over the last 40 years that can really run. It’s the change of speed and understanding of routes and how you influence that to get yourself open. The (pure speed) guys come and go and it’s really hard for them to sustain success at the tight end position.”

Witten was able to help guide his new protege through some ups and downs already this season.

Waller caught 12 passes for 105 yards and a touchdown in the first-ever game at Allegiant Stadium, a Raiders’ win over the Saints on Sept. 21.

Witten reminded Waller throughout the next week to expect the New England Patriots and famed coach Bill Belichick, notorious for taking away the opposing offense’s best weapon, to have a plan to shut him down.

The result was a two-catch effort for nine yards in a one-sided loss to the AFC power.

“He had a lot of small encouragements for me throughout the game,” Waller said. “There were times I wasn’t open, then other times I was but I didn’t get the ball. He was just telling me things about staying in the game and only focusing on things I could control. He said games like that don’t reflect on who you are as a player because you came to play and you were dialed in and doing what you had to do. He told me to not take it too seriously and understand there will be better days.”

Witten, who holds the NFL record for catches in a game by a tight end with 18 in a 2012 contest, has seen it all. He is fourth in league history in receptions and has the record for most consecutive games played by a tight end.

Witten also had the benefit of having strong mentors when he first entered the league in 2003. Veteran Dan Campbell, who’s now the tight ends coach for the Saints, took Witten under his wing. But it was coach Bill Parcells who really helped shape Witten.

Witten hoped he could be the next in a long line of tight ends to succeed under Parcells, from Mark Bavaro with the Giants to Ben Coates with the Patriots and several in between.

“When a coach with that kind of experience singles you out and believes you can do it, and kind of teaches you week in and week out, it’s really neat,” Witten said.

He also credited quarterback Vinny Testaverde, who like Witten, was still playing at a high level while imparting knowledge on younger teammates.

“I felt like he had all the answers to the test,” Witten remembers. “He’d seen every coverage and every blitz and it really helped my confidence to play at that level I’d hoped I could play at. You have to pay that forward. I think that’s what makes this game special.”

Still, the pupil has to be willing to listen to the advice. Witten credits Waller for not resting on the laurels of his breakout season and instead being very receptive to what he has to share.

Much of that advice is very subtle. He pointed out to Waller taking one step wider when he’s lined up at the point of a bunch set would allow him to clear the line free without taking any contact from a defensive end.

“It’s neat because there’s nothing he can’t do, so when you pass something along, you watch him and think, ‘Man, he does that better than I ever did it,’” Witten said.

The expertise Witten brought to the team wasn’t a surprise to Waller. While he grew up playing receiver and looking up to guys like Calvin Johnson, he had an appreciation for how good Witten was as a tight end.

So Waller immediately knew he could learn a lot from his new teammate. What he didn’t expect was how strong a bond they would form so quickly.

“When you’re in a room with guys that much, you definitely form a relationship and really get to know someone so you expect that,” Waller said. “But I didn’t know he would be this funny and this outgoing. I thought he was a serious guy and all about the game, but he doesn’t take himself too seriously. That’s what I respect about him.”

The feeling is mutual.

Witten was well aware of the talent Waller possessed. He said tight ends always keep up on the emerging stars at the position and it’s impossible to ignore a 6-foot-6, 255-pound athletic freak who puts up 90 catches for 1,145 yards in his first full season like Waller did last year with the Raiders.

Witten has been blown away seeing that talent up close. He’s been even more impressed getting to know Waller as a person.

“Line one for me of the Darren Waller bio is that he’s incredibly humble,” Witten said. “He’s very kind and so appreciative of every opportunity. He’s self-driven and very determined. It’s one thing to be so talented, it’s another to go work your tail off every single day to get even better. That humility is what has stood out to me since day one. He’s very gracious with his time and what he’s overcome to be able to share his story and make a difference for maybe somebody who is in the same shoes he was in a few years back.”

Waller is equally as effusive in his praise of Witten, but he doesn’t necessarily want to follow in his footsteps in terms of longevity.

“As of right now? No,” Waller said definitively about whether he wants to play until he’s 38. “Just because of how much of a roller coaster it’s been for me already. I was drafted five years ago and it’s been just a lot. Every day, I’m like I don’t know how he does this every day and he’s still here and beating guys.

“Maybe my mindset will change as time goes along, who knows, but it just seems like something not everyone can do.”

Witten is a rare exception whose productivity and longevity will one day land him in Canton, Ohio. His mission now is to show Waller the path that could take him to that same destination.