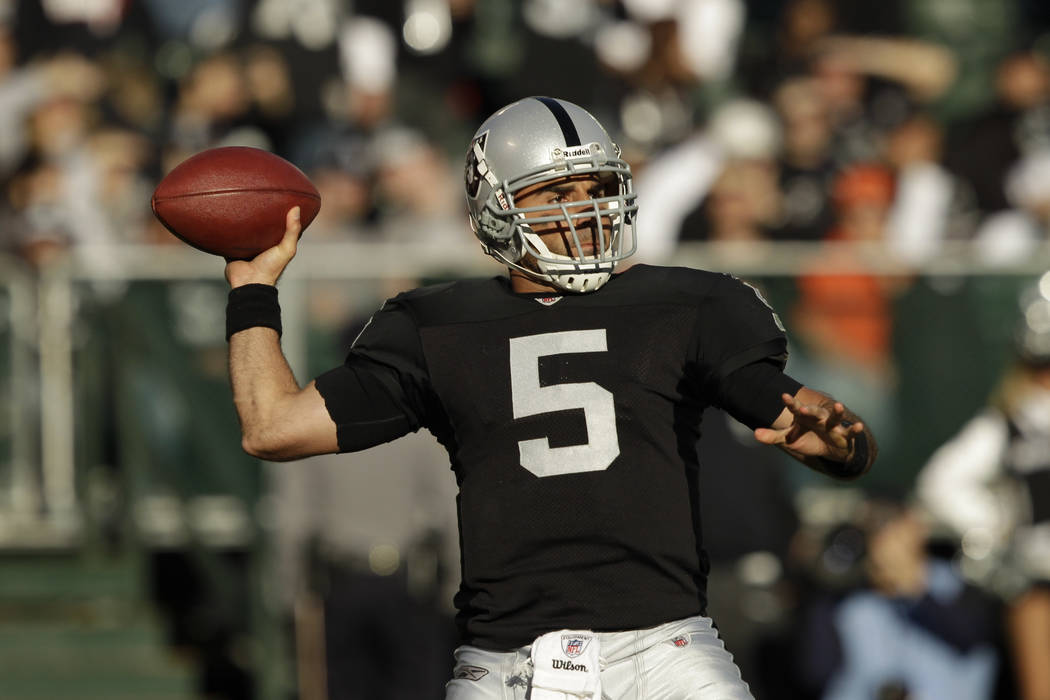 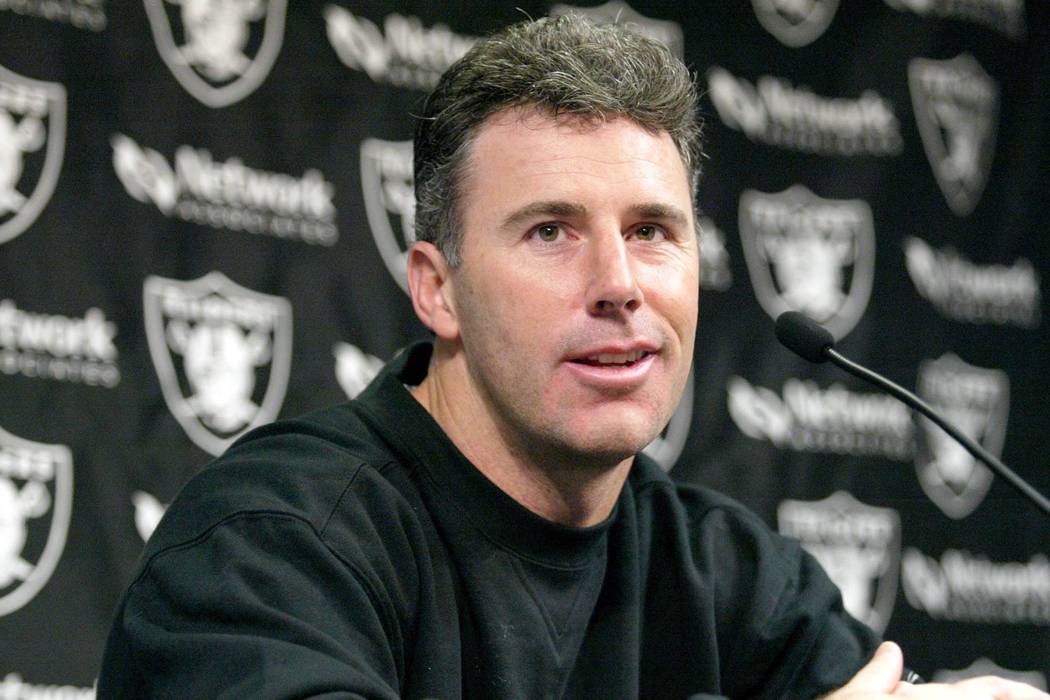 CARSON, Calif. — By the time Rich Gannon joined the Raiders in 1999, he had pretty much seen it all. Or so he thought. But that was before he crossed paths with Raiders head coach Jon Gruden.

The relationship that developed between the 36-year old Gruden and Gannon, who by that point was an 11-year NFL veteran, wouldn’t just lay the groundwork for some of Gannon’s best seasons. It also offers a glimpse into what it’s like to play quarterback under one of the most offensively hands-on head coaches in the NFL.

“It takes a special guy to play for him,” Gannon said. “Because he’s so intimately involved. He’s so passionate. And if you don’t have that same passion and drive, it’s not going to work.”

It isn’t just the detailed, handwritten quarterback tip sheets that Gruden meticulously draws up, illustrating everything an opposing defense will do, down to the most precise detail and situation, along with the exact counter plays.

It’s how Gruden commands meetings while poking and prodding and challenging his quarterbacks to mentally keep up, while also encouraging them to contribute to the process.

“He knew the importance of the quarterback liking and being comfortable with a certain concept or play,” Gannon said. “I mean, at the end of the day, if the quarterback doesn’t like it, why run it?”

Gannon always prided himself on his thoroughness and passion. But under Gruden he was being managed and taught and empowered like never before.

“He had these infamous quarterback tip sheets that were incredible,” Gannon remembers. “You’d get them on Wednesday mornings, and they basically covered the opposing team’s defense in a nutshell. … Here’s what we want to take advantage of. Here are the matchups we want to go after. In this particular front and coverage, this is the audible we want to get to.”

And that was just on day one.

“On Thursday he’d have a nickel tip sheet for you,” Gannon continued. “Then on Friday, you’d have the Red Zone tip sheet.”

The meticulously detailed and handwritten breakdowns covered the most deployed fronts, coverage looks and blitz calls of the opposing defense, based on field position and down and distance, along with the specific plays Gruden felt would work against each of those factors.

“And it wasn’t like he’d just say ‘it’s an over SAM strong safety blitz.’ He’d have them all drawn up in his own handwriting,” Gannon said. “I’d never seen anything like it.”

Hence, the light that went on as Gannon approached the line of scrimmage during a game against the Dallas Cowboys early in his tenure with Gruden.

All week Gruden had drilled into Gannon that at some point in the game, then-Cowboys defensive coordinator Mike Zimmer would line Dallas up in a defensive look that indicated a specific pressure. Gruden had a precise play designed to beat that look, and he continually reminded Gannon to audible into it.

“And I want you to stick it right up their [expletive) with it,” Gannon recalled Gruden telling him.

Sure enough, at one point in the game Dallas shifted into the look Gruden predicted. As instructed, Gannon checked off to the audible.

From the sideline, though, Gannon could hear Gruden’s voice rising.

“Gannon!!! What the [expletive] are you doing?” he remembers Gruden screaming. “No, No, No!”

Confused, Gannon paused for a second, thinking maybe he read the situation incorrectly. But as he sized up the Cowboys’ defense again, he knew he was right. So he regrouped and continued the audible. Much to the chagrin of Gruden, who was still screaming at him from the sideline.

In fact, some Raiders offensive linemen began quizzically looking back at Gannon, who by this time was colorfully gesturing to Gruden to pipe down.

Gannon trusted his instincts. More importantly, he was leaning on the intel and instructions Gruden had drilled into him all week.

The result was a big completion to set up a Raiders touchdown. In other words, exactly what Gruden knew would happen. Gruden was grinning, but also apologetic, as Gannon returned to the sideline.

What ensued is a word to the wise — or in this case to Derek Carr and the next young quarterbacks to work under Gruden.

“Know your stuff” is how Gannon put it.

Or, as Bruce Gradkowski, who played for Gruden from 2006 to 2007 with the Tampa Bay Buccaneers, explains. “Be demanding of yourself to mentally learn it all. Because you will be mentally challenged every single day. But at the end of the day, also trust yourself and what you learned and don’t be afraid to go make plays.”

In the first meeting Gradkowski had with Gruden upon being drafted by the Buccaneers in the sixth round out of Toledo in 2006, his new coach essentially told him to erase everything he knew about playing quarterback.

“I’m going to restore a new tape in your brain,” Gradkowski remembers Gruden telling him. “And he did.”

Like Gannon, a tough kid from Philadelphia, Gradkowski was a product of gritty Pittsburgh. Their upbringings were perfectly suited for the excitable and detailed Gruden, who wears his passion on his sleeve and demands the same from his players. Specifically, they became quarterbacks who were an extension of their coach.

“You had to be on every day, every moment, especially in his office,” Gradkowski said, “A lot of verbiage. But I loved it, because he’s such a good teacher. And for me, as a rookie, I didn’t want to get into a huddle with veterans like Mike Alstott and Joey Galloway and stumble over my words calling the play.”

Gannon and Gradkowski both said Gruden doesn’t have much patience for quarterbacks who can’t keep up.

Just ask the poor Raiders rookie quarterback who will go unnamed who Gruden quizzed the day before a preseason game. The questions went from somewhat difficult to relatively easy, but the rookie kept tripping over himself trying to come up with the right answer. Gannon, sitting nearby, had a sinking feeling as his young teammate squirmed under Gruden’s withering gaze.

“Gruden was beside himself,” said Gannon, himself no stranger to Gruden’s wrath.

The next day, Gruden approached Gannon, incredulous with the rookie quarterback’s lack of knowledge.

“Can you believe this (expletive) comes into my meeting and doesn’t know what the [expletive] we’re doing?” Gannon remembers Gruden asking. “(Expletive) it. I’m not going to play him.”

Even for the mentally strong, there can be challenges playing for such a demanding coach.

Upon taking over for an injured Chris Simms during his rookie year, Gradkowski got off to a fast start. But somewhere along the line the balance he always managed between carrying out the game plan but also playing instinctually and improvisationally got out of whack.

“I started questioning myself. I started overthinking things,” Gradkowski said. “Instead of being out there saying I know what I should do against certain coverages, I was thinking what does Gruden want me to do? And that’s where it hurt me. I wasn’t just playing. I felt like I had to be perfect.”

Gruden is going to be hard on his quarterbacks. So when he “starts getting in his little tantrums and stuff like that … you gotta let it go in one ear and out the other,” Gradkowski said.

Why is that? Because, Gradkowski said, “if you’re all in, you’re going to end up a better player.”