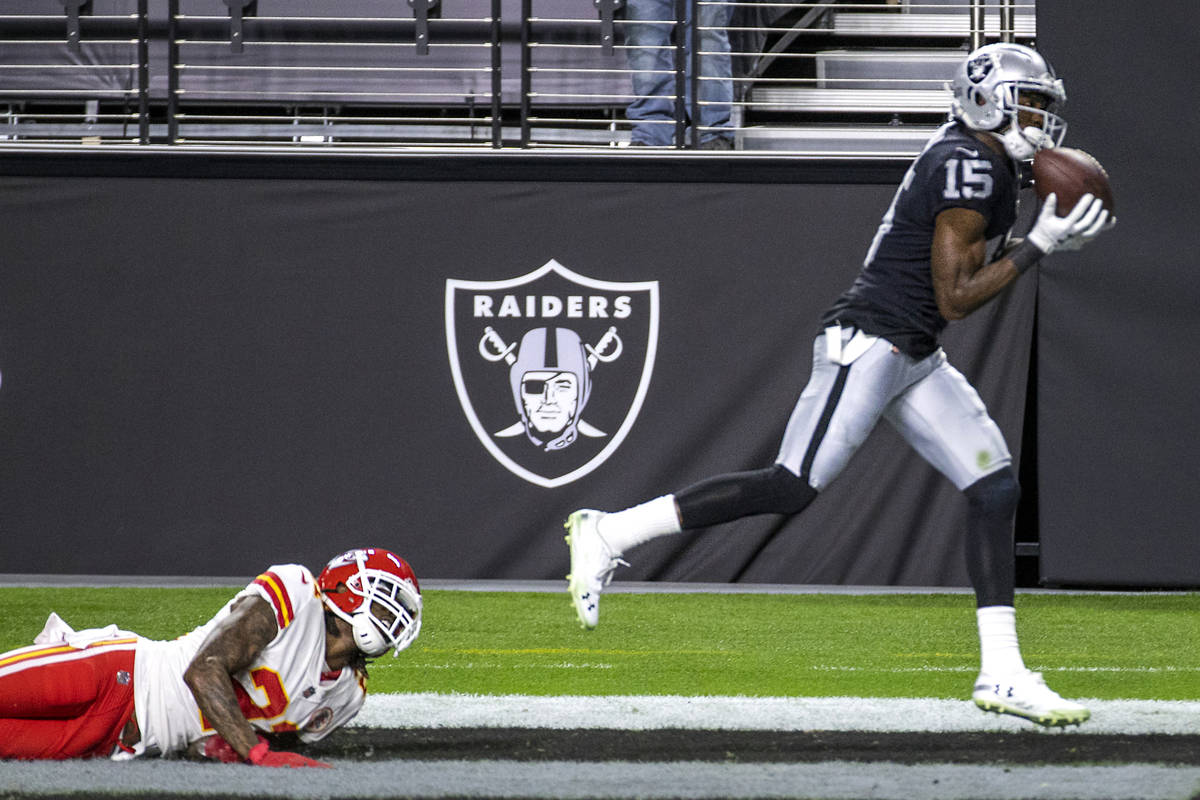 Three takeaways from the Raiders’ 35-31 loss to the Kansas City Chiefs on Sunday at Allegiant Stadium.

Conventional wisdom was the Chiefs would roll into Las Vegas and spend three hours paying back the Raiders for their upset victory and victory lap Oct. 11 in Kansas City.

That certainly wasn’t the case, and the Raiders let the Chiefs know they would be around from the opening drive, going 75 yards on six plays to score a touchdown. The Raiders added another touchdown and a field goal on their two succeeding drives, and Trayvon Mullen intercepted Chiefs quarterback Patrick Mahomes late in the first half to give Las Vegas a 17-14 halftime lead.

The way this game played out was in some ways even more important than the final result. That’s because the Raiders showed again they could play with the NFL’s best, and should the teams meet in the playoffs, Las Vegas would go in knowing — and not just hoping — it could win.

Regardless of how this ends….Raiders are gonna be a tough out in the playoffs

When Raiders quarterback Derek Carr fired into a tight window to tight end Jason Witten for a 1-yard touchdown with 1:43 left, it was the big moment Las Vegas was looking for in the game.

But it also left a lot of time on the clock.

The fact that Mahomes then drove the Chiefs for the winning score, connecting with tight end Travis Kelce on a 22-yard touchdown pass with 28 seconds left, surprised almost no one.

If Mahomes, last season’s league MVP, has shown anything, it’s an ability to play great in the clutch. He did his best work last season in rallying the Chiefs to victories in the AFC playoffs and Super Bowl.

Not only did Mahomes come through in the clutch against the Raiders, but he also played well throughout in completing 34 of 45 passes for 348 yards and two touchdowns f0r a 102.8 passer rating. He did have that one interception late in the first half, but it was a rare blemish.

Mahomes also was rarely pressured, unlike this season’s first meeting when the Raiders got heat on him in the second half. They won that game.

The lack of pressure is a major reason they lost this one.

Until Mahomes’ heroics, Carr had set himself up to be the star of the game, engineering several impressive drives, including the one that gave the Raiders that late lead.

He finished 23 of 31 for 275 yards and three touchdowns, accounting for a 119.7 passer rating. He threw an interception on the final drive, but that was a force he wouldn’t have usually attempted.

The fact the Chiefs rallied to win wasn’t a reflection on him. Carr did what was needed to put the Raiders in position to win.