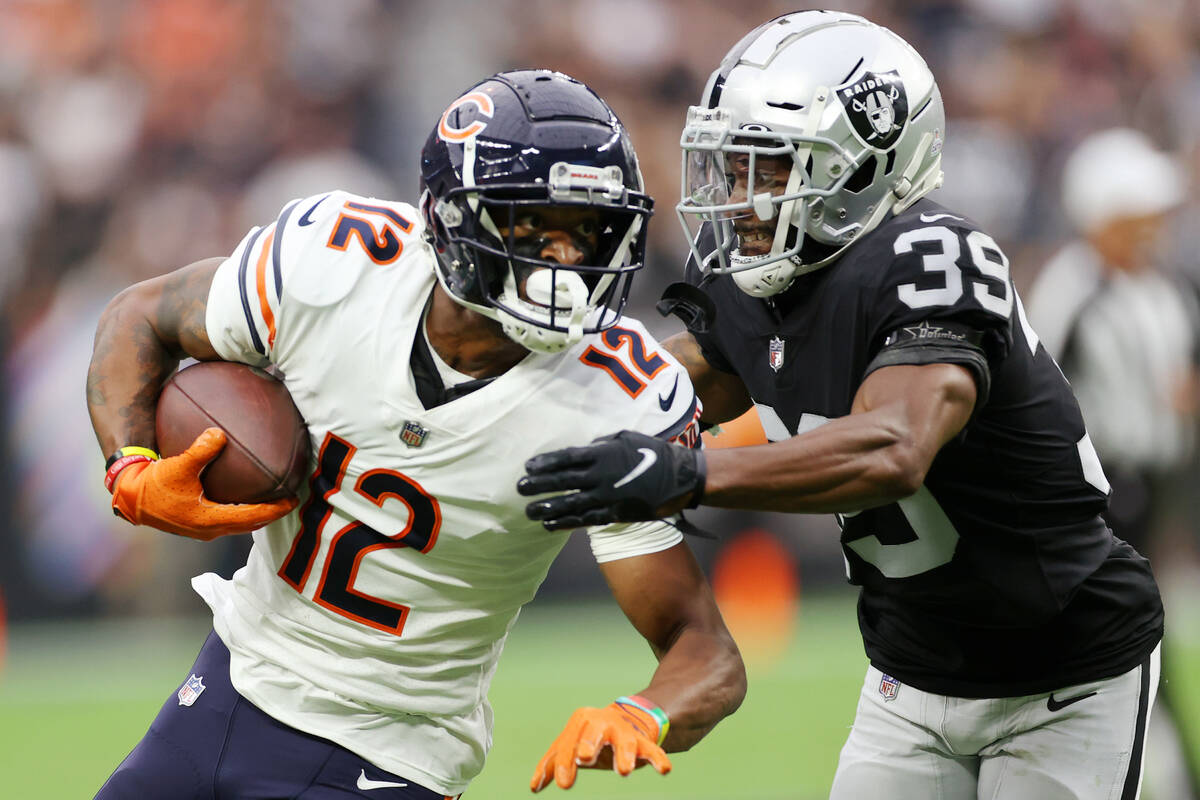 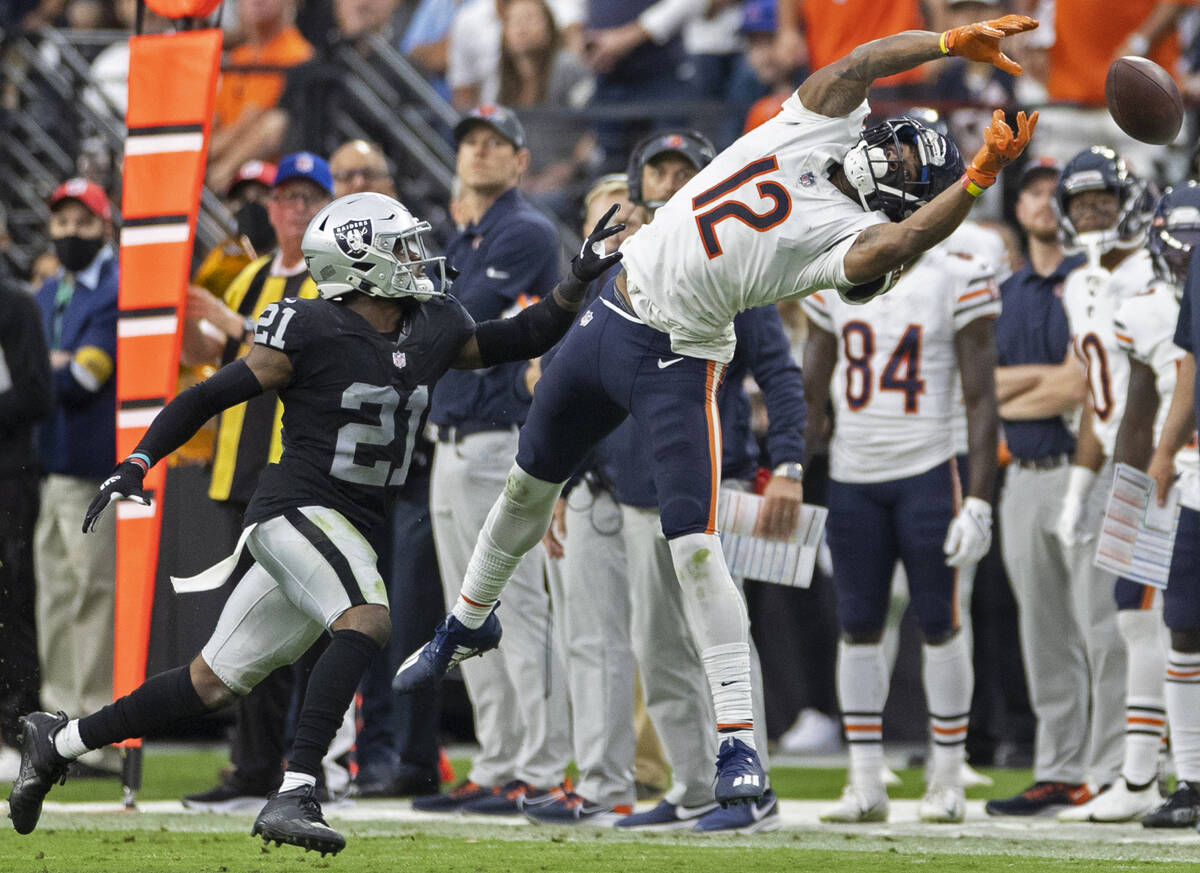 Chicago Bears wide receiver Allen Robinson (12) tries to bring in a catch over Raiders cornerback Amik Robertson (21) in the second half of an NFL football game on Sunday, Oct. 10, 2021, at Allegiant Stadium, in Las Vegas. (Benjamin Hager/Las Vegas Review-Journal) @benjaminhphoto 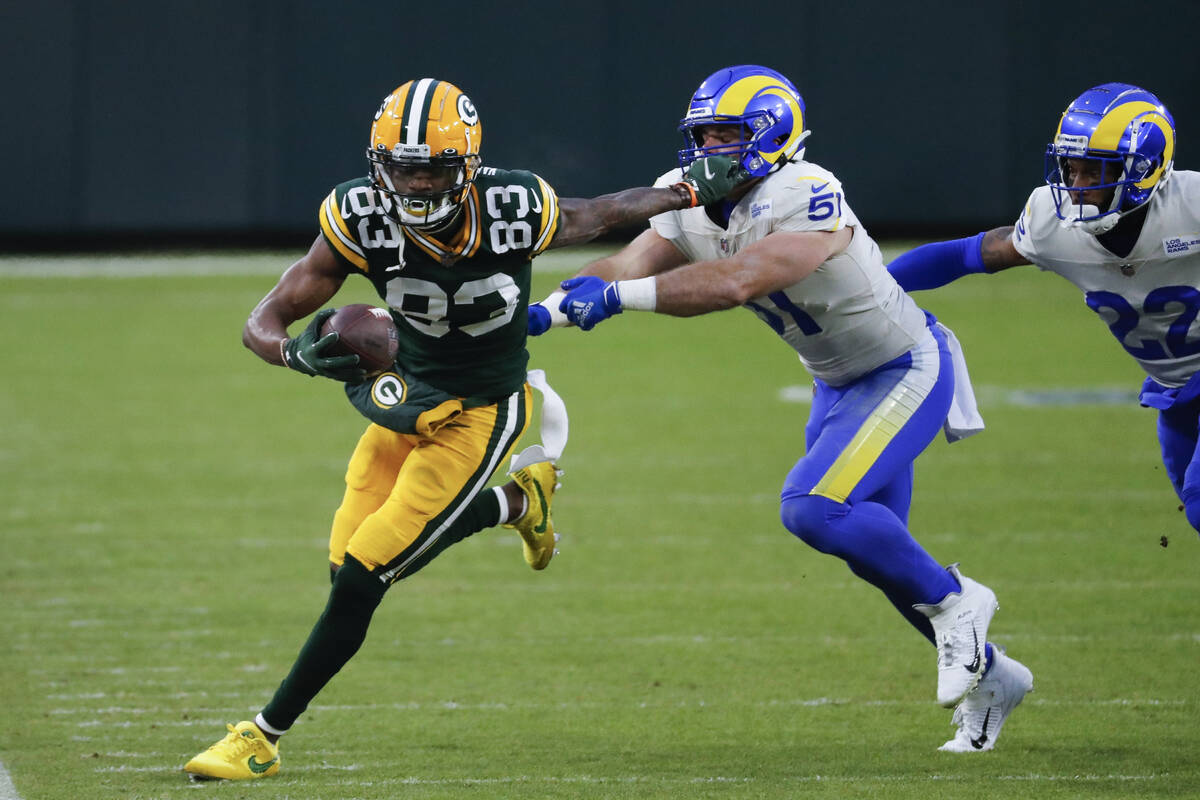 While two of their AFC West rivals jumped headfirst into the offseason by making splashy moves in the free agency and trade markets, the Raiders have opted for a more quiet start to their offseason roster tinkering.

The Chargers and Broncos have made notable improvements in the past week, including Monday’s opening of the legal tampering period, with the Chargers loading up on defense with the addition of game-changers at rush end and cornerback and the Broncos acquiring star quarterback Russell Wilson from the Seahawks.

The Raiders are a projected $30 million under the salary cap with needs at wide receiver — especially with Zay Jones leaving for Jacksonville on a reported three-year, $30 million deal Monday — offensive line, cornerback and the interior of the defensive line. They have been linked to a handful of wide receivers and cornerbacks throughout the beginning of free agency.

Those wide receivers include the Bears’ Allen Robinson and the Packers’ Marquez Valdes-Scantling. Robinson, 28, is among the top free agent receivers on the market and fits the club’s need for a productive veteran who can step into a starter’s role immediately.

Valdes-Scantling, 27, never quite took off with the Packers after being taken in the fifth round of the 2018 draft. But his top-end speed and ability to stretch the field has been an important factor as a complementary piece. He led the NFL in 2020 with a 20.9 yards per catch on 33 receptions and finished with 16.5 yards per reception on 26 catches in 2021. He was limited to 11 games last season because of a hamstring injury and COVID-19.

The wide receiver market took an interesting turn Monday when the Jaguars signed the Cardinals’ Christian Kirk to a four-year deal worth up to $84 million. The surprisingly big payday sent shock waves throughout the NFL and will certainly impact the asking price of a player like Robinson. The Jaguars then added Jones.

Also, Packers star receiver Davante Adams has reportedly told the club he will not play on the franchise tag. The Packers have time to smooth things out, but their options now become working out a long-term contract, trading him, or calling his bluff that he won’t play under the current contract arrangements.

Until his future is secured, the Raiders are likely to remain a landing spot. Adams would be a major upgrade, and he and Derek Carr, his former Fresno State teammate, have expressed an interest in a reunion.

As for cornerback, the Raiders had been tied to the Patriots’ J.C. Jackson, but the Chargers reached terms with him on a reported five-year, $82.5 million deal with $40 million in guarantees. A healthy cornerback market still includes the Rams’ Stephon Gilmore and the Rams’ Darious Williams, who have been connected to the Raiders.

The Jackson move continued a strong offseason for the Chargers, who last week traded for Khalil Mack, a former Raiders outside linebacker and one of the NFL’s top pass rushers.

It’s early in the process, but it already looks as if the Raiders are playing catch-up in their division.