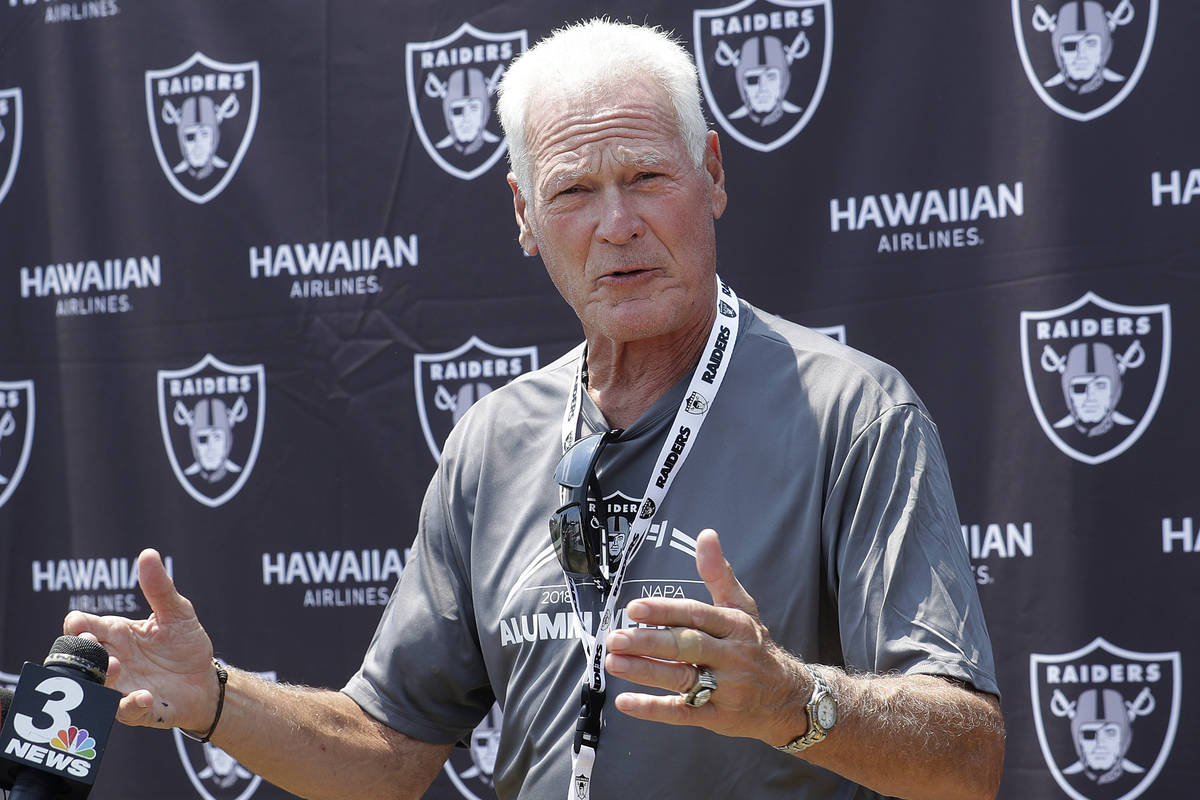 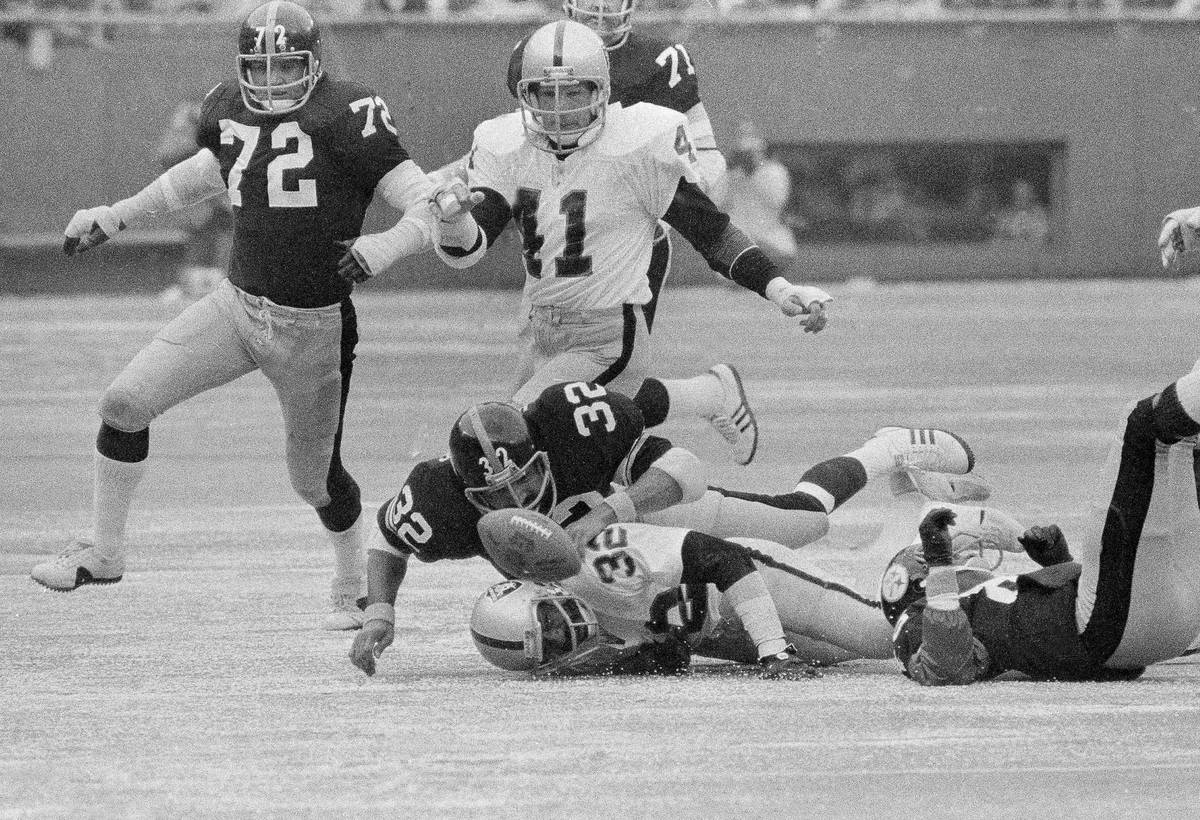 Raiders Jack Tatum, (32) is on the ground as he and Steelers Franco Harris (32) go after the ball in the first half of the AFC Championship game at Pittsburgh, Jan. 4, 1945. Tatum had intercepted a pass intended for Steelers Frank Lewis and them fumbled the ball. Raiders Phil Villapiano (41) moved in and recovered the ball on the play. (AP Photo) 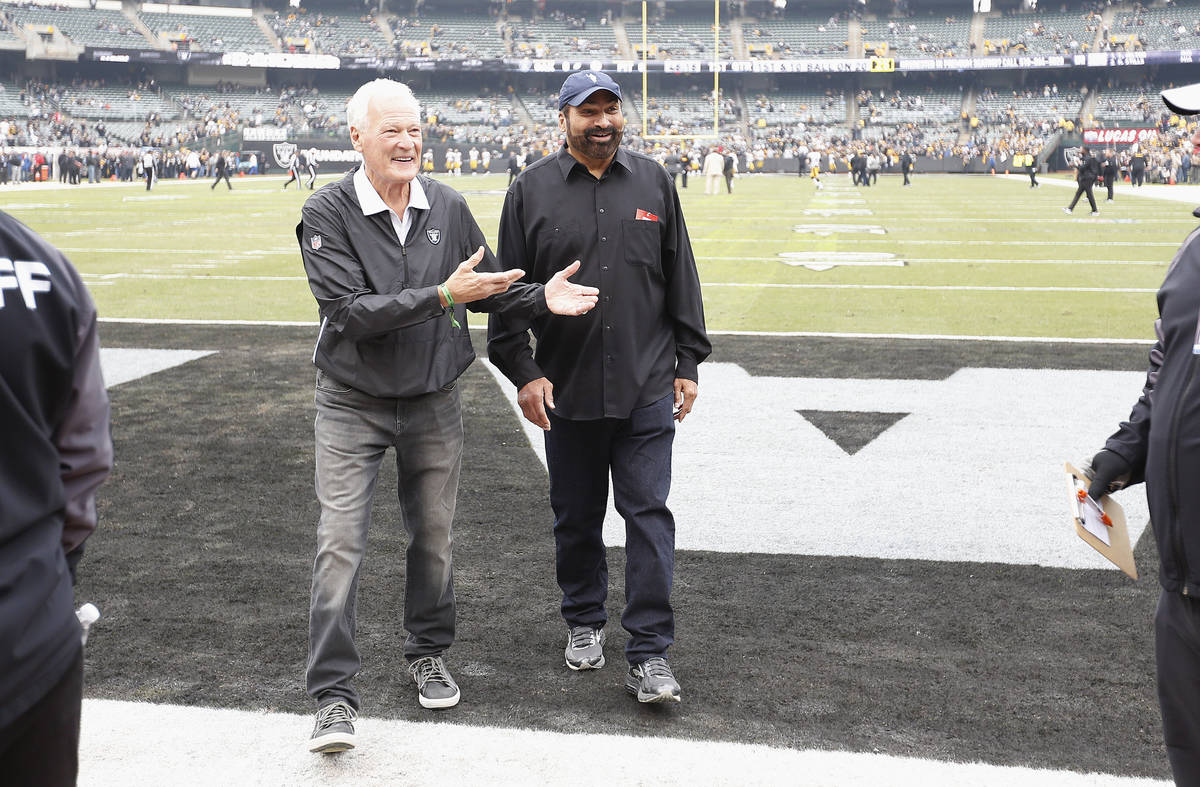 Phil Villapiano sat in the Raiders’ war room with coach Jon Gruden last weekend during the final rounds of the NFL Draft. It was then that Gruden promised the former linebacker that the team’s defense was done being mediocre.

And that’s paraphrasing what the New Jersey native really said as a guest on the Takeaways edition of the Vegas Nation podcast last week to make it suitable for a family audience.

“And then when they tried to stop somebody, they couldn’t because they’re so used to just giving up yards. … I could hardly watch.”

Villapiano said lately, the defense has played too soft.

“You don’t let these guys drive down to get inside the red zone and then start playing football,” he said, referring to Chiefs quarterback Patrick Mahomes’ second meeting with the Raiders last season. “It’s too late. You got to start when you got the whole field and something will go wrong for that offense if you make it tough.”

Drafted by the Raiders in the second round of the 1971 draft, Villapiano was a different breed of football player. He created what he believed to be an impenetrable force with all of his being — no matter what the stakes were. Wherever he dug his knuckles into the field, he thought he was drawing a line in the turf that no opponent would cross.

When asked what defender he’d expect to improve most in the 2021 season, the four-time Pro Bowler said no one had impressed him enough to recall them by name.

“(Clelin Ferrell) has got to improve,” Villapiano said. “And I’ll take (Maxx) Crosby. Effort is effort. Anytime these guys that get drafted No. 1, you have to play like a No. 1,” Villapiano said. “Don’t go there and all of a sudden just become a normal player. No. We pay you like a number one, be a leader. Make some sacks. Be disruptive.”

Though he was considered an undersized linebacker, the Bowling Green standout had a penchant for tackling hard. Though by today’s standards Villapiano would be flagged for some of his methods, including clotheslining ballcarriers with a plaster cast.

Villapiano has been retired for three decades, yet he remains so beloved by Raider Nation that during his recent trip to Las Vegas he was a guest at draft viewing parties with members of the Black Hole.

“This is going to be bragging about our 1970s teams,” he said. “But the people around the (Raider) Nation still know everybody on offense and defense. Why? Because these guys stayed together forever and you played hard together. You know? And that’s what makes the team.

“I think I know more Chiefs than I do Raiders right now because those guys play good,” Villapiano said. “You know what I mean? Play.

“Make me proud, you know, Silver and Black. That’s what I want this year.”

Heidi Fang hosts the Takeaways edition of the Vegas Nation podcast which airs every Wednesday on VegasNation.com. Contact Heidi via e-mail at hfang@reviewjournal.com or follow her on Twitter @HeidiFang.

5
Paul Tagliabue would have fought Raiders move to Las Vegas