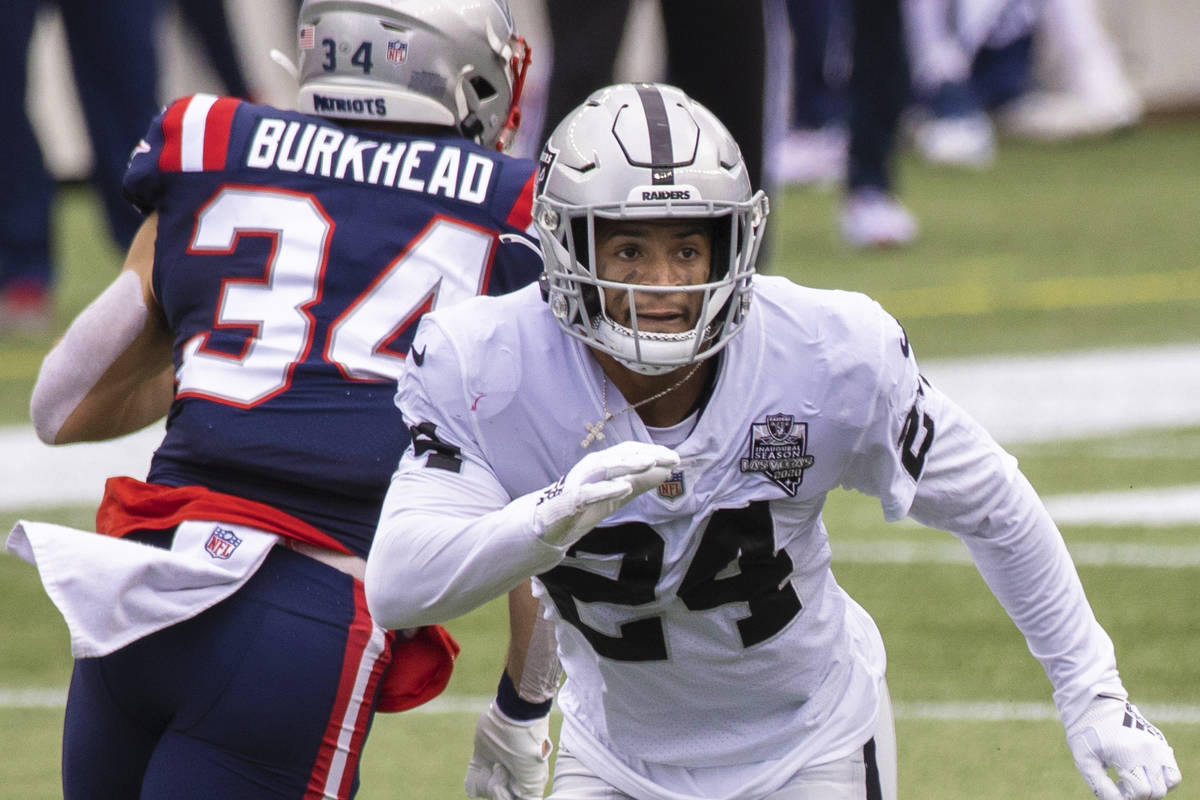 Even with the benefit of a traditional NFL offseason and training camp, there was a possibility the Raiders’ defense would be a work in progress to start the season.

But with COVID-19 completely sabotaging the offseason, that concern turned from possible to inevitable.

Three games into the season, it is clear that adding seven new starters and leaning heavily on so many first- and second-year players has slowed the process of building a cohesive unit.

As the Raiders (2-1) prepare to host the Buffalo Bills (3-0) on Sunday at Allegiant Stadium, they rank 27th in yards surrendered per game (406) and 28th in rush yards allowed per game (163) while giving up the third-most points per game at 30.

All of which was exposed last Sunday in New England. Cam Newton and the Patriots ditched any notion of creativity and fanciness by simply overpowering the Raiders with an old-school run game that dominated at the point of attack and took advantage of shaky run fits and overzealous pursuit angles to rush for 250 yards in a 36-20 victory.

The Patriots’ blueprint, while executed with the kind of precision and brute force we have come to expect from a Bill Belichick-coached team, is one that Raiders opponents would be wise to replicate.

That puts pressure on the Raiders to come up with some much-needed answers.

That is easier said than done given the multitude of issues the Patriots exposed, which were equal parts physical and mental.

The Raiders had problems winning one-on-one battles along the defensive line and at linebacker and blew multiple assignments. All of which created wide-open running lanes.

To compound that, once the Patriots got to the second level, they made Raiders safeties Johnathan Abram and Erik Harris pay for their overly aggressive pursuits and poor tackling angles.

Abram, in particular, had a rough day. The Patriots used basic cuts in the open field to take advantage of his aggressiveness. The result was a couple of long runs in which Abram flew by the ball carrier.

“I think there’s a time and a place for going for the big hit,” Raiders coach Jon Gruden said. “There’s another time and place for just coming to balance and trying to make an open-field grass tackle.”

Of course, if the Raiders didn’t have issues up front, Abram wouldn’t be exposed as much. “We can’t let these runners get up on our safeties one on one,” Gruden said.

By the Raiders’ count, they missed 19 tackles against the Patriots.

“That’s far too many to win any ballgame, let alone against a team like New England,” Raiders defensive coordinator Paul Guenther said. “We’ve got to do a better job. Whoever’s in the spot to make the play and make the tackle, they’ve got to get the runner to the ground, whether it be a receiver or a running back.”

Which brings up another issue.

Neither has been up to the challenge, with Littleton among the lowest-rated linebackers in the NFL, according to Pro Football Focus, with an overall grade of 29.8 on a scale of 100, and Collins not much better with a 43.4. Both have been liabilities in run defense, with Littleton earning a grade of 36.0 and Collins grading out at 40.6.

In each case, the transition to a new defense and the pressure to live up to expectations could be a factor.

“I think Maliek is pressing a little too much,” said Guenther, who brought up the strong play by Collins on the practice field as proof he simply needs to settle down and start playing like that in games.

“He’s just gotta go in and do his job, let the things come to him,” Guenther said. “He’s got to play at a high level for us to be successful.”

As does Littleton, who recognizes the struggles he’s had.

“So far it hasn’t been that great. But that’s football,” Littleton said. “There’s upswings and there’s downswings. Hopefully (I) get back on track and be the player I want to be.”

On the bright side, defensive linemen Maurice Hurst (80.3), Jonathan Hankins (78.4) and Cle Ferrell (74.4) have all graded out strongly, according to PFF.

That creates hope that, if players like Littleton and Collins merely return to form, the Raiders’ defense will improve.

It also helps that Nick Kwiatkoski appears on target after missing most of the first three games with a pectoral injury. Before getting hurt in the season opener against the Carolina Panthers, Kwiatkoski was the highest-graded Raiders linebacker and among the highest-graded defensive players on the team.

Kwiatkoski’s leadership and ability to call the defense and get teammates lined up correctly have been sorely missed.

“It’s almost like he’s been in the system three or four years,” Guenther said of the quarterback of the Raiders’ defense. “He’s a vocal leader. He sees a lot out there on the field as far as how we’re setting up, getting in and out of calls. He’s a very stout run defender. He’s good in the pass game. So he’ll be a big part of the middle of our defense if he’s able to go this week.”