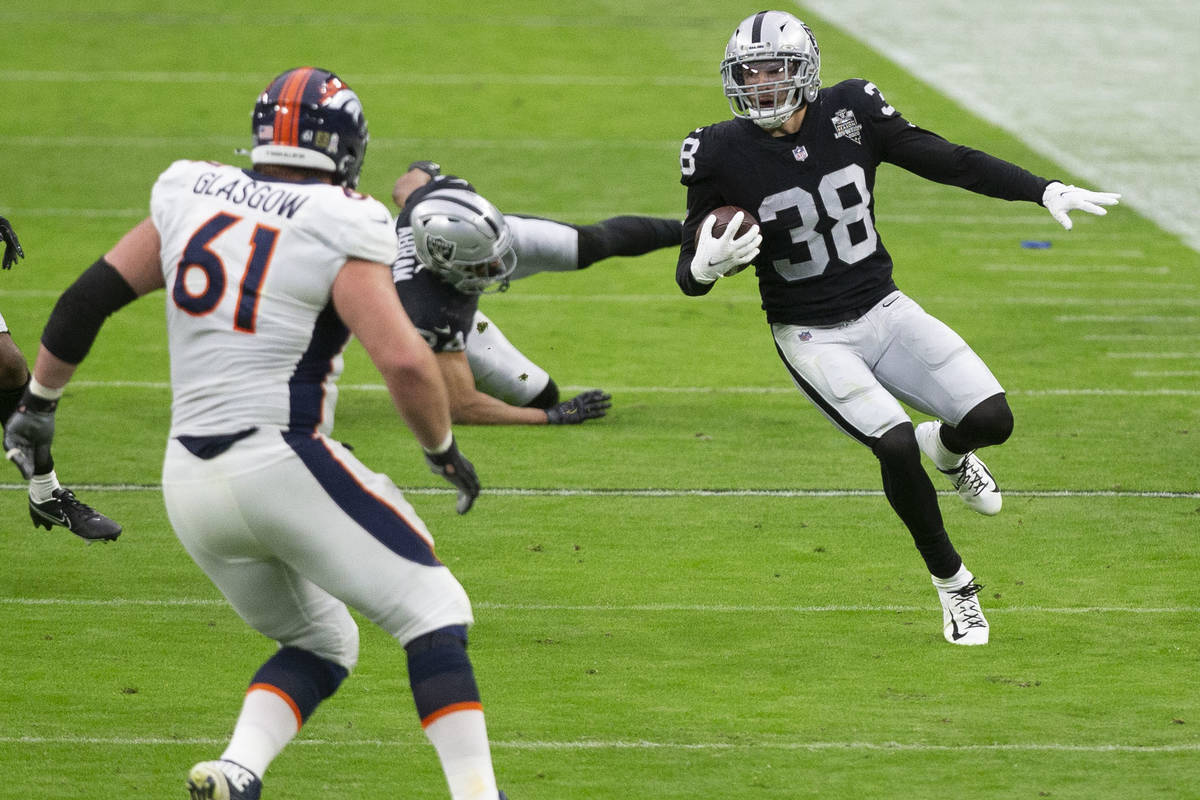 Opposing quarterbacks will soon learn not to test Jeff Heath on November 15.

The Raiders’ safety had the second two-interception game of his career on Sunday, exactly five years after he did it for the Cowboys in 2015.

It’s the only two times he’s played on the date in his pro career.

“I remember that game,” Heath said after the Raiders’ 37-12 victory over the Broncos at Allegiant Stadium. “I didn’t remember it was the same day. I think those were both tipped balls and I think we lost that game as well. These felt better. It’s always better when you win.”

Heath’s memory was as sharp as his pass defense on Sunday. The Cowboys lost that game 10-6 when he intercepted Tampa Bay’s Jameis Winston twice.

His efforts Sunday helped ensure the takeaways wouldn’t be futile for the Raiders, particularly his pick in the end zone just before halftime.

The Broncos trailed 10-6 when Drew Lock tried to throw a slant to Jerry Jeudy only to have Heath make a break on the ball and come up with the catch.

Heath’s interception came one play after he drew a holding penalty that nullified Lock’s touchdown run.

“Both kept points off the board,” Heath said. “But I liked the interception more.”

Coach Jon Gruden credited the reserve safety, who had only played 12 defensive snaps over the past two weeks while nursing an injured hip, with sparking a unit that forced five turnovers in the victory after forcing just five in the first eight games.

“Jeff Heath started it off,” Gruden said. “He’s made some big plays. He’s not playing 100 percent, but getting close. I think he got the fire started and then we just got some good overall play by the defense. But the one before half was big. It took points off the board.”

Heath’s first interception also came at a key time. The Raiders held a 7-3 lead with 1:24 left in the first quarter and the Broncos faced a third-and-14. Lock attempted to force the ball to KJ Hamler downfield in triple coverage. Heath came up with the overthrown pass, returning it 24 yards into Denver territory.

But none of Sunday’s five forced turnovers was bigger than Heath’s interception just before the half.

“It was huge,” quarterback Derek Carr said. “You have to start the half right and end the half right. Jeff had a huge day. When he got that pick at the end of the half, the defense was juiced. The passion on the sideline was awesome. It definitely helped us out.”

Running back Josh Jacobs said he predicted the interception a play earlier in a conversation with Devontae Booker.

Jacobs said he told Booker with all the under routes and crossing routes the Broncos were running in the red zone, there would be an opportunity for the defense to make a play.

“It was just a matter of time,” Jacobs said. “I felt like it took the life out of them and gave us the momentum.”

Heath spent his first seven seasons with the Cowboys after joining the franchise as an undrafted free agent out of Saginaw Valley State. He had eight interceptions in those eight years, which included a full-time starting role the last three years.

He has been mostly a reserve with the Raiders, but started and played 100 percent of the defensive snaps in a loss to the Buccaneers last month.

Heath’s most significant contribution before Sunday was an interception of Patrick Mahomes that helped the Raiders to an upset of the Chiefs, who will visit Allegiant Stadium next week.

“Jeff Heath made a play that ignited us against the Chiefs. We’re going to need him again next week because that’s a really good team coming to town,” Gruden said.

Heath and the rest of the defense have been playing much better since the loss to Tampa Bay left the Raiders 3-3, though he insists there weren’t any drastic schematic changes.

The Raiders completely shut down the Browns on the road in awful weather, then made enough plays against the Chargers to escape Los Angeles with a victory.

“We narrowed the plan a little bit, but really we’re just playing better,” Heath said. “It’s not about the plan or the opponents or the conditions, you just have to play good. When you do your job, you know what to do and you do it fast, most of the time you’re going to have success.”

Heath did his job on Sunday.