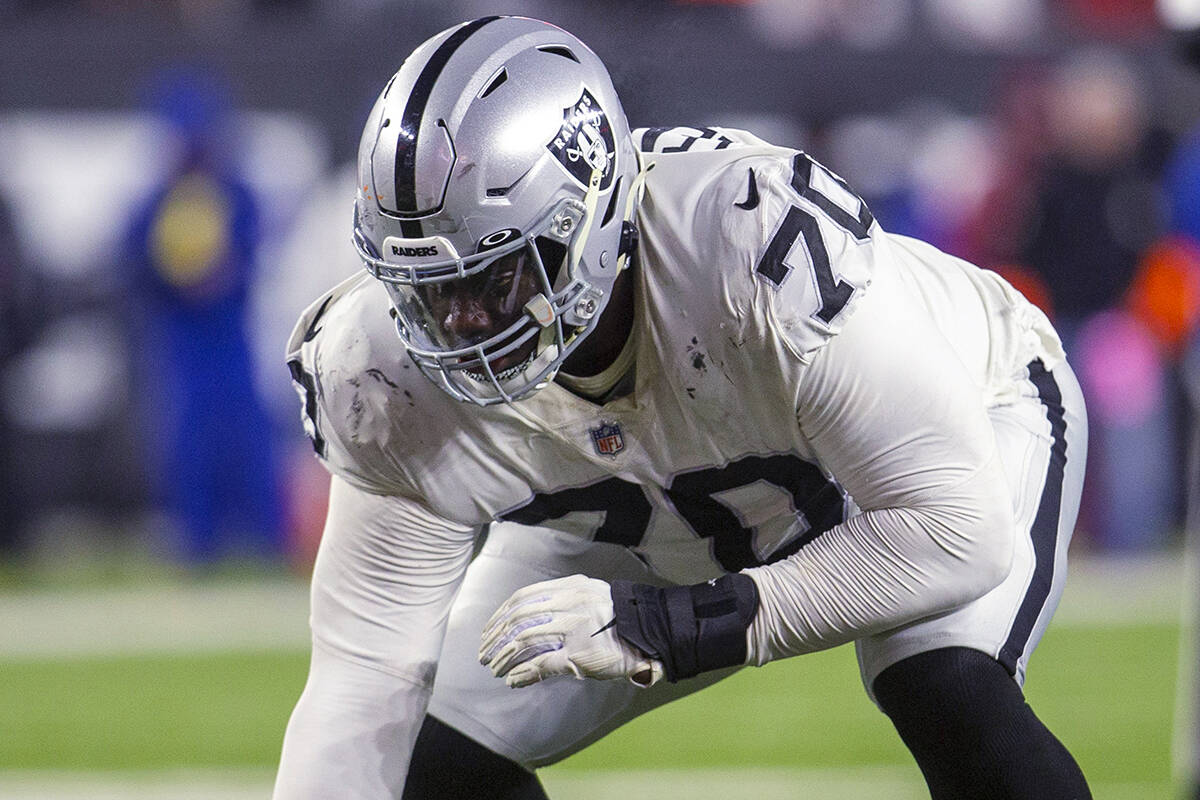 The Raiders laid relatively low on the offensive line this offseason.

Sure, they used a third-round draft pick on interior offensive lineman Dylan Parham and a seventh-round pick in tackle prospect Thayer Munford.

But given the struggles this group endured last year, the lack of major moves is a sign the team’s coaches believe whatever needed improvement resides within their building.

“The guys we have on the roster right now are competitive, and we’re going to try to coach them and improve them, and that’s our job,” Raiders coach Josh McDaniels said at the NFL meetings in March. “If we can’t make the players on our team better, then we got to do something different. So, we feel like that’s a big role that we got to play.”

Some of that is tied into the ability of Alex Leatherwood to take a big step forward in his second year. Yet it’s more than that as they move into Phase 3 of their offseason program and prepare for their mandatory mini-camp June 7-9.

By the end of last season — and after a series of injuries — the starting line consisted of Miller (LT), Simpson (LG), James (C), Leatherwood (RG) and Parker (RT).

While there could be some tinkering between now and training camp, the Raiders seem content with this group producing a capable starting five. Their hope is the combination of last season’s playing experience — the good and the bad — and new influence of coach McDaniels, offensive coordinator Mick Lombardi and offensive line coach Carmen Bricillo will be the catalyst for improvement.

The Raiders ranked 28th among NFL offensive lines by Pro Football Focus, making their 10-win season and playoff berth all the more impressive. While the final ranking was by no means acceptable, it really isn’t a surprise given all the turnover from the season before and the turmoil that ultimately ensued.

In order to free up cash to invest in defensive help, the Raiders traded veteran guard Gabe Jackson, center Rodney Hudson and tackle Trent Brown last offseason. That created a learning curve for the 2021 unit, an ascent that grew higher when veteran guards Richie Incognito and Denzelle Good both went down with season-ending injuries by the first game of the season.

The lack of experience was a major blow to a group that was heavily dependent on continuity, cohesiveness and chemistry. While there were flashes of solid play, the players struggled to create a consistent push for the run game or keep Derek Carr upright.

Meanwhile, the ripple effect of the injuries landed at the feet of Leatherwood, who was drafted in the first round last year to be the starting right tackle. Three games into his rookie season, though, he was moved to right guard. While the switch was partly the result of his first-year struggles, it had more to do with the hole created by losing Good and Incognito.

The two veterans were expected to be anchors alongside Leatherwood and James, who was a converted college tackle tasked with replacing Hudson at center. But their injuries — one in the middle of training camp and the other in the season opener — sent the Raiders into scramble mode trying to figure out a new best starting five among an offensive line group being pushed to its depth-chart limits.

Had Good stayed healthy, Leatherwood likely remains at right tackle all season and, quite possibly, alters the perception that the Raiders have a desperate need at that position.

A year later, the combination of a healthy Good, a seasoned Simpson and the drafting of Parham greatly enhances the Raiders’ outlook at guard. As a result, Leatherwood will be given a chance to move back to right tackle and regain his starting job.

“We know what he was drafted for and we’re going to give him an opportunity to do such,” said McDaniels.

If Leatherwood can solidify right tackle and Good can settle in alongside him at right guard, that side of the offensive line has a chance to be solid. With James the odds on favorite to win the center job and Miller the mainstay at left tackle, it leaves Parham, Simpson, Eluemunor, Meredith, Cotton and Grasu to figure out left guard and the backup interior roles, and Parker, Munford, Barton, Olaseni and Wheatley Jr. to figure out the swing tackle jobs.

If it works out, the Raiders will have a deeper and more experienced offensive line this season.

If not, it could be another season-long issue, working around a below-average line.