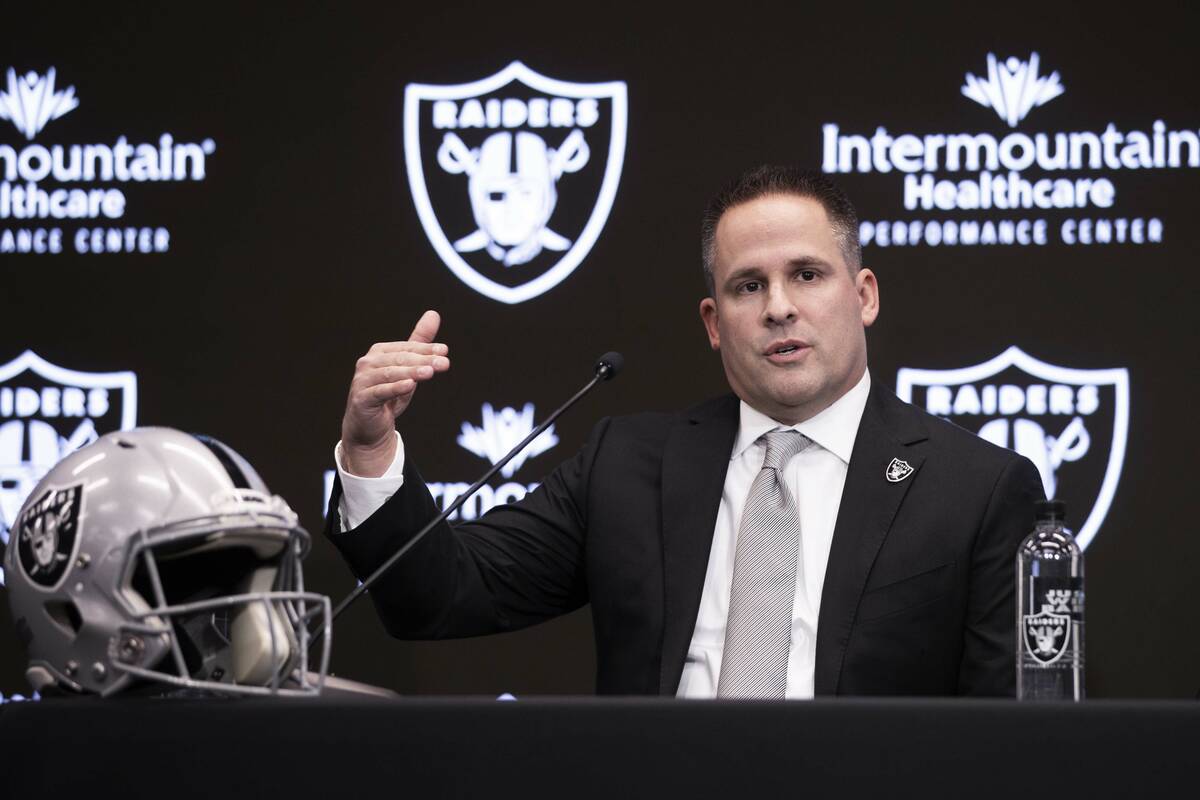 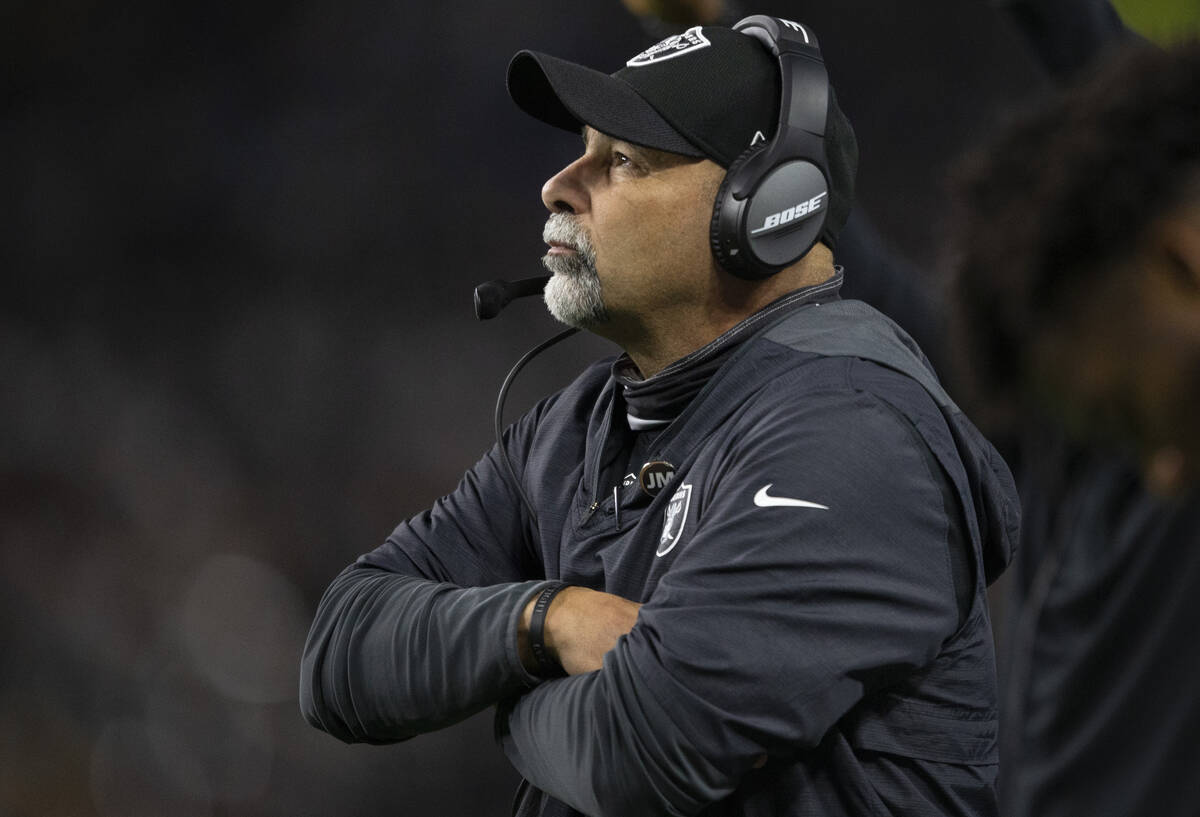 Raiders interim head coach Rich Bisaccia looks to the scoreboard from the sideline during the first half of an NFL football game against the Los Angeles Chargers on Sunday, Jan. 9, 2022, at Allegiant Stadium in Las Vegas. (Heidi Fang/Las Vegas Review-Journal) @HeidiFang

The Raiders have a new head coach in Josh McDaniels and general manager in Dave Ziegler. Suffice to say, their fans now have a bunch of questions about how all this plays out.

From the future of Rich Bisaccia to Mark Davis wanting an explosive element offensively to what direction the Raiders take in the draft, the fans are beyond curious.

Joe Dias (@VegasDias): Since the Jacksonville Jaguars hired Doug Pederson as head coach, do you think Rich Bisaccia will stay with the Raiders?

VINCENT BONSIGNORE: At this point, it feels like the Bisaccia ship has sailed. Nothing personal on either his or Josh McDaniels’ end, but there is bound to be some awkwardness in a setup with Bisaccia back in the fold.

Things can obviously change. But given everything the Raiders went through last year and some of the emotional bonds that were created, you wonder how that would play out with Bisaccia returning to a special teams role working under McDaniels.

Zach (@ze_rose): Will Josh McDaniels be calling the plays on game day?

VB: Throughout the process of the Raiders hiring McDaniels, one constant theme that kept coming up while reporting the story was how highly regarded McDaniels is across the NFL from an offensive standpoint, both as a tactician and play-caller.

Part of his allure for the Raiders was his offensive expertise. So you have to assume he will play to that strength as the head coach.

Joe (@Breshlo): Impressed by Dave Ziegler bringing in Champ Kelly as the assistant general manager. Ziegler could have had the mindset of “I’m the man and don’t need the second opinion.” Do you think Ziegler and Kelly had their own evaluations on draft prospects that they brought with them? Or solely going off what current Raider scouts bring back?

VB: The Ziegler-Kelly tandem has a chance to be solid. Personnel departments include the college and draft evaluators, but also staff devoted primarily to pro personnel — as in keeping an eye on the talent across the NFL for trade, free agent and waiver wire purposes.

Having Ziegler and Kelly now managing both sides of that coin can only help the entire process.

The Raiders scouts will be heavily leaned on, but Ziegler and Kelly have both been on top of the draft for the Patriots and Bears, respectively, and will certainly bring their own perspective.

SteelCityAmerican football (@Raider412): I think the Raiders should draft wide receiver Jahan Dotson out of Penn State in the second round. What are your thoughts on that?

VB: The Raiders absolutely have to address wide receiver, which was dealt a big blow with the release of Henry Ruggs. Dotson certainly makes sense at that point in the draft. Others to keep an eye on in the first round are Garrett Wilson of Ohio State, Jameson Williams of Alabama, Drake London of USC, Chris Olave of Ohio State and Treylon Burks of Arkansas.

BaltimoreRaider (@ChrisWop1): Do Josh McDaniels and Dave Ziegler truly believe in Derek Carr or is there a possibility some serious competition comes in?

VB: The support for Carr seems genuine, and the sense is something will happen in terms of a contract extension. That won’t necessarily preclude them from drafting a young quarterback.

But the most likely objective in that scenario is to develop a young prospect either as a long-term successor or, as the New England Patriots have done over the years, as a potential trade asset.

It seems dubious the Raiders would bring in a veteran to “create competition.” Pushing Carr to be his best has never been an issue. Building a complete team around him has been the biggest problem.

That said, if an opportunity presented itself to get decidedly better at quarterback via trade, the Raiders would explore all opportunities.

Big BenSkull (@Pitz73): At the press conference, Josh McDaniels was answering a question of how his offense would look. He nudged Mark Davis, laughing, and said yes to being explosive.

Sounds like Davis wants that deep threat he had with Henry Ruggs. Do you think Davis will meddle?

VB: Meddle? No, at least not in an over-the-top way. Will he hold people accountable and sometimes express anger and disappointment? That comes with the territory. As far as the Raiders being explosive offensively, that has been a trait for the Raiders throughout their history. It stands to reason Davis expressed that to his new head coach.