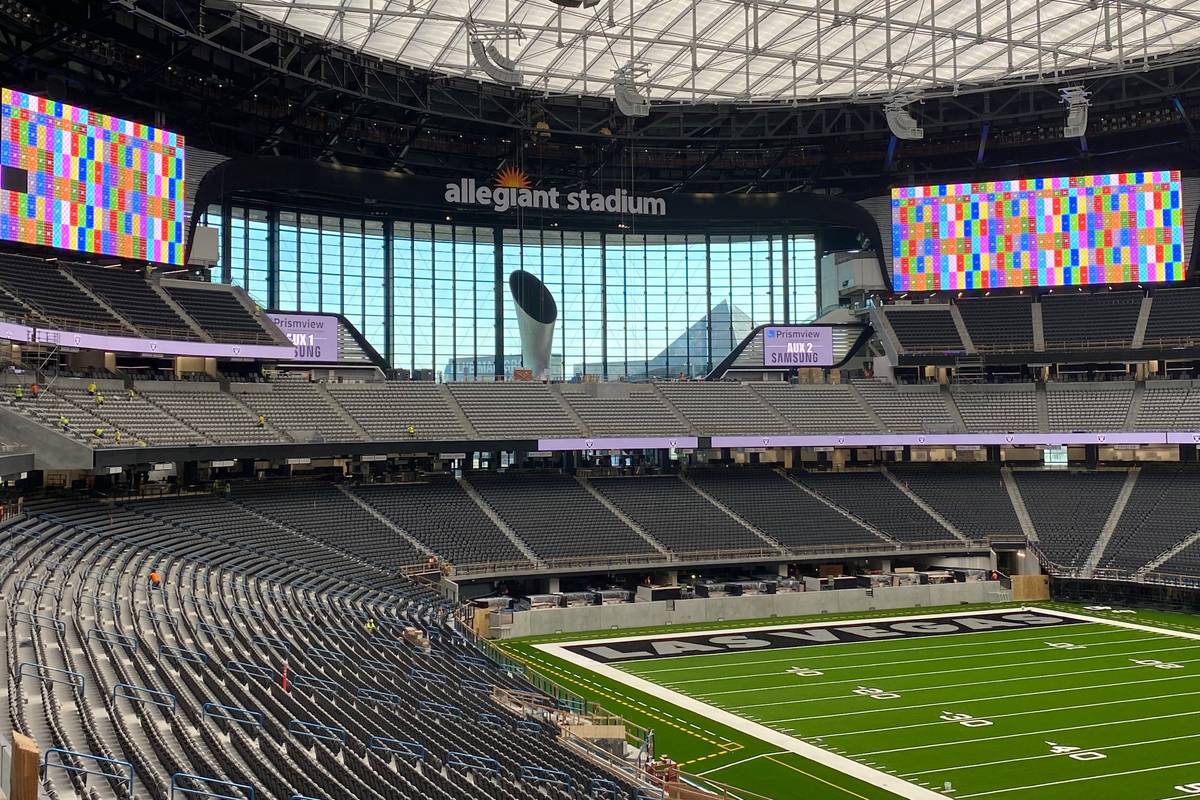 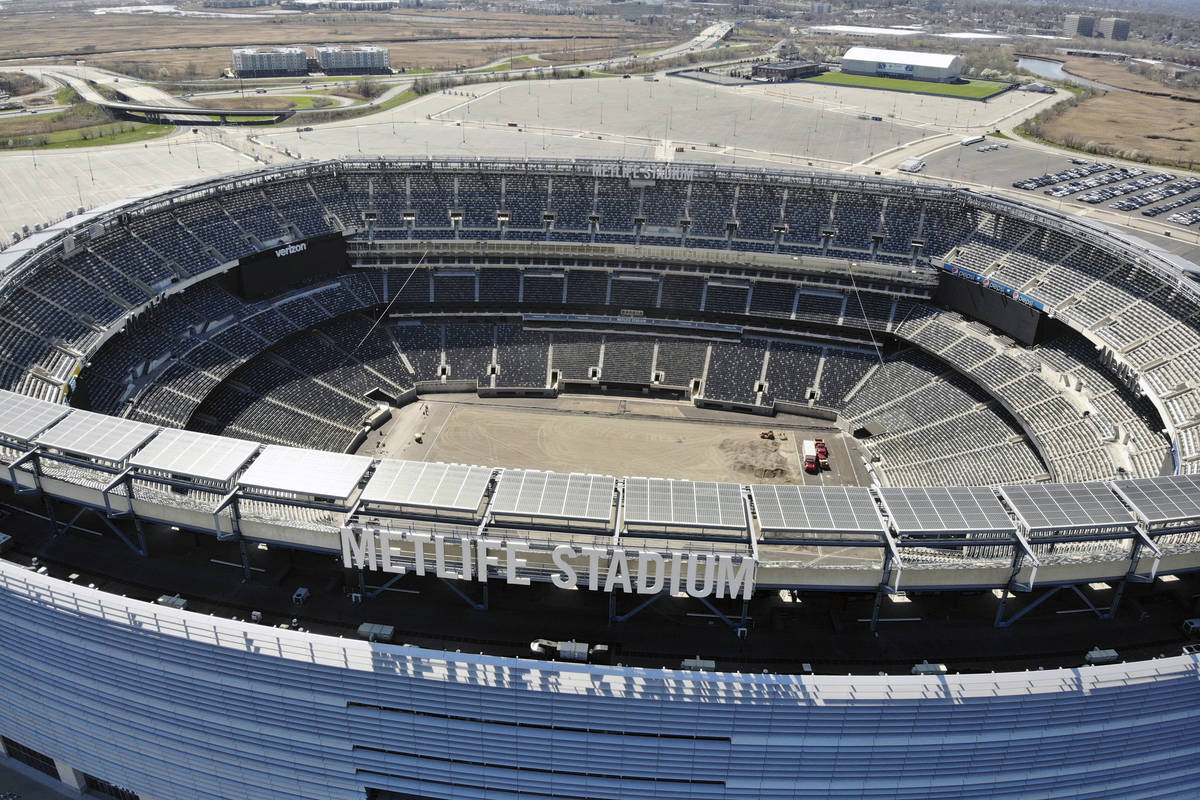 FILE - In this April 6, 2020, file photo, an empty MetLife Stadium in East Rutherford, N.J. , is viewed. Timing favored the NFL over other major pro sports leagues in trying to figure out how to keep the coronavirus pandemic from wrecking the 2020 season. America's most popular sport has another big advantage if the games are played: TV money. While NFL owners could lose billions collectively with limited capacities in stadiums or no fans at all, the league is well-positioned financially because of lucrative media contracts approaching $10 billion in a full 2020 season. (AP Photo/Ted Shaffrey, File) 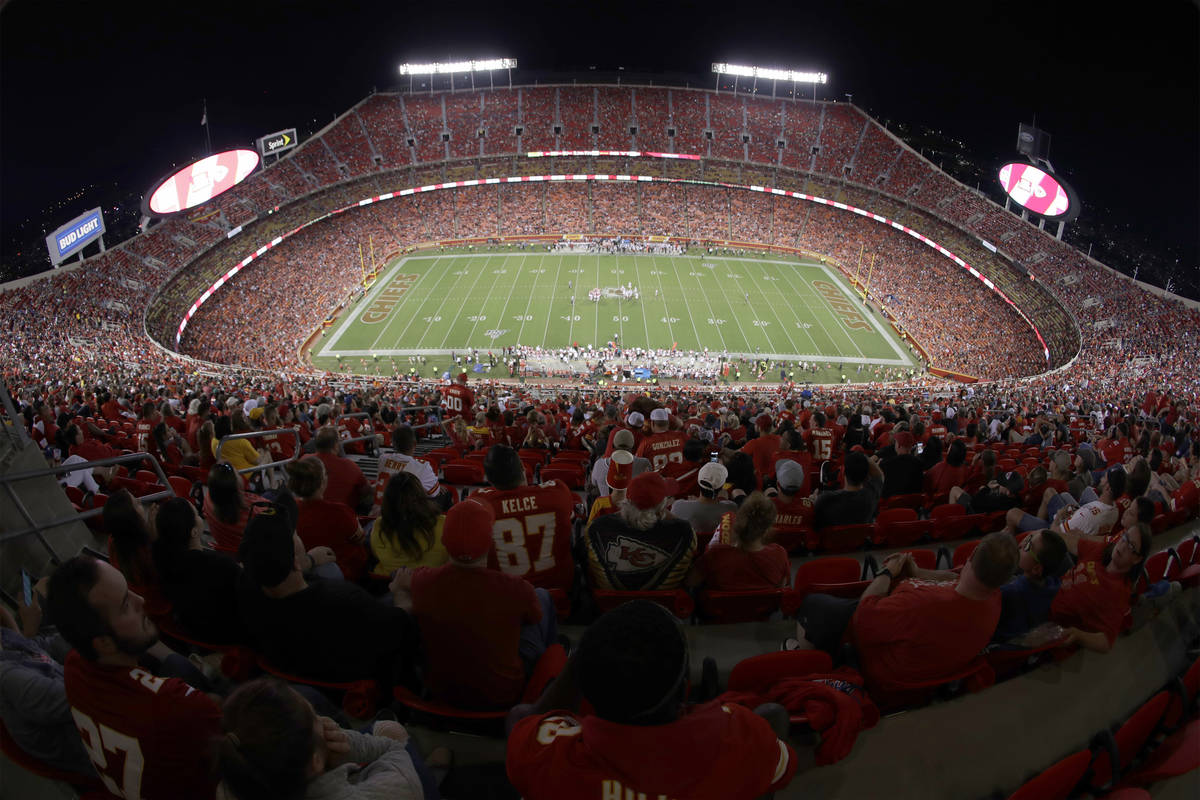 FILE - In this Aug. 24, 2019, file photo, the Kansas City Chiefs and the San Francisco 49ers play during the second half of an NFL preseason football game at Arrowhead Stadium in Kansas City, Mo. The Chiefs will open defense of their Super Bowl championship by hosting Houston on Sept. 10 in the NFL's annual kickoff game — pending developments in the coronavirus pandemic, of course. (AP Photo/Charlie Riedel, File)

The Kansas City Chiefs are scheduled to open the 2020 NFL season with a Thursday night primetime celebration of their first championship in 50 years when they host the Texans at Arrowhead Stadium on Sept. 10.

One of the loudest and most boisterous stadiums in the league will be significantly muted after the team announced earlier this month their games would be played with reduced capacity.

The Chiefs didn’t specify details on exactly what that meant and there’s no guarantee any fans will be allowed in even if the season does go on as planned.

Several other teams have been more specific in making similar announcements over the last 10 days. The Raiders are not among that group.

While internal discussions about how many — if any — fans will be allowed inside shiny new Allegiant Stadium are no doubt ongoing, the team has not made any announcements. A team official said no decisions have been made.

While the NFL has essentially left the decision up to individual clubs, it may not be completely in the Raiders’ hands.

An NFLPA document listed Las Vegas at No. 6 in its ranking of coronavirus hotspots among the NFL markets. Current state guidelines allow for professional sports to take place only in venues without fans present.

Kansas City acted early despite ranking No. 13 on that list.

“People around the country and around the world are getting accustomed to a constantly changing environment and the same goes for all of us in Chiefs Kingdom,” Chiefs president Mark Donovan said in a statement. “While our goal all offseason was to have a full stadium as we begin our Super Bowl title defense, it is out of consideration of the health and safety of our fans, employees, coaches and players that we move forward with a reduced-capacity plan that adheres to local guidelines and expert recommendations.”

The Chiefs announcement came just after the Ravens revealed a more detailed decision. The Ravens announced July 8 they would limit capacity at M&T Bank Stadium to 14,000 if the state of Maryland approved spectators at all.

There was one note from their announcement that could be of particular note to Raiders fans in Las Vegas: Personal Seat License owners will be given the first option to buy whatever tickets do become available this season. The Raiders sold $478 million in PSLs for Allegiant Stadium, ranging from $500 to $75,000.

Teams announcing plans to reduce capacity have a massive challenge in determining who gets access to the limited number of seats, which would be particularly difficult in Las Vegas where tickets evaporated immediately and demand on the secondary market already was massive.

The Jacksonville Jaguars followed the Ravens’ lead two days later, announcing they would limit attendance to 25 percent capacity, though the Jaguars expressed optimism that number may be able to increase at some point in the season.

Face masks will be required at Jacksonville’s TIAA Bank Field. Like several other teams, the Jaguars announced they are transitioning almost exclusively to cashless payment and will work on a seating chart to promote social distancing between groups who aren’t together.

The Carolina Panthers, who are scheduled to host the Raiders in Week 1 on Sept. 13, told Thursday season-ticket holders to not expect to attend every game. While they have not determined an exact reduction in capacity, fans can expect health screening and a face-covering requirement.

The Green Bay Packers made a similar statement to its fans, expressing hope that fans will be permitted in their iconic venue in some form for games this year.

“As a result, the special experience to which fans are accustomed at Lambeau Field will look and feel very different,” a statement read.

The Patriots expect to host about 20 percent of the total capacity at Gillette Stadium as they open the post-Tom Brady era.

Of course, all of these announcements are pending local government approval and very subject to change.

The league voted 31-1 to block off the first eight rows at stadiums this season in order to provide distance between fans and the sidelines, which also gave owners a new revenue stream for selling ads. Raiders owner Mark Davis made was the dissenting vote.

Davis said at the time he couldn’t imagine telling one fan they couldn’t go to games they bought tickets to attend.

A sold-out Garth Brooks concert is still scheduled for Aug. 22 to open Allegiant Stadium. The Raiders open their home schedule against the Saints for Monday Night Football on Sept. 21.