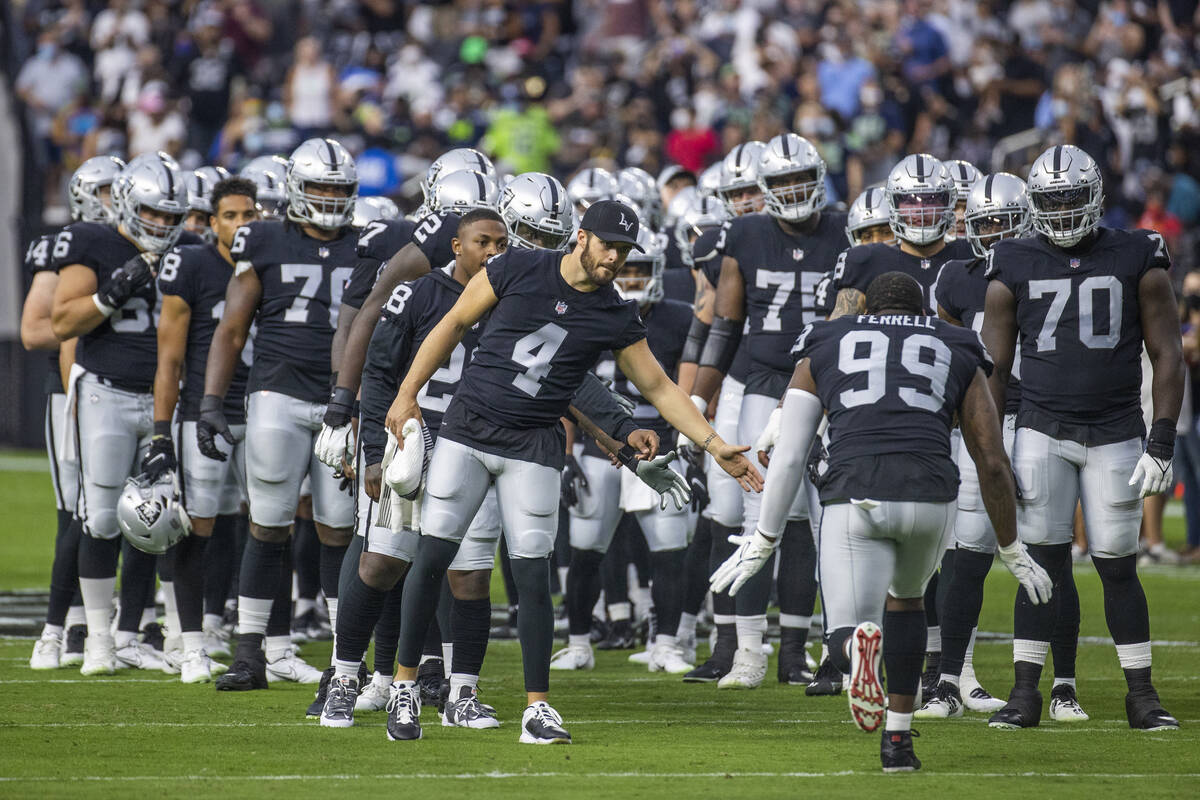 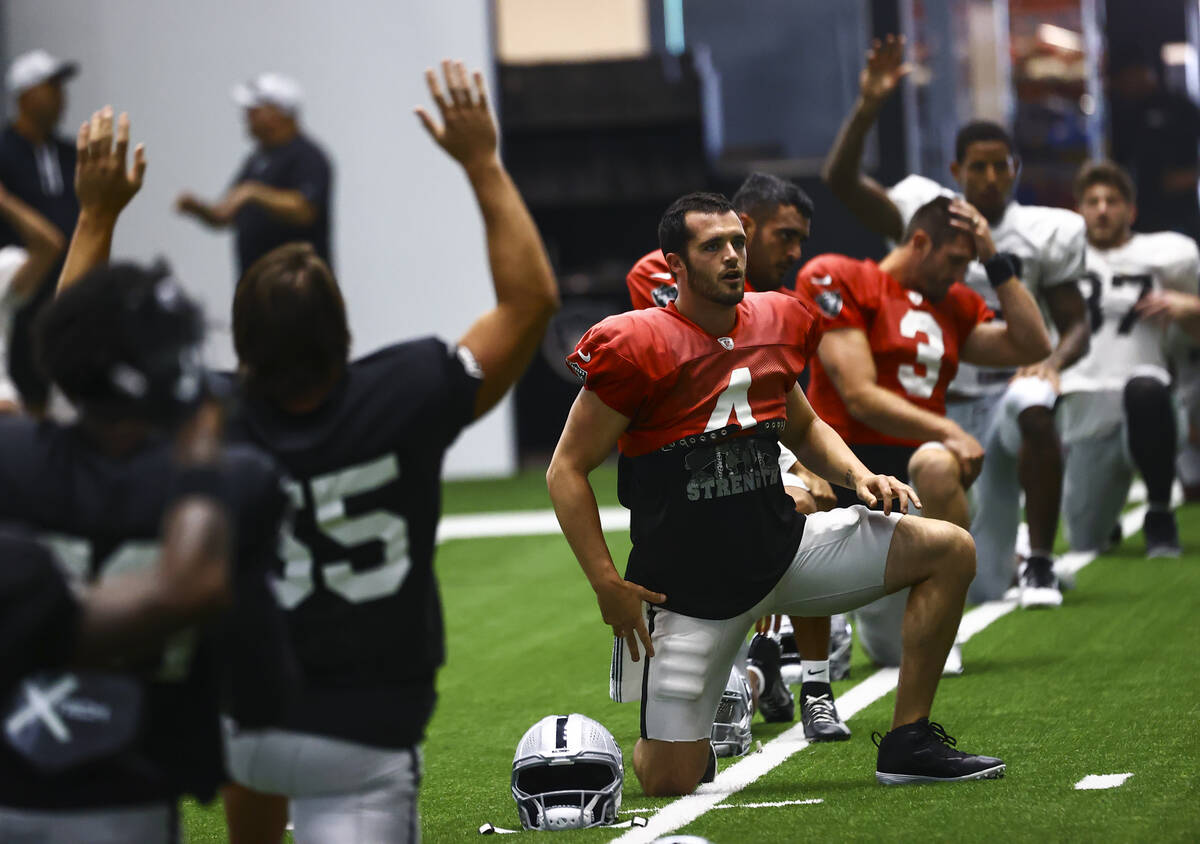 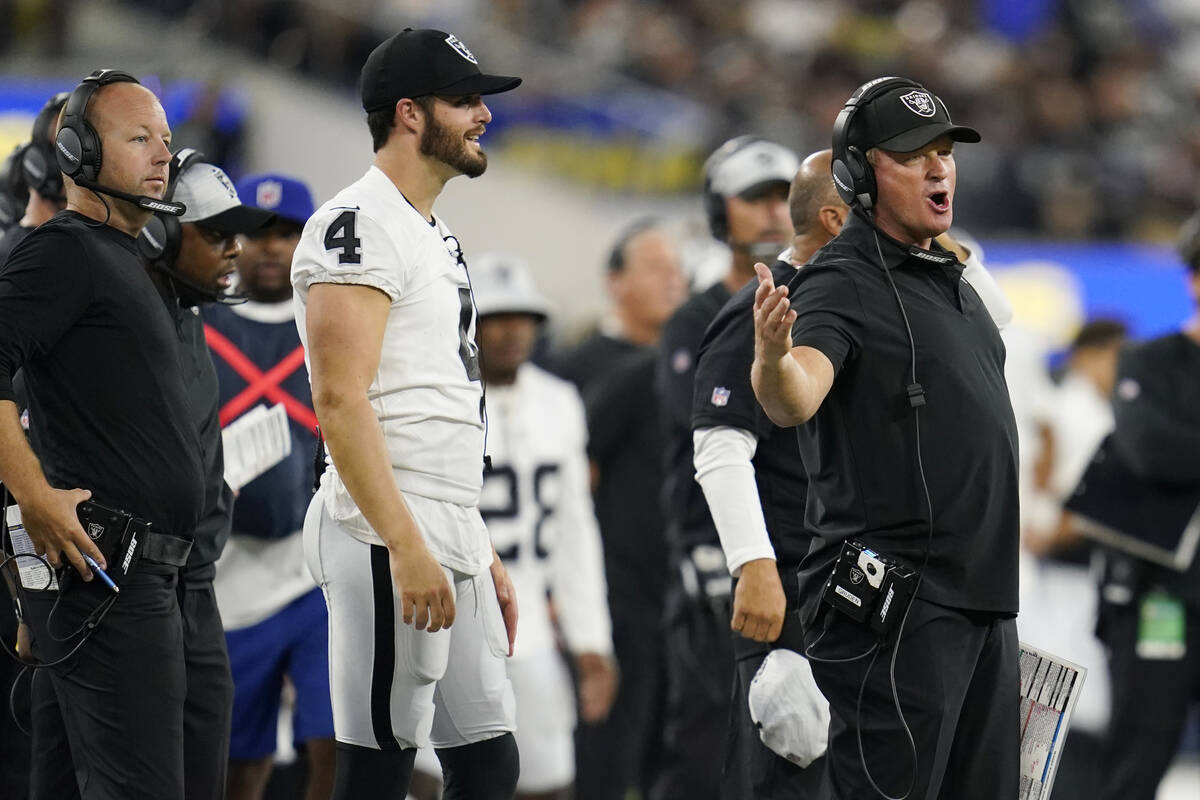 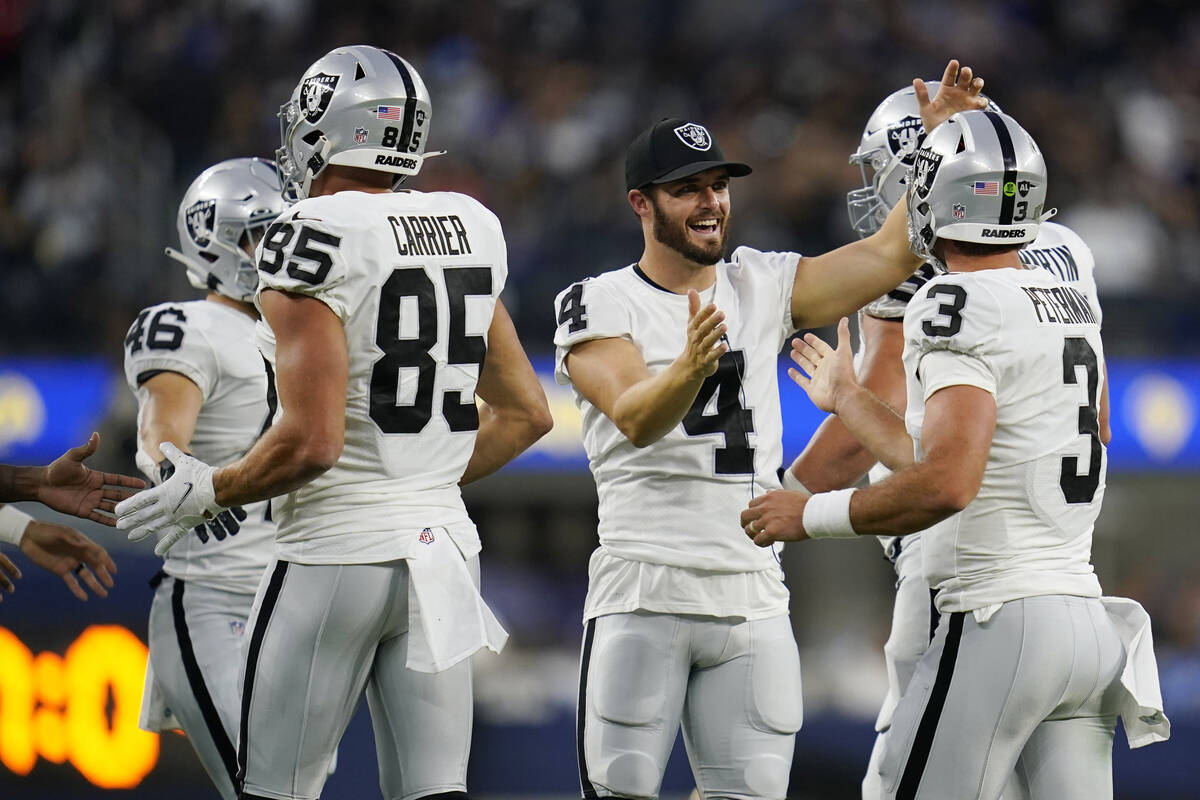 Las Vegas Raiders quarterback Derek Carr (4) celebrates with quarterback Nathan Peterman (3) after a rushing touchdown by Trey Ragas (not shown) during the first half of a preseason NFL football game against the Los Angeles Rams, Saturday, Aug. 21, 2021, in Inglewood, Calif. (AP Photo/Ashley Landis)

Editor’s note: This is the first of two parts grading the Raiders’ roster entering the season. Today: the offense.

The Raiders scored the 10th-most points in the NFL last year, which was more than good enough to qualify for the playoffs. But one of the worst defenses sabotaged those plans.

In spite of how good Derek Carr and the offense were a year ago, Jon Gruden and Mike Mayock believed change was necessary. Part of that was motivated by a need for salary cap relief and part to inject more versatility into an attack that struggled in the red zone.

Here is a position-by-position look at the Raiders offense. (* — injured reserve; + — suspended list).

■ What’s new: The Raiders are rolling with the same crew from last year, albeit with a presumably healthier Marcus Mariota. He was banged up at the tail end of training camp, but if he’s good physically expect him to be the clear No. 2.

■ Bottom line: Coming off the best season of his career, Carr is heading into his fourth year under Jon Gruden and in full command of the offense. He is surrounded by the best supporting cast in his career, so expectations are high. Mariota, if healthy, could see action as a situational quarterback taking advantage of his running and passing skills. Peterman offers plenty of playbook command in his third season in the program.

■ What’s new: The Raiders reeled in Kenyan Drake early in free agency, identifying him as an ideal complement to Jacobs but also a run/pass fit in Gruden’s offense. Peyton Barber was a late addition and replaces the injured Jalen Richard.

■ Bottom line: For everything Jacobs has done well over two consecutive 1,000-yard rushing seasons, staying healthy has been an issue. The addition of Drake helps mitigate that issue, while also adding versatility. Barber is a proven third-down back. In Ingold, the Raiders have arguably the best fullback in the NFL.

■ What’s new: Snead is the only newcomer, with Nelson Agholor moving on to New England.

■ Bottom line: The Raiders are banking on Ruggs and Edwards taking big steps forward in their second season, and if they calculated correctly, it should mean a speedier wide receiver group. Renfrow represents the only certainty, though, with Snead and Jones a pair of veteran backups. Until Ruggs and Edwards prove it, it’s a lot of fingers crossed.

■ What’s new: Bowers, in his second year with the Raiders, made the team out of camp and replaces Jason Witten in the four tight-end group. The real change is the new role for Moreau, healthy off a knee injury and ready to blossom.

■ Bottom line: Waller is one of the NFL’s most electrifying weapons, and Moreau is an emerging young weapon. The Raiders run multiple heavy tight-end packages and have the right group to do it.

What’s new: The Raiders cut ties with oft-injured Trent Brown, replacing him with Leatherwood, who they believe has the durability, passion and talent to be a decade-long stalwart at right tackle. Eluemunor was a late addition as a swing tackle candidate.

Bottom line: The Raiders are counting on the durability of left tackle Miller, who is growing into one of the best in the business, to create consistency. They have to because it might get dicey if the Raiders have to turn to backups Parker and Eluemunor.

■ What’s new: Gabe Jackson was traded in the offseason to create salary-cap space, leaving big shoes to fill. His spot will be filled by Good, who showed enough last season to create confidence that he can be the full-time starter.

Bottom line: Incognito and Good are more than capable of providing the necessary level of play, but Incognito has been unable to finish two straight seasons because of injuries. Simpson looked ready to go in training camp, but can the second-year Clemson prospect hold down the fort if asked?

■ What’s new: James, who spent the past two years as a project, replaces long-time starter Rodney Hudson. While there is confidence in James as a starter, it’s a concern until he proves it. Martin adds experience behind James and can play guard if necessary.

■ Bottom line: Until James proves he can be a full-time NFL starter, this position remains a question mark.