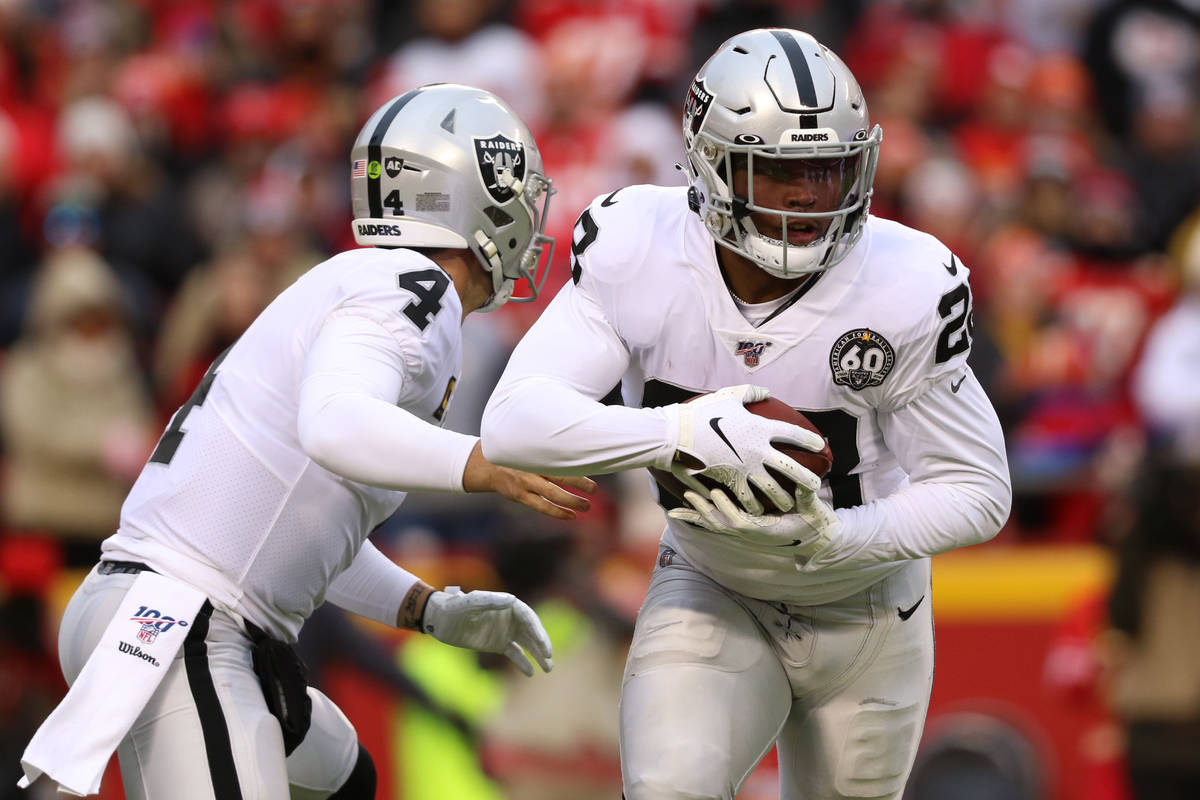 Oakland Raiders quarterback Derek Carr (4) hands off the football to running back Josh Jacobs (28) during the first half of an NFL game against the Kansas City Chiefs at Arrowhead Stadium in Kansas City, Mo., Sunday, Dec. 1, 2019. (Heidi Fang /Las Vegas Review-Journal) @HeidiFang 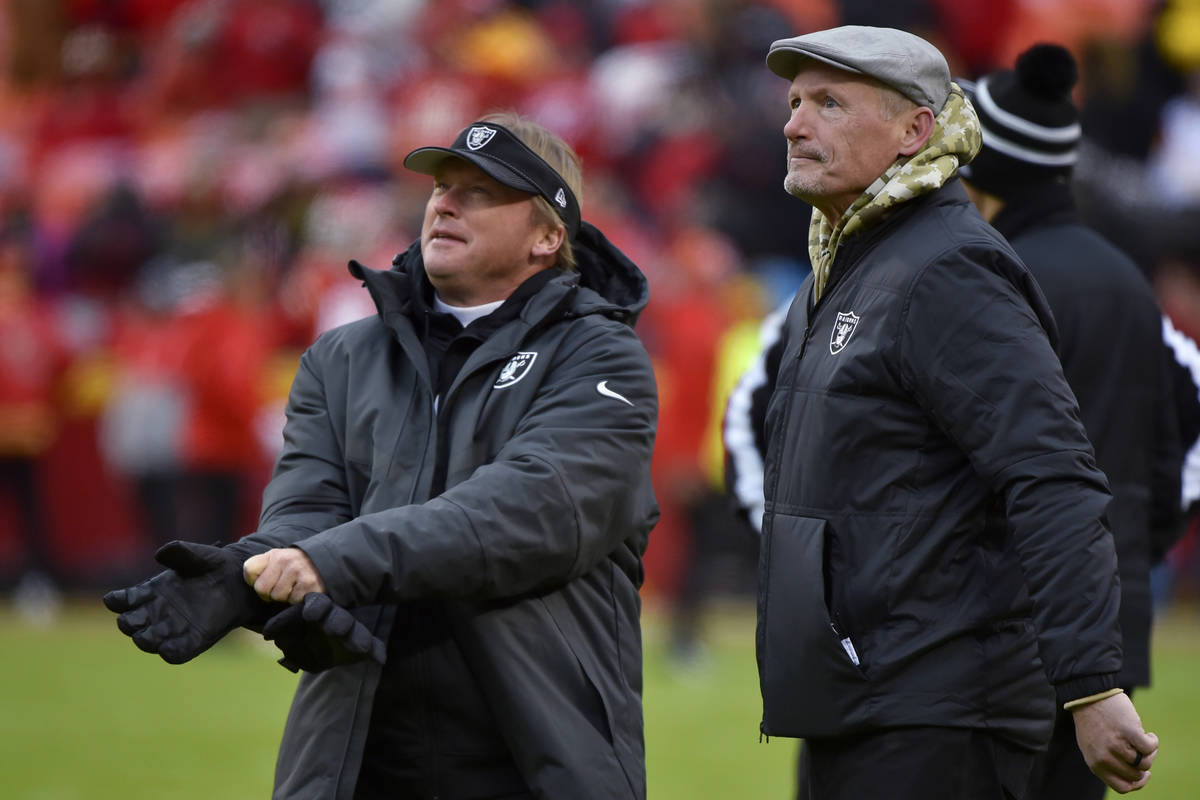 FILE - In this Dec. 1, 2019, file photo, Oakland Raiders general manager Mike Mayock stands with coach Jon Gruden before the team's NFL football game against the Kansas City Chiefs in Kansas City, Mo. Mayock's first rookie class as general manager of the Raiders was an extremely productive one. Whether this year's class can perform in similar fashion could help determine whether the Raiders can be a playoff contender in the AFC in their first season in Las Vegas. (AP Photo/Ed Zurga, File)

EDITOR’S NOTE: Review-Journal Raiders beat writer Vinny Bonsignore is a regular presence at the team’s new training facility in Henderson and a veteran observer of the NFL. These are his insights on the team as it prepares to begin the 2020 season.

The Raiders have done a good job under Jon Gruden and general manager Mike Mayock of retooling the offense the past three offseasons. The result is the best collection of talent in years and a solid supporting cast for Derek Carr as he heads into Year Three under Gruden and offensive coordinator Greg Olson. It’s the first time in Carr’s career he’s enjoyed that kind of continuity, and that was reflected in a strong training camp in which he was the best player on the field most days.

Adding right tackle Trent Brown and left guard Richie Incognito last offseason was a stroke of genius. Their additions transformed the Raiders’ offensive line into one of the best in the NFL. The key now is keeping that line healthy. The group lost 15 starters to injury and by the end of the season resembled a MASH unit.

The Raiders are intent on helping their line get through the season intact, so expect the team to monitor playing time and get veterans rest when they need it.

The same will be the case for Josh Jacobs, who set a franchise rookie rushing record with 1,150 yards but played in just 13 games while missing three of the last four. Jacobs’ absence down the stretch played a big role in the wheels falling off the Raiders’ offense, which averaged 23 points a game over the first nine games but stumbled to just 15 points per game over the last seven.

If Jacobs can stay healthy, he and tight end Darren Waller (90 catches for 1,145 yards), and slot receiver Hunter Renfrow (49 catches for 605 yards) and rookie wide receivers Henry Ruggs from Alabama and Bryan Edwards from South Carolina give Carr plenty of weapons.

Ruggs and Edwards were both impressive during camp, and Edwards might have to play sooner rather than later after Tyrell Williams tore his labrum in camp. It isn’t yet known if Williams will miss any games, but his injury is sure to create playing time for Edwards.

The wide receiver group finally has depth. Zay Jones and veteran Nelson Agholor are both in the best shape of their careers and have played with a purpose during camp.

But it all comes down to Carr, who looked dynamic in camp and more comfortable than ever, mostly because of his familiarity with Gruden’s scheme and a much better supporting cast.

The Raiders invested heavily in the offseason on defense for obvious reasons. This group let them down repeatedly the last two years.

The heavy investment, which included the free-agent additions of linebackers Cory Littleton and Nick Kwiatkoski, was reflected in a much faster and athletic-looking defense in training camp, although the challenge now is translating that to actual games.

Littleton is a three-down defender who adds one of the highest levels of pass defense of any linebacker in the NFL. He is also a solid run defender. Similarly, Kwiatkoski can play both the pass and the run, and will not have to come off the field no matter the down or distance. It’s been a while since the Raiders had one linebacker capable of that, let alone two.

If Littleton and Kwiatkoski merely repeat what they’ve done in Los Angeles and Chicago, the Raiders’ defense will take a big step forward.

Newly acquired Raekwon McMillan is expected to win the starting job alongside the other two newcomers, but keep an eye on rookies Tanner Muse and Javin White, a pair of youngsters whose potential has impressed the Raiders.

The defensive line has tons of potential as well, with newcomer Maliek Collins joining Maxx Crosby, Clelin Ferrell and either Johnathan Hankins or Mo Hurst as the starting group. Depth will be provided by Carl Nassib, who the Raiders signed in free agency, and Arden Key, a former third-round pick who seems to have turned the corner in his third season.

The Raiders drafted Damon Arnette with the 19th pick in the draft, and the former Ohio State star has looked comfortable running with the starting unit throughout camp. Opposite him is second-year CB Trayvon Mullen, who came on strong over the last half of his rookie season and appears set as the other starter.

Behind them, Johnathan Abram is back after suffering a season-ending shoulder injury in the first game last year, with newcomers Damarious Randall and Jeff Heath and veteran holdover Erik Harris battling for the job opposite him.

This is a young, fast, athletic group with tons of potential. The issue is, without the benefit of a regular offseason, plus a highly condensed training camp in which all four preseason games were canceled, it might take time for it to all come together.

Daniel Carlson hit the skids over the last part of last season, missing seven of his 26 field-goal attempts. The Raiders, though, didn’t bring in any competition during camp in a clear sign they still believe in the young kicker. Punter A.J. Cole, a gem the Raiders discovered in rookie minicamp last year, averaged 46 yards and has looked great in camp. Hunter Renfrow got a lot of time as a returner in camp along with Agholor and rookie Lynn Bowden.

The Raiders gave Gruden a 10-year contract in 2018 with a clear message: You have all the time you need to get this right. Tired of the Band-Aid approach, they wanted to create stability and a wide-open window for sustained success. In Year Three, the Raiders appear poised to make a big turn. But a lot is riding on Gruden and his offense hitting the ground running and defensive coordinator Paul Guenther quickly getting his new group on the same page.