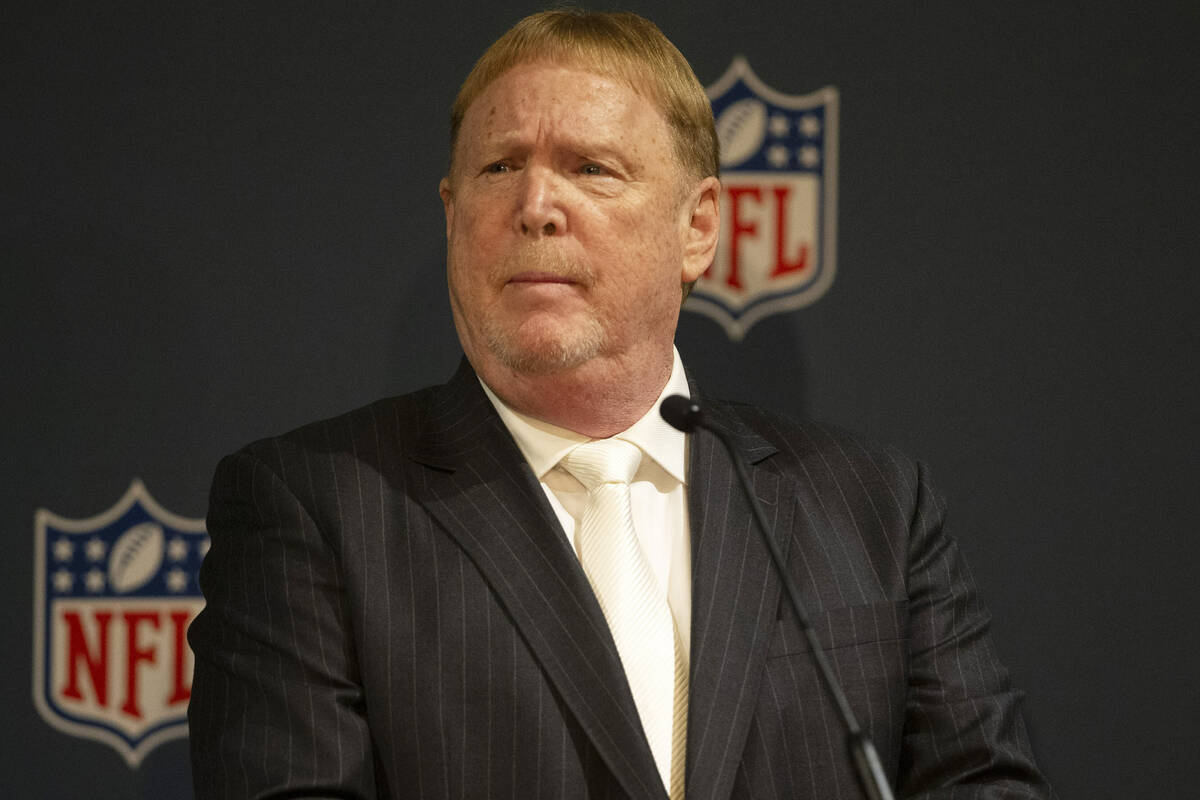 Raiders owner Mark Davis takes questions during a news conference at the Four Seasons Resort and Club Dallas at Las Colinas where it was announced that Las Vegas will host Super Bowl 58 in 2024 on Wednesday, Dec. 15, 2021, in Irving, Texas. (Heidi Fang/Las Vegas Review-Journal) @HeidiFang

Raiders owner Mark Davis expressed frustration Friday with the NFL’s decision to move his club’s game against the Cleveland Browns from Saturday to Monday.

“I do want to make it clear that health and safety is the top priority,” said Davis, whose team currently has no players in COVID protocol. “But the way this went down puts us at a complete competitive disadvantage for a number of reasons.”

The NFL made the decision after a recent outbreak of COVID-19 among the Browns resulted in more than 20 players landing on the COVID list. The new kickoff time is 2 p.m. Monday.

The Raiders learned of the decision as they were boarding buses on Friday bound for the airport for their flight to Cleveland.

Davis said the Raiders had prepared mentally and physically to play the Browns on a short week after playing the Chiefs on Sunday, only to be asked at the last second to extend that preparation and travel process by two days.

The rescheduled Monday game will now interfere with preparation for their game against the Denver Broncos next Sunday at Allegiant Stadium.

“It’s totally unfair,” said Davis, who proposed the idea of the NFL switching the site of the game to minimize the scheduling disruption.

“Maybe Cleveland should come here to play us,” Davis said. “Let them fly across country. Let them lose the day.”

Of equal concern to the Raiders was how they thought the decision deviated from what had been the league’s approach. The NFL had been operating on the premise that if there were enough players to field a team, the game would go on. If not, a forfeit would be declared.

As of Friday, the Browns had enough players to field a team for Saturday’s game.

If that changed by kickoff on Saturday, Davis said, the NFL should adhere to the policy it put in place to start this season.

“The rules stated, at the beginning of the year, that if you don’t have enough players to play, or if you can’t field a team, you forfeit the game,” Davis said. “That was the rule we started with. And that’s the rule we’ve been going by all year.”

The rule actually stated that any forfeit would be a result of an outbreak by unvaccinated players. Every player and staff member involved with the Browns’ situation is reportedly vaccinated.

The 6-7 Raiders are still very much in the playoff hunt, as are the 7-6 Browns. With so much at stake, Davis was frustrated that his team will bear the biggest brunt of the NFL’s decision.

“Again, I’m not saying we don’t want to play them,” Davis said of playing the Browns on Monday. “But it definitely throws off every bit of preparation that we’ve had.”

The Raiders-Browns game is one of three games this weekend being moved. In addition, the Washington Football Team’s game against the Eagles in Philadelphia and the Seattle Seahawks’ game against the Rams in Los Angeles have been moved from Sunday to Tuesday.

“We have made these schedule changes based on medical advice and after discussion with the NFLPA as we are seeing a new, highly transmissible form of the virus this week resulting in a substantial increase in cases across the league,” the NFL announced in a statement. “We continue to make decisions in consultation with medical experts to ensure the health and safety of the NFL community.”

When word began circulating that a postponement was imminent, Raiders players began venting their frustration.

“On behalf of the boys in Vegas, we are ready to play. (I also don’t speak for everyone, so let’s just say “on behalf of myself’),” tweeted linebacker Will Compton.

We agreed that their wouldn’t be any postponed game this season right?! https://t.co/FNtCe0hW2W

Added cornerback Casey Hayward: “Straight b.S!!! @NFL why didn’t you change it for the broncos or the raiders last year?”

Hayward’s tweet was in reference to the Broncos having to play the New Orleans Saints despite all of their quarterbacks not being available because of COVID-19, and the Raiders having to play the Tampa Bay Buccaneers after their starting offensive line missed an entire week of practice while in quarantine.

Raiders players also pointed out how the president of the players union, J.C. Tretter, also plays for the Browns. The NFLPA has been actively pushing the NFL to postpone Saturday’s game.

In a tweet on Friday, Hayward wondered how influential a role Trotter played in getting the Browns’ game against the Raiders moved to Monday.

I’m sure the @NFLPA president playing for the Browns didn’t have any effect on these negotiations… pic.twitter.com/MZ95eVyOiz

Who: Raiders vs. Browns