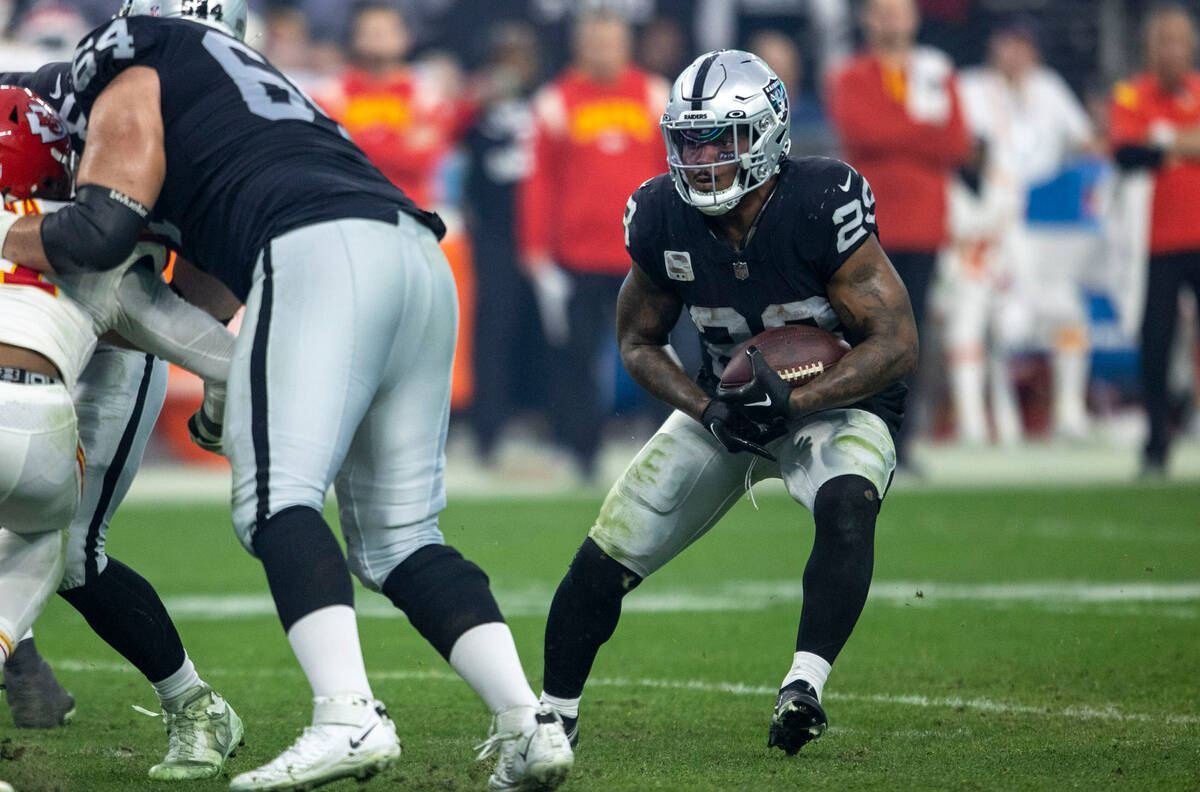 Raiders running back Josh Jacobs (28) looks for room to run against the Kansas City Chiefs during the second half of an NFL game at Allegiant Stadium on Saturday, Jan. 7, 2023, in Las Vegas. (Heidi Fang/Las Vegas Review-Journal) @HeidiFang 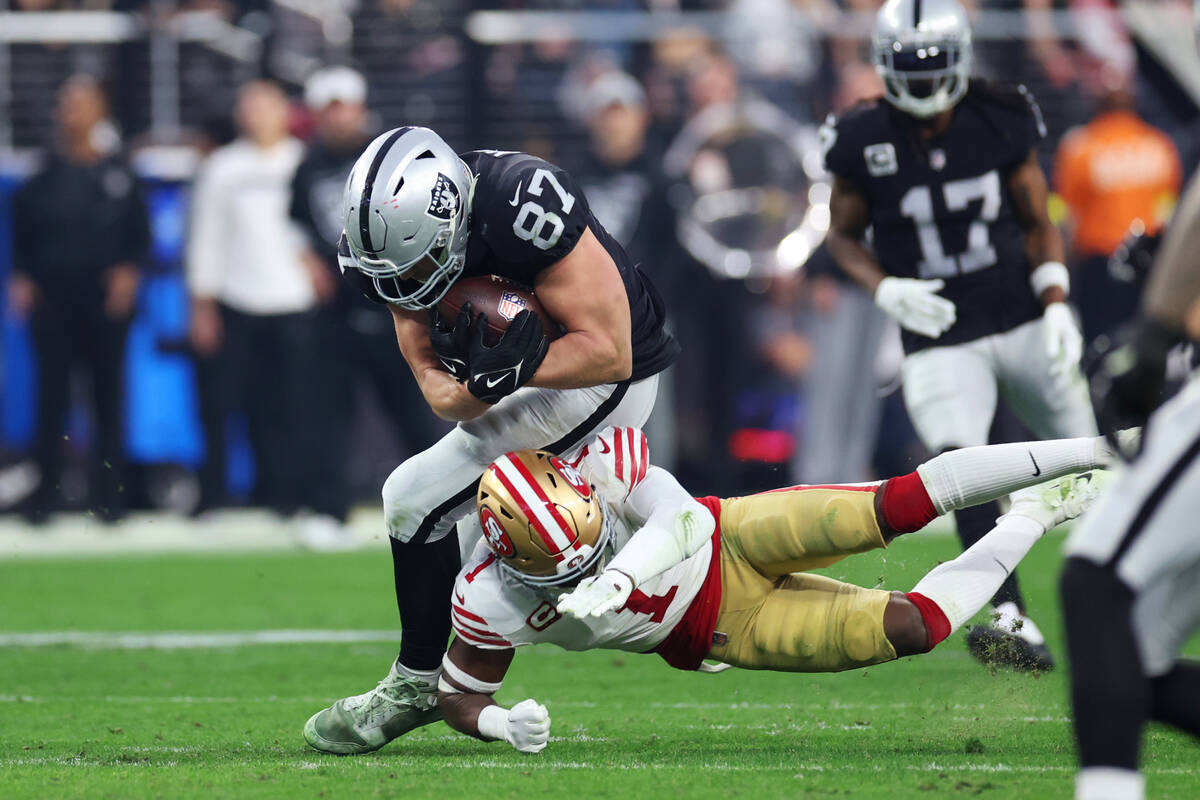 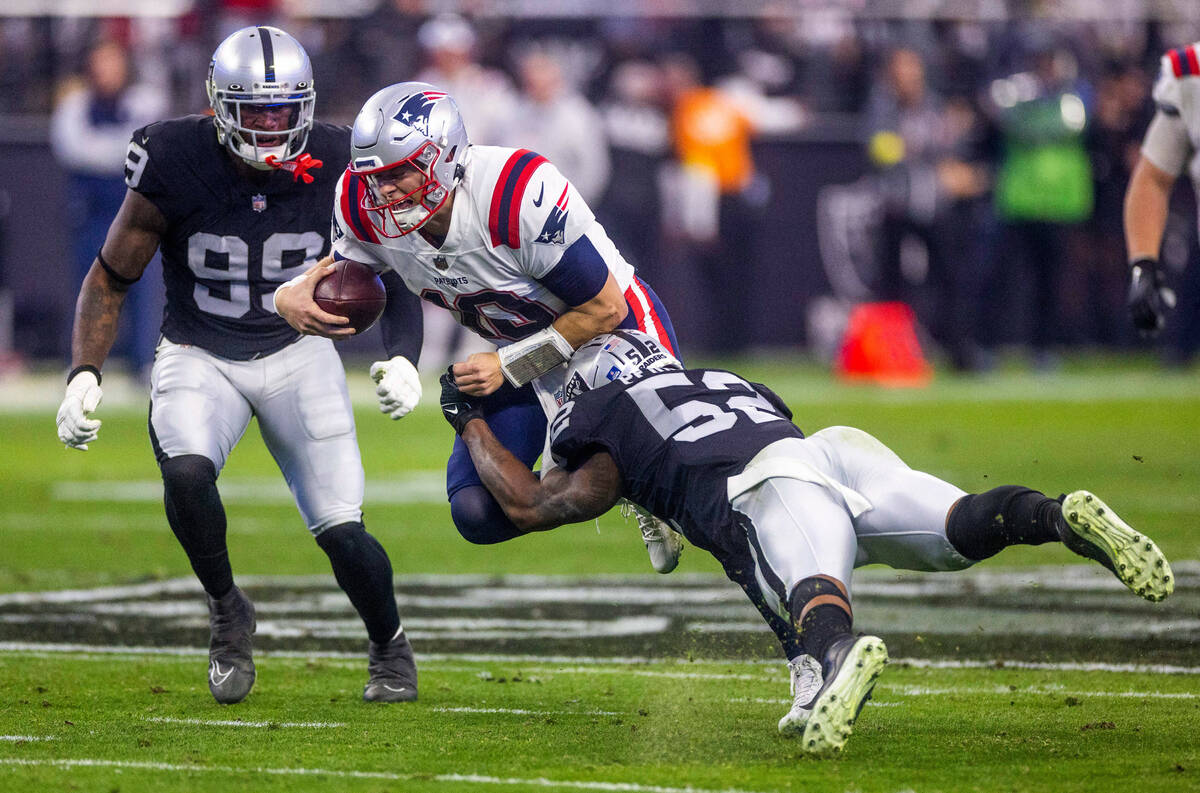 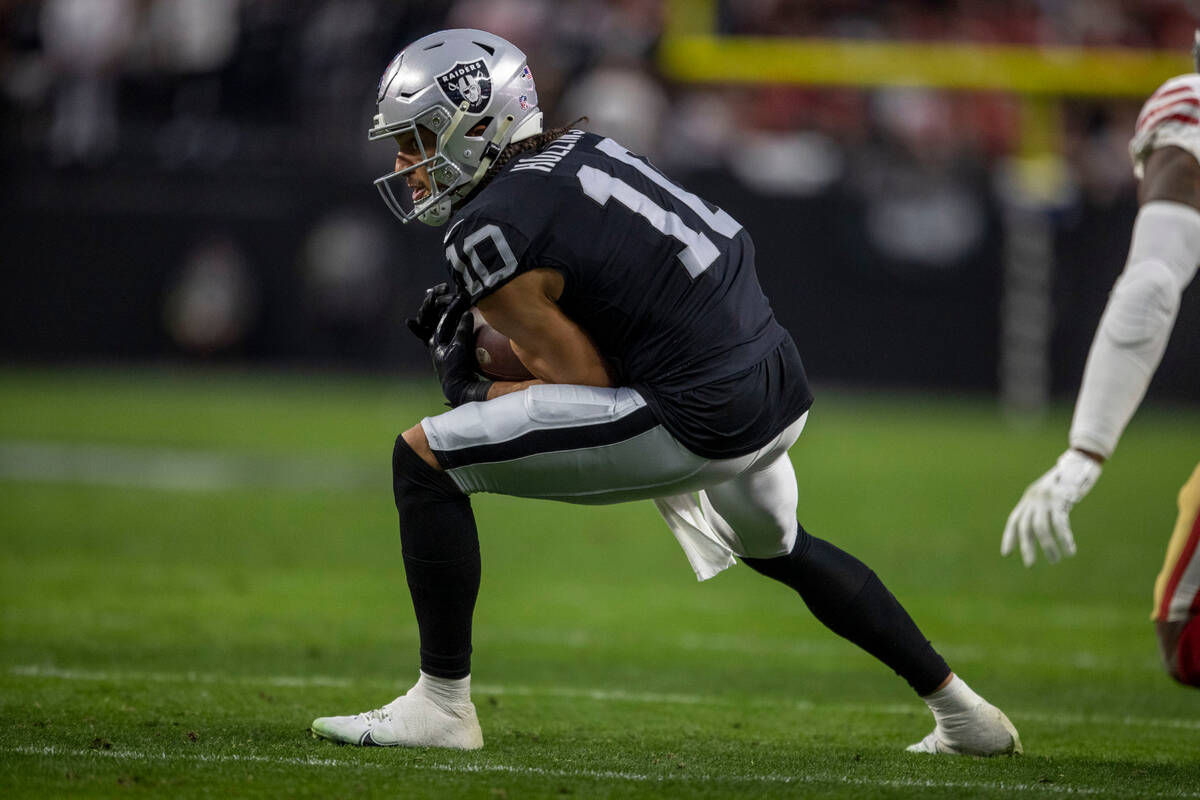 Raiders wide receiver Mack Hollins (10) makes a catch during the first half of an NFL game against the San Francisco 49ers at Allegiant Stadium on Sunday, Jan. 01, 2023, in Las Vegas. (Heidi Fang/Las Vegas Review-Journal) @HeidiFang 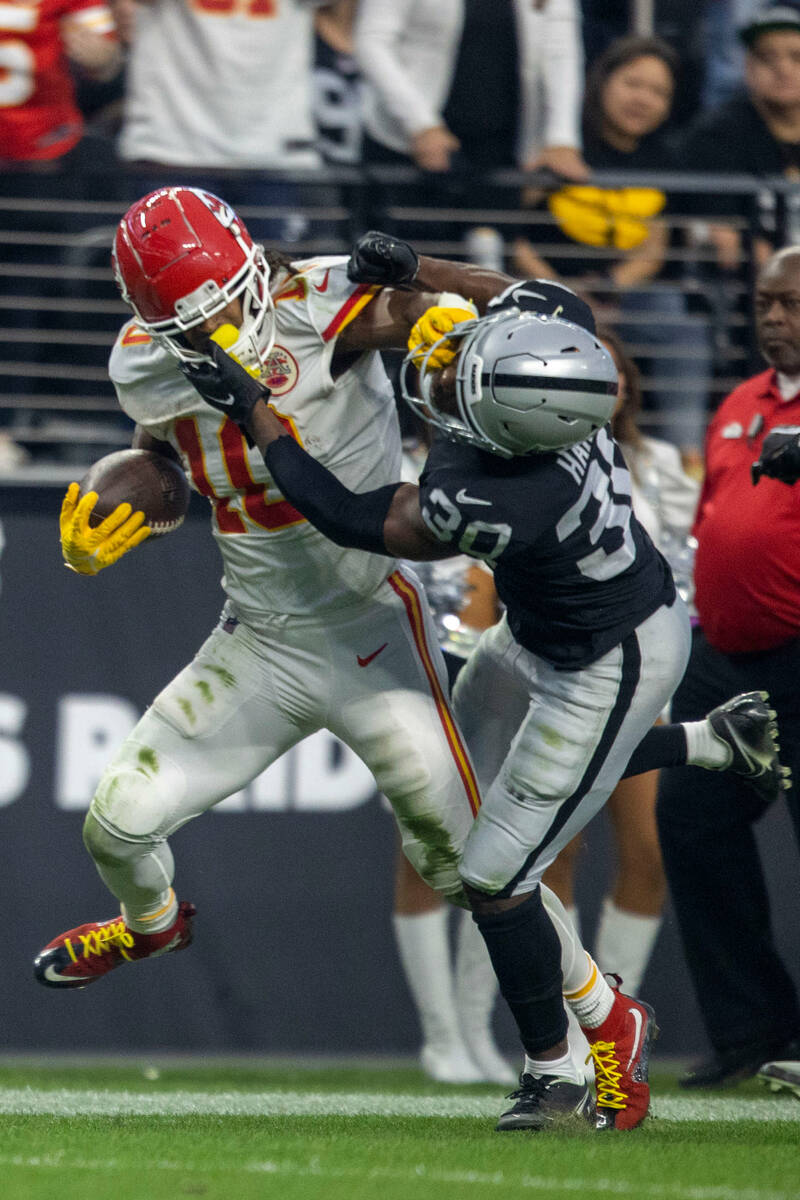 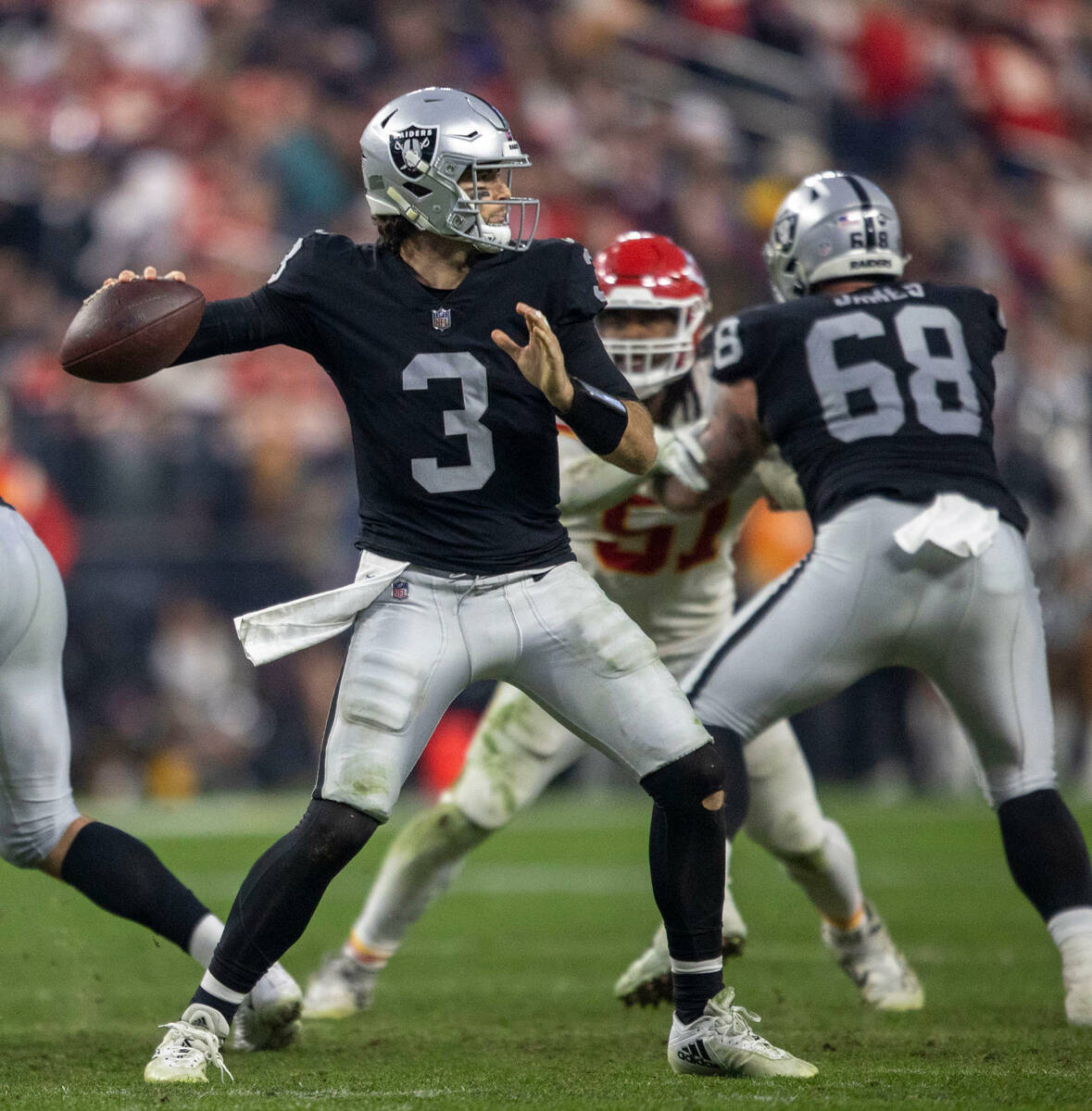 Raiders quarterback Jarrett Stidham (3) throws against the Kansas City Chiefs during the second half of an NFL game at Allegiant Stadium on Saturday, Jan. 7, 2023, in Las Vegas. (Heidi Fang/Las Vegas Review-Journal) @HeidiFang 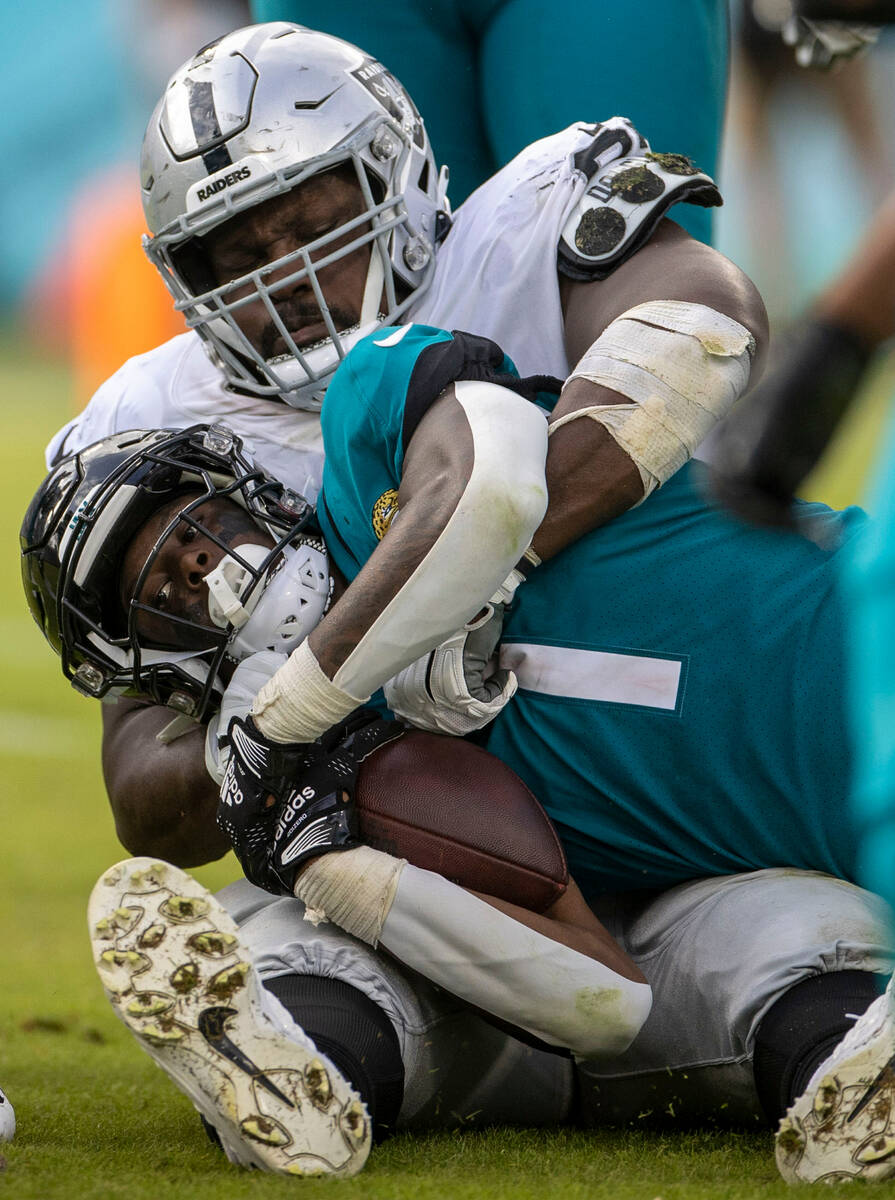 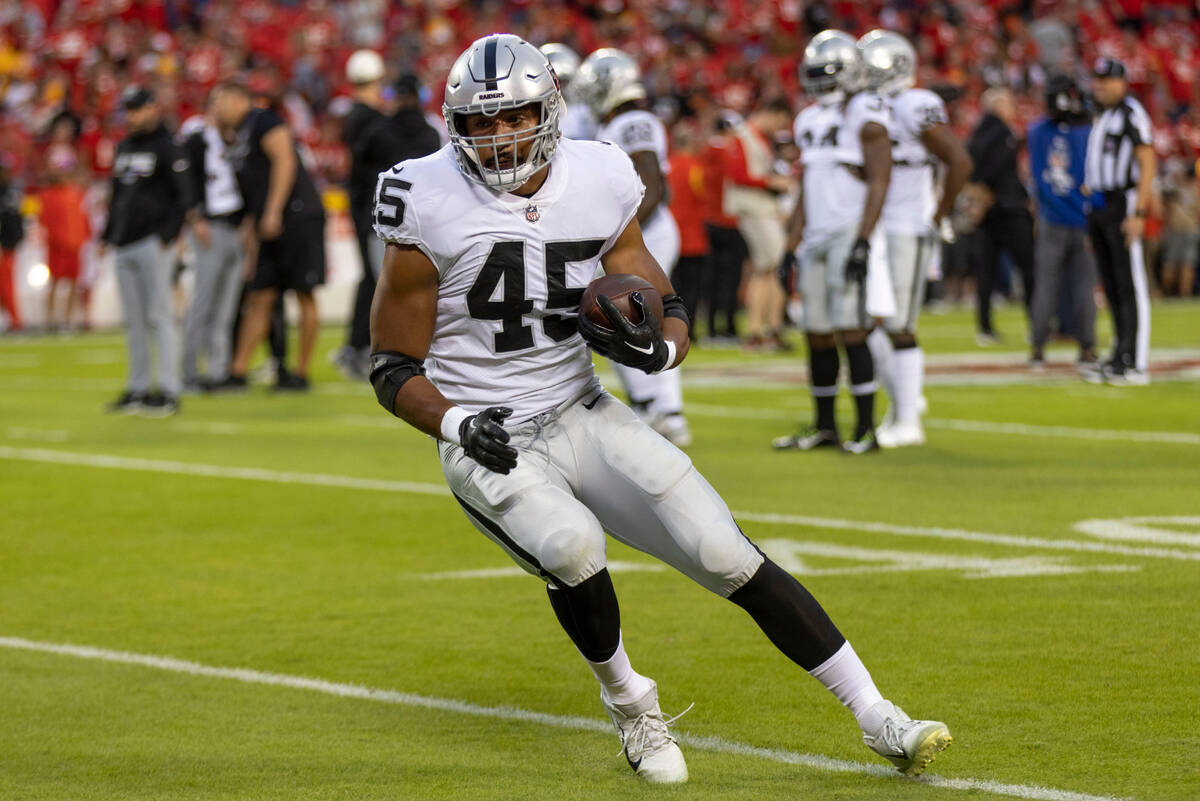 Raiders fullback Jakob Johnson (45) warms up on the field before an NFL game against the Kansas City Chiefs at GEHA Field at Arrowhead Stadium on Monday, Oct. 10, 2022, in Kansas City, Mo. (Heidi Fang/Las Vegas Review-Journal) @HeidiFang 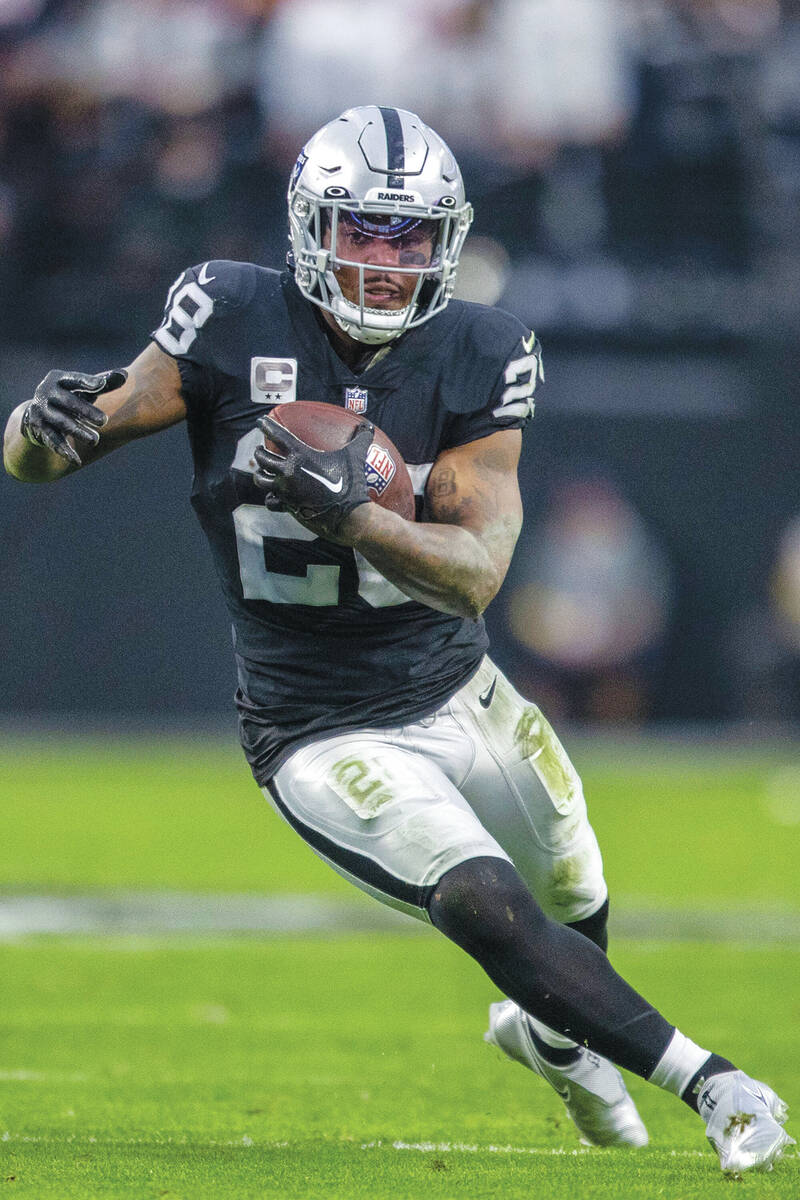 Raiders running back Josh Jacobs (28) runs against the San Francisco 49ers during the first half of an NFL game at Allegiant Stadium on Sunday, Jan. 01, 2023, in Las Vegas. (Heidi Fang/Las Vegas Review-Journal) @HeidiFang 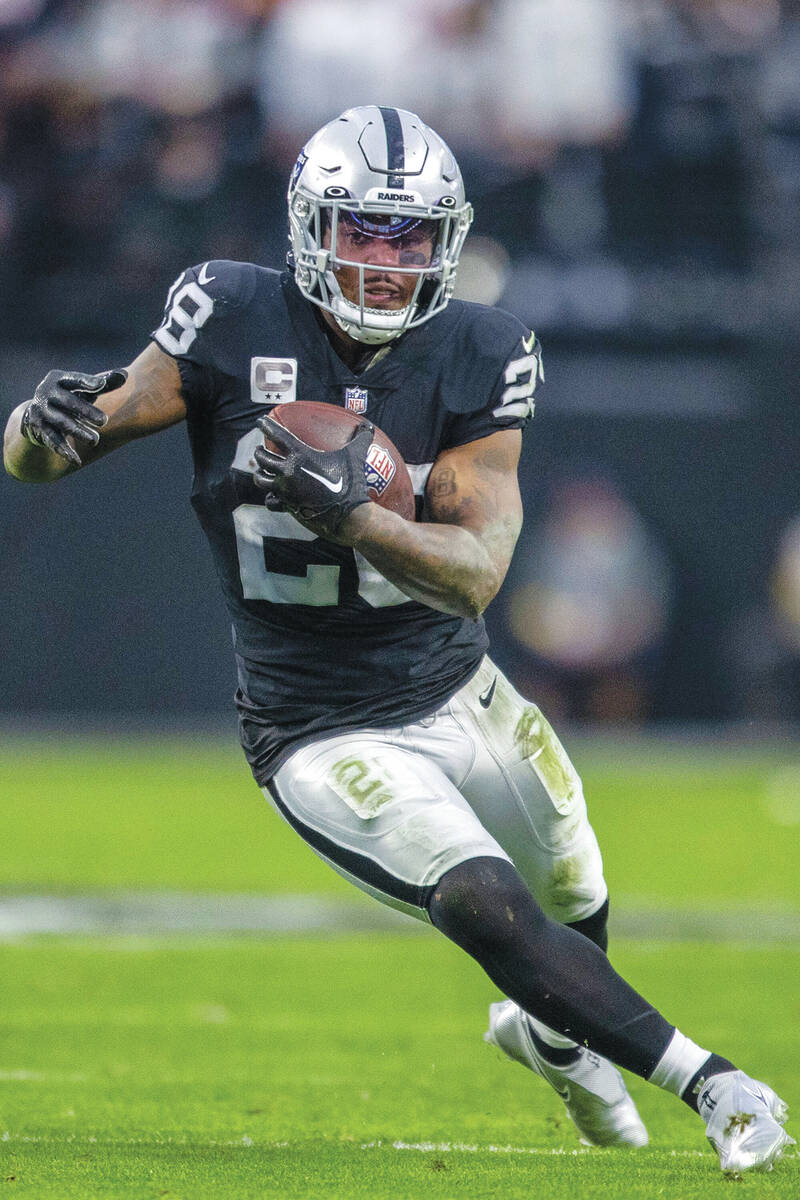 Raiders running back Josh Jacobs (28) runs against the San Francisco 49ers during the first half of an NFL game at Allegiant Stadium on Sunday, Jan. 01, 2023, in Las Vegas. (Heidi Fang/Las Vegas Review-Journal) @HeidiFang

Editor’s note: This is the first story in an eight-part series looking at NFL free agency this offseason and how it relates to the Raiders.

As part of the Raiders’ offseason to-do list, they are taking a deep dive into their roster to determine who to keep for next season.

That includes the 23 players scheduled to become unrestricted free agents in March. The list is led by All-Pro running back Josh Jacobs, linebacker Denzel Perryman and backup quarterback Jarrett Stidham.

A breakdown of players the Raiders should prioritize and ones they have decisions on which to make:

Jacobs had a breakout season, leading the NFL in rushing with 1,653 yards. He came to embody all the characteristics the Raiders have stressed relative to the type of players they want to build around. For everything he means from a production and leadership standpoint, the Raiders can’t let him leave. Spotrac, an online team and player contract resource, lists Jacobs’ market value at four years, $51,409,696 with a $12,852,424 annual average salary. That’s money well spent.

Perryman provided solid value on the two-year, $6 million contract he signed in 2021. If the financials stay in that range, the Raiders would be wise to bring back one of their defensive leaders.

Hollins seized his opportunity to be a front-line wide receiver and posted career highs with 57 catches and 690 yards. He also was his typical stalwart on special teams. Hollins isn’t expected to break the bank — Spotrac lists his market value at one-year, $2.4 million — so he should fit fine in the Raiders’ payroll.

Johnson was a low-key big part of Jacobs’ breakout season as a lead blocker. Having played for Raiders coach Josh McDaniels in New England, he understands the offense and his role, which makes him worthy of another season in Las Vegas.

The Raiders are hoping young safeties Tre’von Moehrig and Isaiah Pola-Mao take big steps forward next season, but they will also look to the draft and free agency for help. That said, Harmon represents an inexpensive, veteran steadying force who can still play at a high level while offering the younger players guidance.

Stidham showed in his two-game stint this season that he can be counted on as a spot starter, with the potential to be even more. The Raiders should have a good idea early in free agency of what their quarterback situation looks like, and Stidham could figure in anywhere from being the 2023 starter to a valuable backup.

He could come in around $5 million per season, though it might be a situation in which the Raiders let him test the market to see if there are any starting opportunities and more money for him.

Billings turned in a solid season as a run-stuffer, and while the Raiders will look to upgrade the interior of their defensive line, there should be room for Billings as a rotational player.

The Raiders value Moreau as a complement to Darren Waller. When asked to play his role as a blocker and someone who fits in the passing game, Moreau capably carried out his assignment. Spotrac lists Moreau’s market value at four years, $36.1 million with an annual salary of just over $9 million, so money could come into play.

Eluemunor turned himself into a steady and capable right tackle. Two things come into play, though: The Raiders have prioritized improving the offensive line, with right tackle among the positions they hope to upgrade. That could mean Eluemunor being viewed as a swing tackle, which might not be how he views himself. That could lead him to test the free-agent market.

As an interior pass-rush specialist, there is a role for the former first-round pick on the team. But Tillery might see himself as more than a rotational piece and could seek out a team that sees him as such in free agency.

Ferrell was a solid role player this season, and the Raiders will view him as such when contemplating re-signing him. He could look for a fresh start somewhere else, though he is probably looking at a one-year prove-it deal whether it’s in Las Vegas or elsewhere.

Ya-Sin was ranked by Pro Football Focus as the 50th-best cornerback in the NFL this season. The Raiders need better than that. On a reasonable contract in which he will compete for a role, Ya-Sin would represent value. He might be looking for more than that, and chances are someone will pony up. The Raiders should resist, though.

The veteran running back forged a role as a third-down back and special teams ace, and at the right price, the Raiders should consider retaining him. But he owes it to himself to test the market.