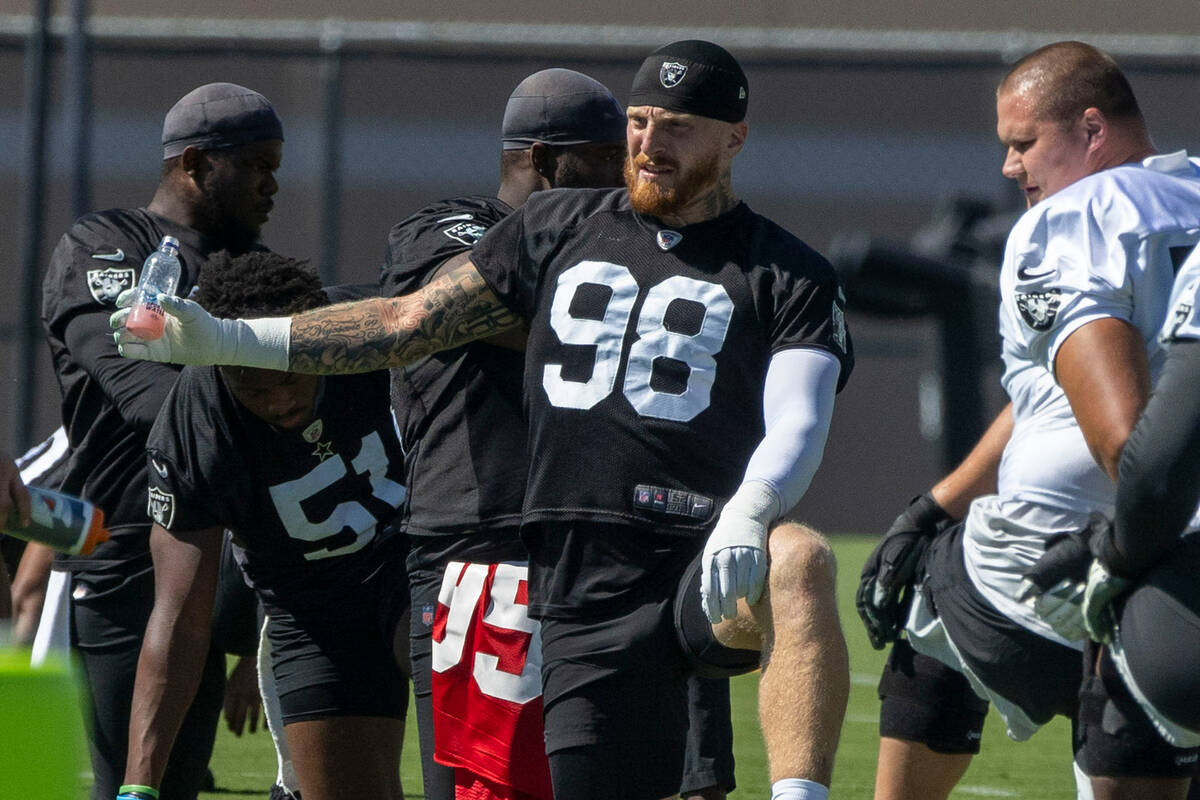 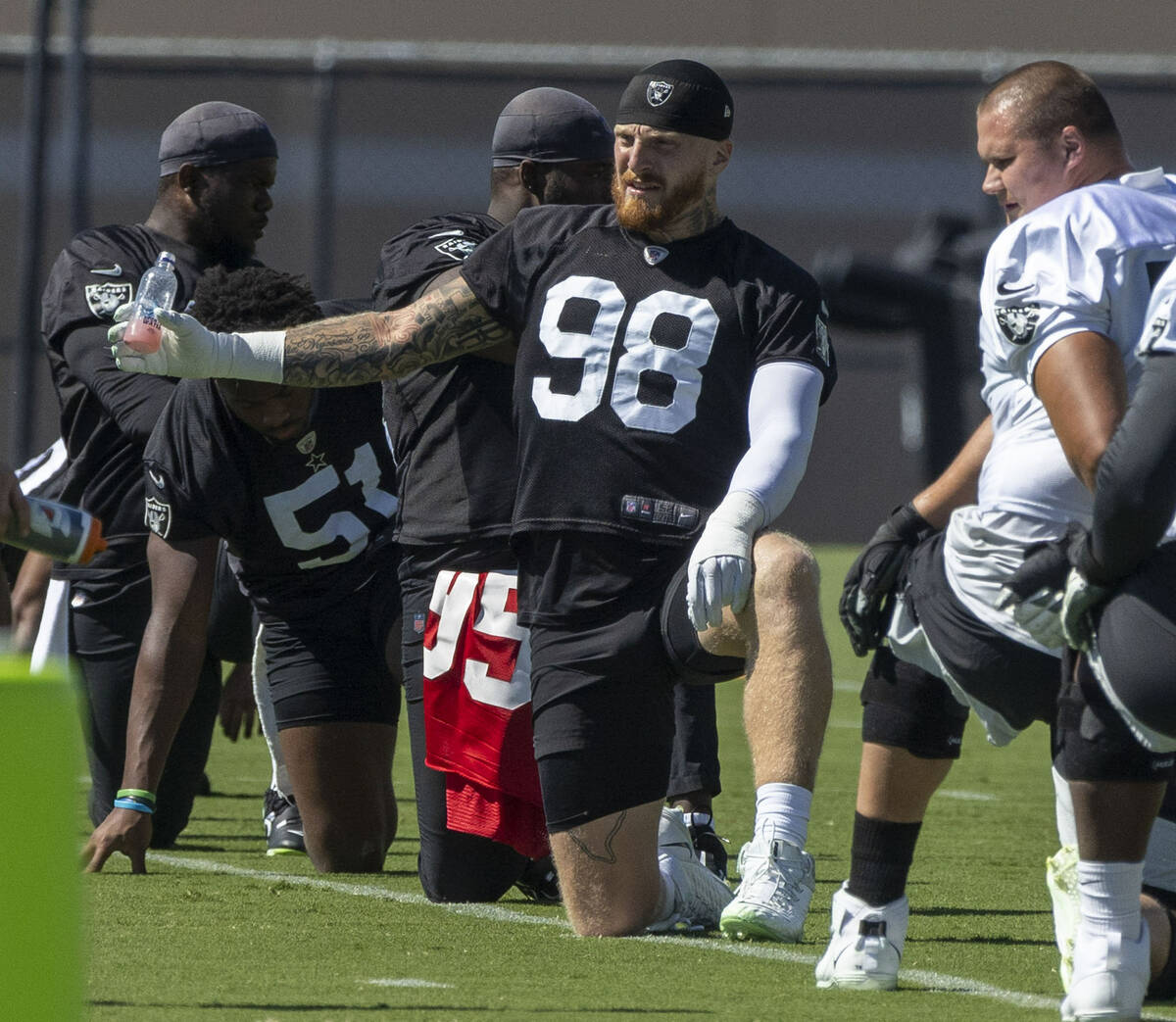 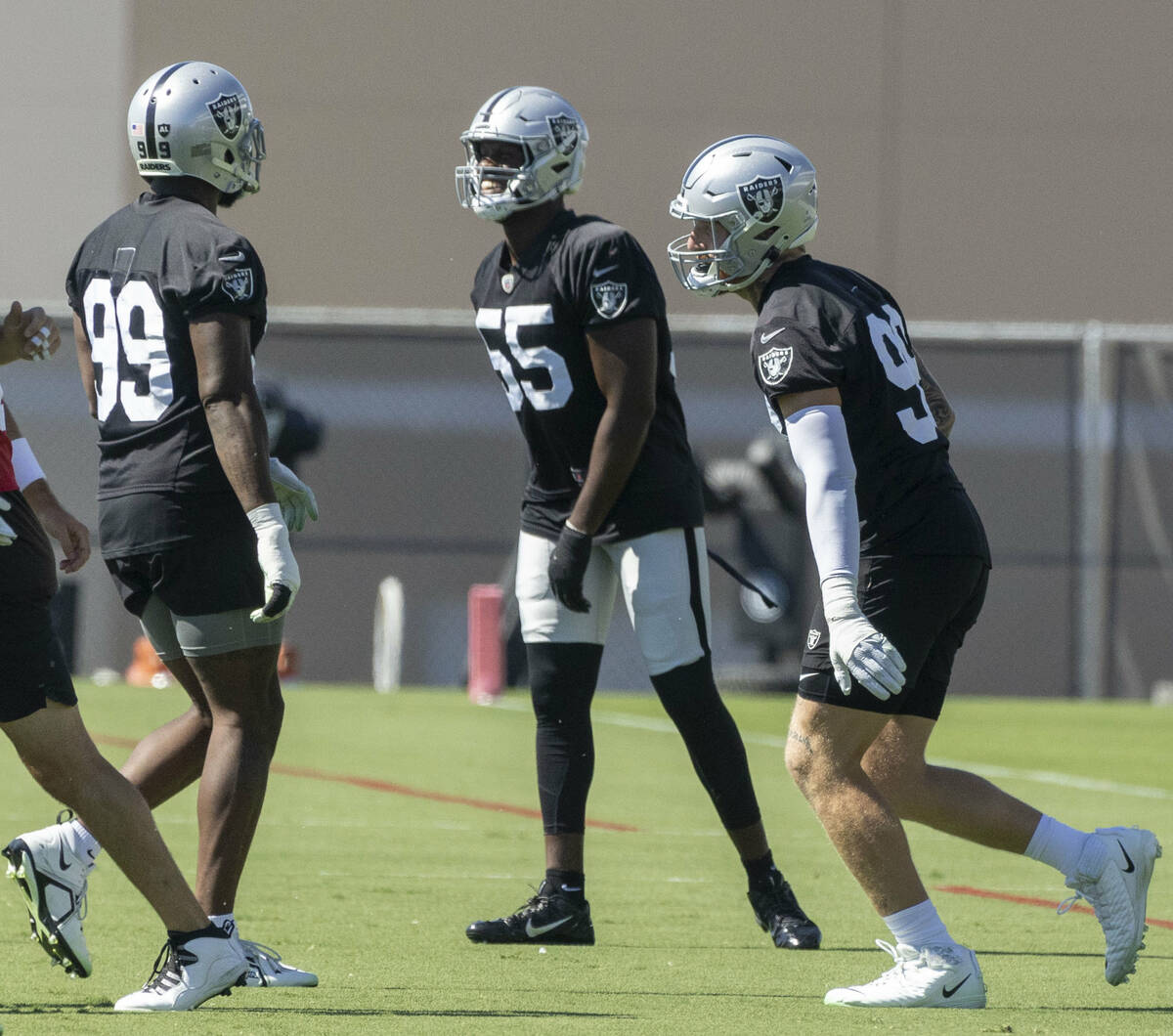 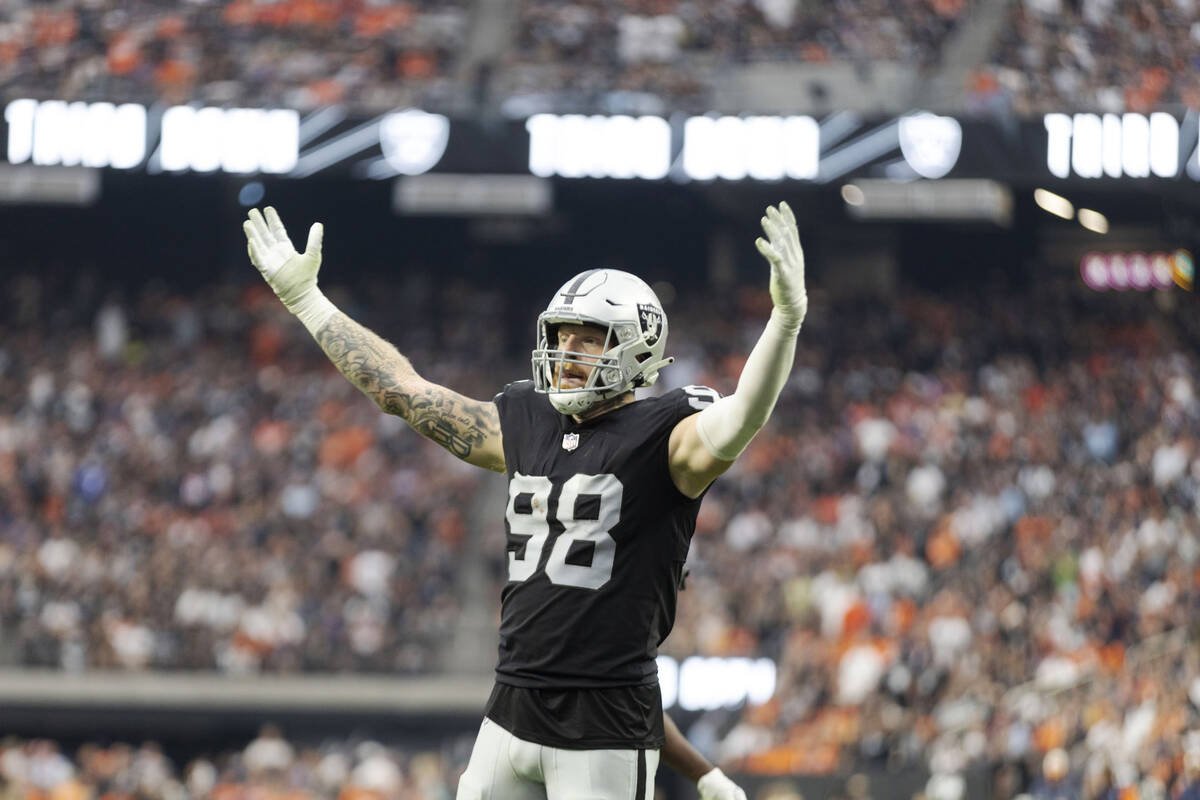 Raiders defensive end Maxx Crosby (98) tries to rally the crowd on a third down play against the Denver Broncos during the second half of an NFL game at Allegiant Stadium on Sunday, Oct. 2, 2022, in Las Vegas. (Heidi Fang/Las Vegas Review-Journal) @HeidiFang

Raiders defensive end Maxx Crosby is ready to be a father. He’s just as ready for the questions to stop.

“It has gotten annoying,” he said Wednesday of the constant barrage of queries about whether his fiancee, Rachel, has given birth yet. “Every single day I walk in, right away, ‘Is the baby here? What’s the news?’ It’s almost like you have a fake baby and you’re lying to people.

“Stop asking me the same damn question. You’ll know when the baby is here.”

The baby girl, who is to be named Ella Rose, was due on Monday. Crosby laughed as he recalled waking up that morning, less than 24 hours after he had two sacks in the team’s first win of the season, to find a bed usually occupied by Rachel and their several dogs completely empty.

“She’s downstairs sitting on the yoga ball bouncing in the living room and it’s still dark outside,” Crosby said. “I was like, ‘This needs to stop.’ It’s throwing me off. I’m just honestly ready for the baby to be here.”

Her choice of activity can possibly be blamed on coach Josh McDaniels, a father of four. The coach has a vested interest in the birth not impacting Crosby’s availability for this Monday’s game against the Chiefs in Kansas City.

“I’m on watch, too,” McDaniels said. “I’d like to have them have this celebration here before we travel. But we’ll have plans in place, obviously, if we need to do that. I was trying to tell him the other day a few tricks. I haven’t used them, but my wife has. When it’s time to get going, sit on the ball and bounce and all that stuff.

“So you’re trying to give him help and advice in any way you can, not just football.”

The Raiders won’t release a formal injury report until Thursday because they don’t play until Monday.

Wide receiver Hunter Renfrow was back on the practice field, however, for the first time since suffering a concussion late in the loss to the Cardinals on Sept. 18.

He was in a red jersey, meaning he has not fully cleared concussion protocol.

“We’re in a noncontact phase at this point,” McDaniels said. “So, again, just going one step at a time and hopefully he can progress through that. But we’ll take it as they tell us to take it.”

Linebacker Denzel Perryman is also going through the protocol and was not seen on the practice field during the portion open to the media. Perryman left Sunday’s game with a concussion.

“There are things he has to go through and pass in order to kind of keep moving forward in the protocol,” McDaniels said. “First of all, I don’t have a medical degree and I’m not a doctor, but I know that each one of them could be different. Hunter was different than Nate Hobbs, than Andre James. So, whatever happens, we have all those steps in place. … Nothing to update on Denzel yet.”

Concussions have been a hot topic in the league this week, largely due to the scary scene that unfolded in Cincinnati with Miami Dolphins quarterback Tua Tagovailoa on Thursday.

The league and players’ association have been working toward an updated policy on treatment of head injuries, a process McDaniels welcomes.

“I would say, whatever they do, it’s for the right reasons,” McDaniels said. “There’s nothing more important than the health of the team. We talked about that this morning. We’ve had a few here in a few weeks. I don’t think we’re doing anything different on gameday than anybody else is doing.

“But when the players don’t feel either themselves, or don’t feel right, we’re urging them to make sure that they communicate that and do the right thing for their health.”