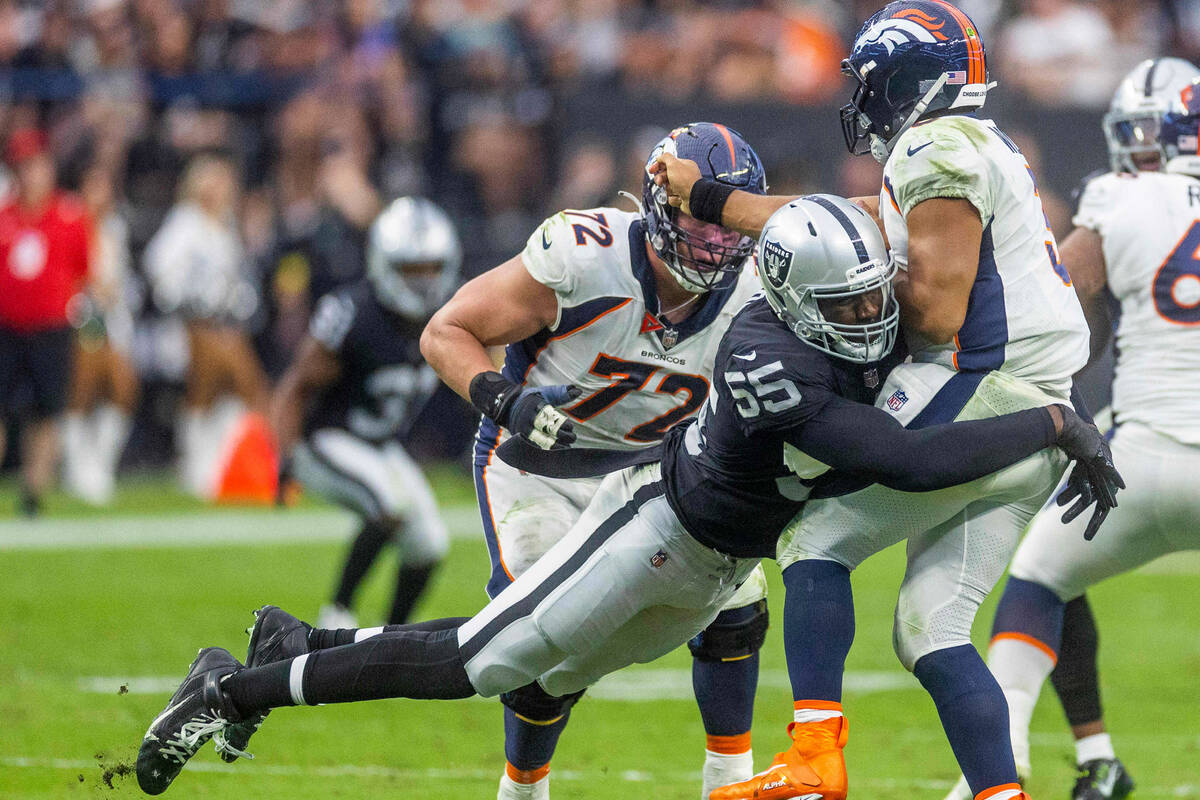 It would be difficult to find any kind of statistical measure by which Chandler Jones has made the significant impact the Raiders expected when they signed him to a massive free-agent deal this offseason.

That doesn’t mean he hasn’t made his presence felt for the improved defensive unit.

“He’s making a lot of plays that don’t show up in the stats,” coach Josh McDaniels said on Monday. “And that’s probably going to be not good enough for everybody to listen to, but he’s making plays in the running game. He drew multiple holding penalties yesterday. I mean, there is ways to produce and there is a way to impact the game beyond just the one column that everybody’s looking for.”

The 32-year-old Jones doesn’t have a sack in four games, the longest drought to start a season in his professional career. He’s been credited with eight quarterback pressures, tied for 52nd among edge rushers in the NFL, according to Pro Football Focus.

That same site gave Jones by far his best grade of the season on Sunday as he started to make his presence felt.

McDaniels said Jones and the rest of the group up front put a lot of pressure on the Broncos’ offensive line and allowed plays to be made behind them.

“I think impact is sometimes, if you look at it and measure it just by the one column, you can misjudge it a little bit,” McDaniels said. “I like the way he’s playing. I like the effort he’s playing with.”

Jones has also earned the respect of his teammates, including his neighbor in the locker room, Divine Deablo.

“I ask him questions every day,” the linebacker said. “He’s on the details. I love him. He helps us out a lot.”

Denzel Perryman left Sunday’s game to be checked for a possible concussion. McDaniels confirmed Monday the Raiders’ linebacker is in the league’s protocol.

“We’ll be working through that this week,” McDaniels said.

After Sunday’s win, Maxx Crosby said the number of Broncos fans at Allegiant Stadium was noticeable.

Center Andre James added Monday their presence actually had an impact on the offensive signal-calling. “We had to do some silent count, which we weren’t expecting.”

The next home game is on Oct. 23 against the Texans, a fan base that traditionally doesn’t travel exceptionally well.

The Raiders lined up Josh Jacobs at fullback for a short-yardage play against the Cardinals in Week 2 and gave him the ball as the first man through. He picked up a first down.

McDaniels took advantage of the Broncos seeing that play on film with a key third-down play call on Sunday.

Jacobs lined up at fullback on a third-and-2 play on what proved to be the game-clinching drive. While Denver’s defense pointed it out and appeared to believe it had the play sniffed out, the Raiders used Jacobs as a decoy and tossed the ball wide to Zamir White for a big gain instead.

“They noticed he was out there (at fullback), which they should, it’s a good defense,” McDaniels said. “We felt like we might have an edge to get the ball to the corner if everybody was going to try to play inside, so I thought Derek did a good job of making a good pitch and then Zamir obviously outran everybody to the corner.”

Jacobs ran for a career-high 144 yards, but the Raiders also believe they have a special talent in White. The only issue is that Jacobs never seems to need a break, according to McDaniels.

“I think that’s a tribute to the kid and how much he loves football, how hard he competes on a play after play basis,” McDaniels said of Jacobs.