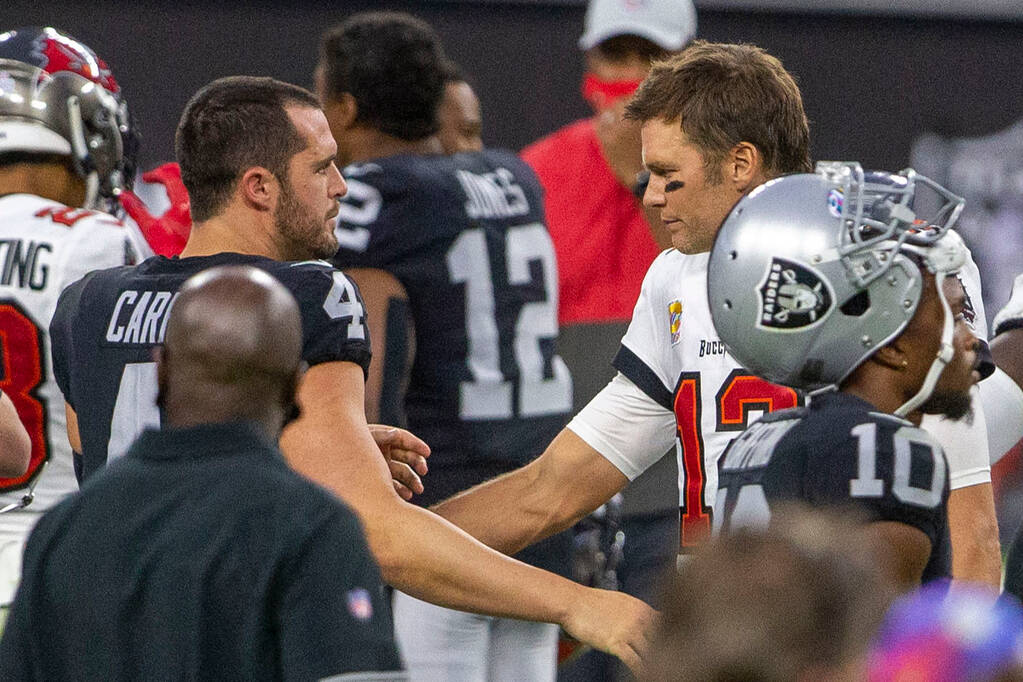 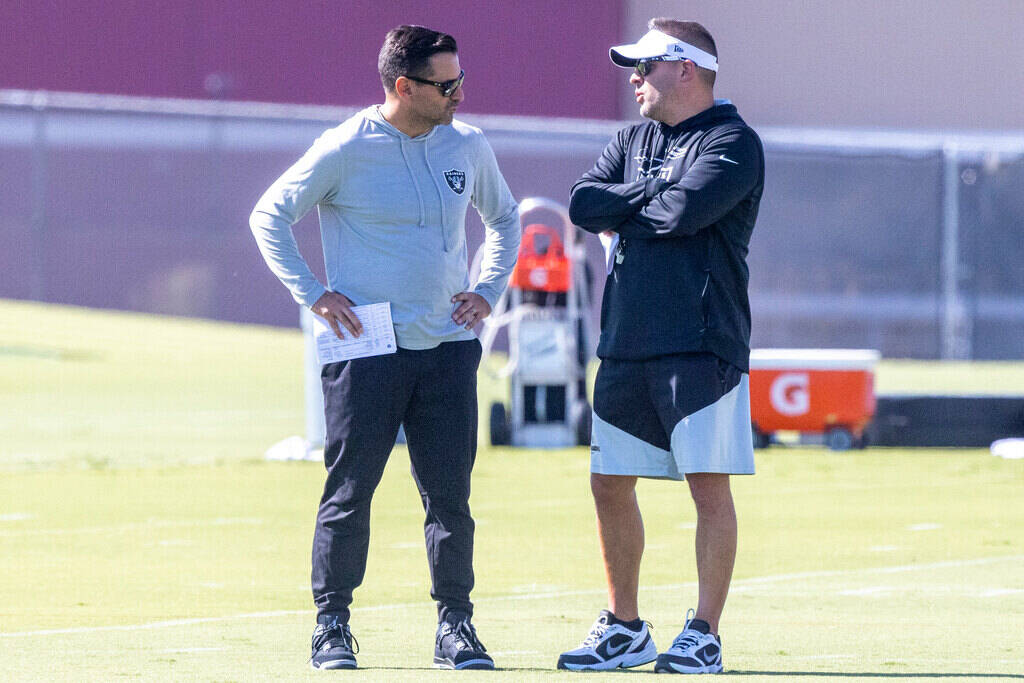 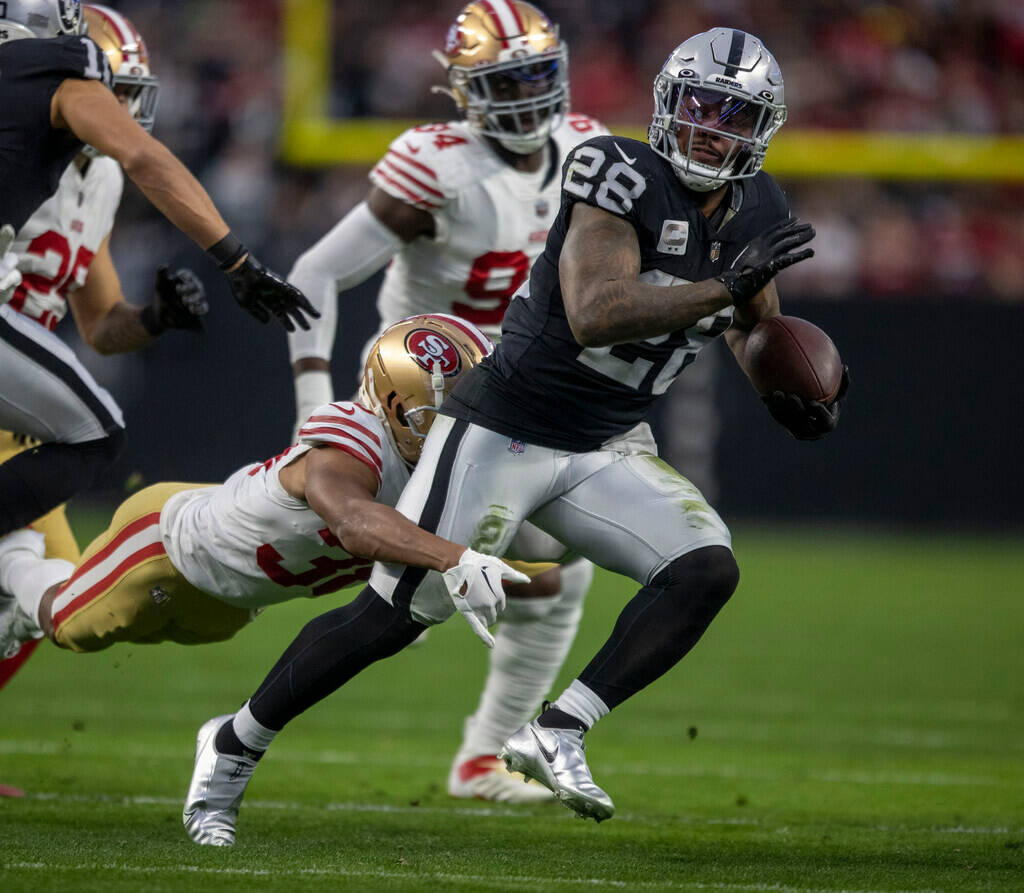 Raiders running back Josh Jacobs (28) runs as San Francisco 49ers cornerback Deommodore Lenoir (38) attempts to tackle him during the first half of an NFL game at Allegiant Stadium on Sunday, Jan. 01, 2023, in Las Vegas. (Heidi Fang/Las Vegas Review-Journal) @HeidiFang

The Raiders’ transition from longtime quarterback Derek Carr, a decision that had been brewing for more than a month and came with the blessing of owner Mark Davis, was the first key domino to fall in what is bound to be an eventful next five months.

Fair warning: Get used to hearing about Tom Brady and Jimmy Garoppolo, both of whom are attractive options for the Raiders at quarterback should each become available in free agency.

As emotional as the decision might have been to bench Carr, it was surprisingly easy by the time it was made. Between the financial risks of continuing to play him and the Raiders’ diminishing confidence in him, it was time to move on.

What follows next is of far more significance as the Raiders try to balance two objectives.

The first is maximizing the return on what amounts to a two-year window of core players — Davante Adams, Maxx Crosby, Darren Waller, Chandler Jones and Hunter Renfrow — and almost assuredly Josh Jacobs, whom the Raiders appear determined to keep on a new contract.

The second is rebuilding a roster that has been victimized by years of ill-advised drafts, free agency and trade decisions in a way that creates the sustainable success Davis craves.

The Raiders, led by general manager Dave Ziegler and coach Josh McDaniels, believe they can concurrently manage both tasks. But they will not overreach to improve the present if it means jeopardizing the future. Even if that means the possibility of taking a step back to eventually complete their ultimate goal of perennial success.

Based on conversations with NFL sources familiar with the Raiders’ thinking, here is an educated guess at what is coming in the following months.

The Raiders concluded Carr was not a long-term fit within weeks of the start of the season. Benching him eliminated the risk of a $40 million injury guarantee kicking in had he gotten hurt in the final two games of the season.

The Raiders were determined not to be handcuffed to a quarterback they no longer believed in and one who represented a major drag on their 2023 salary cap.

They would prefer to trade him to recoup draft assets. The Saints, Jets, Commanders and Titans could get involved. But a 2023 roster stipulation means a guaranteed $40 million next season wherever he plays, so how much would those teams be willing to give the Raiders given that they would have to take on that guarantee?

Time will be a factor. The Raiders face a Feb. 15 deadline to make a decision on Carr. If he’s on the roster at that point, the $40 million guarantee kicks in. They could agree on terms on a trade and then wait to announce it when the new league year starts March 15.

To mitigate the risk of a team backing out — and being stuck with Carr and his contract — they and Carr could renegotiate an extension on the deadline that pushes it beyond the start of the league year.

From Carr’s perspective, doing so would help keep intact the three-year, $121 million extension he signed last offseason and the all-important $40 million guarantee.

If the Raiders can’t trade him, they are willing to cut him and move on while incurring a $5.6 million hard salary cap hit.

Brady, if he doesn’t retire and hits free agency, will be a person of interest. So will Garoppolo. Both have significant ties to McDaniels, and each satisfies the all-important trust factor with their former coach.

Depending on how the Aaron Rodgers situation plays out in Green Bay, he also could be an option.

Any of those quarterbacks would help to maximize the core the Raiders have in place and allow them to address other needs through the draft and free agency. An upgrade along the offensive line is a must, as is getting an earnest start on building a championship-level defense.

Jarrett Stidham is not necessarily out of the picture. If the Raiders strike out in adding one of the veterans, he could be re-signed to compete for the starting job. He’s also a candidate to back up one of the big-name targets.

The Raiders figure to do their due diligence on the quarterbacks available in the draft, and a trade to get access to one of the top prospects is a possibility.

The Raiders opted against picking up the fifth-year option on Jacobs’ rookie deal, thus setting up the possibility of him becoming a free agent after the season.

But the decision was never a signal that the club was averse to extending the relationship, and to Jacobs’ credit, he produced a brilliant season by rushing for 1,653 yards and embodying every trait that McDaniels and Ziegler have been stressing about the type of players they want.

Barring a major surprise, the overwhelming sense is the Raiders will bring their star back next season on either a new contract or by using the franchise tag on him.

A big part of the reason Adams is with the Raiders is his friendship and history with Carr. But the sense is, the two aren’t so joined at the hip that Adams will ask out if Carr is no longer on the team.

In fact, Adams has said he “absolutely” wants to return to the team next season.

Expect the Raiders to keep their star wide receiver in the loop as they plot their next move at quarterback.

But they also would be open to working with him should their ideal plans not pan out and he wants to move on to a team with a more satisfactory quarterback situation.

While Ziegler and McDaniels inherited a team that reached the playoffs in 2021 and hoped to build off that momentum with some of the moves they made, nobody inside the Raiders’ building was convinced the roster in place was set up for prolonged success.

Years of bad drafting — including five botched first-round picks since 2019 and the seven-player 2020 draft that has vanished aside from backup cornerback Amik Robertson — left crater-sized holes on the roster and forced the Raiders to perpetually invest money into cleaning up mistakes.

Getting that fixed will be a multiyear proposition, one that begins now as Ziegler and his rebuilt personnel department oversee their first draft and offseason.

The Raiders are under no illusions that this will be an easy fix, especially building a championship-caliber defense they believe is sorely lacking in the physical and mental traits needed to be a formidable unit.