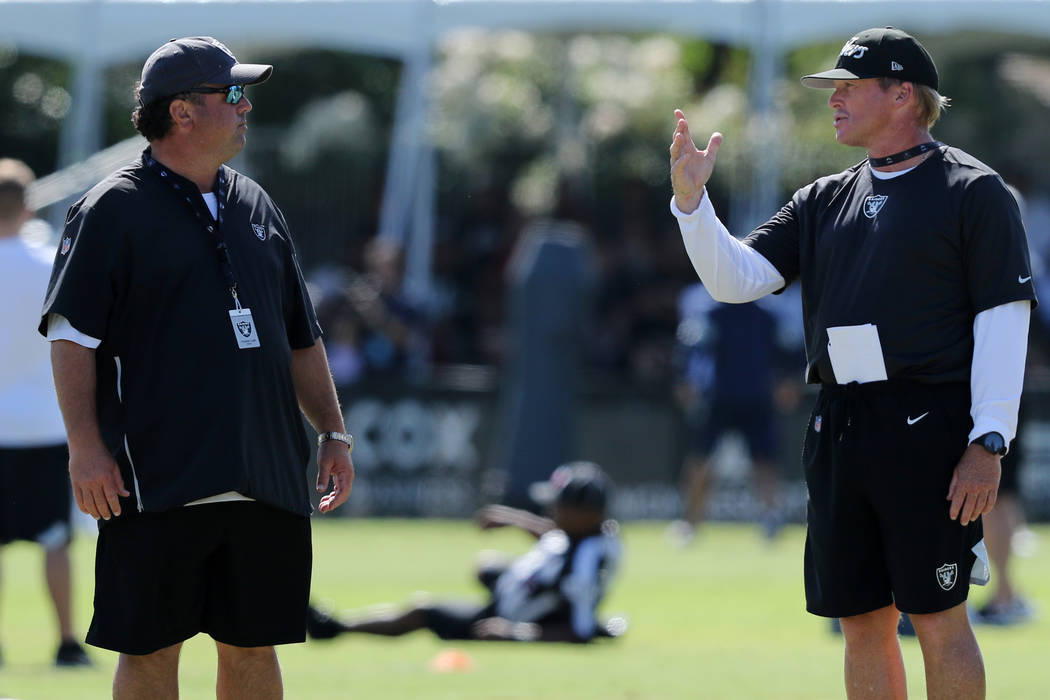 The boos might have rained down on Derek Carr and the Raiders’ offense late in the 42-21 loss the Titans on Sunday, but the fans’ discomfort with their team should have been squarely directed at the other side of the ball.

The Raiders’ defense made the Titans look like the Baltimore Ravens. Anything Tennessee wanted to do, it did.

The Titans racked up 552 total yards and probably could have topped 600 if the game wasn’t over on their final drive. They converted 73 percent of third downs and averaged 9.4 yards per play — 5.0 on the ground, 14.5 per pass attempt. Titans quarterback Ryan Tannehill looked like a future Hall of Famer, completing 77.8 percent of his passes and compiling a rating of 140.4.

The Raiders were inept on defense with the season on the line.

And that should, if they were true to their word of making the Raiders title contenders, send coach Jon Gruden and general manager Mike Mayock into serious deliberations about their defense heading into the offseason — players and coaches.

Fans may be frustrated with Carr and the offense, but everyone knows the issues there. They have no weapons in the pass game outside of Darren Waller. Add a few more in the offseason to the nucleus they have — preferably receivers who don’t have issues with cryotherapy, helmet rules or rules in general — and the Raiders should be cooking with gas offensively in short order.

The defense should be under serious consideration for an overhaul — a complete one.

The first question that needs an answer, because everything else grows from it, is whether Paul Guenther will return as defensive coordinator.

Gruden certainly has a strong personal connection to Guenther — they are friends, going back to Guenther’s time on the Bengals staff with Jon’s brother Jay. And Jon Gruden was able to persuade Guenther to come with him to Oakland over similar offers from Mike Zimmer, Guenther’s mentor in Minnesota, and Jay Gruden in Washington.

And while certainly much of what has gone wrong has been out of Guenther’s hands — the roster is young and there have been injuries at both safety spots and linebacker (plus Vontaze Burfict’s suspension) — Gruden and Mayock now have two years of data with the scheme. Will it ever be good enough?

While Gruden can certainly point to Zimmer’s scheme — Guenther runs the same — in Cincinnati and Minnesota to illustrate its potential effectiveness, the bottom line is that 4-3, zone-heavy schemes, with predictable A-gap blitzes, have never won anything — not with Zimmer in Cincinnati, and not in Minnesota either. It’s the perfect scheme if you just want to have a winning record and good stats.

When it comes to defending the best quarterbacks in the league in the biggest games, the scheme doesn’t come close to doing enough to confuse and hold serve. If you’re trying to win a division against Patrick Mahomes and Andy Reid for the next decade, is Guenther’s scheme really the one that’s going to do it?

That’s the definition of a passer-friendly scheme. The Raiders can’t afford for that to continue. And the ease with which Tannehill was able to shred them on Sunday should have been the final straw.

The Zimmer-Guenther scheme works well in the regular season when a defense has a lot of talent, which the Vikings do. That’s why they’re so good. And maybe Gruden and Mayock will get the Raiders there on defense — they’re certainly off to a good start with Maxx Crosby and some other pieces.

But keeping the talent level consistent from year to year is a tough proposition in the NFL. The Raiders’ predicament reminds me of the Packers’ defense in Brett Favre’s final seasons. Bob Sanders, a former Cowboys assistant like Zimmer, ran the same 4-3 scheme, and the Packers nearly went to a Super Bowl in 2008 because of outstanding talent. That lessened the next season, Sanders was fired and Dom Capers, a pressure 3-4 master, was brought in and helped the team win a Super Bowl two years later.

The Raiders should be on the lookout for similar. They need a game-plan defense that is multiple and can morph into different entities.

The Raiders have been undermanned at linebacker and safety, yet Guenther continued Sunday — and for weeks now — to expose Tahir Whitehead, Nicholas Morrow, Erik Harris and D.J. Swearinger in coverage.

The Raiders need upgrades for those players, except perhaps Whitehead, if they expect to compete better defensively.

The Raiders will be a sight to see offensively with another offseason of roster building.

It won’t mean much if the defense doesn’t keep pace.