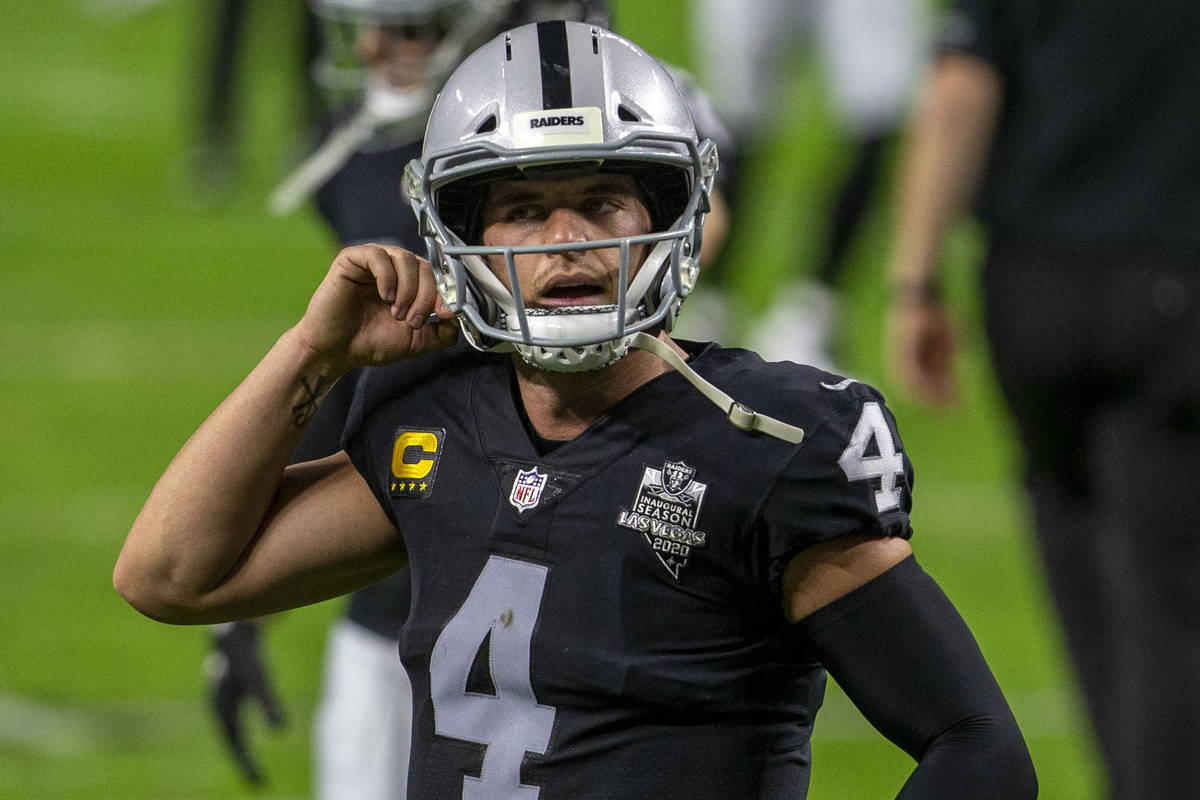 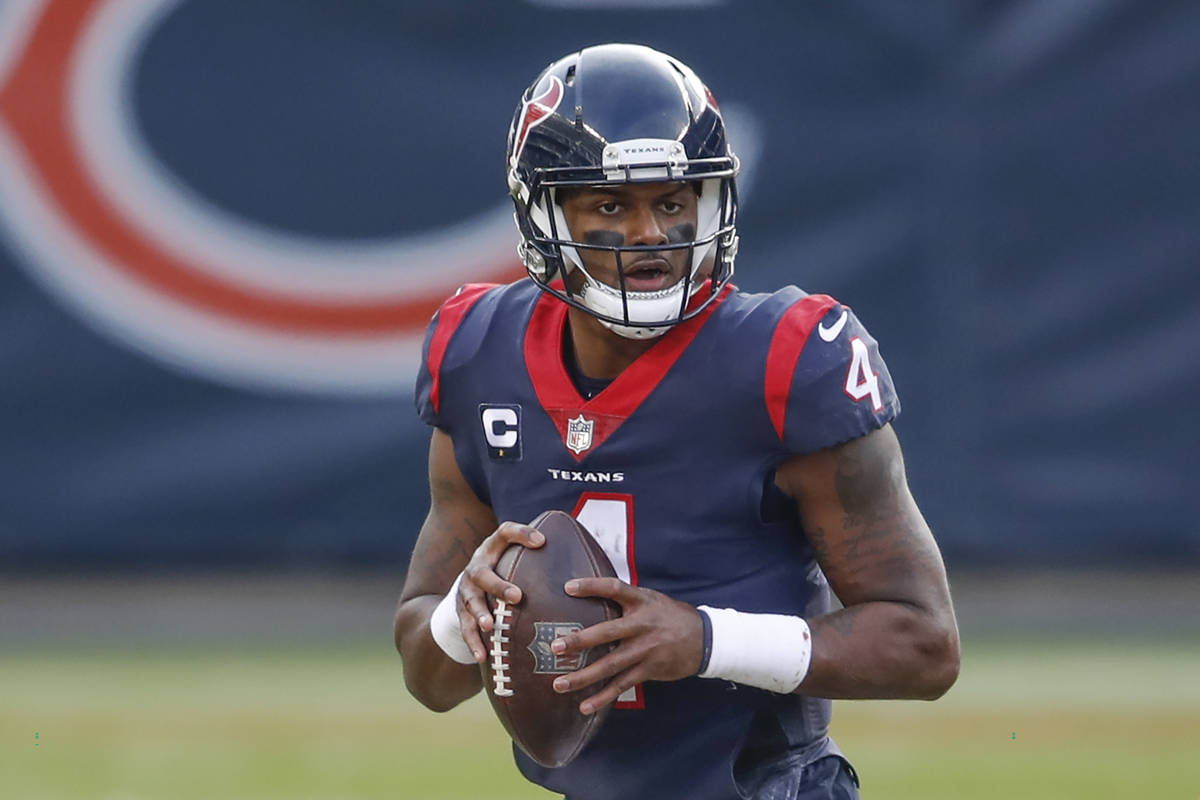 Houston Texans quarterback Deshaun Watson (4) looks to pass the ball during the second half of an NFL football game against the Chicago Bears, Sunday, Dec. 13, 2020, in Chicago. (AP Photo/Kamil Krzaczynski) 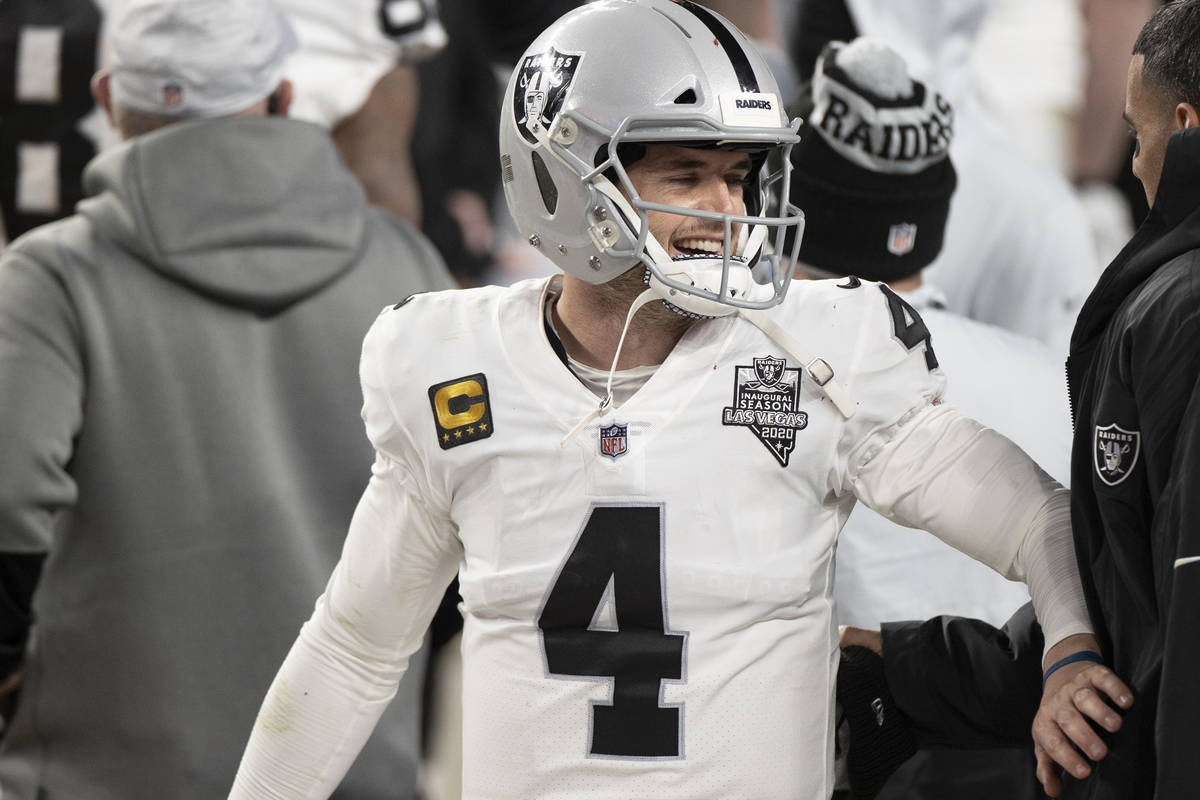 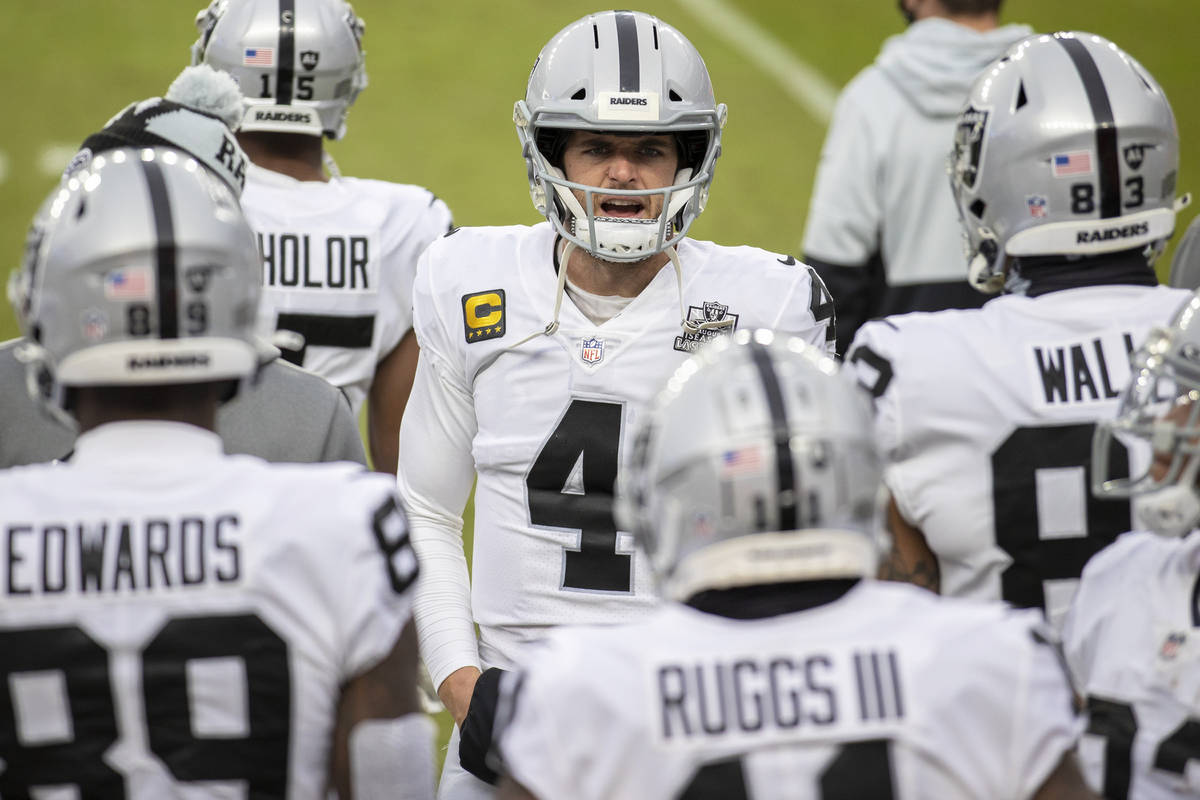 Raiders quarterback Derek Carr (4) fires up his team in the second quarter during an NFL football game against the Denver Broncos on Sunday, Jan. 3, 2021, at Empower Field at Mile High Stadium, in Denver, CO. (Benjamin Hager/Las Vegas Review-Journal) @benjaminhphoto 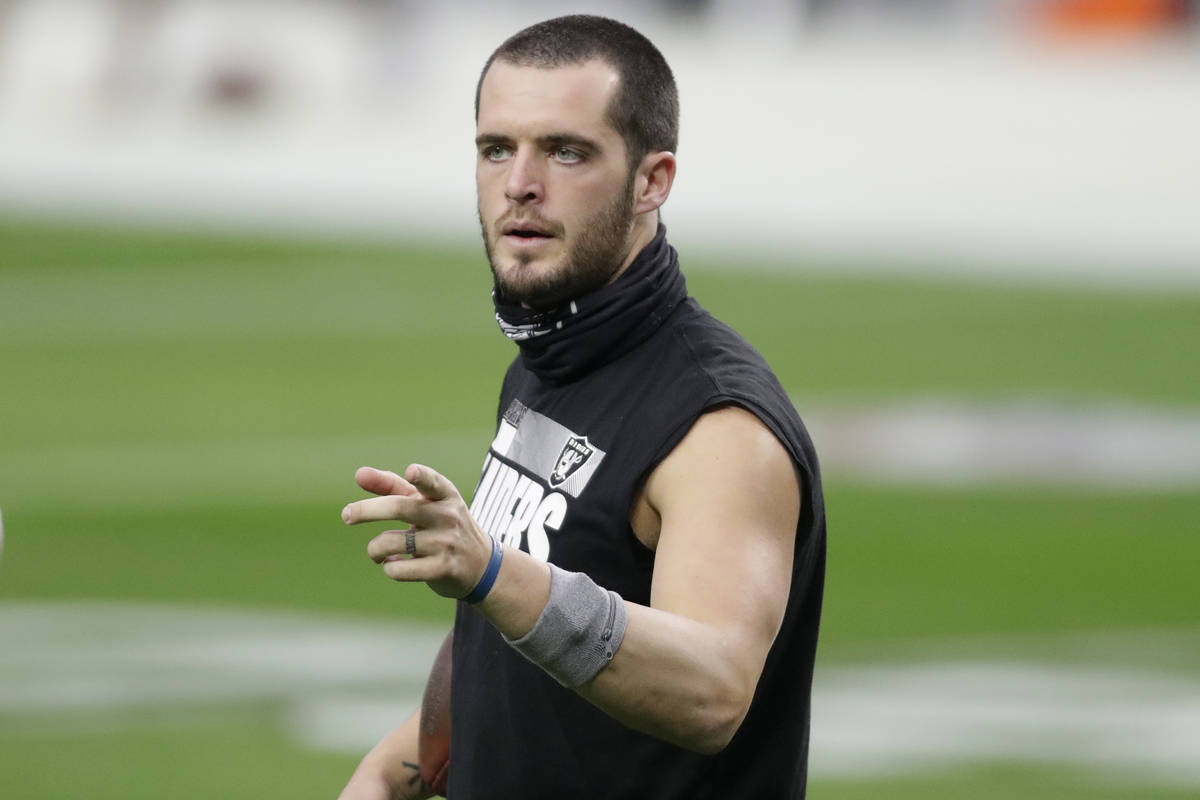 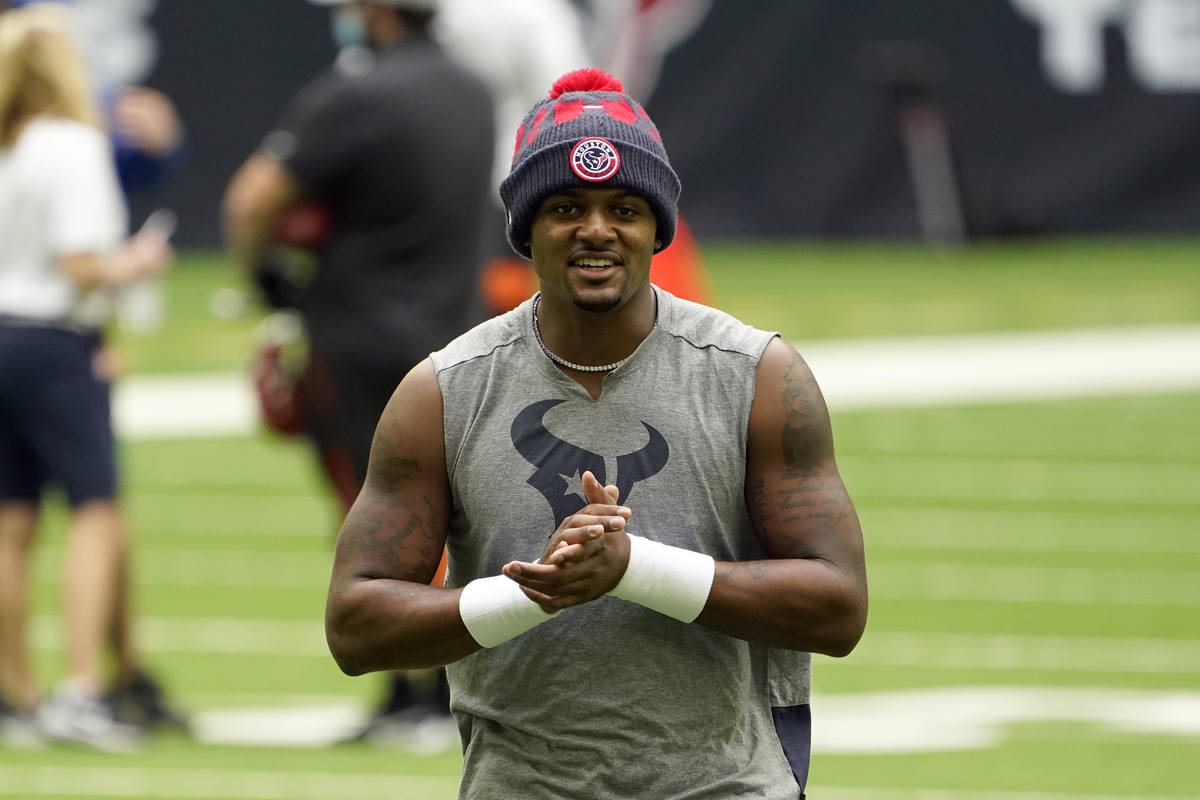 Derek Carr’s outstanding season has made him a sought-after commodity for teams in need of a quarterback and could open the door for the Raiders to pursue Houston Texans quarterback Deshaun Watson.

The Raiders obviously are not tipping their hand about any offseason moves. But several NFL insiders expect the Raiders to field calls from teams inquiring about Carr’s availability.

By every measure, Carr performed like a top-10 NFL quarterback operating a top-10 offense last year. With that position and that side of the ball set, the Raiders can comfortably maintain the status quo and pour the majority of their financial resources and draft capital into improving their defense.

The odds favor them doing just that.

But there is a flip side to the season Carr just produced. Increased demand for his services, insiders say, could create a scenario in which a three-team trade allows the Raiders to acquire Watson.

For that to happen, the Raiders would have to receive two first-round picks for Carr from a team other than the Texans, which they would then package with their own first-rounders in 2021 and 2022 to present a compelling offer of four first-round picks to the Texans for Watson, who has reportedly asked be traded.

“The only way you trade a quarterback the caliber of Carr is by having a replacement plan in place that ensures improvement,” an industry insider said.

Watson, who represents an upgrade from Carr, would set up the Raiders at quarterback for the next decade.

To add Watson, the Raiders will need a number of factors to fall into place, although industry insiders believe a path could emerge.

It begins with the pursuit of Carr by multiple teams.

Among the clubs that could get involved are the Colts, Bears, Patriots and the Washington Football Team. Depending on what happens in New Orleans, the Saints could be potential suitors as well.

“Carr would certainly be a great fit for a number of different teams,” an NFL executive said.

It makes sense that each potential suitor for Carr would first inquire about Watson. But given the hefty price the Rams paid to acquire Lions QB Matthew Stafford — the 26-year-old Jared Goff, a quarterback with multiple playoff wins and a recent Super Bowl appearance, two first-round picks and a third-round selection — the cost for Watson figures to be too great for most.

Carr, who is 29 years old, is a proven NFL QB at a less prohibitive cost. Hence, the expectation that multiple teams will make a pitch for him.

The Raiders, as part of their due diligence, figure to at least listen. As several industry insiders indicated, the market could be ripe for the Raiders to receive a compelling offer from the multiple teams expressing interest.

“It could get to two first-round picks,” one NFL insider said of the return the Raiders could receive for Carr. “He’s not Stafford, but he’s younger and he has a fair contract, so I could see two number ones.”

While that sounds good in theory, it also leaves the Raiders in the position of having to replace Carr should they agree to move him. Marcus Mariota is still on the roster, but it is presumptuous to assume he could come close, let alone duplicate, Carr’s production or the command he has of Jon Gruden’s offense.

Armed with additional draft picks, the Raiders could move up in next April’s draft to select one of the promising quarterback prospects. But that begs the question of why Gruden would take the chance on an unproven youngster after devoting so much time in developing Carr?

Which brings us back to the 25-year-old Watson, who fulfills the requirement of providing an upgrade to Carr.

Odds are, the Raiders happily hold on to Carr and get to work on building a playoff-caliber defense.

But the chance to go from very good to great doesn’t come around very often. And if things break right, the Raiders could be in position to do just that.