NFR 2021 Round One Highlights 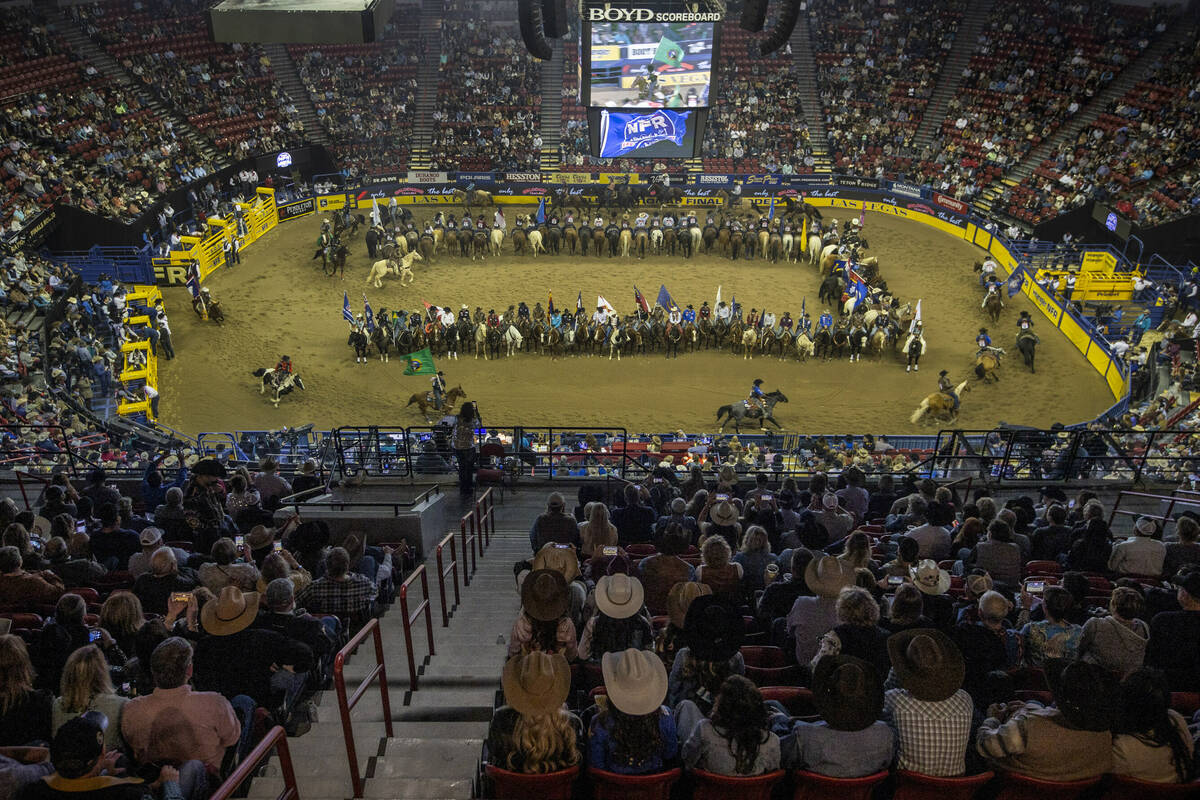 Competitors gather in the arena as the fans applaud at the start of the opening night of Wrangler National Finals Rodeo at the Thomas & Mack Center on Tuesday, Dec. 2, 2021, in Las Vegas. (L.E. Baskow/Las Vegas Review-Journal) @Left_Eye_Images 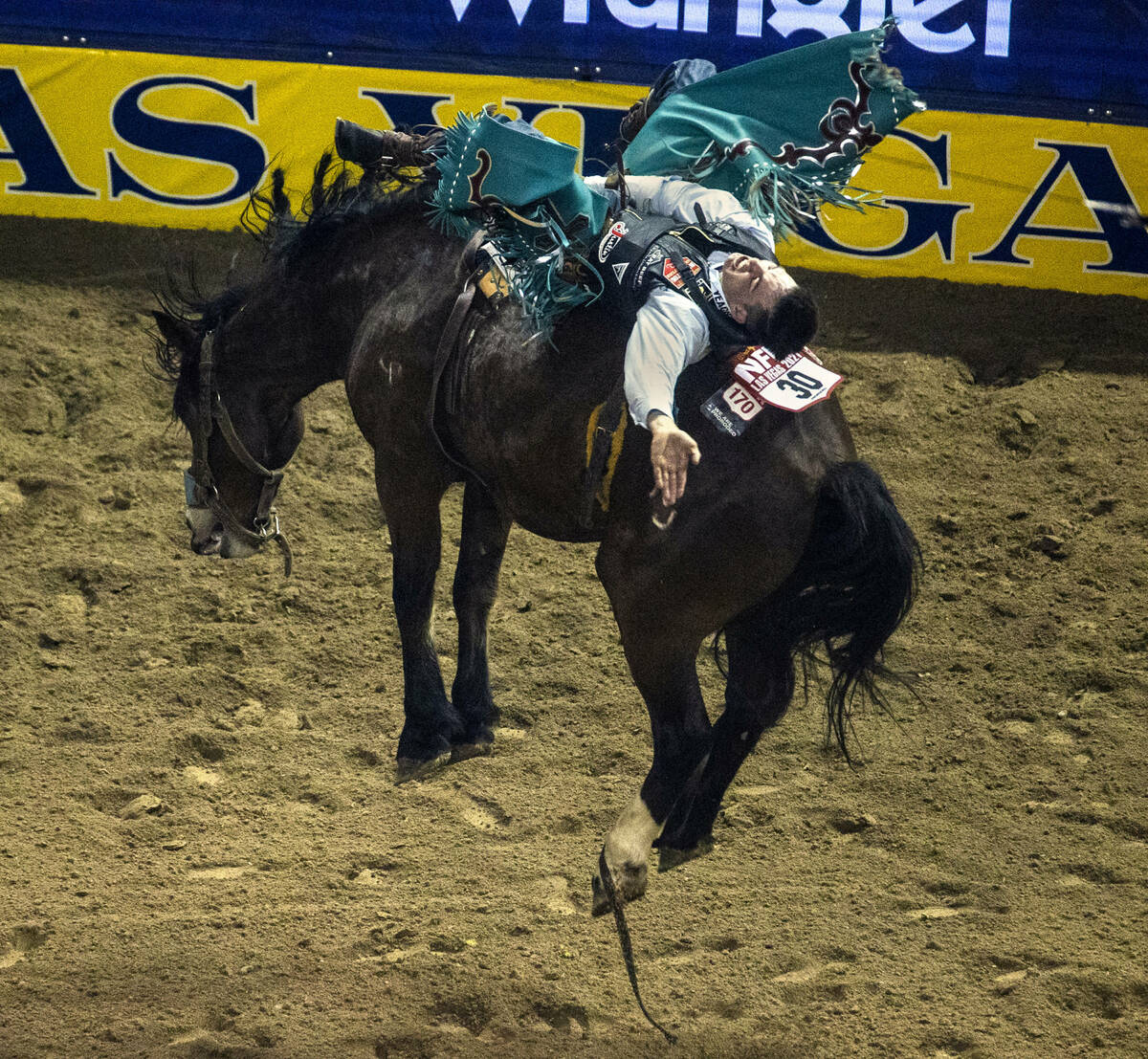 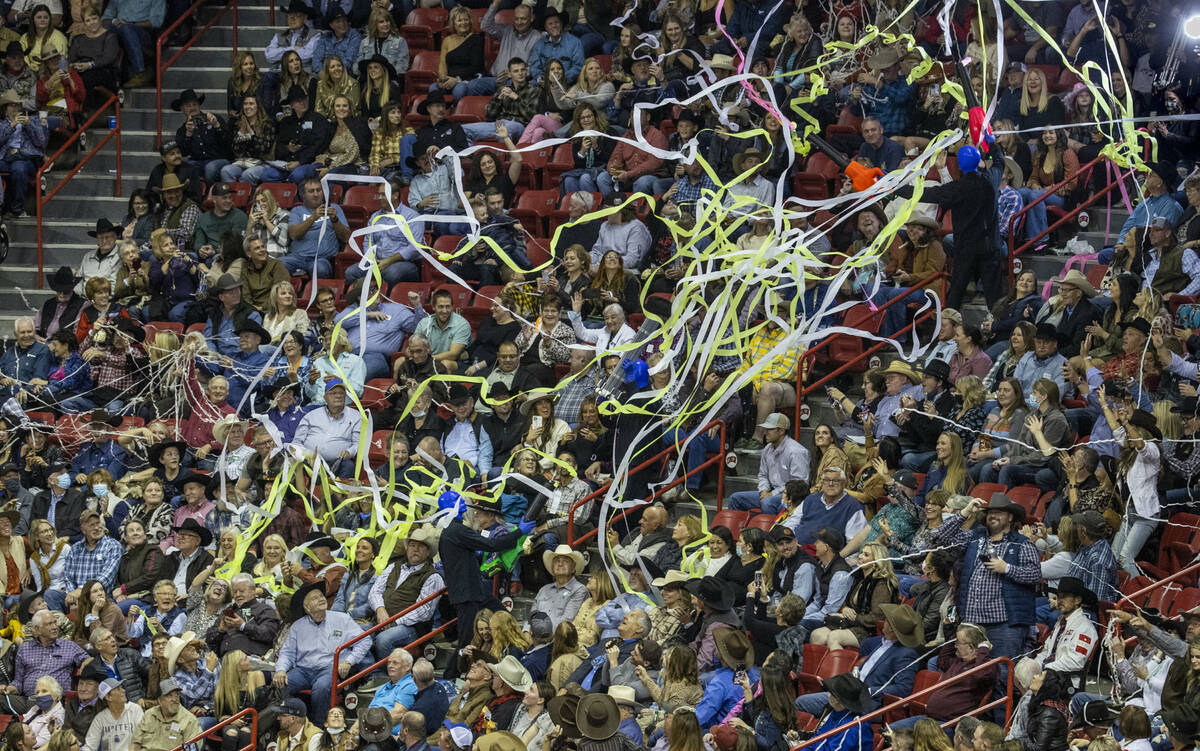 Fans are showered with confetti by the Blue Man Group during the opening night of Wrangler National Finals Rodeo at the Thomas & Mack Center on Tuesday, Dec. 2, 2021, in Las Vegas. (L.E. Baskow/Las Vegas Review-Journal) @Left_Eye_Images 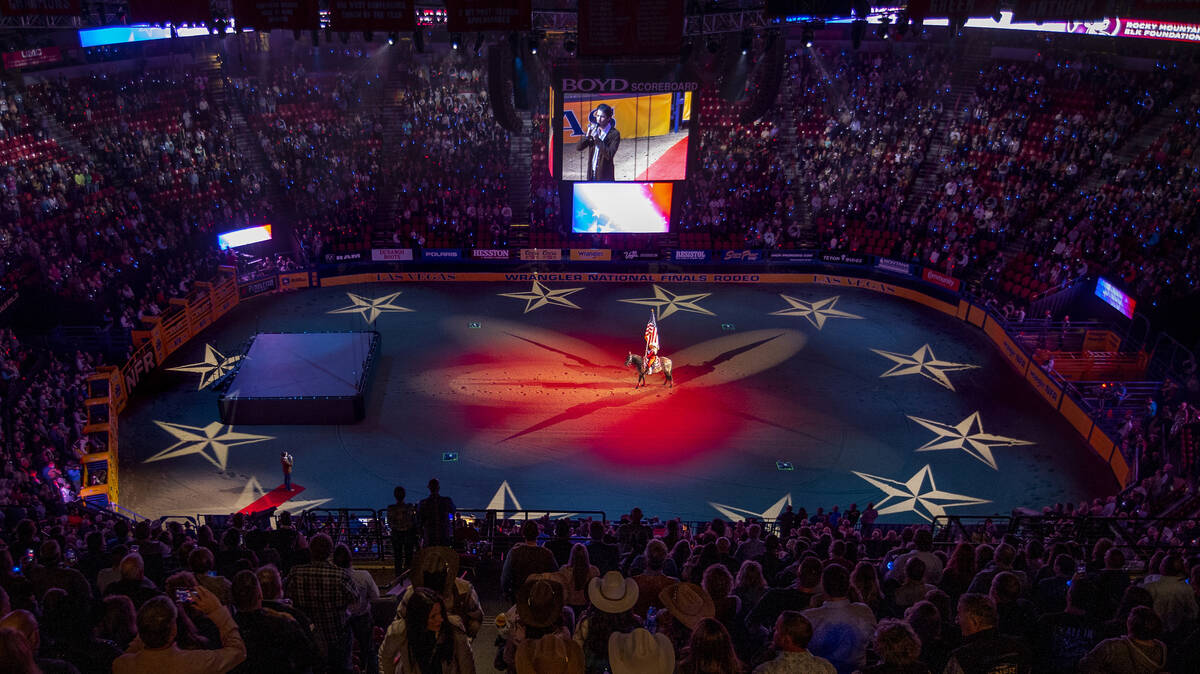 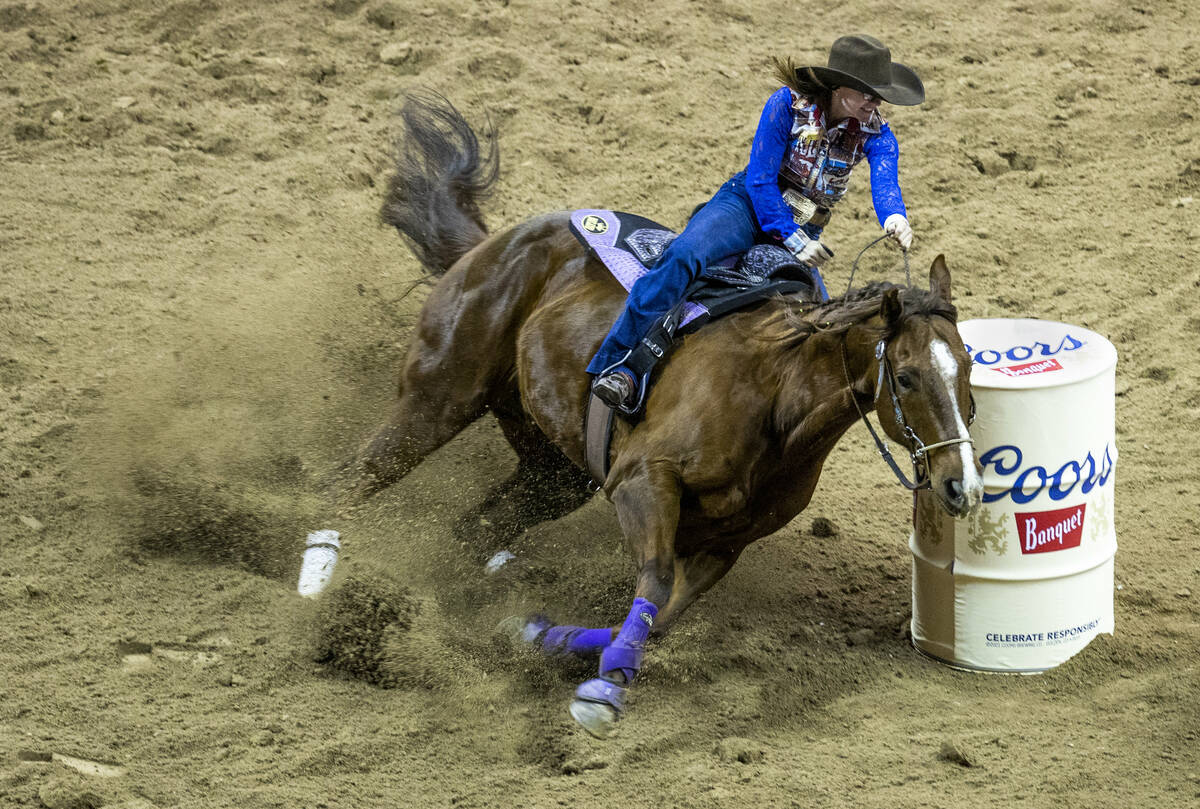 With only one of 10 rounds complete, there’s still a ton of riding and roping to be done at the Thomas &Mack Center before world champions are crowned at the National Finals Rodeo.

That’s what makes the early go-rounds of the NFR as crucial as the last few.

With significant paydays on the line for each performance and a veritable pot of gold available to those who ride the best and rope the fastest over the 10-day long haul, the standings heading into the NFR usually do not resemble the ones heading out.

“That’s exactly what I planned on when I left the house, to do that right there. Now I’m excited for the next nine days.”

Unlike in American team sports, pro rodeo champions are decided by the amount of money earned during the season.

The winners of each performance receive $26,996 from the record competition purse of $12.2 million, with the pacesetters in average scores and times at the end of the 10 days pocketing $69,234 each — meaning the championship leaders in the seven disciplines often flip-flop from week to week and even night to night.

It happened Thursday when Ryder Wright finished fourth in saddle bronc and two-time all-around champion Stetson Wright failed to place, enabling Ryder Wright to move past his kid brother atop the world standings.

In that way, the rodeo finals can be comparable to the NFL, when a wild-card team catches fire in the playoffs, or the NCAA basketball tournament, when lower seeds get hot and make a bracket-busting run.

But whereas a 16-seed has defeated a 1-seed only once in the NCAA men’s tourney, charges by lower-ranked cowboys on the NFR money list are much more common.

Two have bolted all the way from the 15th and final qualifying spot to win the world championship belt buckle.

In 1990, Hall of Fame team roper Allen Bach became the first NFR qualifier to move from last to first in Las Vegas. Ten years later, bull rider Cody Hancock duplicated the feat by parlaying wins in the first two go-rounds and another in the seventh to vault from 15th to the world championship.

Conversely, a bad week at the NFR also can turn what seemed an insurmountable championship lead into a razor-thin one.

During the 2020 NFR, tie-down roper Shad Mayfield began the 10-round chase with an $89,479 advantage before placing in only two of the 10 rounds. The young New Mexico cowboy needed almost every dollar of that cushion. He wound up holding off runner-up Marty Yates by $231.

At the end of the 10 days, Pope said the NFR is just another rodeo that pays well. But you could tell from his smile that 90.5 points and $26,996 the first time out of the chutes in Las Vegas will take a lot of weight off a cowboy’s shoulder.

“It builds your confidence a lot and makes a guy feel good,” Pope said. “The windshield’s a lot bigger than the rearview mirror, and I’m here to look out the windshield.” 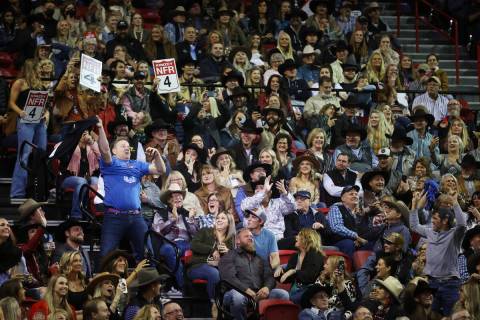 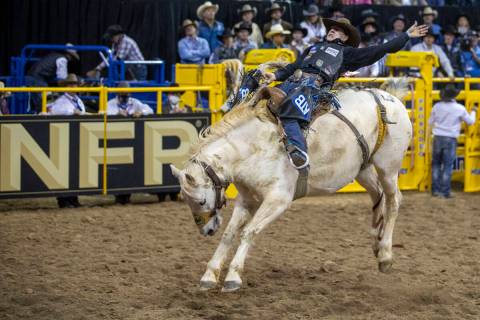 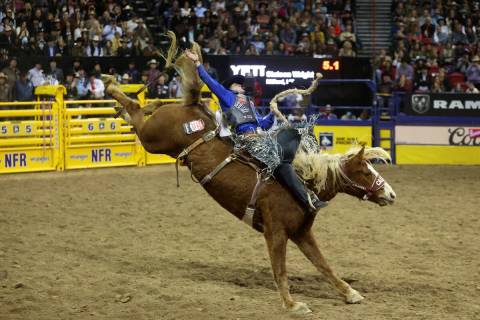 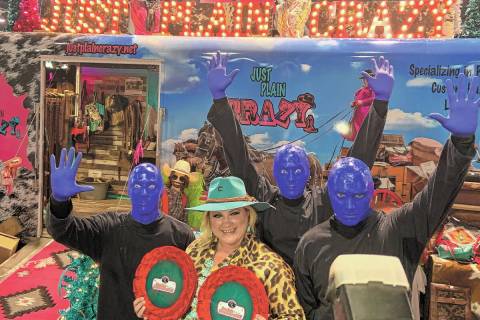 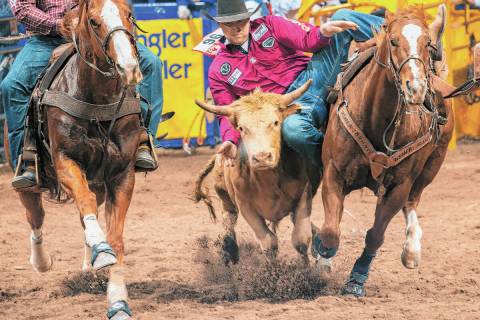