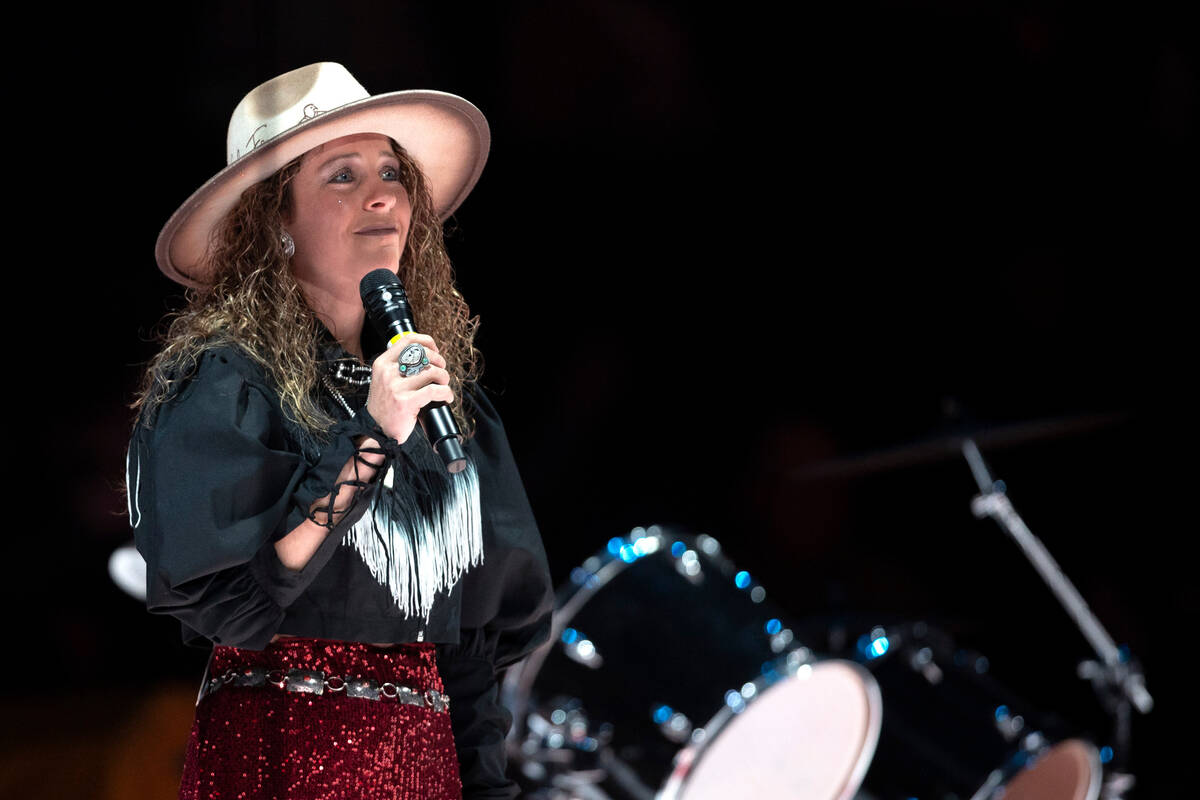 Candace Muir accepts applause after singing the National Anthem during the eighth go-round of the National Finals Rodeo at the Thomas & Mack Center on Thursday, Dec. 8, 2022, in Las Vegas. Muir won the fan contest to sing the anthem last year before suffering life-threatening injuries in an accident. (Ellen Schmidt/Las Vegas Review-Journal) @ellenschmidttt

Many roads are traveled by the cowboys and cowgirls who compete in the National Finals Rodeo.

But none were darker than the one Candace Muir traversed to belatedly sing the national anthem before Thursday’s Round 8 at the Thomas &Mack Center.

The Ohio farm girl was supposed to perform the honor during last year’s NFR after winning a fan contest. But on Nov. 7, 2021 — three weeks before the NFR — she suffered life-threatening injuries in a rollover automobile accident on a county road between Lima, in northeast Ohio, and her home in Waynesville, 11 miles to the southeast, after attending a livestock show.

She thinks she swerved to avoid hitting a deer. At least that’s what she told the farmer who called for the ambulance after her sister’s SUV smashed into his barn, tilling fields and tearing up crops, before she lapsed into a coma.

When the former powerlifter woke up three days later in a Toledo hospital, her dream of singing the anthem at the NFR was in pieces. So were all the bones supporting her spinal column that are necessary to walk.

“I was pretty much told I was never going to walk again,” Muir, 32, said about shattering her pelvis. “They put me back together, and now I’m full of titanium.”

She still walks with a limp, and with all that metal holding her together, she’s susceptible to cold snaps when one arrives with an early frost.

But the life-changing crash didn’t damage her spirit. Nor, judging from the multiple ovations she received after paying homage to the Stars and Stripes, her singing voice.

“I’m doing pretty good now, considering it’s only been a year,” Muir said about being placed in a stabilizing fixator and then a wheelchair before beginning to walk again in May.

Some of the nerves required for other tasks and pastimes once taken for granted — such as grooming a cow — have yet to regenerate.

When she sang the anthem Thursday — “That’s the way it’s supposed to be done right there,” the rodeo announcer told the sold-out crowd — it was the first time since the accident the singer was able to pull on cowboy boots.

She thought the chances of her singing the anthem at the NFR had died in that farmer’s field before receiving a surprise phone call from Amber Held at Las Vegas Events.

“I wasn’t planning on doing it, but Amber said I should try,” she said.

Muir recorded another audition tape and advanced through the rounds of judging to earn her spot.

Muir graduated from Ohio State with a Bachelor of Science in zoology and a minor in music. She plays percussion instruments and was a member of the Ohio State University a cappella group. But she has yet to witness a football game at Ohio Stadium, because there always seemed to be a 4-H show or chores to do on Saturday.

“The only time I was in that stadium was when I graduated, which is pretty sad,” Muir said.

Ohio Stadium often is referred to as “The Horseshoe,” owing to its U-shaped configuration. The horseshoe also is symbol of good luck. It doesn’t hurt to have a little when navigating dark and lonely roads to perform on rodeo’s biggest stage.

At The National Finals Rodeo, to put it in a way the folks back home at Ohio State can relate.