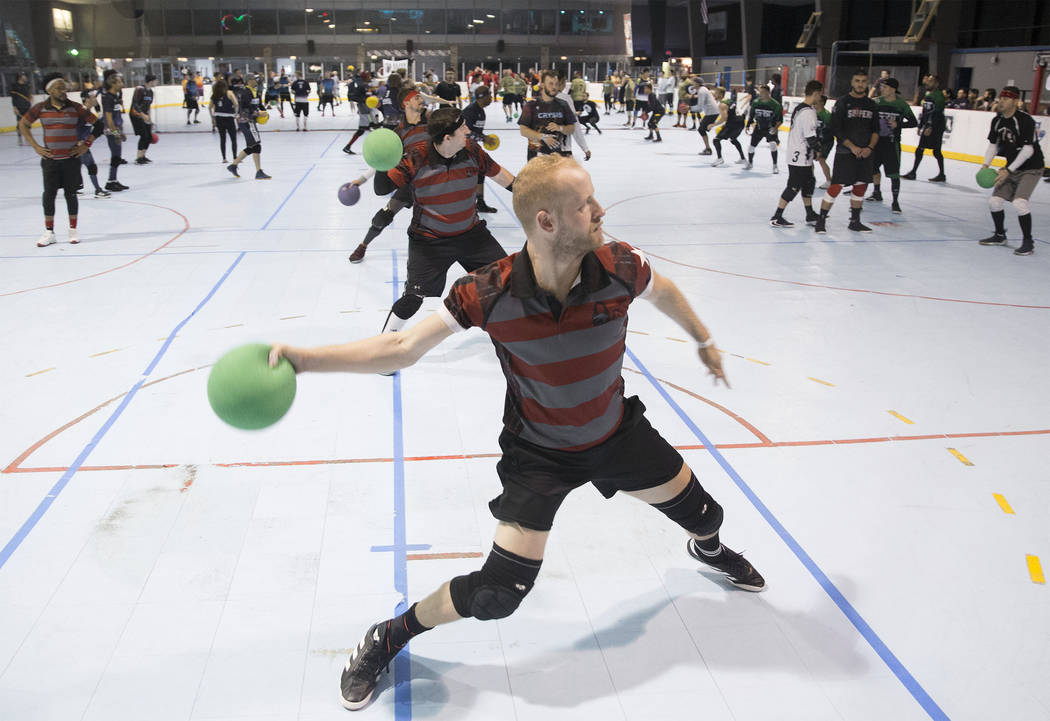 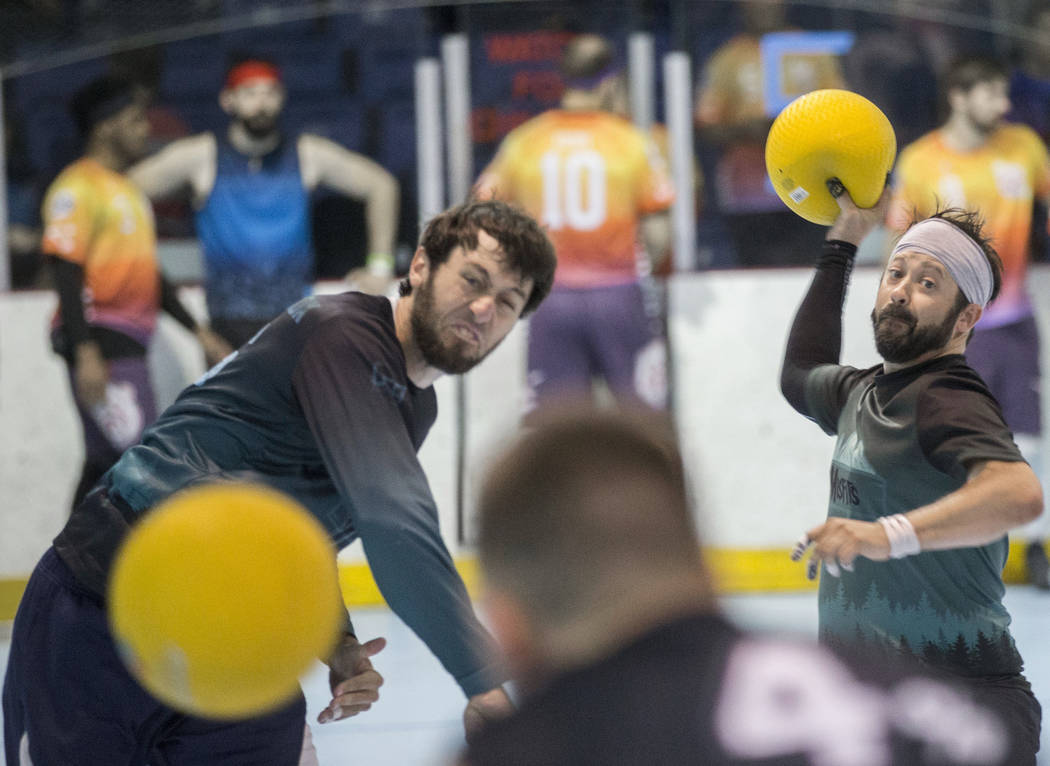 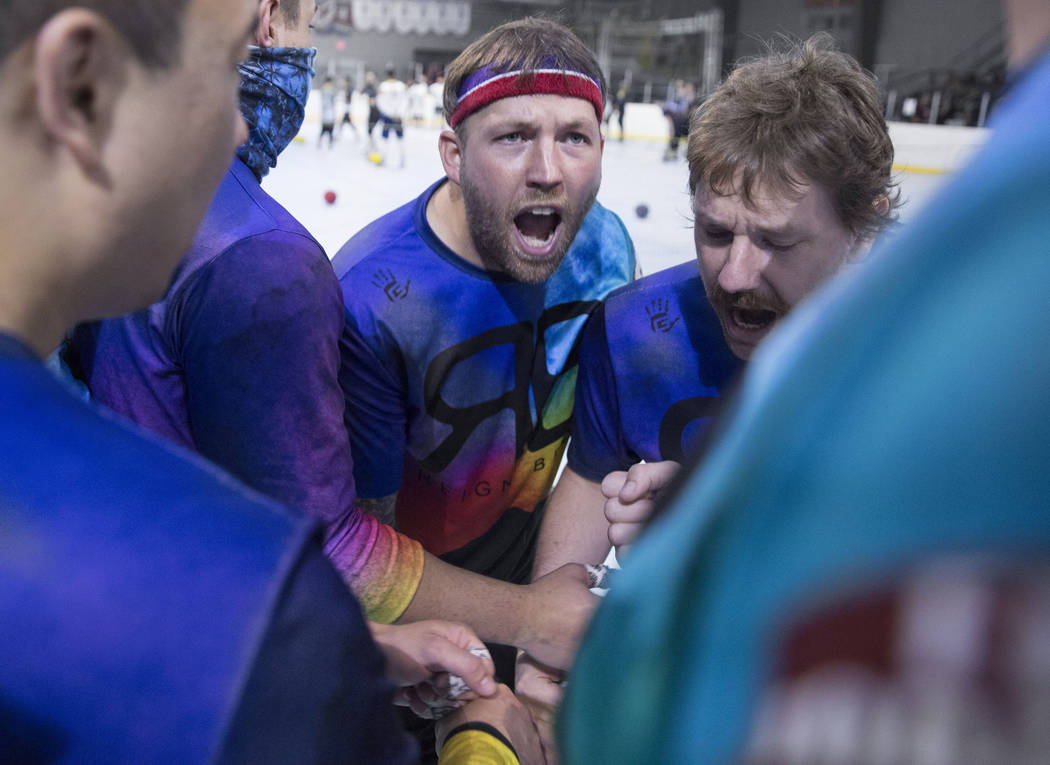 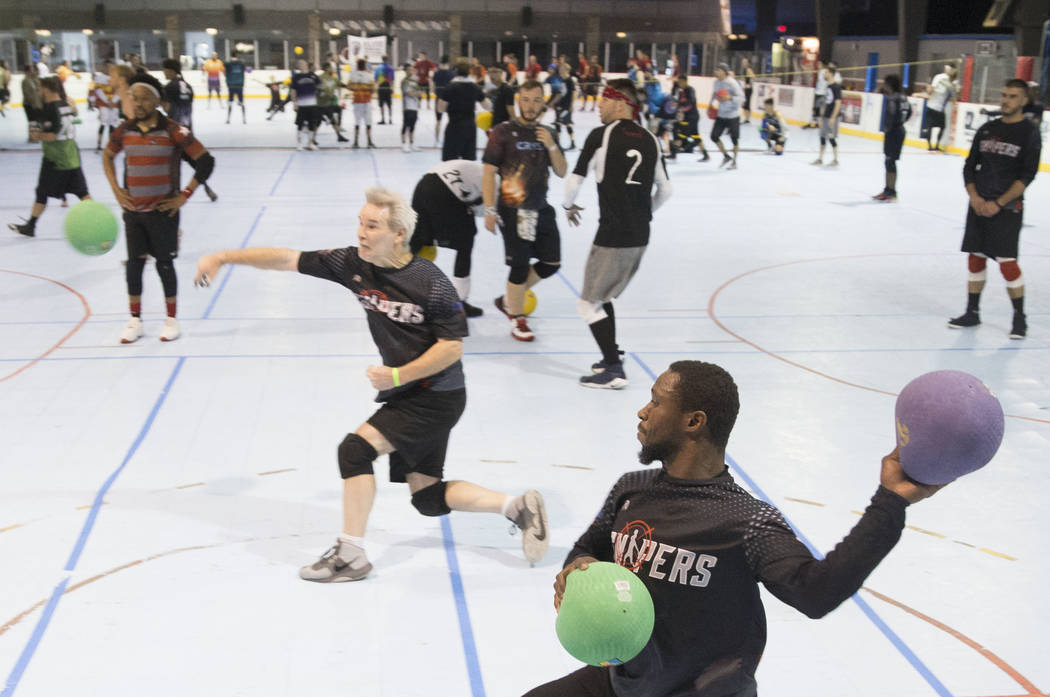 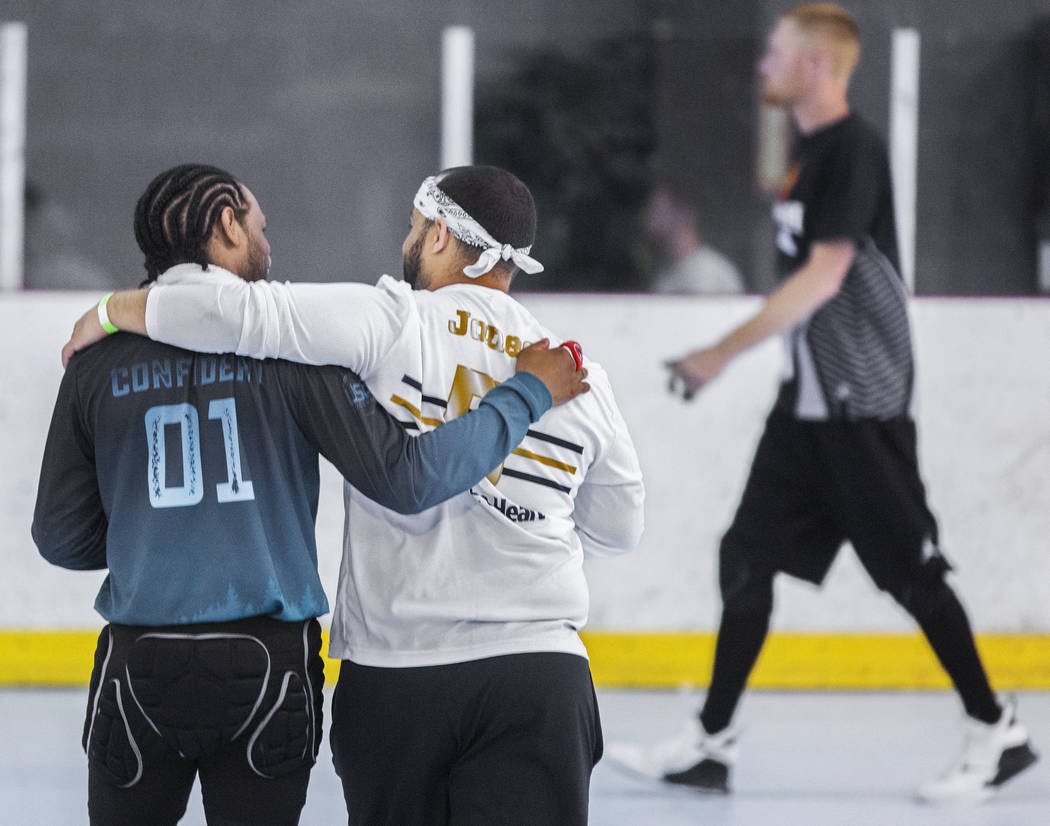 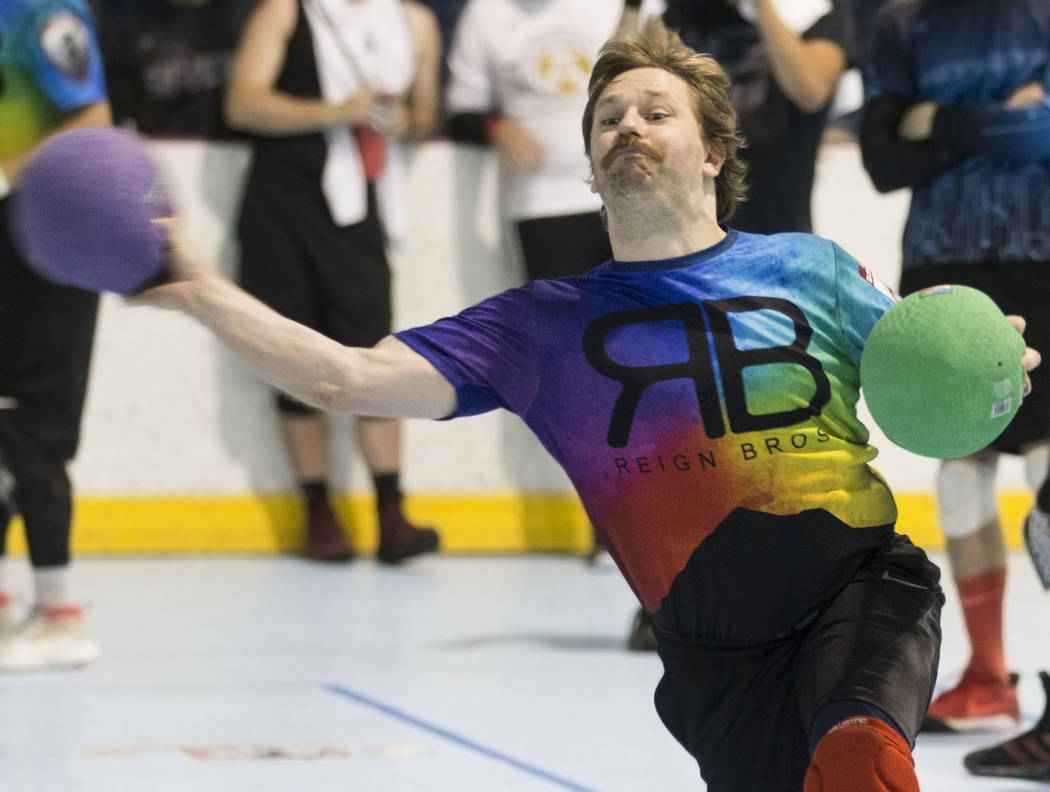 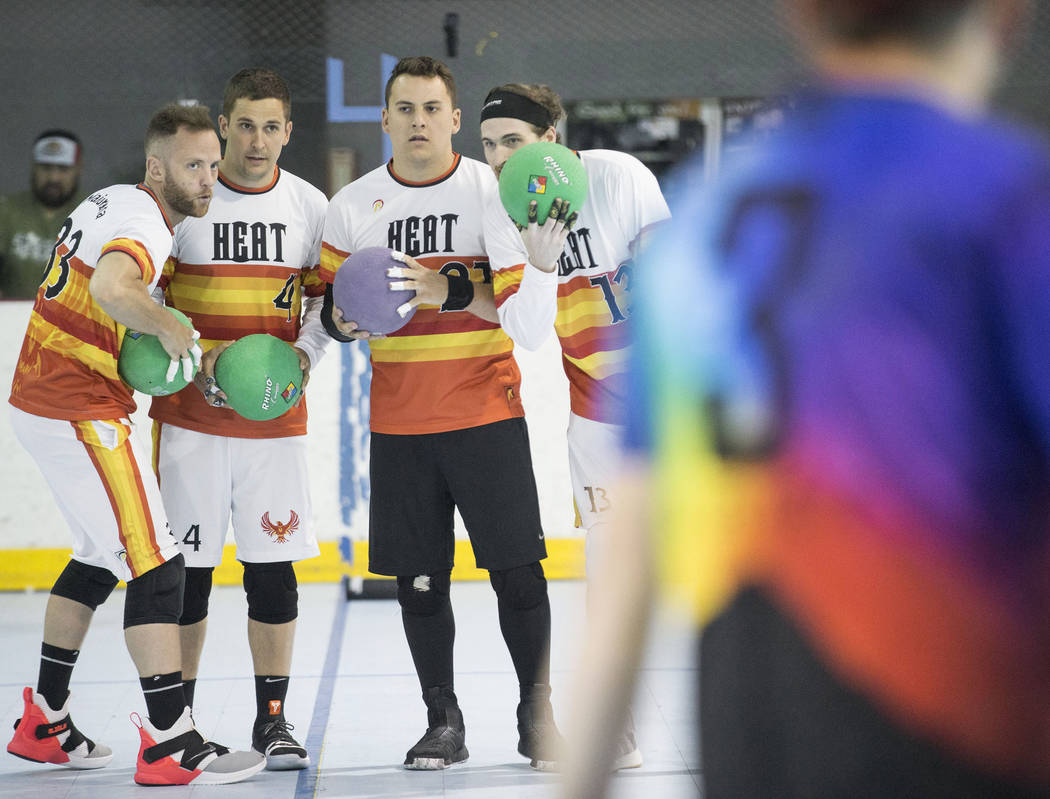 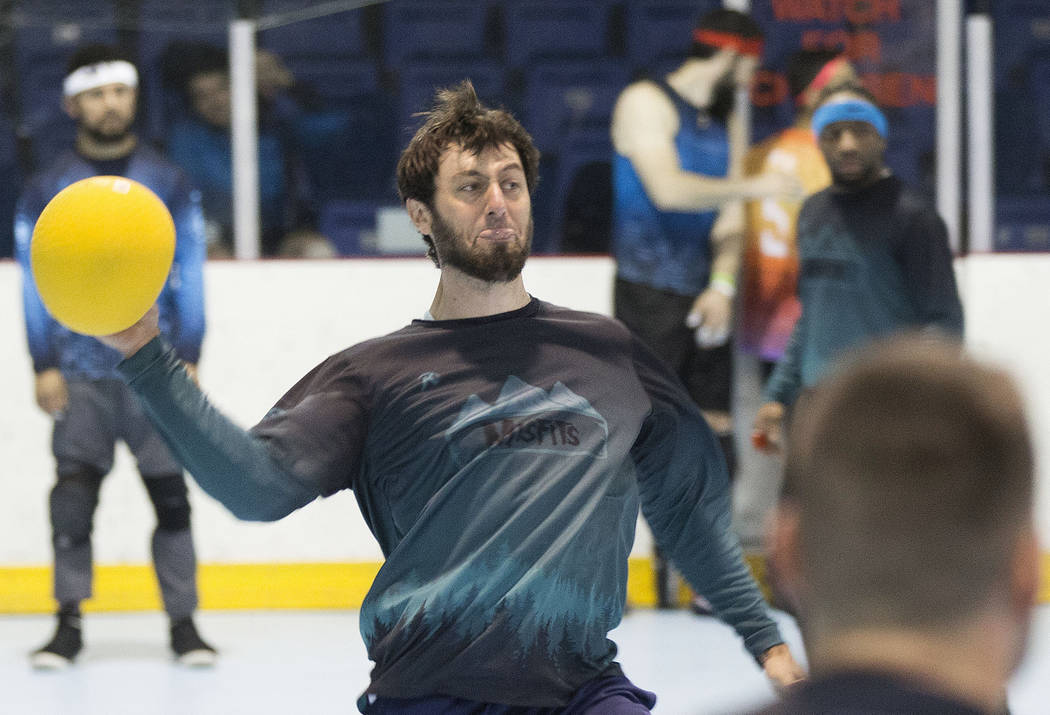 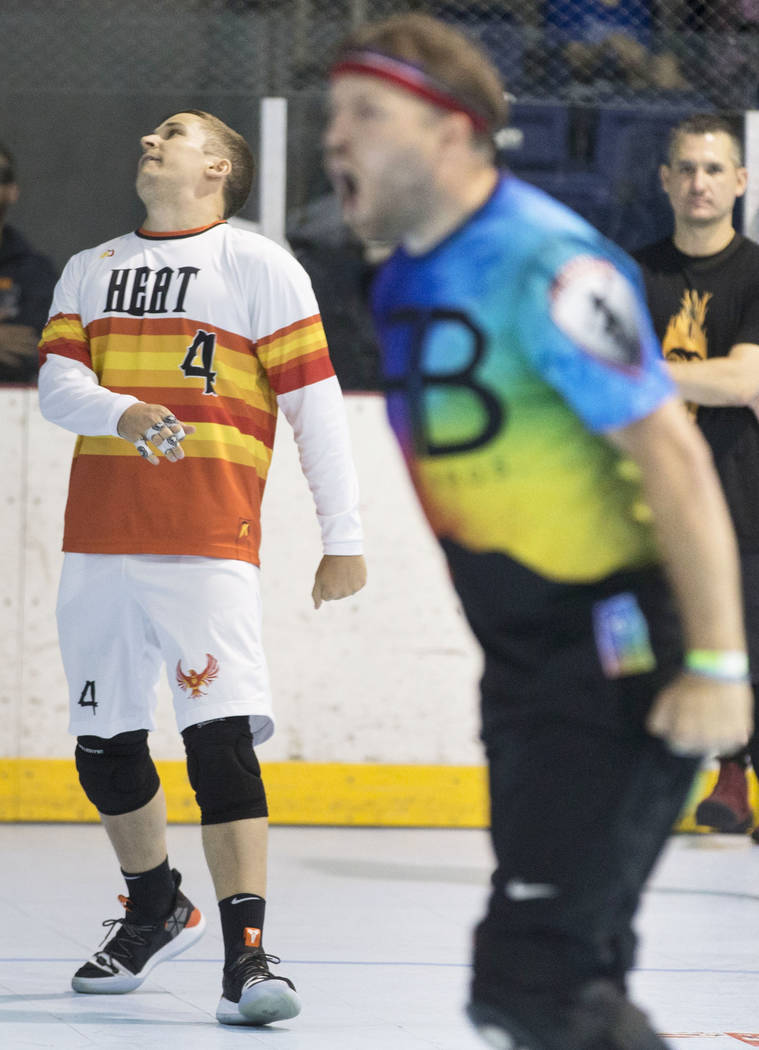 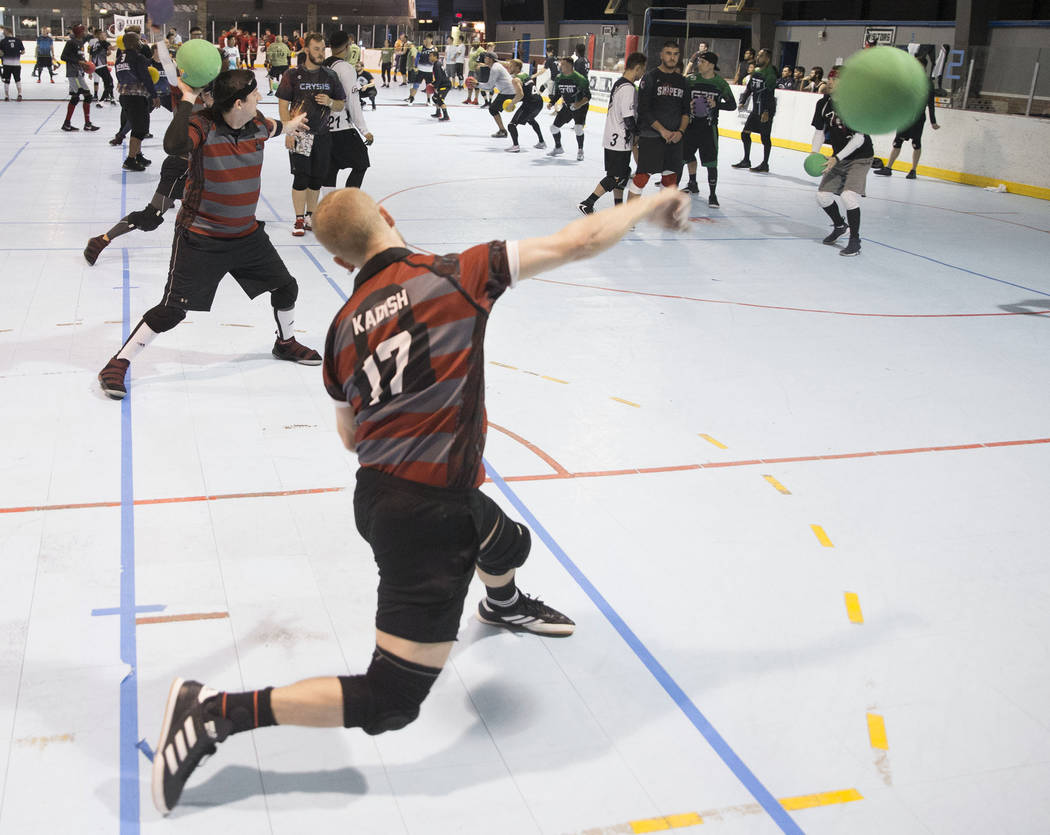 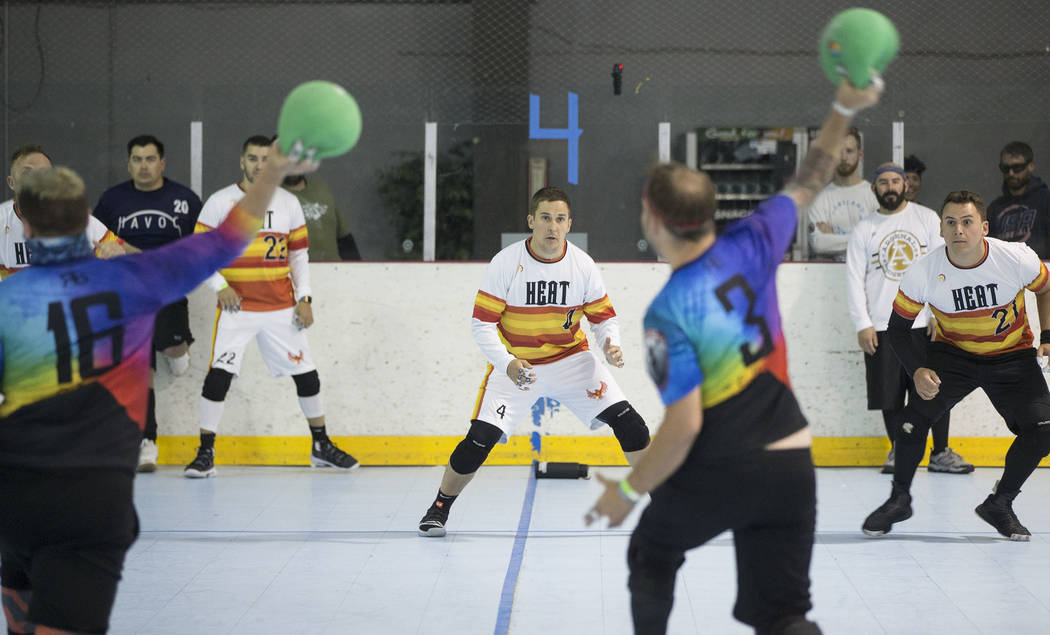 The Reign Bros go on the attack against the Heat, facing, during a two-day, five-division dodgeball tournament on Saturday, July 13, 2019, in Las Vegas. (Benjamin Hager/Las Vegas Review-Journal) @benjaminhphoto 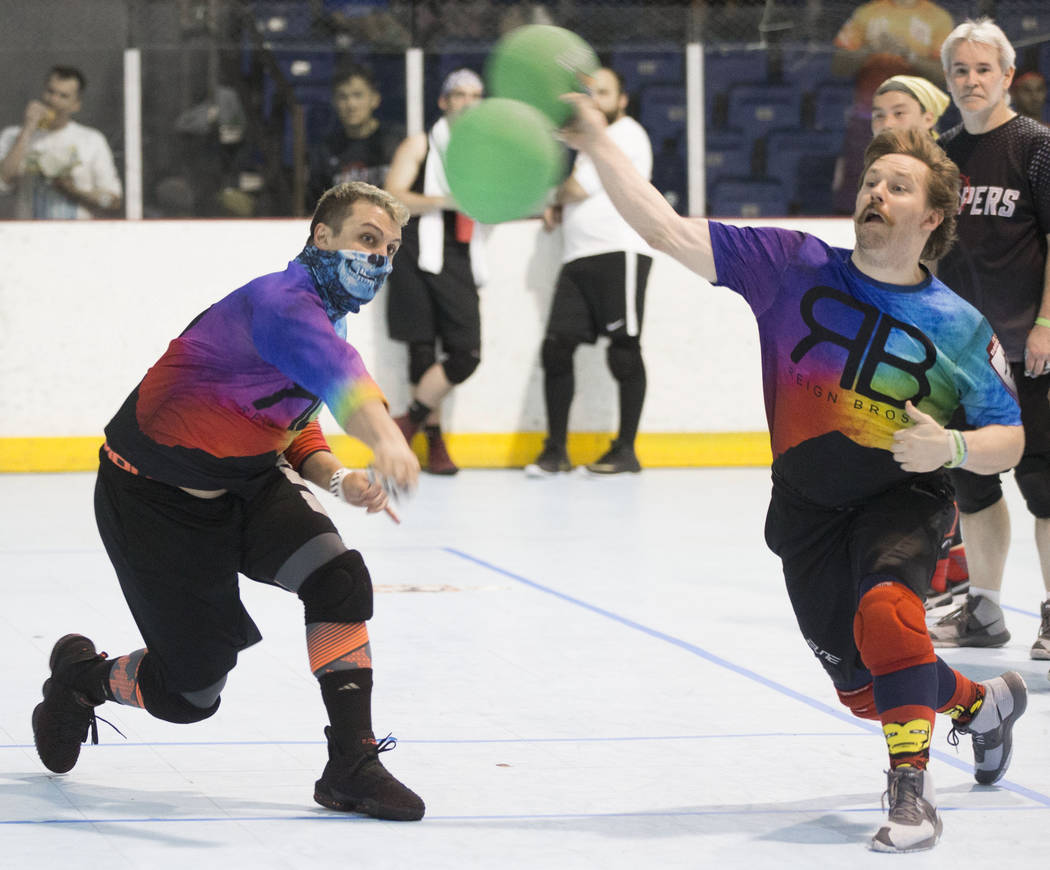 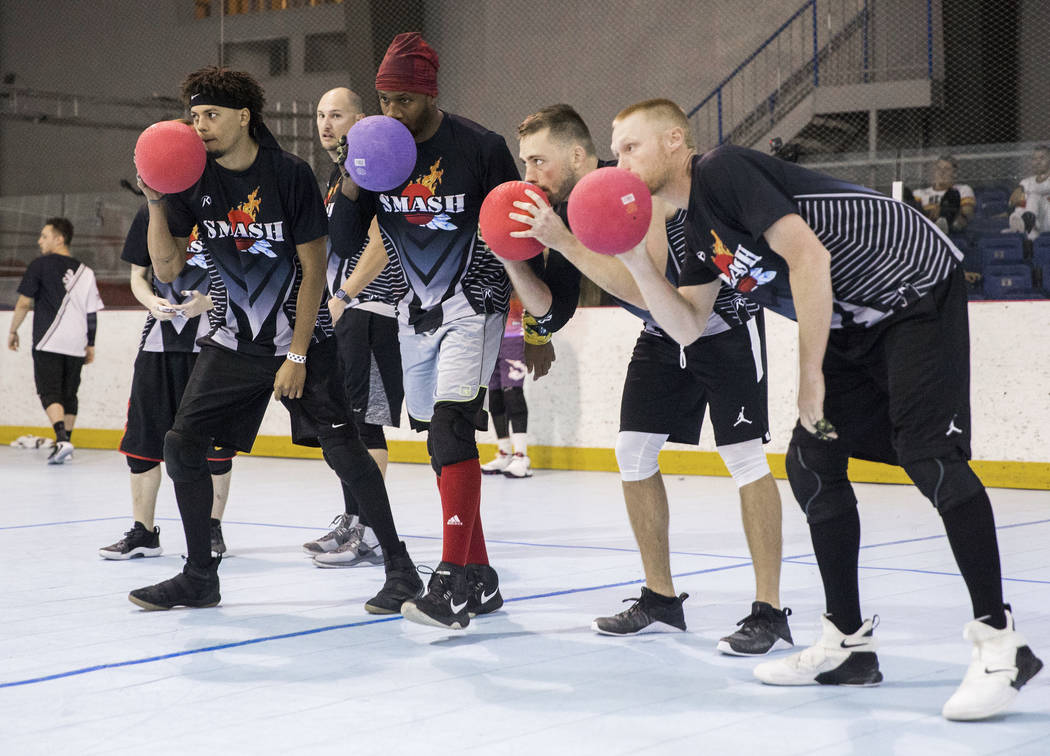 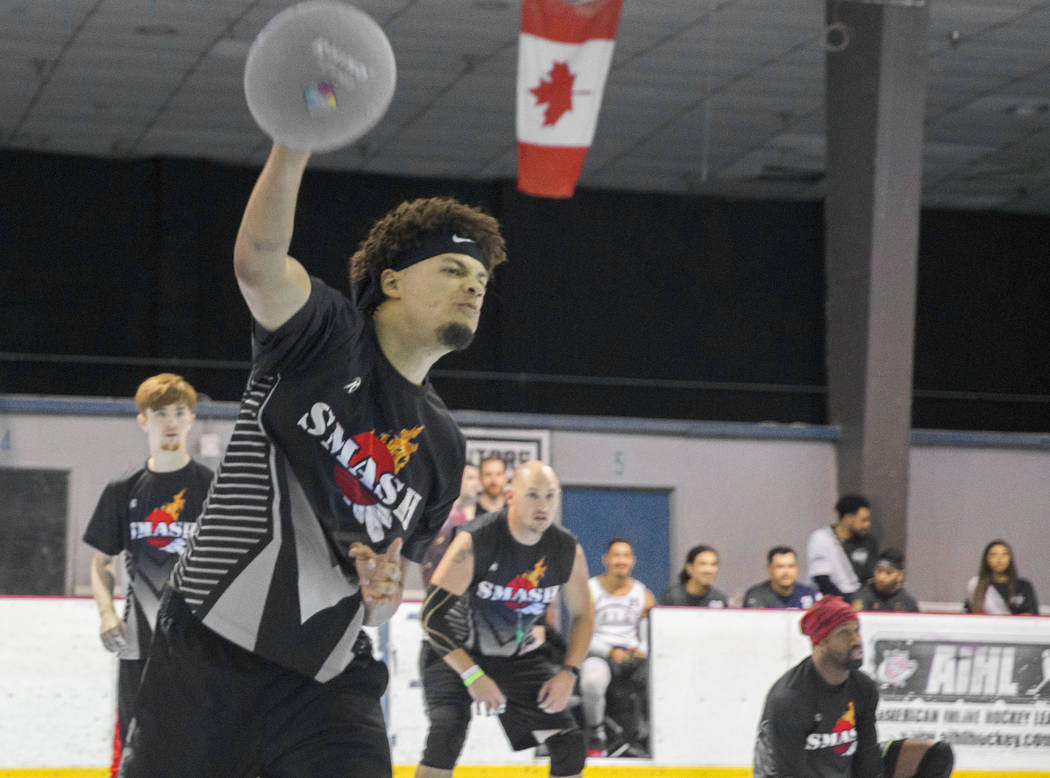 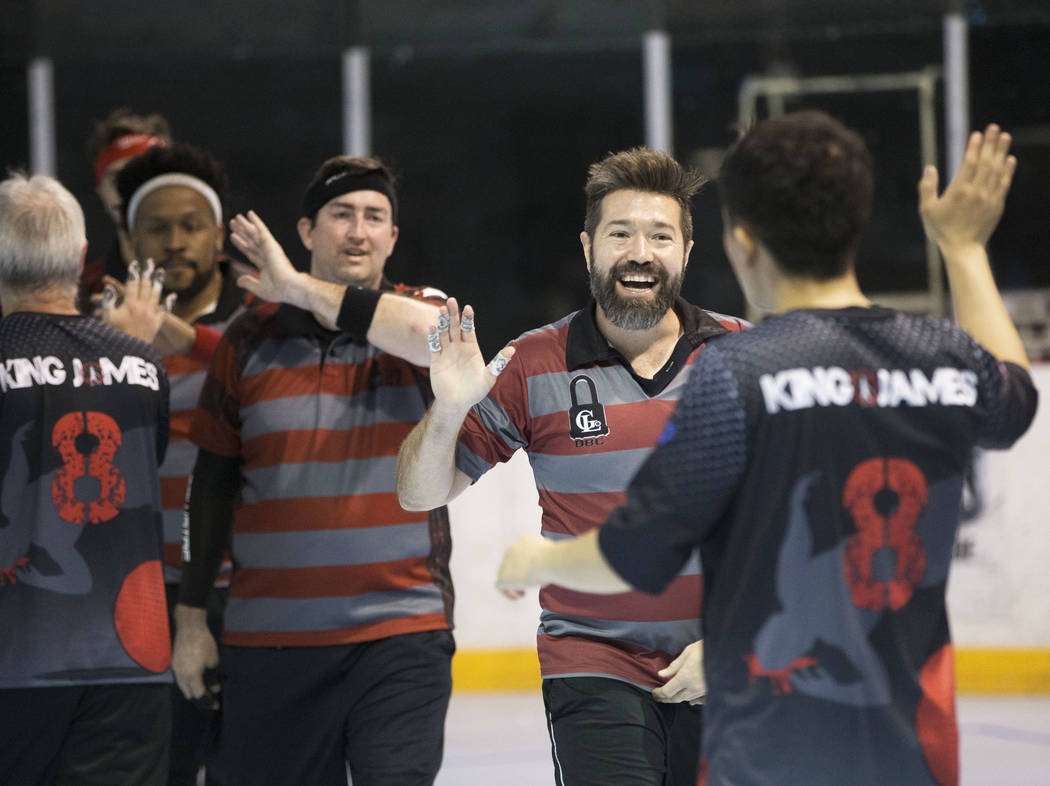 These were the immortal words of venerable coach Patches O’Houlihan in “DodgeBall: A True Underdog Story.” It had been only days since the death of Rip Torn, who played Patches in the 2004 comedy, and nobody associated with the Elite Dodgeball West Round 3 tournament at the Sahara Event Center was able to dodge a question about the impact the movie had on the ancient pastime.

“They would Google it, and more people would come in. The influx gave us the power to organize and grow the sport. The league I started in, there were about 60 people in it. (After the movie) there were about 120, 140. Right now I run a league in West Hollywood (California) that has 600 people who play every week.”

There are 22 men’s and 15 women’s teams competing at multiple Las Vegas venues this weekend. In keeping with the movie theme, Mason said they are largely comprised of Average Joes with a sprinkling of Globo Gym types.

Dodgeball is played by two teams, with the object being to eliminate players from the other side by hitting them with a thrown ball. Based on what was witnessed Saturday, there were far more fastballs thrown than change-ups.

“What’s it like to get hit in the face?” I asked a member of a team calling itself the Anarchists.

“I dunno,” interrupted a teammate, nodding to an opponent who had been hit squarely in the kisser. “Go ask that girl over there. I was the one who hit her.”

RIP Rip Torn. Patches O'Houlihan will forever be one of the funniest movie characters of all time pic.twitter.com/LAsEpBoUYZ

After hosting the AMA Supercross championship at sold-out Sam Boyd Stadium for the past 23 years, Las Vegas will move up a week on next year’s schedule. Sam Boyd will host the whoop-de-do specialists in the penultimate race April 25 with the season finale moving to the “fan-friendly state of Utah” (according to the news release). Rice-Eccles Stadium in Salt Lake City will host the championship round May 3.

Rice-Eccles’ seating capacity is 45,000. Sam Boyd can accommodate only around 30,000 for Supercross, making it one of the series’ smallest venues. The Supercross riders generally compete in NFL stadiums and MLB ballparks.

“Our goal is the continued growth of the sport and rotating markets every couple of years,” Supercross executive Michael Ferraza said via text message. “Moving the finale to a new location helps keep the series fresh for the fans (and) race teams and riders.”

Ellenton, Fla., (July 9, 2019) – The 17-round schedule for the 2020 season of Monster Energy AMA Supercross, an FIM World Championship, will return to some of the sport's most iconic stadiums while also rotating fan-fav… pic.twitter.com/qjmtKp8zK7

People who bought advance tickets complained when NBA superstar-in-waiting Zion Williamson suffered a hangnail (actually a minor knee injury) and, like other top draft choices, was held out of subsequent games after making a sensational Vegas Summer League debut.

But this has become something of a common practice with extracurricular events such as Summer League hoops. It isn’t much different than star players sitting out meaningless college bowl games or guys bailing on the baseball All-Star Game because they need a rest/would rather go fishing.

“The Summer League is there for teams to use as appropriate,” NBA commissioner Adam Silver said in discussing the no-shows and cameos. “Frankly, at the end of the day, the real intention of the Summer League was for nondrafted players to get exposure. So while it’s fun to have (top draft picks) out on the floor, remember we only have a two-round draft. So this is critically important exposure for a lot of (nondrafted players).”

Translation: As Charlie Baron, a former tournament director of Las Vegas’ PGA Tour stop used to say when media complained about the lack of marquee names on the entry list: “I’ve got news for ya: Ben Hogan isn’t playing, either.”

Zion Williamson will not participate in the remainder of the NBA Summer League, the Pelicans announced today.

He left last night’s game against the Knicks with a bruised left knee. pic.twitter.com/kXgeQzw7jD

“When the air is thick with desperation, when the blood lust starts to achieve criticality, it’s only going to be so long. Ticking time bomb that only accelerates until they wreck.”

When the air is thick with desperation, when the bloodlust starts to achieve criticality it's only going to be so long. Ticking time bomb that only accelerates until they wreck.