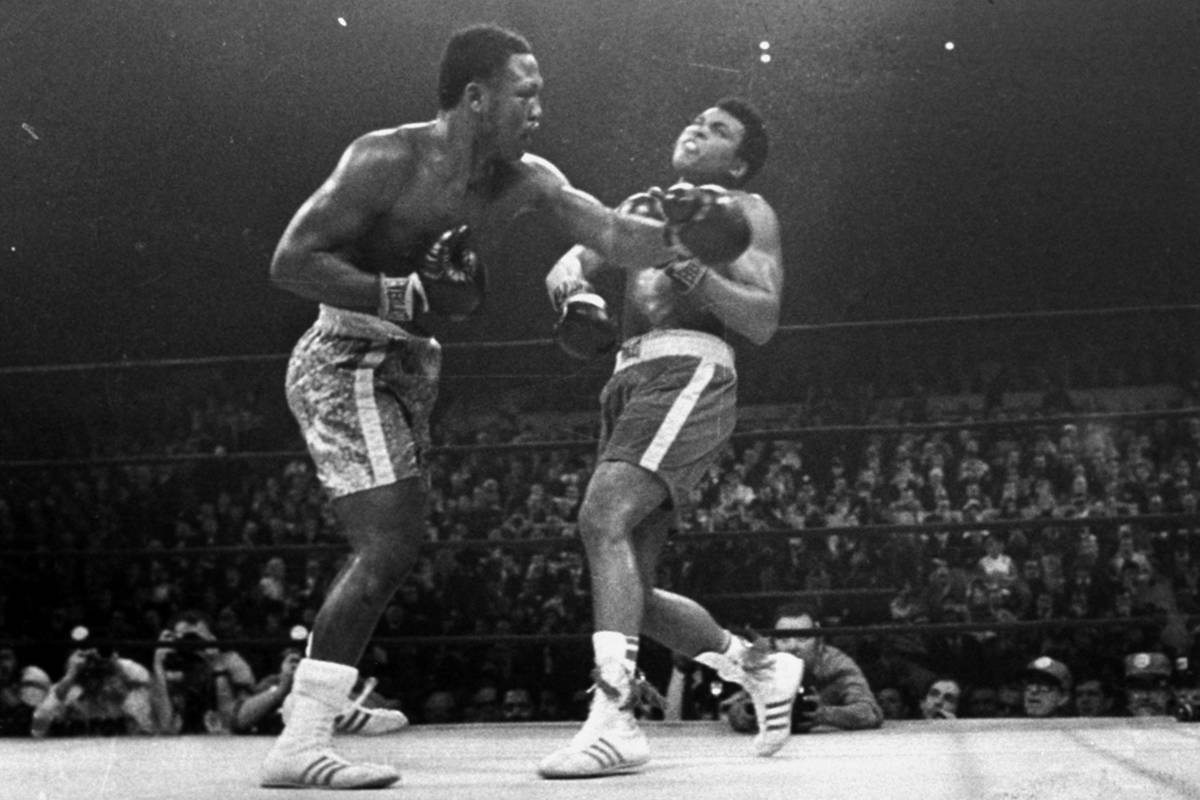 Joe Frazier hits Muhammad Ali with a left during the 15th round of their heavyweight title fight at New York's Madison Square Garden, in this March 8, 1971, file photo. (AP Photo/File)

Monday will mark the 50th anniversary of the “Fight of the Century,” Ali-Frazier I, at Madison Square Garden ■  a fight so hyped and anticipated that Frank Sinatra offered to take pictures for Life magazine just so he could see it.

But as great as the fighters were, it wasn’t really about them, said Hall of Fame sports writer and Henderson resident Jerry Izenberg, who covered the seminal bout for the Newark (New Jersey) Star-Ledger. It wasn’t even about boxing.

It was about America and a conflict in Southeast Asia that was dividing it.

“Everybody took a side,” recalled Izenberg Thursday of that electric evening,

If you were for the Vietnam War, you were in Frazier’s corner. If you were anti-war, you sided with Ali. Dads on one side. Sons on the other. (At least in my house.)

Autographs were signed, pictures were taken. Then one of the tykes told Smokin’ Joe the only reason he won was because Ali had been drugged.

“Frazier turned to me and said “What the hell do I have to do to get out of this guy’s shadow? ’” Izenberg recalled.

■  Where were you when sports shut down? My last interview before social distance went into effect one year ago was with Pace Mannion, the former Chaparral High and Utah star who played in the NBA for six seasons.

Mannion is the father of former Arizona ace Nico Mannion. I’ll not soon forget him asking after Arizona had beaten Washington at T-Mobile Arena about the possibility of the Pac-12 tournament continuing amid the growing threat of the virus, and if parents would be allowed to watch.

By the next morning, nobody was allowed inside the building as March Madness had turned to sadness.

■  The passing of former NFL defensive back Irv Cross on Feb. 28 rekindled fond memories for his longtime CBS colleague Brent Musburger, who wrote on Twitter that Cross, whom he first met when both were students at Northwestern, was one of the finest gentlemen he’d ever met.

Cross was from Hammond, Indiana — the same town in which I was born. His brother, Ray, was a bird-dog basketball scout who sent players who were an inch too short or a step too slow for Don Haskins at Texas-El Paso to my uncle, who coached at an NAIA school in the Southwest.

Over the years, Irv Cross’ brother sent so many good players out West that the court at Western New Mexico University now has my uncle’s name on it.

On the death of Irv Cross . . . pic.twitter.com/ntx3KcKyz7

■  Bryce Harper and fellow Las Vegan and former Phillies’ first-round draft choice Bryson Stott have become spring training roommates in Clearwater, Florida, where the latter was asked if they dined on filet mignon, given the former’s $330 million contract: “No,” Stott said laughing, “but he’s a great host.” … Two more Las Vegas products — Joey Gallo of the Rangers and Tommy Pham of the Padres — made MLB.com’s list of potential comeback hitters of 2021. Gallo’s slugging percentage dipped to .378 last season, and Pham batted .211 in 31 games . … In an announcement about coaching hires, UNLV football coach Marcus Arroyo said one “was familiar with our high standards and expectations” — which seemed a bit audacious, given the Rebels went winless in his first season and have posted just four winning years in the past 34.

But every now and then when someone in sports makes a dubious comment, they get called on it. Here’s what Super 70s Sports said on Twitter when the Jets stated they might entertain inquiries about quarterback Sam Darnold:

“I love the Jets being “open” to Sam Darnold offers. In unrelated news, I’m also open to someone paying me to haul off the lawnmower in my garage that doesn’t work.”

I love the Jets being “open” to Sam Darnold offers. In unrelated news, I’m also open to someone paying me to haul off the lawnmower in my garage that doesn’t work.