Danny Tarkanian’s book, “Rebel with a Cause,” was 15 years in the making and originally many pages longer.

The memories of the fights his dad, Jerry, had with the NCAA and the UNLV administration as the Rebels’ legendary basketball coach brought up old, bitter feelings in Danny, and those were reflected in the book’s early draft.

But then Tarkanian’s son decided to tell the story — from Tark’s Armenian roots to his Naismith Basketball Hall of Fame induction in 2013 — with most sections on the NCAA and former UNLV president Bob Maxson limited to facts through documents, newspaper stories and personal experiences.

“I think readers in Las Vegas will be very surprised,” Danny Tarkanian said. “I don’t really go after Maxson or the administration. I do point out how the NCAA had completely mistreated my father and so forth, but it was more from their own notes and documentation.”

Danny Tarkanian said he wanted to clear up what he said were misconceptions regarding how Tark built UNLV into a major force, culminating with the 1990 national championship.

The book is highly critical of the NCAA’s enforcement procedures, singling out former executive director Walter Byers and former longtime executive David Berst. Danny Tarkanian wrote that both men had a vendetta against his father, who angered the NCAA by writing articles critical of the organization when he coached Long Beach State in the late 1960s and early 1970s. Tark also didn’t back down when the NCAA investigated his program at UNLV.

He was vindicated in 1998 when the NCAA agreed to a $2.5 million settlement.

Danny Tarkanian said he wanted to show his dad didn’t offer large sums of money to entice recruits — unlike some of the nation’s powers, he noted — and that there was no basis for an academic fraud charge Tark was accused of committing.

Most of the book focuses on Tark’s coaching jobs at Long Beach State, UNLV and Fresno State. Rebels fans can relive the experiences of the four Final Four trips.

Tark, who died five years ago at the age of 84, left a legacy that has been difficult for succeeding UNLV coaches to match. The court at the Thomas & Mack Center is named for him, and he has a statue outside the arena.

He went 784-202 over 31 seasons at the three schools, including 509-105 over 19 years at UNLV. It was early in his tenure at UNLV that Tark, forced by a smaller roster, changed his style from a slow-paced offense and zone defense to the full-court game that helped make the Runnin’ Rebels famous.

“Their defense is very good,” Danny Tarkanian said. “They’re playing very hard. UNLV teams under my father played extremely hard. I see some of those similarities with T.J.’s team.” 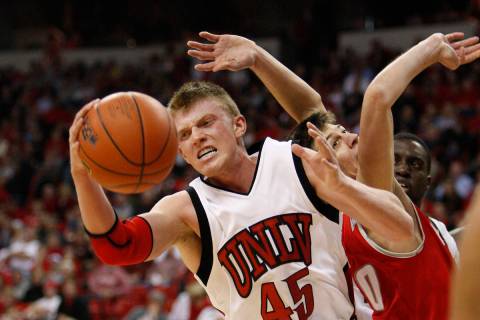