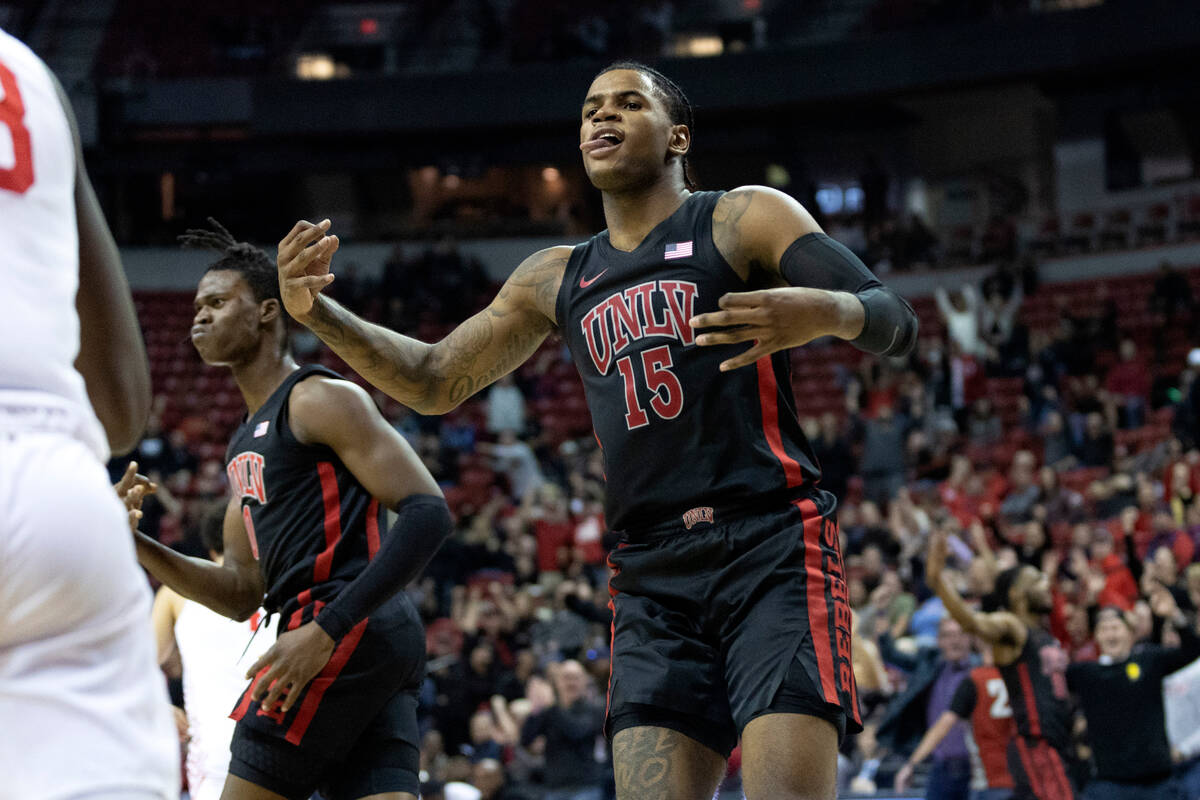 UNLV Rebels guard Luis Rodriguez (15) and forward Victor Iwuakor (0) celebrate after their team scored a three-pointer during the second half of an NCAA college basketball game against the Dayton Flyers at the Thomas & Mack Center on Tuesday, Nov. 15, 2022, in Las Vegas. (Ellen Schmidt/Las Vegas Review-Journal) @ellenschmidttt

UNLV was trailing by two points after San Diego forward Jaiden Delaire threw down a dunk with 11:29 remaining in the first half Saturday.

By the time Toreros sophomore Wayne McKinney III scored San Diego’s next basket, almost three minutes had passed and the Rebels were leading by nine points. When San Diego scored its next points, UNLV was leading by 15.

The Rebels moved to 8-0 with a 95-78 victory over the Toreros at Jenny Craig Pavilion in San Diego, using a 21-4 run in the span of about 5½ minutes to take control. The Toreros never got the lead back.

Four Rebels reached double figures, UNLV forced 17 turnovers, and the Rebels shot 52.5 percent from the field and 48.1 percent from 3. UNLV’s largest lead was 31 points in its first true away game of the season.

Early on, the Rebels showed some rust after not playing any games for the past week. UNLV missed nine of its first 13 shots, including six 3s. Their main spark on offense came from sophomore Jackie Johnson III, who scored five quick points off the bench and assisted on a 3 on his way to a 12-point performance.

“We had a week layoff, which was our concern as a staff,” Kruger said. “We weren’t sure how we were going to handle that.”

Things began to change for the Rebels around the 12-minute mark. UNLV started to get out in transition, and the defense engaged. The Toreros (5-4) committed 12 turnovers in the first half, which the Rebels turned into 14 points.

UNLV also scored 20 points on the fast break during the first 20 minutes and finished the game with 31 points in transition.

“It looked the way it was supposed to look, with guys just sprinting out and making plays for each other,” Kruger said. “Getting to the corner, creating good space for each other, it was a really good feeling over there watching good defensive possessions lead to good, positive fast-break looks.”

While the defense helped UNLV take the lead, 3-point shooting allowed it to run away with the win. The Rebels went 13-for-27 from beyond the arc. Seven players made at least one 3, and three players made multiple attempts.

Senior Luis Rodriguez, who began the season in a bit of a shooting drought, went 3-for-5 from 3 and 7-for-9 from the floor on his way to a game-best 19 points.

UNLV also got strong performances from several of its important role players. Senior center David Muoka bounced back from a difficult weekend at the SoCal Challenge to finish with eight points on a perfect night from the floor. He also had seven rebounds, four blocks and a steal, and Kruger said he was particularly impressed with Muoka’s active hands.

“He’s not getting beat off the dribble, and anytime you’ve got someone who can protect the rim and erase mistakes, it just makes your defense that much better,” Kruger said.

Additionally, senior guard Justin Webster continued to do all the little things, grabbing two rebounds, two steals and dishing an assist. However, Webster finally had his first big shooting night of the season, going 4-for-4 from 3 to score 16 points.