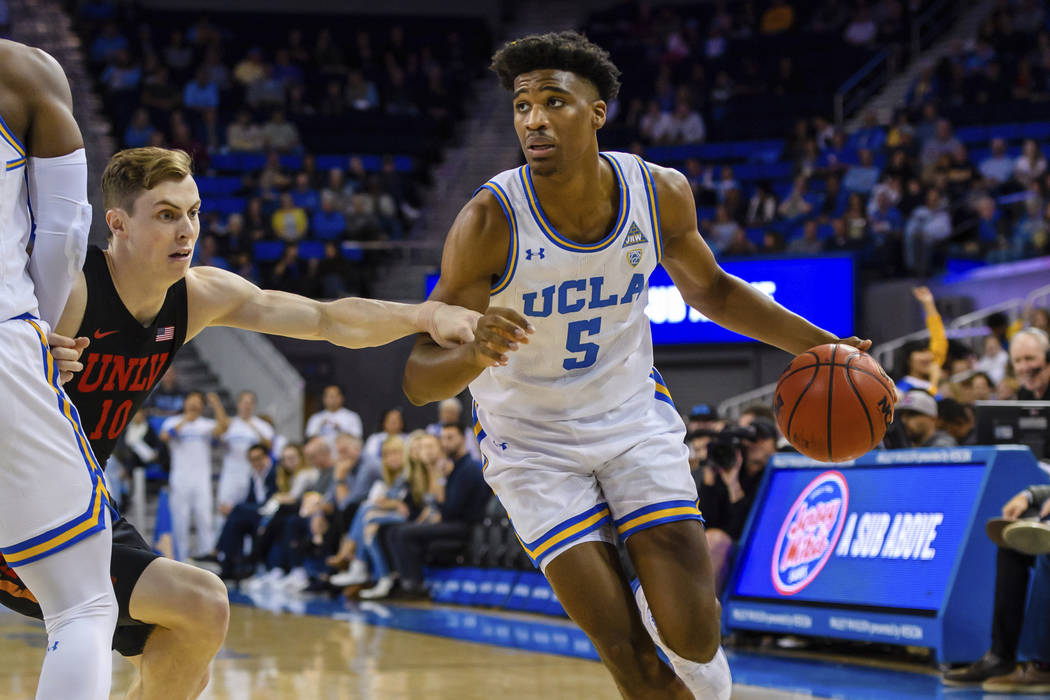 UCLA Bruins guard Chris Smith (5) drives the ball to to the outside during a college basketball game between the UNLV Rebels and the UCLA Bruins on November 15, 2019, at Pauley Pavilion in Los Angeles, CA. (Photo by David Dennis/Icon Sportswire) (Icon Sportswire via AP Images)

The Bruins clearly are much closer to that goal than UNLV.

They jumped all over the Rebels early in building a 22-point lead, and any comeback attempts by UNLV weren’t enough in a 71-54 loss Friday night at Pauley Pavilion.

The loss was the third straight for UNLV (1-3) but the first one that wasn’t close. The Rebels lost in overtime to Kansas State and at California.

UCLA (3-0) started quickly, going on a 14-point run for a 19-5 lead, and even with some UNLV surges, the Bruins were never seriously threatened.

“We got overwhelmed,” UNLV coach T.J. Otzelberger said. “Whether it was the environment or what the issue was, we got off to a slow start and didn’t get stops like we needed to. It’s going to be a consistent theme that we need to guard the dribble, need to finish plays on the glass and value the basketball. I thought that first six to eight minutes, those were the things that weren’t happening, and that has to be our identity. We dug ourselves a big hole as a result.”

When five players scored in double figures in the season opener against Purdue-Fort Wayne, the lack of reliable scoring options didn’t appear to be a problem.

It has been a big one.

Two players scored in double figures against Kansas State, and one of those, Hardy, dwarfed his teammates with 27 points. Three players reached double digits at Cal.

On Friday, only four players scored at all, though all four reached double figures.

Jonah Antonio is UNLV’s best outside shooter, but he has struggled to get open. He scored a combined 12 points in the Rebels’ two prior games, and after going scoreless in the first half against the Bruins, Antonio was benched in favor of Bryce Hamilton to open the final 20 minutes. Antonio played 11 minutes and did not score.

This isn’t to say Antonio or some of his other struggling teammates won’t find their way, but against three Power Five teams, the lack of consistent scoring threats was too much to overcome.

“Guys need to stay confident in themselves,” Hardy said. “Don’t get discouraged when shots aren’t going in. … Sometimes we pass up open shots, and then we mess ourselves up in the end.”

UNLV plays three games at the Thomas & Mack Center next week, but the Rebels get an early breather when Abilene Christian visits Monday. It’s a great opportunity for them to clean up some of their shortcomings and build confidence against a team ranked No. 293 by Kenpom.

The Rebels will need that kind of game because the next two are more challenging.

3. Planning for the future.

UNLV added the sixth member to its 2020 recruiting class when Reece Brown, a 6-foot-9-inch wing, announced on Twitter he had committed to the Rebels.

110% committed Beyond grateful for everybody that helped me get to this point. This is just the beginning #gorebels pic.twitter.com/K8DcmgcwFq

Brown, who attends Loomis Chaffee, a prep school in Windsor, Connecticut, visited UNLV about two weeks ago. He also considered Rice and Elon.