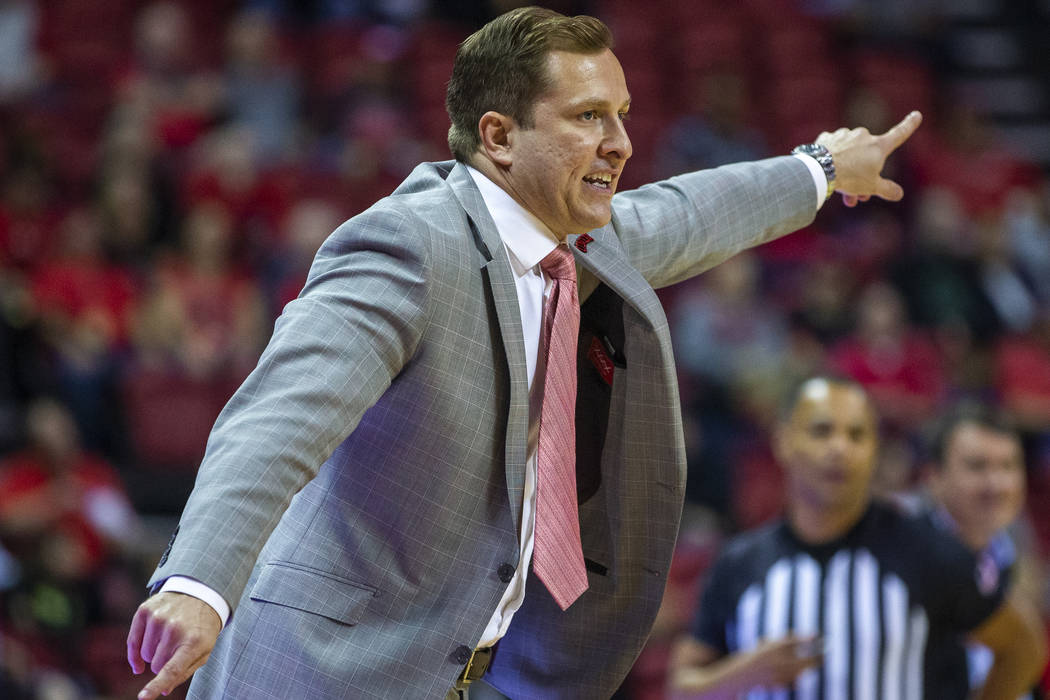 UNLV Rebels head coach T.J.Otzelberger directs his defense versus the Abilene Christian Wildcats during the second half of their NCAA game at the Thomas & Mack Center on Monday, Nov. 18, 2019, in Las Vegas. (L.E. Baskow/Las Vegas Review-Journal) @Left_Eye_Images

Most UNLV basketball fans probably would rather fast forward to next season when the roster will be considerably different, and so should expectations.

But there is still plenty left in this season for the Rebels, who open a new year and decade against the defending Mountain West regular season co-champion and tournament title holder, Utah State, at 8 p.m. Wednesday at the Thomas & Mack Center.

Not an easy way to enter conference play full time.

UNLV has had a difficult first season under coach T.J. Otzelberger, but the Rebels do come off back-to-back victories. Otzelberger said after the most recent one, a 64-49 win over Eastern Michigan on Saturday, that the Rebels could surprise some teams.

“There are moments when we can be really physical and aggressive and dominant on the glass,” Otzelberger said Tuesday. “If we can impose our will that way, I think we have the ability to be in games with teams that are probably better than us.”

At the same time, he said, “if we’re not that team … teams that maybe aren’t as good as us can be in the game.”

The Rebels are among a group of teams trying to get near the top in a league dominated by No. 13 San Diego State, Utah State and New Mexico.

Here’s a look at how the Mountain West shapes up. Teams are listed in order of their NCAA NET rankings, which last year replaced the RPI rankings and are used to help determine the NCAA Tournament field. (Rankings are through Monday):

■ Where the Aztecs stand: They went undefeated in nonconference play for just the fourth time in school history and second since 1930. The other recent undefeated nonconference team? That was the 2010-11 San Diego State team that went 34-3 and had some guy named Kawhi Leonard on the roster.

■ Where the Aggies stand: Their two best players, Sam Merrill (ankle) and Neemias Queta (knee), have been battling injuries. When healthy, Utah State is as good as any team in the conference.

■ Where the Lobos stand: An argument could be made that New Mexico is the Mountain West’s most talented team, but the indefinite suspensions handed to J.J. Caldwell and Carlton Bragg Jr. cast uncertainty over the season.

■ Where the Wolf Pack stand: First-year coach Steve Alford doesn’t have the talent that ruled the Mountain West the past three seasons, but this still is a team that should finish close to the top.

■ Where the Broncos stand: They are heating up with a three-game winning streak entering this week and will be a tough out almost any night, but the Broncos aren’t quite at the level of competing for the conference championship.

■ Where the Rams stand: Led by Nico Carvacho (13.1 points, 10.5 rebounds), Colorado State is playing better than it did last season in going 12-20. Losses to San Diego State and Boise State, however, showed the Rams still have ground to make up in the Mountain West.

■ Where the Rebels stand: It’s clear UNLV won’t turn around in one season under Otzelberger, but what happens over the next two months could help set the tone for the future.

■ Where the Bulldogs stand: Saturday’s blown 20-point lead to Riverside was jarring, and it was the Bulldogs’ sixth loss by six or fewer points. They either have serious issues or aren’t far from a turnaround.

■ Where the Falcons stand: More was expected from one of the Mountain West’s more experienced teams. But they also tend to be tough in conference play. No team should overlook the Falcons.

■ Where the Spartans stand: San Jose State is about where expected, but the Spartans also gave San Diego State a battle before losing 59-57.

■ Where the Cowboys stand: Fighting San Jose State to stay out of the Mountain West cellar speaks to how far this program has fallen from just two years ago when Wyoming was a 20-win team on a fairly regular basis.