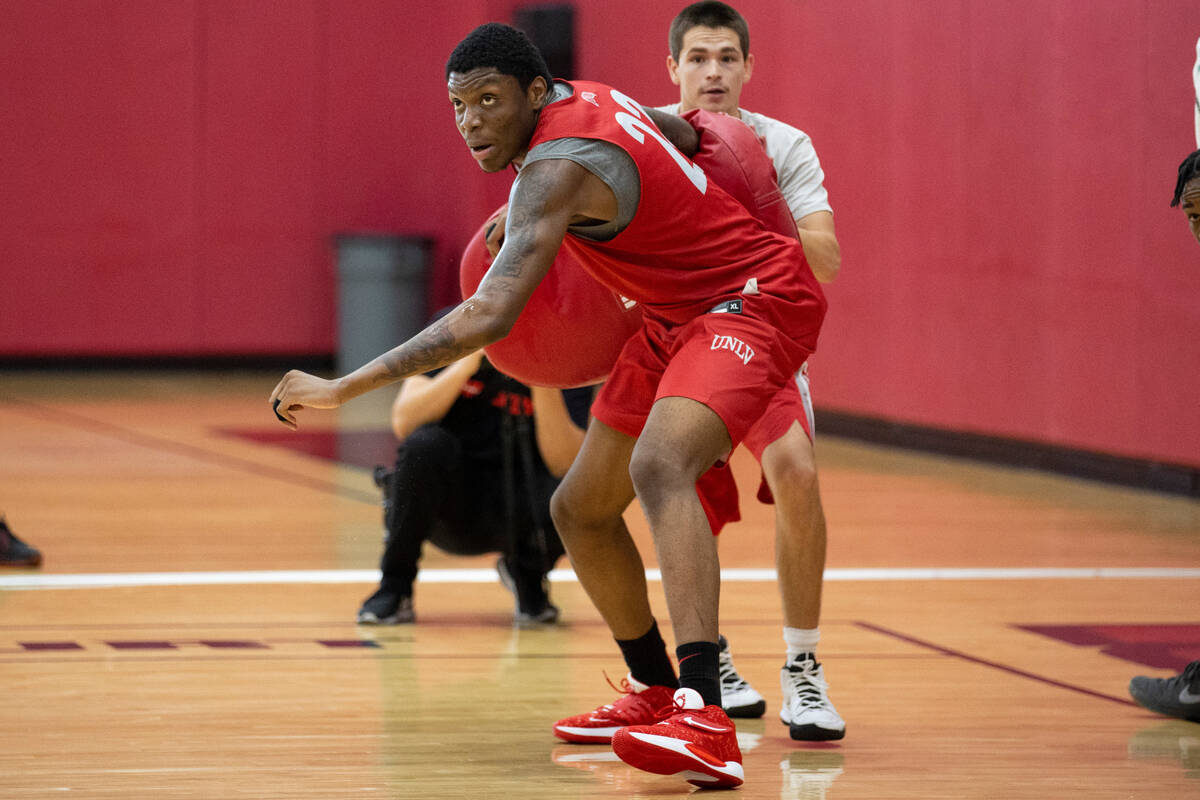 Of the six Division I transfers who joined the UNLV men’s basketball team in the offseason, one had yet to make his regular-season debut: West Virginia’s Isaiah Cottrell.

The 6-foot, 10-inch forward, a Bishop Gorman graduate, had missed the Rebels’ first six games with a foot injury.

With 7:05 left in the first quarter of UNLV’s Saturday matchup with NAIA opponent Life Pacific, Cottrell checked into the game for his first minutes of the season.

“Isaiah is going to be a big piece of this team moving forward because he can do so many things,” UNLV coach Kevin Kruger said. “He adds another element to this team.”

The Rebels immediately fed Cottrell, who received a pass in the post and was fouled on his shot attempt. He knocked down both free throws for his first points of the season. He played eight minutes and scored five points, with two rebounds and a made 3-pointer.

Cottrell was one of 14 Rebels to score as they rolled past Life Pacific for a 126-54 win at the Thomas & Mack Center and improved to 7-0 on the season.

“I’m proud of them for getting good spacing, sharing the ball and making plays for each other,” Kruger said.

Junior forward Karl Jones, a Los Angeles Southwest College transfer, made the most of his minutes on the floor. He led the Rebels with a career-high 20 points and added 12 rebounds.

The 6-10 forward made 10 of 12 shots, including eight dunks, and helped UNLV dominate inside. The Rebels had 70 points in the paint and grabbed 58 rebounds.

Jones led a Rebels offensive attack that had five players score in double figures. UNLV made 61.9 percent of its shots, 15 of which were 3-pointers, and assisted on 32 of its 52 made field goals.

“It was really important for everybody to get their confidence up,” said sophomore guard Jackie Johnson III, who had 14 points. “It was a big confidence booster.”

The Warriors, who had averaged 89.6 points per game in their seven NAIA games and shot at a 43.6 percent clip from 3-point range, made three of their first four shots and led 8-7 a few minutes into the game.

But it didn’t take long for UNLV to start to impose its will.

Fifth-year guard EJ Harkless stuck out his hand and disrupted an intended pass to a Life Pacific player. He controlled the loose ball and threw a long outlet pass to Elijah Parquet, and the Colorado transfer guard threw down a one-handed dunk.

The rout was on as UNLV utilized a 22-4 run in the middle of the first quarter to pull ahead and never looked back.

The Rebels forced 27 turnovers, 10 of which came in the first half, helping the Rebels compile 23 fast-break points.

“We did a pretty good job of focusing on (their guys who can shoot it well),” Kruger said. “And just knowing who they were closing out to and guarding. … For the most part, we did a good job of making their looks a little tougher.”

The Rebels will have a week off before they play at the University of San Diego on Saturday.