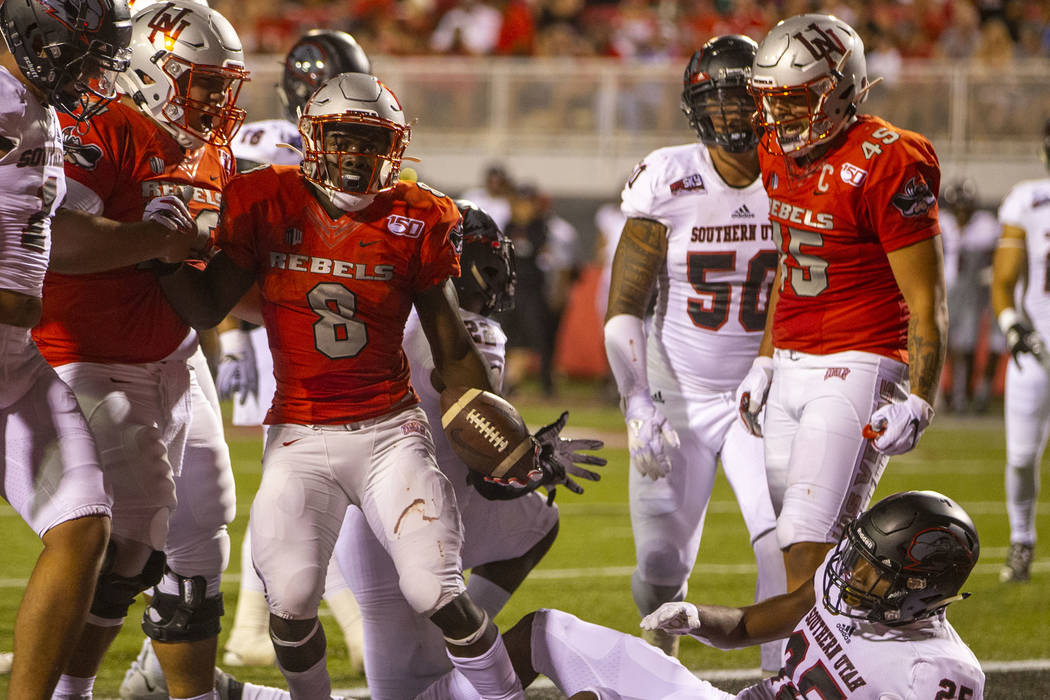 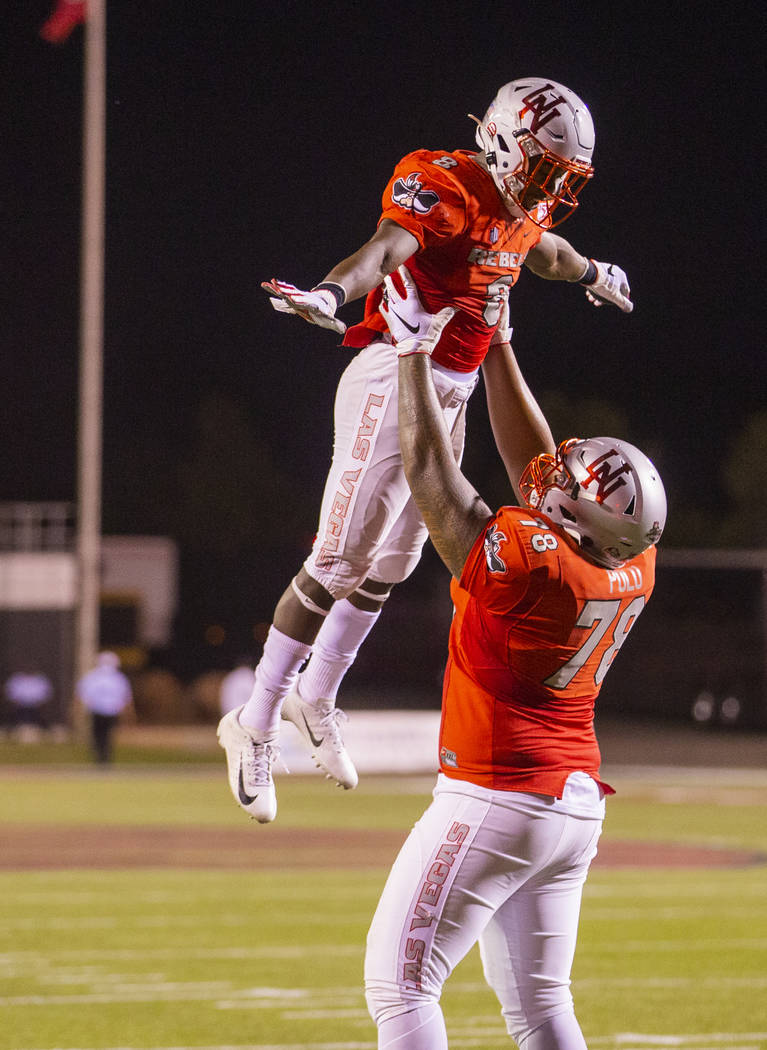 UNLV Rebels running back Charles Williams (8) is hoisted by UNLV Rebels offensive lineman Justin Polu (78) as they celebrate a touchdown in the first half over Southern Utah at Sam Boyd Stadium on Saturday, Aug. 31, 2019, in Las Vegas. (L.E. Baskow/Las Vegas Review-Journal) @Left_Eye_Images 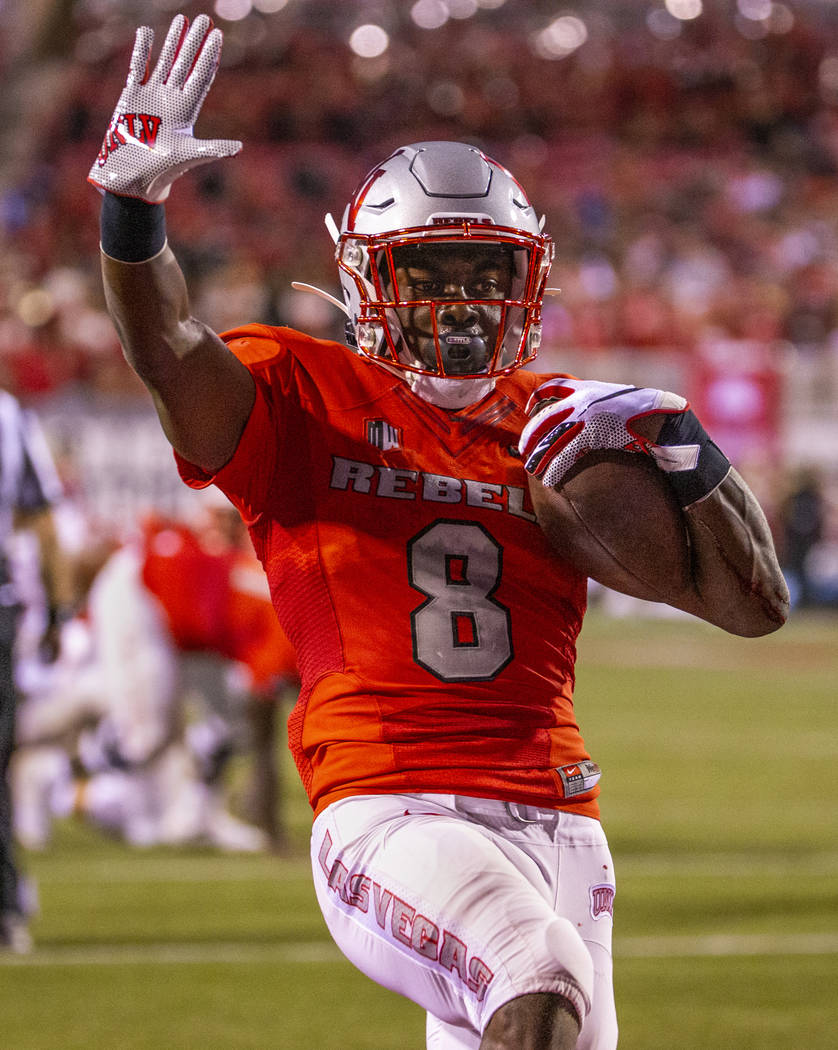 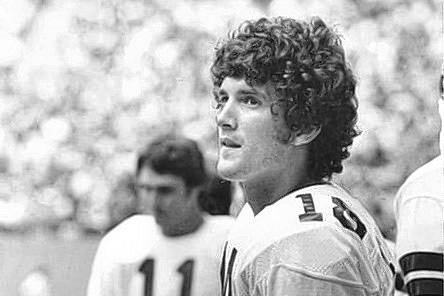 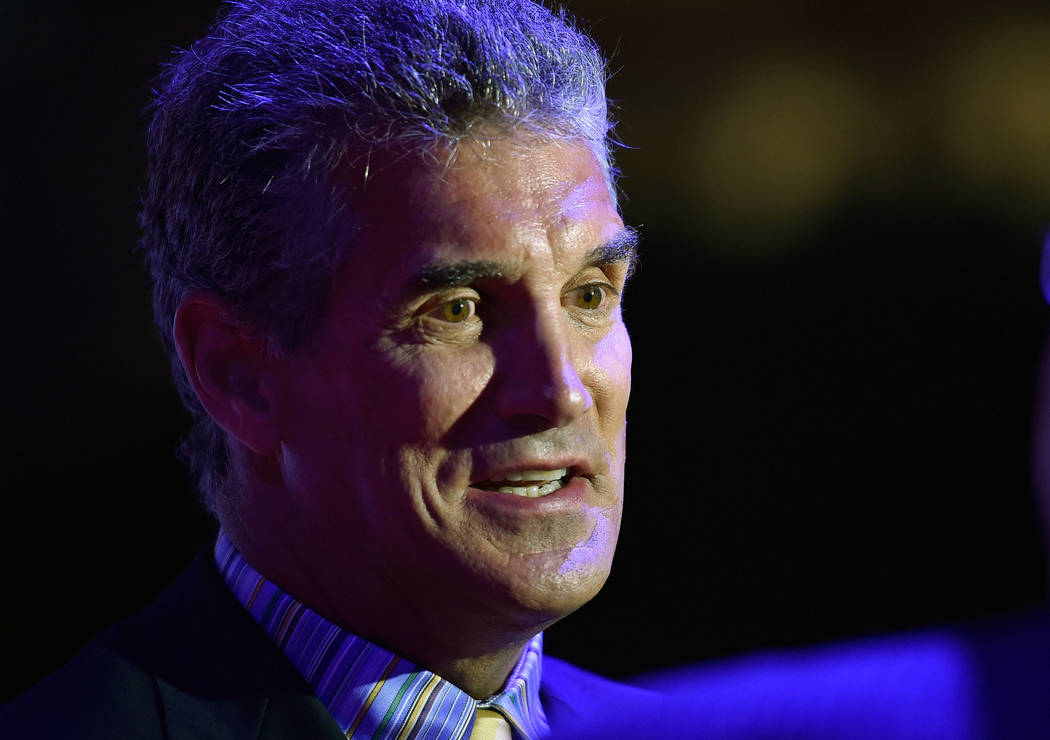 Considering Southern Utah is a 2½-hour drive from Las Vegas, it’s not surprising the Thunderbirds have eight players from Southern Nevada on their roster.

They returned home Saturday to play UNLV in the season opener for both teams at Sam Boyd Stadium.

“Vegas has always been kind of a hotbed for us,” Southern Utah coach Demario Warren said earlier in the week. “I think (coach Tony) Sanchez going to UNLV has hurt that a little bit. He’s recruited some of those guys we’ve been recruiting, but (Las Vegas) has been great to us.

“We’ve got a lot of Vegas kids on our team right now. They’re excited to go play back at home.”

The last time Southern Utah was at Sam Boyd, the Thunderbirds left with a 41-16 victory eight years ago.

“Any time we get to play against an FBS (team), it’s fun for our guys,” Warren said. “They want to play versus the top level.”

Charles Williams picked up his fourth career 100-yard rushing game — by the second quarter. He had 142 yards by halftime alone, averaging 10.1 yards per carry.

Williams also rushed for two touchdowns in just more than a quarter of play, the first time the junior has scored multiple TDs. He added a third touchdown run with 40 seconds left in the first half.

Not a bad start for someone replacing the Rebels’ second all-time leading rusher in Lexington Thomas. But Williams was the starter going into the 2017 season before suffering an ankle injury in the opener.

UNLV used four running backs in the first half, keeping someone fresh throughout.

One back who didn’t play was second-teamer Chad Magyar. He stood on the sideline, but did not suit up. No immediate reason was given, but he was not injured.

As part of the regular tribute this season to the different decades of UNLV football at Sam Boyd, former Rebels quarterback Glenn Carano was recognized Saturday. He played from 1973 to 1976, tying in with the night’s 1970s theme.

Carano, who went 28-8 as a starter, is the winningest quarterback in school history. His 5,095 yards and 37 touchdown passes each ranked fifth at UNLV.

The Dallas Cowboys selected him in the second round of the 1977 NFL draft, but Carano is known more for his life beyond football. He is an executive for Eldorado Resorts, which is in the process of buying Caesars Entertainment Corp. His daughter, Gina, is a former MMA star.