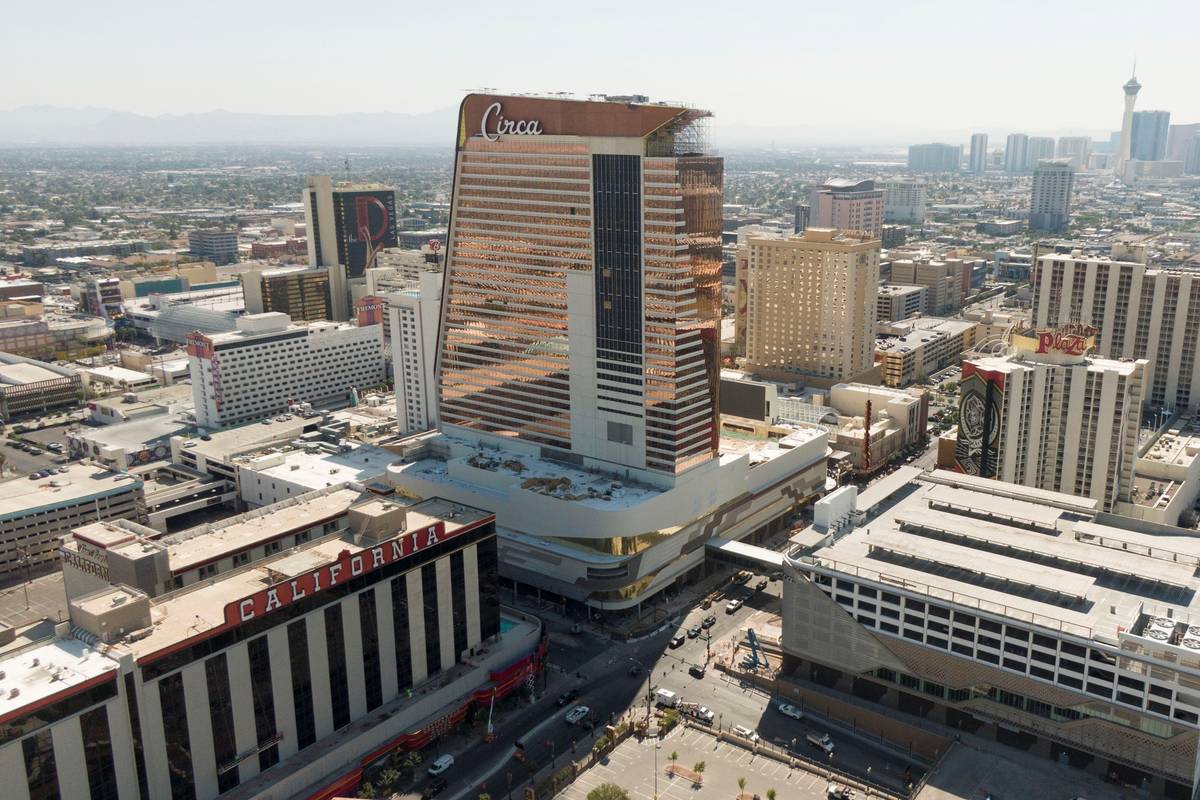 Aerial photo of the North entrance to Circa Resort and the covered bridge to the Garage Mahal parking structure in downtown Las Vegas on Thursday, September 24, 2020. (Michael Quine/Las Vegas Review-Journal) @Vegas88s

Everybody knows Derek Stevens plans to open his Circa resort as a 21-and-older property.

What most people don’t know is that there will be one location in the downtown Las Vegas property — Barry’s Downtown Prime restaurant — where under-21s will be able to go.

Stevens told the Nevada Gaming Commission on Thursday that chef Barry Dakake negotiated in his lease with Circa the exception that enables him to bring younger guests to the restaurant.

Stevens explained that there will be four entry points to Circa — at Fremont and Main streets, at Fremont and First streets, off Ogden Avenue and through the climate-controlled elevated entry from the Garage Mahal — and he figures identification checks at those locations will occupy 20 hours a day at 10 seconds per ID check to do an estimated 72,000 screenings daily.

People with reservations to Barry’s will need a Circa escort to get to the restaurant, the property’s only basement venue.

Commissioners on Thursday spent about an hour questioning Stevens and two of his top-level executives before unanimously approving the licensing of Circa, the first from-the-ground-up casino built in downtown Las Vegas in 40 years.

Licensing approvals also will enable Circa Sports to open a satellite sportsbook at the Tuscany early next year.

The property, which embodies everything Stevens enjoys about Las Vegas, opens its doors to the public Oct. 28.

Thursday’s hearing with commissioners went almost exactly the same as the one with the Nevada Gaming Control Board on Sept. 9.

Stevens regaled commissioners with stories about his early visits to Las Vegas on pleasure trips and to attend conventions. He talked about how he and his brother, Greg, talked gaming and how to finance a casino with his parents at Thanksgiving dinners. He spoke of how much he’s into sports wagering and how his three-story Circa sportsbook will become a landmark in Las Vegas that people will flock to and how the first bet he ever made in Las Vegas was putting down a quarter on a Sigma Derby horse racing game.

Stevens did not disclose financial details of the property, labeling them as confidential, but commissioners were satisfied that with the Golden Gate and the D Las Vegas as collateral, Circa could endure financial pressures, even during the pandemic.

Baseball fans will be able to learn more about Circa this week when the company launches its first-ever national advertising campaign during Major League Baseball wild-card games scheduled Tuesday and Wednesday.

He told commissioners he planned to target opening 777 rooms, which he described as “a very Las Vegas number” and that he was grateful that the Gaming Control Board gave him permission for a split opening, with the casinos, pool and food amenities targeted for Oct. 28 and the hotel rooms in late December. Normally, resorts are required to open rooms and the casino at the same time.

The opening of Circa also will improve Southern Nevada’s employment picture with 1,100 of 1,500 jobs already filled. More will open up when the hotel rooms come online.