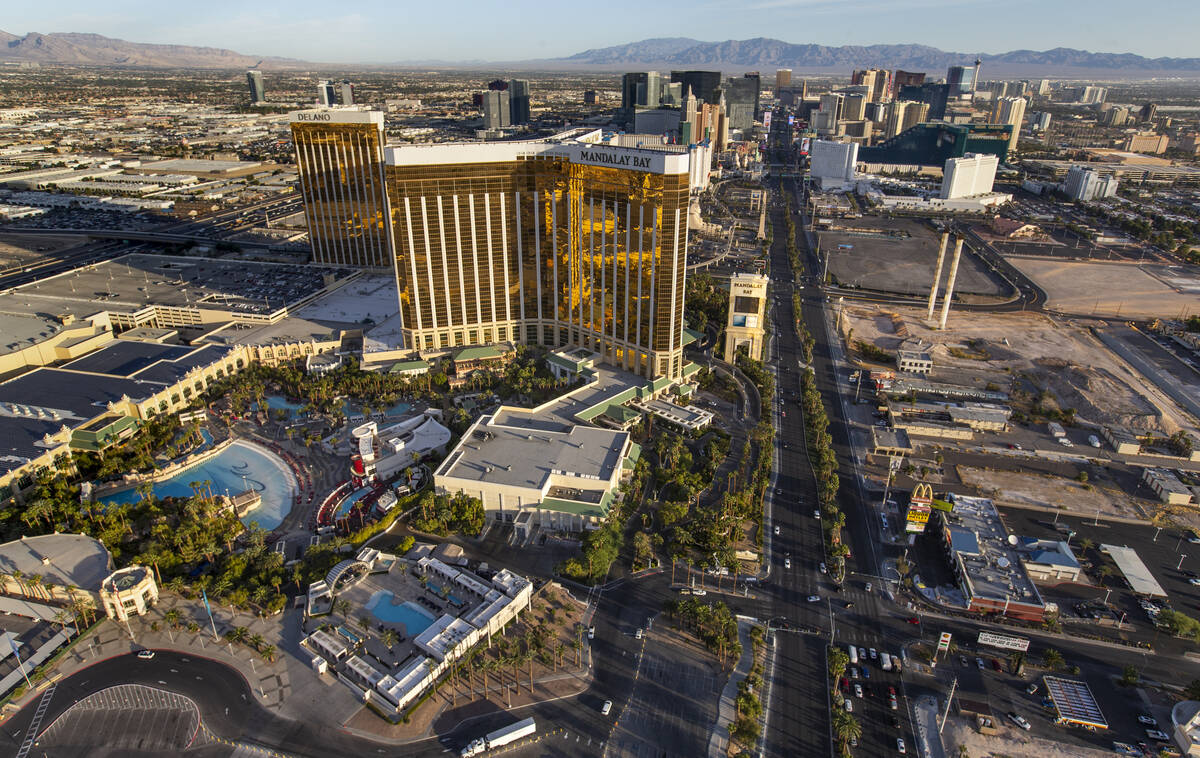 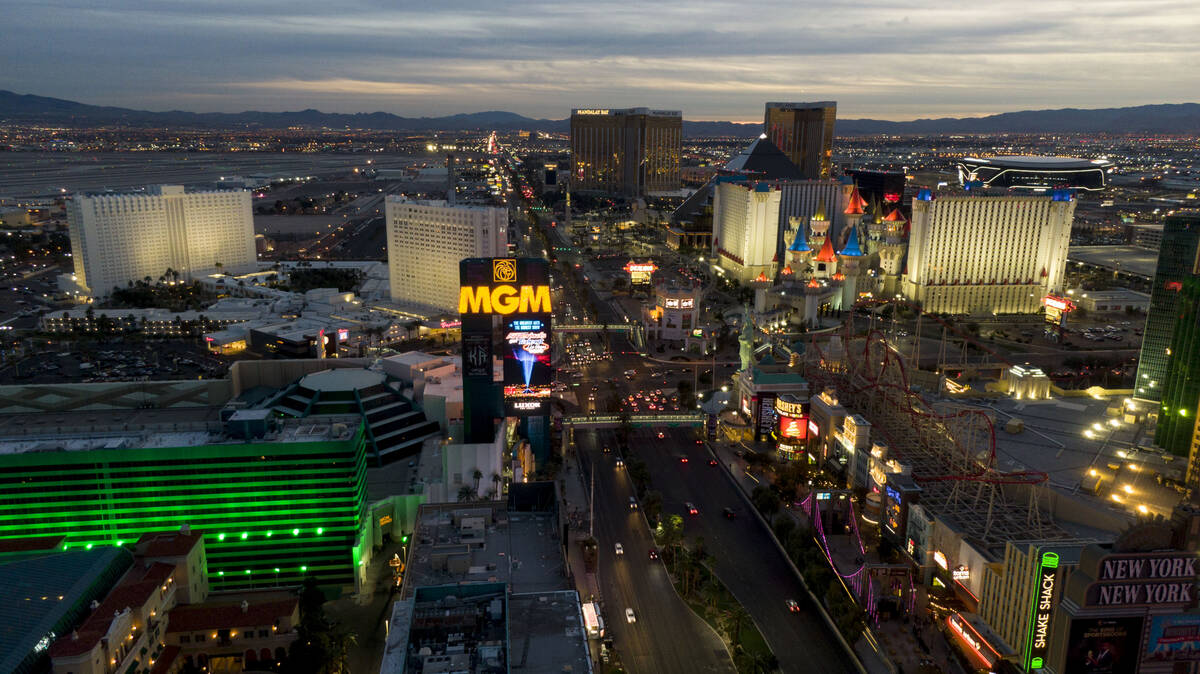 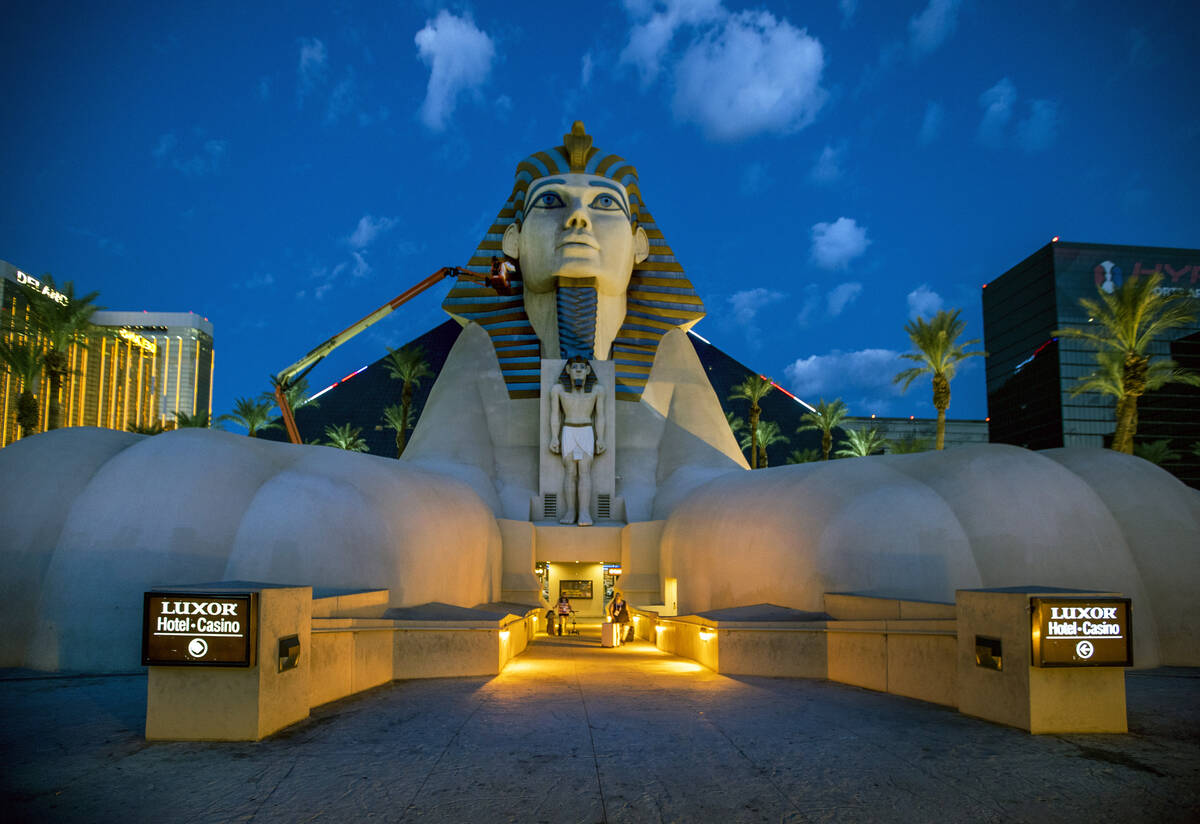 Access Solutions hangs a Raiders eye patch on the Great Sphinx of Giza replica outside of the Luxor on Thursday, Sept. 9, 2021. The banner was created by Screaming Images, the MGM Resort property readied the tourist-favorite photo spot ahead of the Raiders Monday Night Football game. (L.E. Baskow/Las Vegas Review-Journal) @Left_Eye_Images 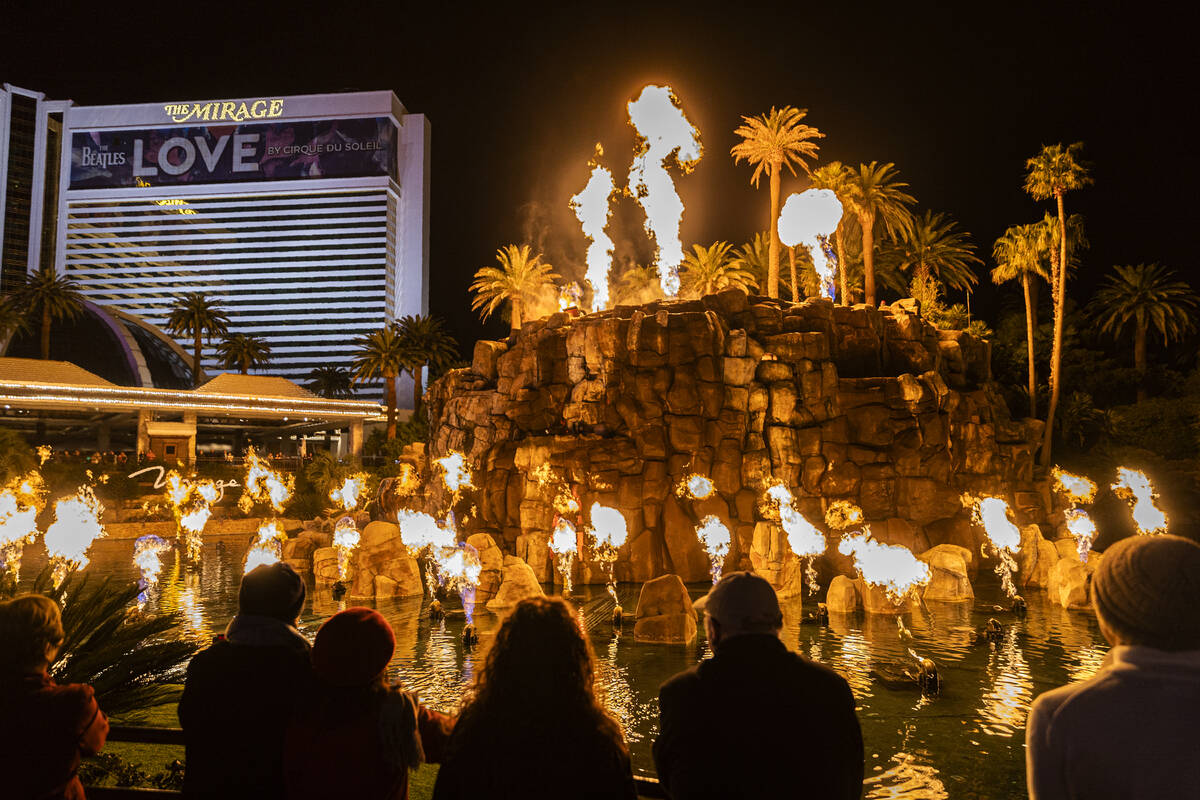 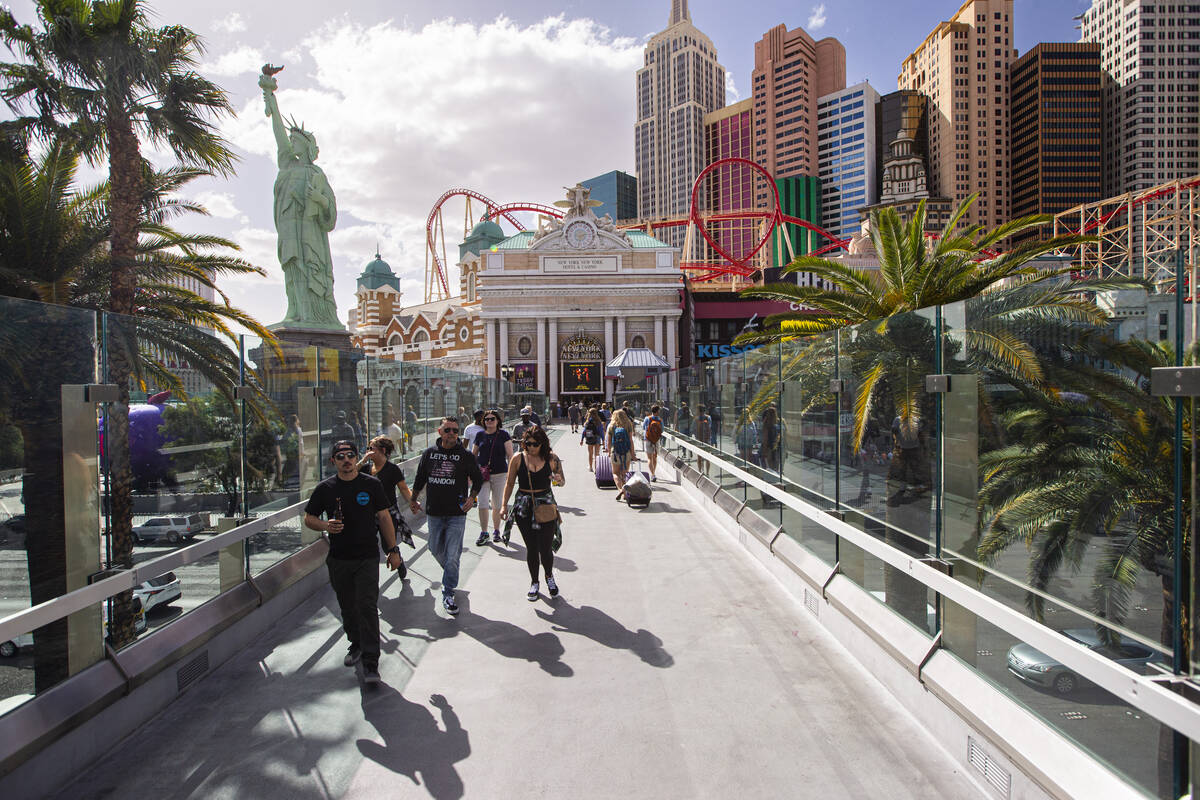 People walk along the pedestrian bridge between the New York-New York and the MGM Grand on Monday, March 28, 2022, in Las Vegas. (Chase Stevens/Las Vegas Review-Journal) @csstevensphoto

Caesars Entertainment spinoff Vici Properties said Friday that it completed its $17.2 billion buyout of MGM Growth Properties. The deal was first announced in August and included the assumption of about $5.7 billion of debt.

It also picked up several other casino properties outside Nevada, including MGM Grand Detroit and MGM National Harbor near Washington, D.C.

All told, Vici is slated to receive more than $1 billion in initial annual rent from the newly acquired properties, the firm indicated.

The buyout likely won’t result in noticeable changes at the resorts anytime soon, as Vici does not operate the properties but rather collects rent from the companies that do.

Still, it easily ranks among the largest real estate sales the Strip has ever seen and significantly expands Vici’s holdings in the famed casino corridor, making the New York company one of the biggest property owners on Las Vegas Boulevard.

The company also is now “the largest owner of hotel and conference real estate in America,” CEO Ed Pitoniak said.

MGM Resorts, which spun off MGM Growth in 2016 and was its controlling shareholder, received about $4.4 billion in cash as part of Vici’s buyout, according to a company news release Friday.

Operations at MGM Resorts-run properties now owned by Vici “will continue as before for guests and employees,” MGM spokesman Brian Ahern told the Review-Journal.

MGM will use proceeds from the deal to invest in its “core business,” President and CEO Bill Hornbuckle said in an earnings call Monday, adding the company would also “continue to seek meaningful growth opportunities.”

MGM announced it is offering $607 million to buy LeoVegas, a Swedish online gaming firm. It also is in the process of buying the operations side of The Cosmopolitan of Las Vegas for more than $1.6 billion; will begin spending on a new resort in Osaka, Japan, later this year; and plans to build a 1,000-room resort in the United Arab Emirates.

Vici was spun off from Caesars Entertainment in 2017 as the casino chain’s main operating unit emerged from bankruptcy. By the end of that year, Vici’s real estate holdings on the Strip consisted of Caesars Palace and Harrah’s, a securities filing shows.

Vici was already in the process of growing its portfolio on Las Vegas Boulevard before the MGM Growth buyout was unveiled.

Casino operator Las Vegas Sands Corp. announced in March 2021 that it was selling its properties on the Strip — The Venetian, Palazzo, and former Sands Expo and Convention Center — for about $6.25 billion to Vici and investment giant Apollo Global Management.

Under the transaction, which closed in February, Vici acquired the real estate for $4 billion. Apollo acquired the operations side for $2.25 billion and leased the former Sands sites from Vici.

Since its formation, Vici has completed about $29.5 billion of mergers and acquisitions and other investment activity, general counsel Samantha Sacks Gallagher said in a news release Friday. 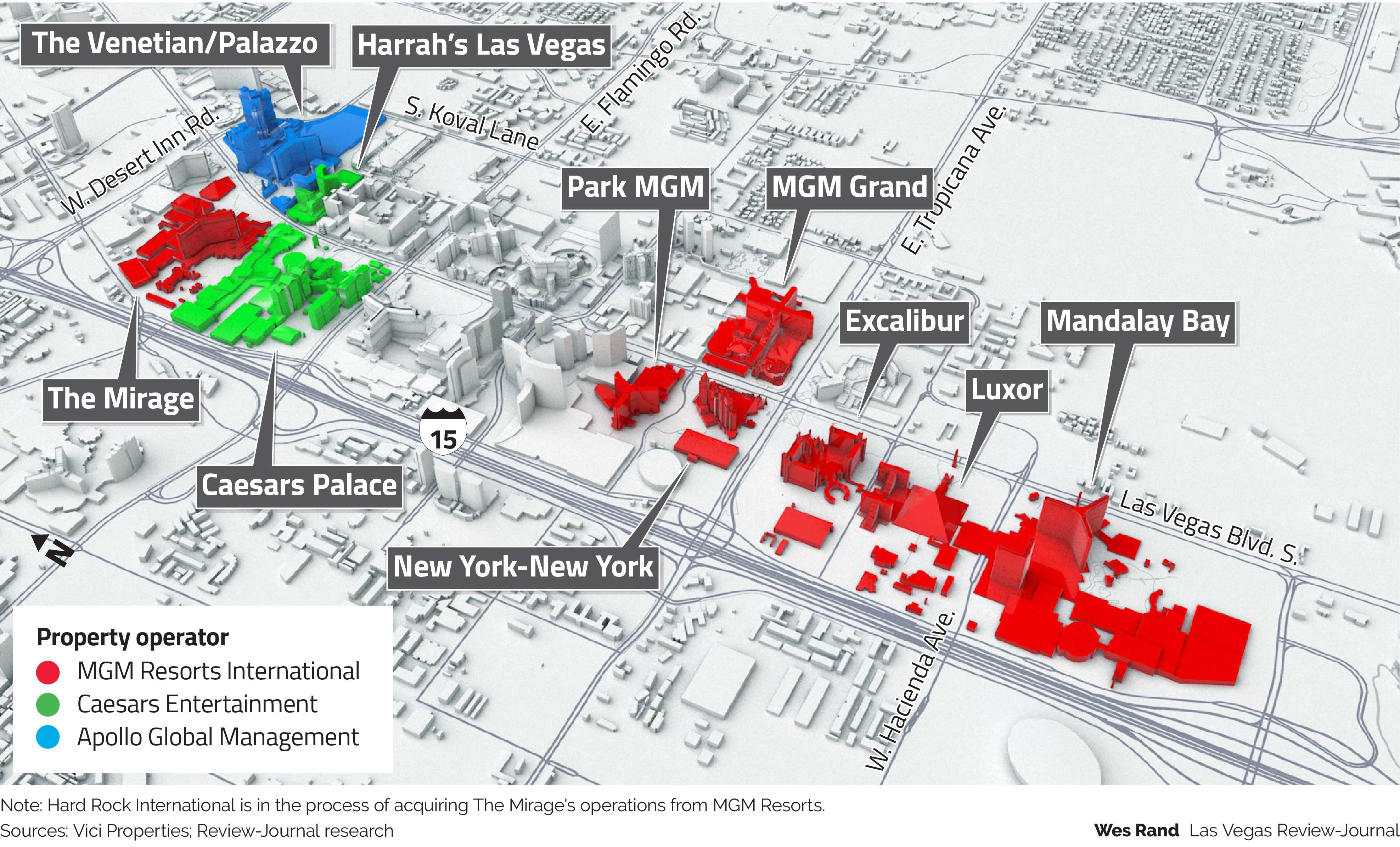