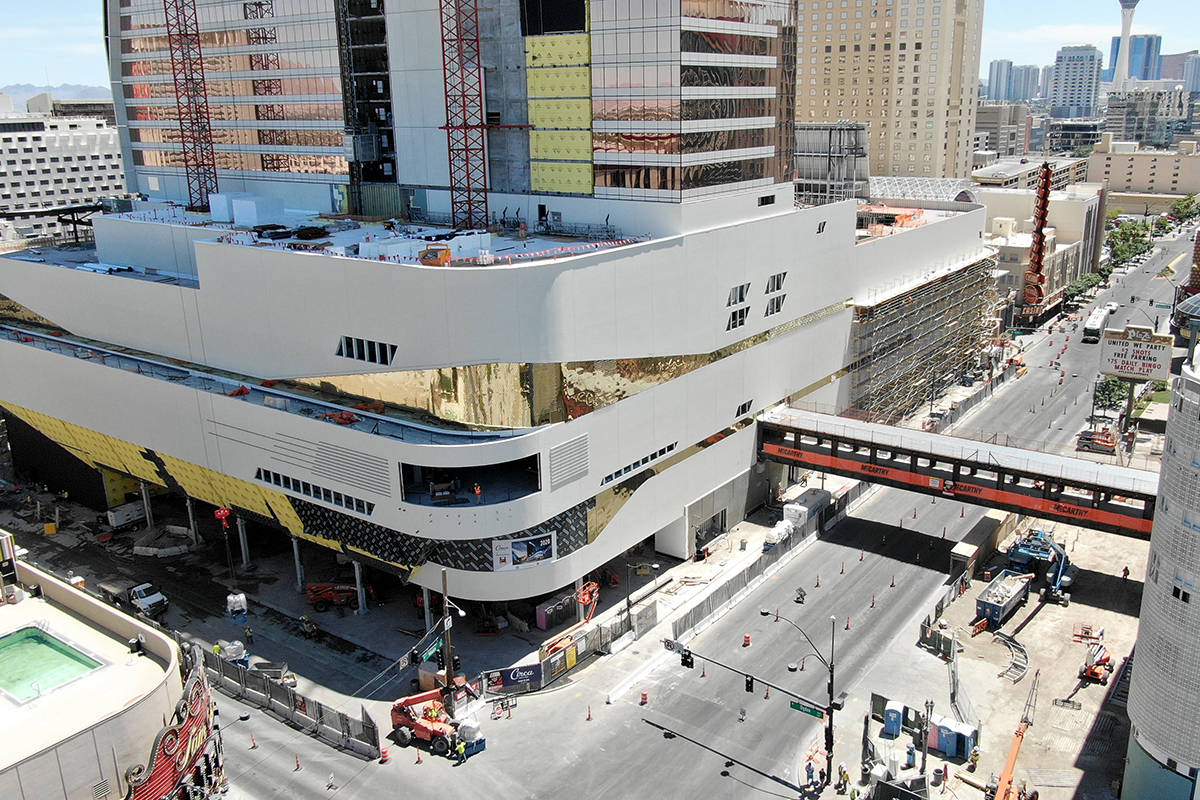 Aerial photo of the North entrance to Circa Resort and the covered bridge to the Garage Mahal parking structure in downtown Las Vegas on Friday, June 19, 2020. (Michael Quine/Las Vegas Review-Journal) @Vegas88s 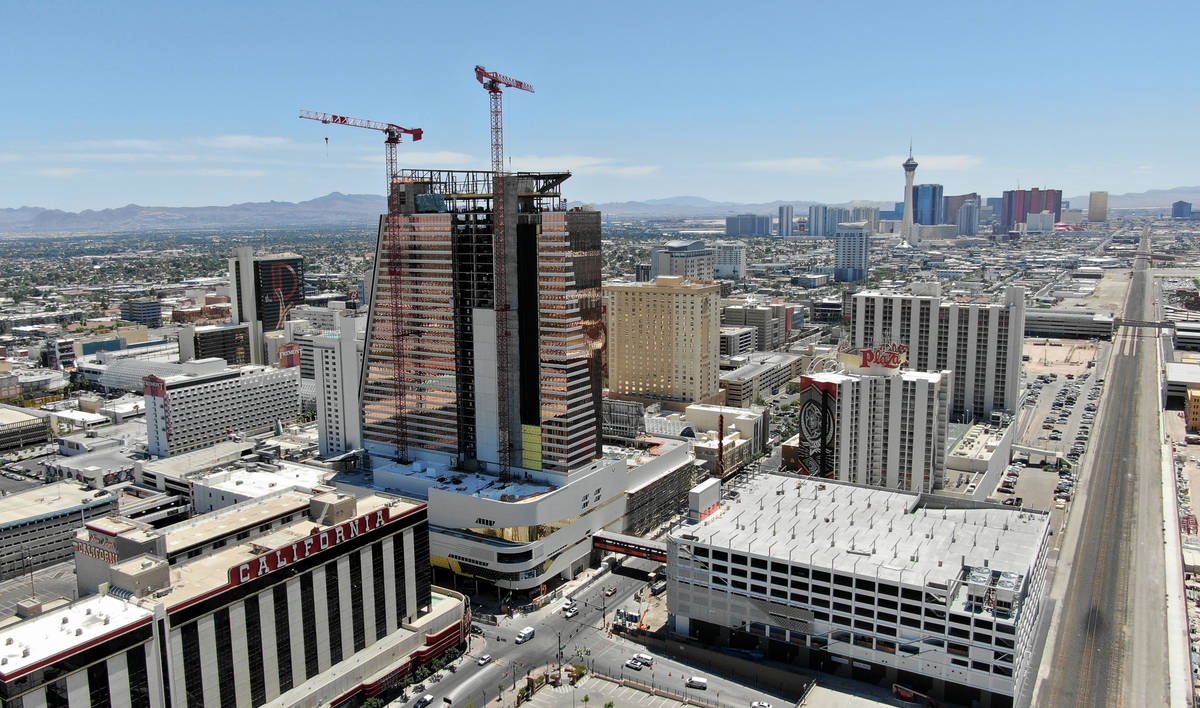 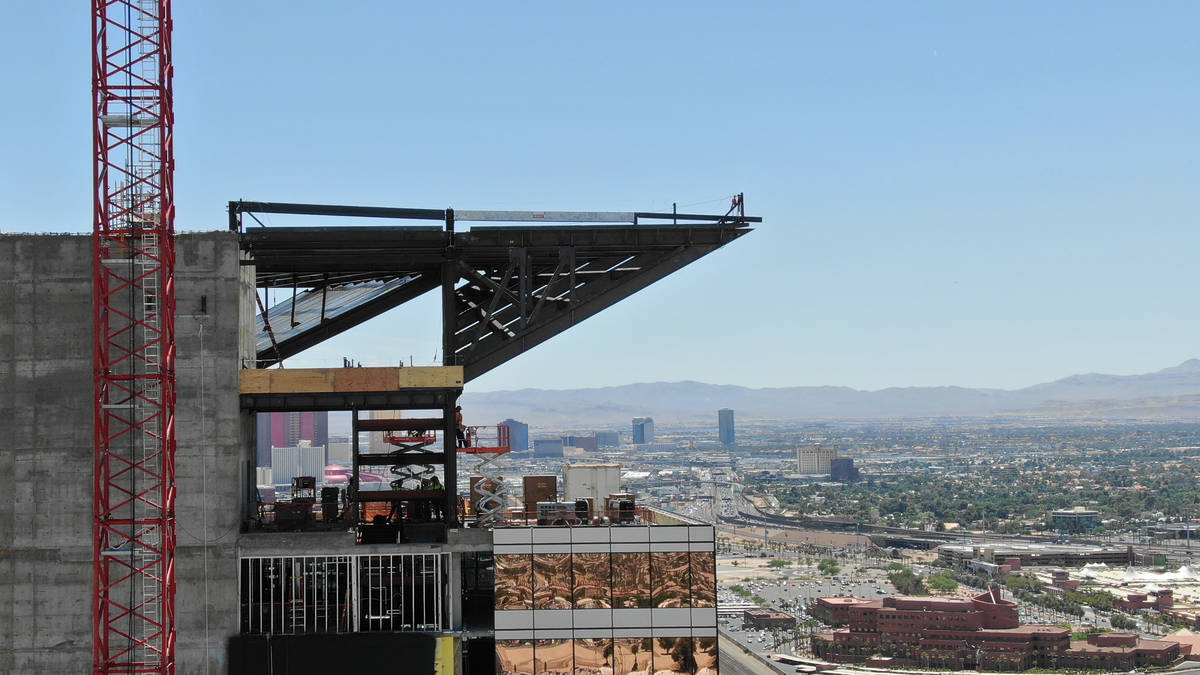 A white painted steel beam sits along the upper side of a triangular extension as the final topping out beam in the construction of the Circa hotel casino which plans to open October 28, 2020 in downtown Las Vegas on Friday, June 19, 2020. (Michael Quine/Las Vegas Review-Journal) @Vegas88s 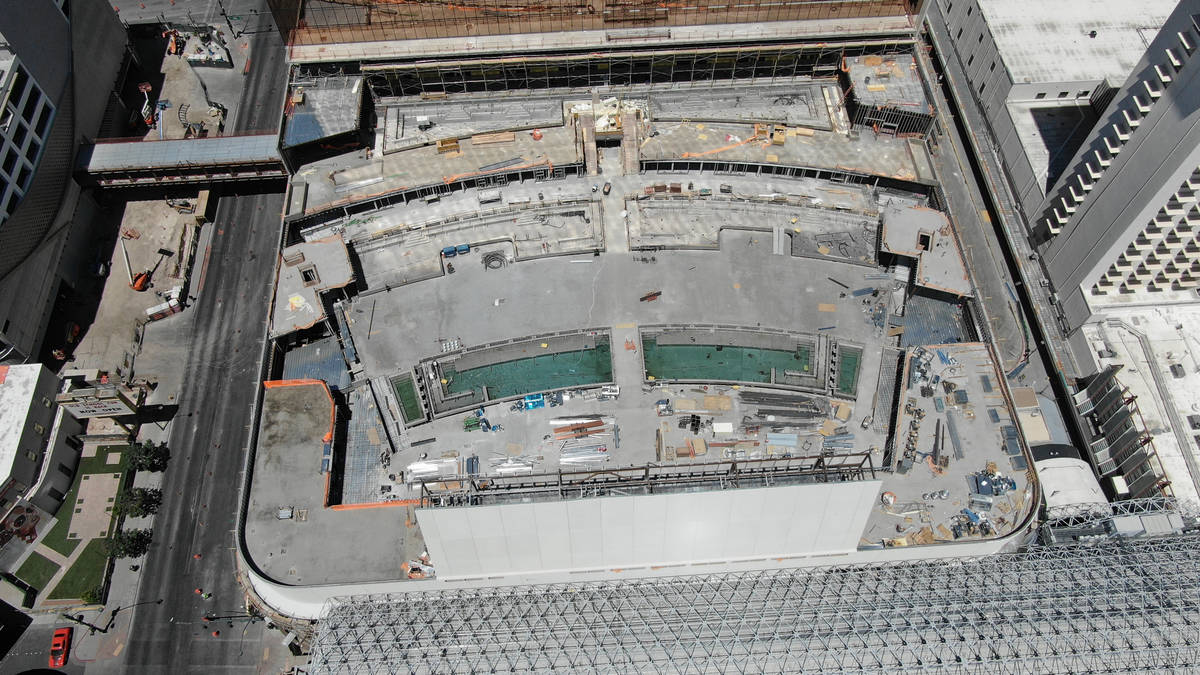 Aerial photo of construction at Circa hotel casino and the multitiered pool amphitheater which will have six tiered pools and a 125-foot high-resolution screen in downtown Las Vegas, on Friday, June 19, 2020. (Michael Quine/Las Vegas Review-Journal) @Vegas88s

Downtown Las Vegas’ Circa resort will begin taking room reservations on Wednesday but won’t be welcoming guests with children.

Circa developer Derek Stevens late Monday confirmed that when the property opens for business Oct. 28 persons under the age of 21 won’t be allowed.

“Once, Las Vegas held a certain mystique as this fabulous place where only grown-ups could play,” the Circa tweet says. “Call us old-fashioned, but we think adults need some of that mystique back in their lives. Book your room starting June 24th at 9am for #CircaLasVegas, a 21+ experience.”

Once, Las Vegas held a certain mystique as this fabulous place where only grown-ups could play. Call us old-fashioned, but we think adults need some of that mystique back in their lives. Book your room starting June 24th at 9am for #CircaLasVegas, a 21+ experience. pic.twitter.com/HBW5gweARn

“Circa was expensive to build and we couldn’t afford the arcade LOL,” Stevens messaged.

Stevens said his other properties downtown — D Las Vegas and Golden Gate — would continue to allow guests with children.

On Friday, Stevens and a contingent of Circa executives gathered with the media as the last steel beam was hoisted into place from the intersection of Main Street and Ogden Avenue. At the time, Stevens hinted that there would be another announcement coming this week and that next month there would be another surprise involving a rooftop attraction where the last beam was placed.

Circa, the first from-the-ground-up casino built in Las Vegas since the Lucky Dragon opened its doors in 2016, also is the tallest structure downtown at 458 feet.

The policy was relaxed as guests wanted their children to be able to see the floral displays at the property’s Conservatory.

When Bellagio was turned over to MGM Resorts International in the company’s acquisition of Mirage Resorts in 2000, the policy gradually disappeared.