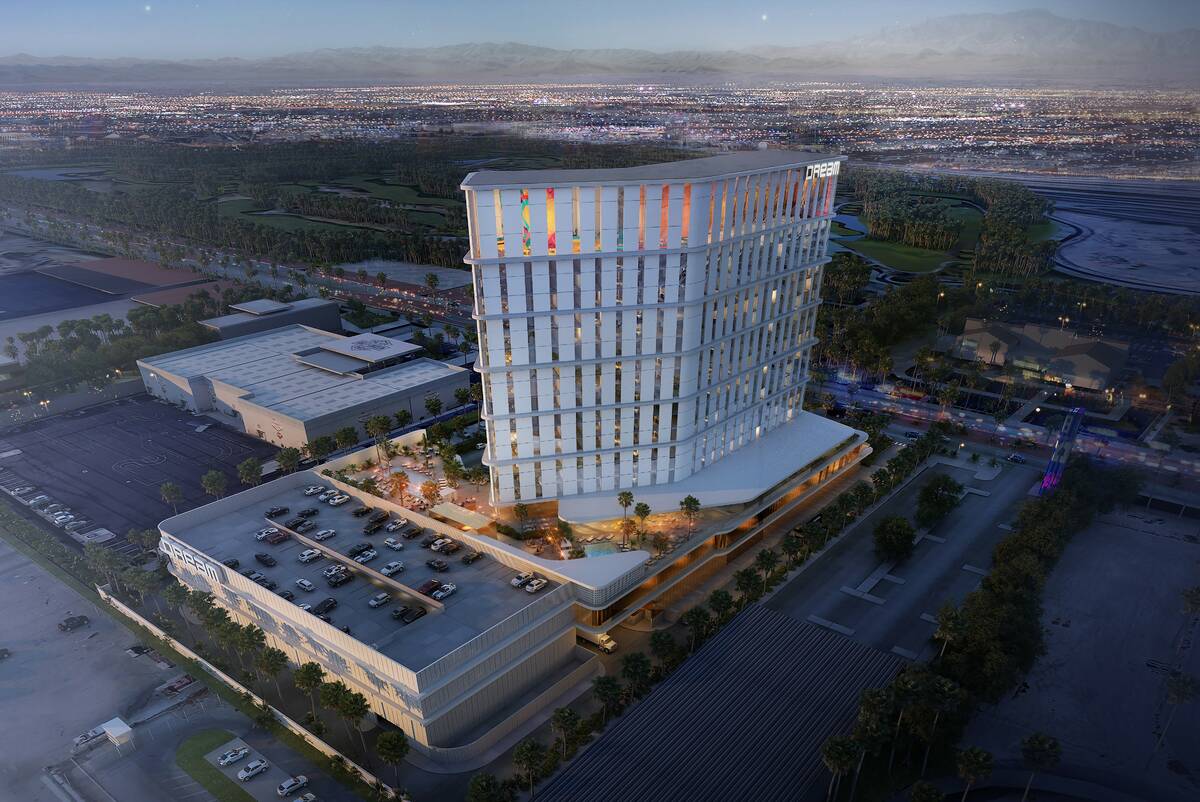 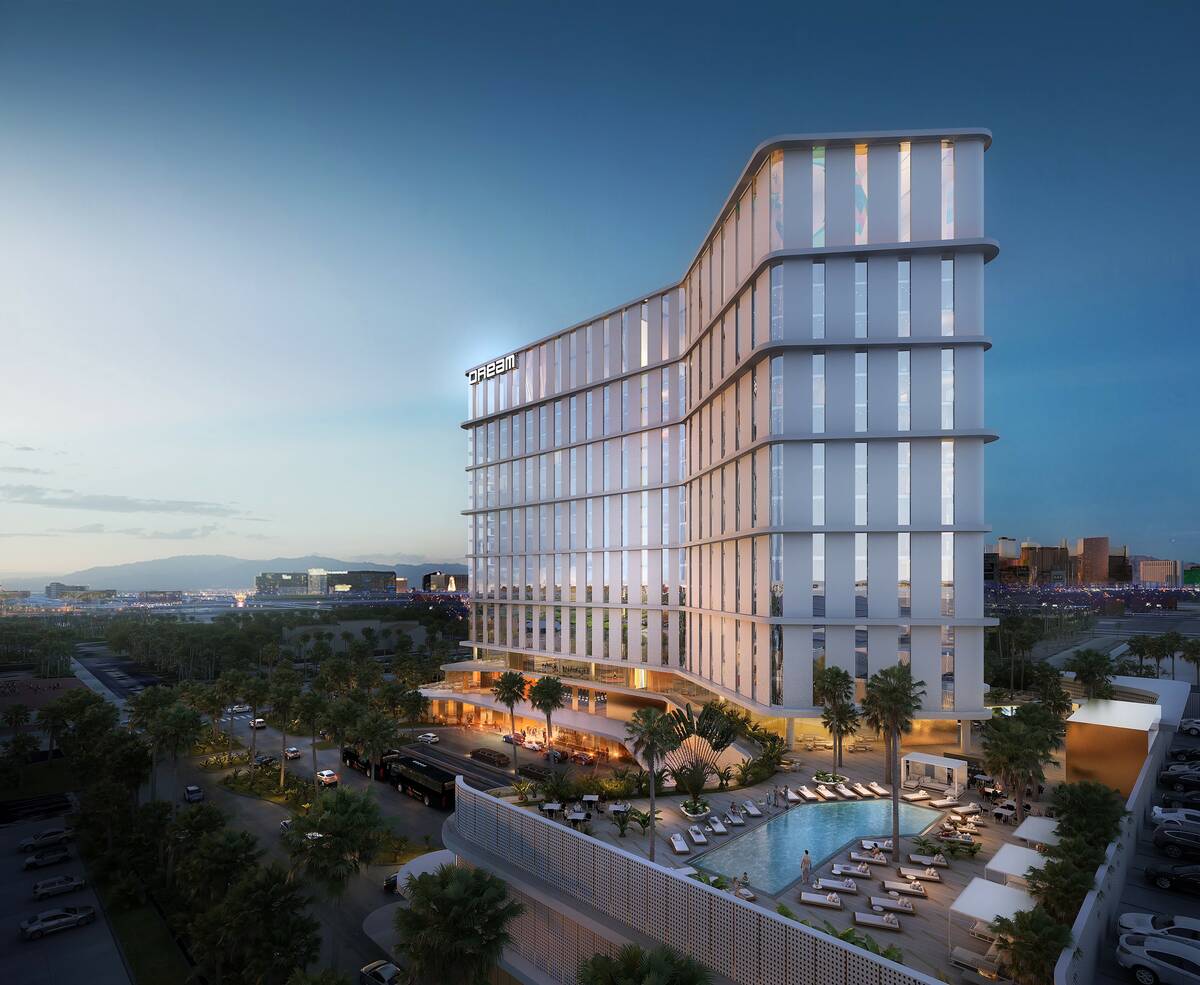 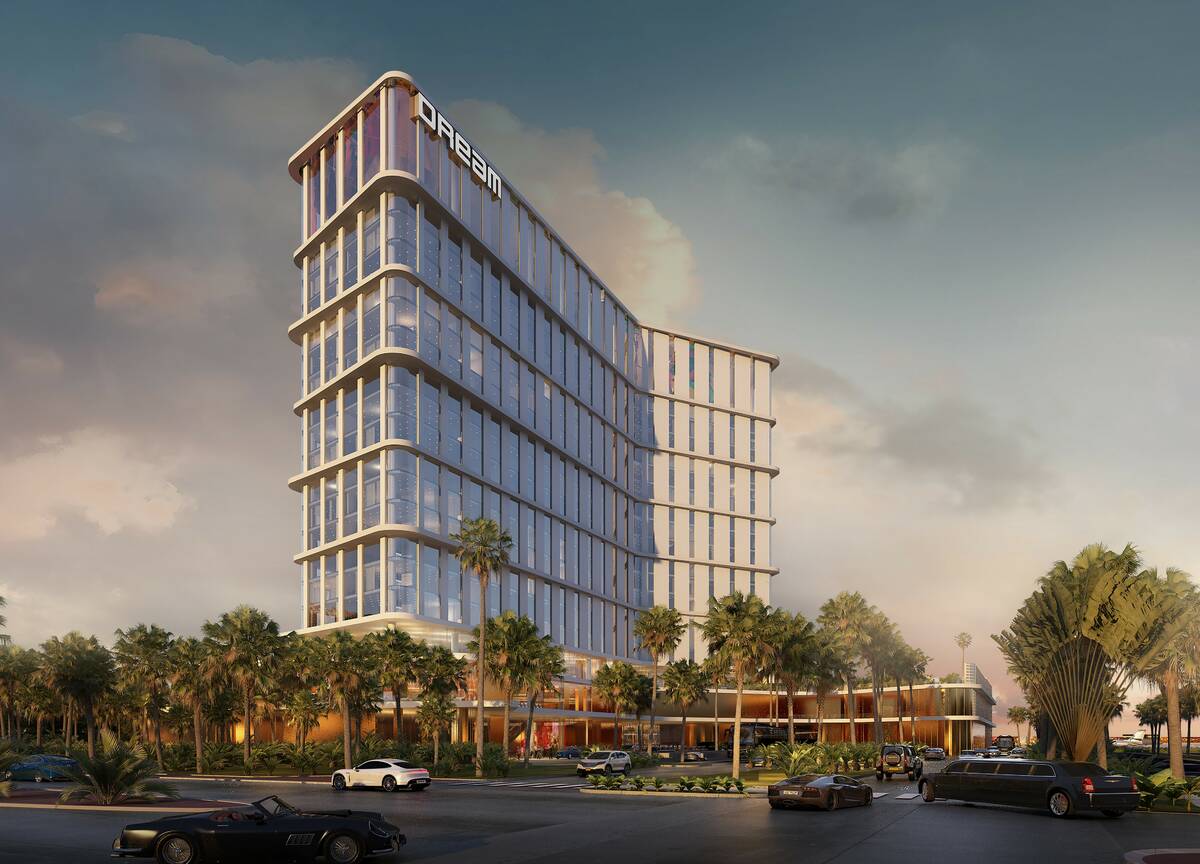 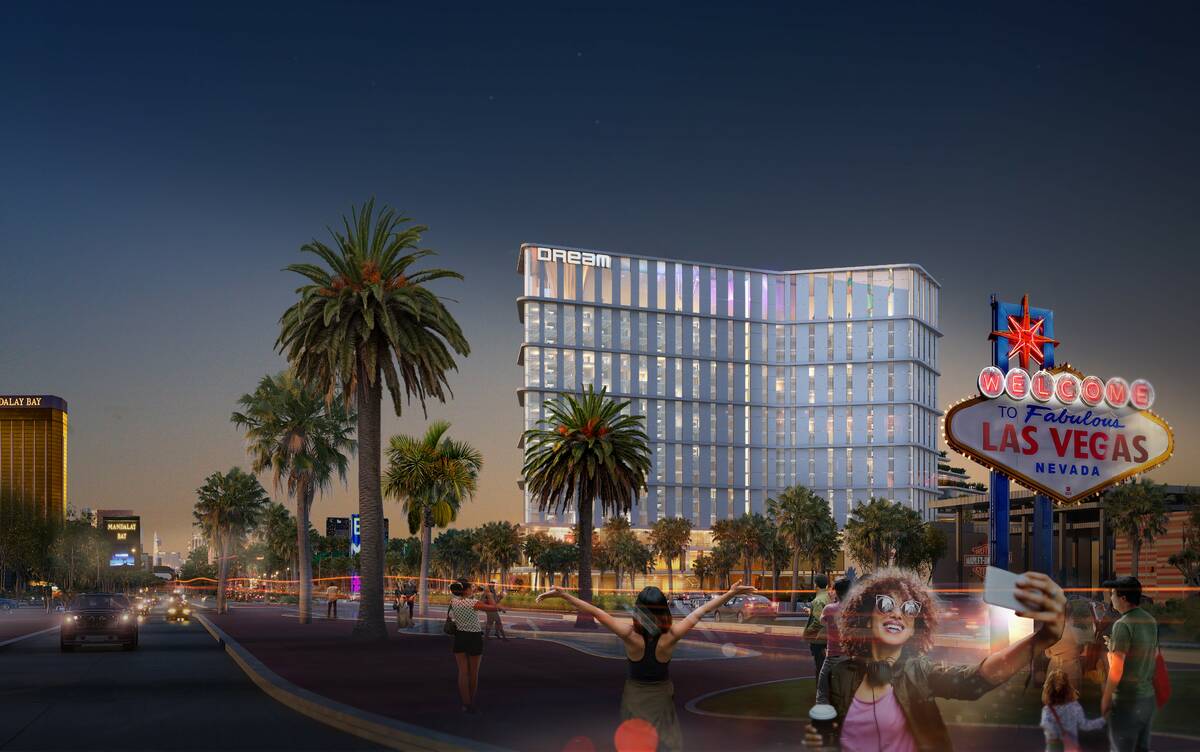 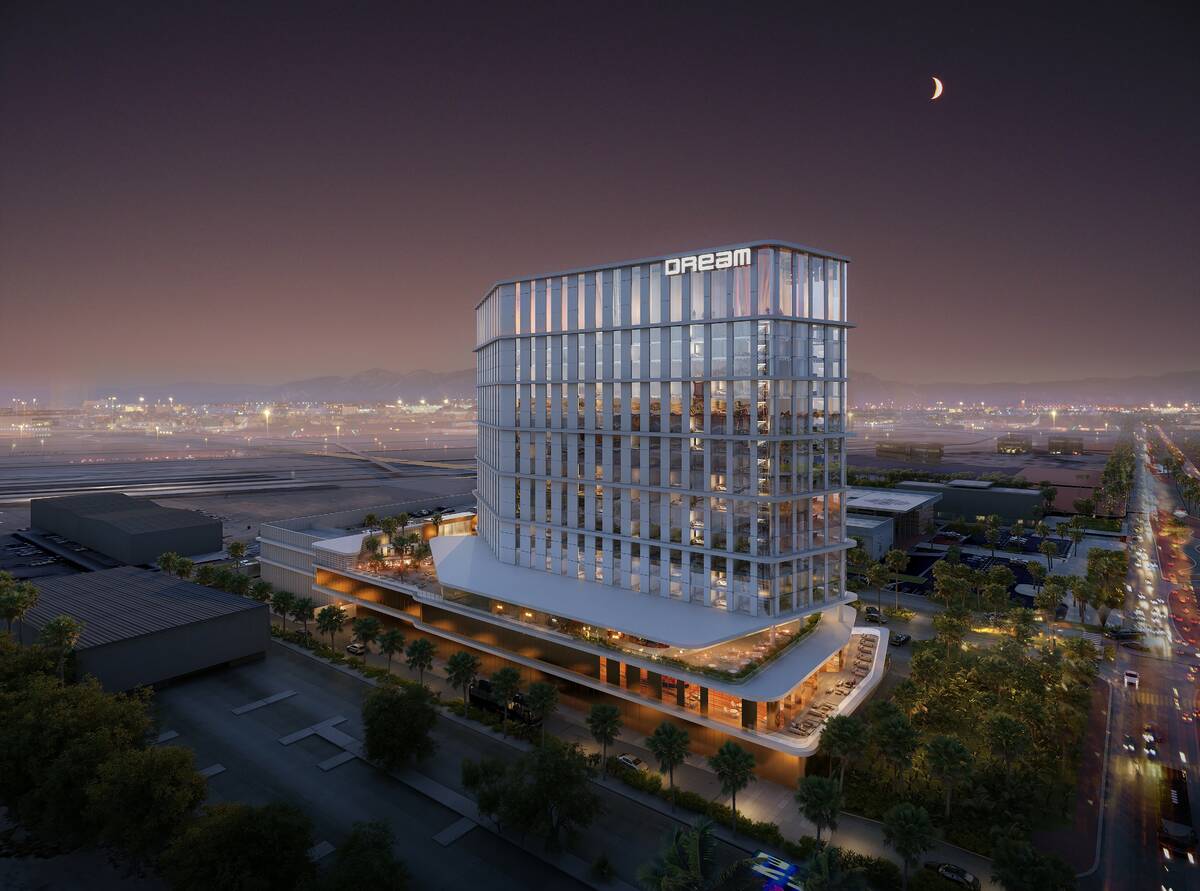 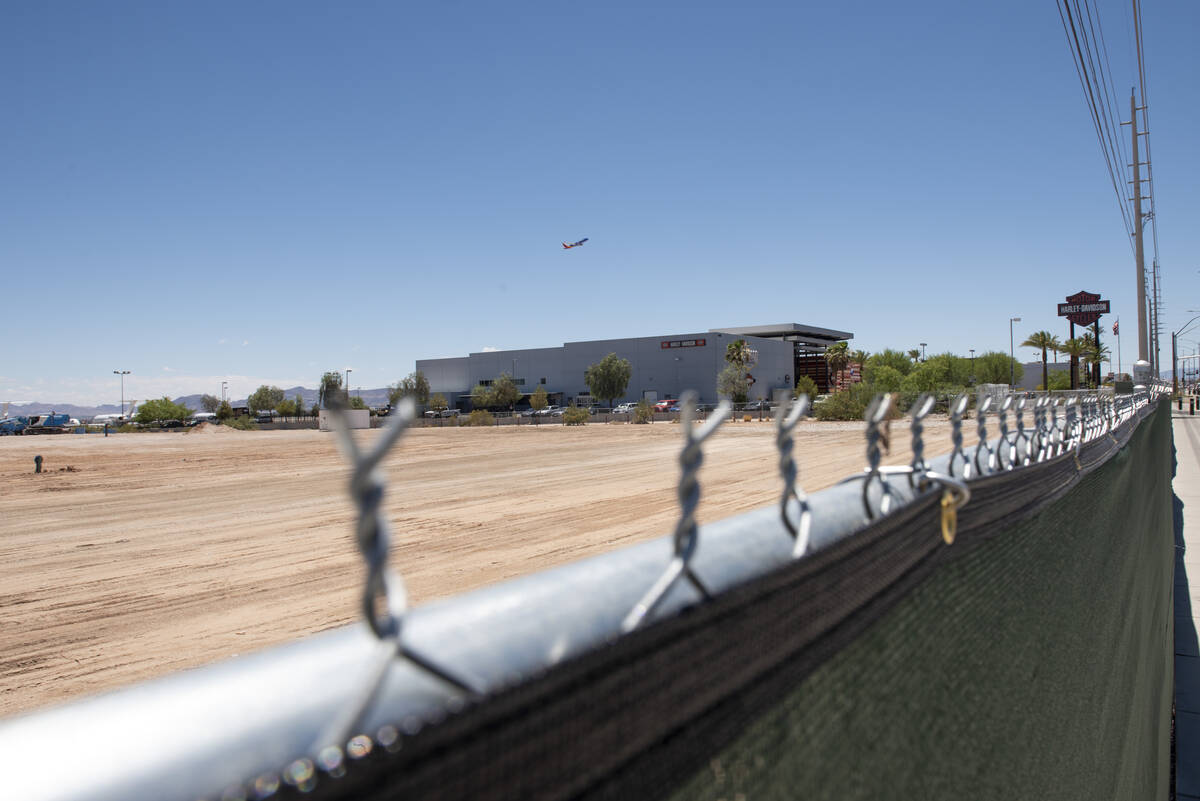 A plane takes off, behind the plot of land on the southern end of the Strip where the Dream Las Vegas hotel-casino will be built, on Friday, July 1, 2022, in Las Vegas. (Steel Brooks/Las Vegas Review-Journal) 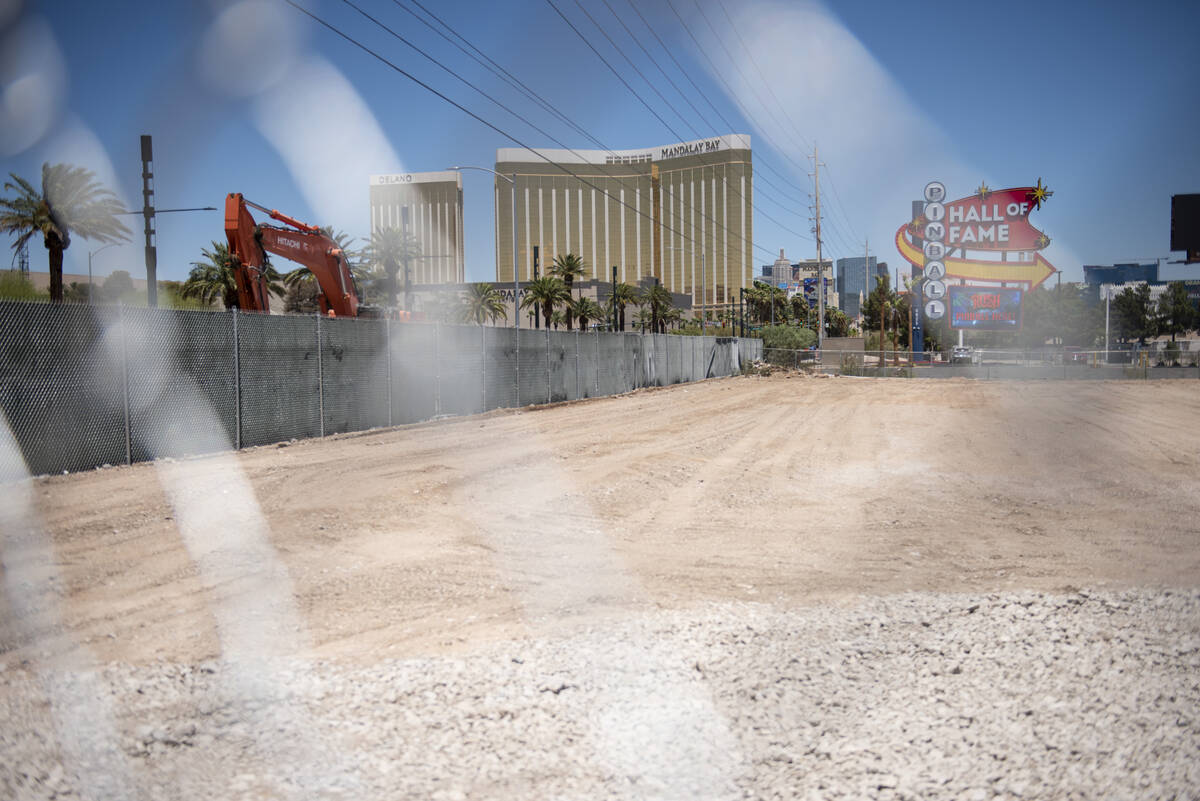 Mandalay Bay hotel-casino and the Pinball Hall of Fame are seen behind plot of land on the southern end of the Strip where the Dream Las Vegas hotel-casino will be built, on Friday, July 1, 2022, in Las Vegas. (Steel Brooks/Las Vegas Review-Journal) 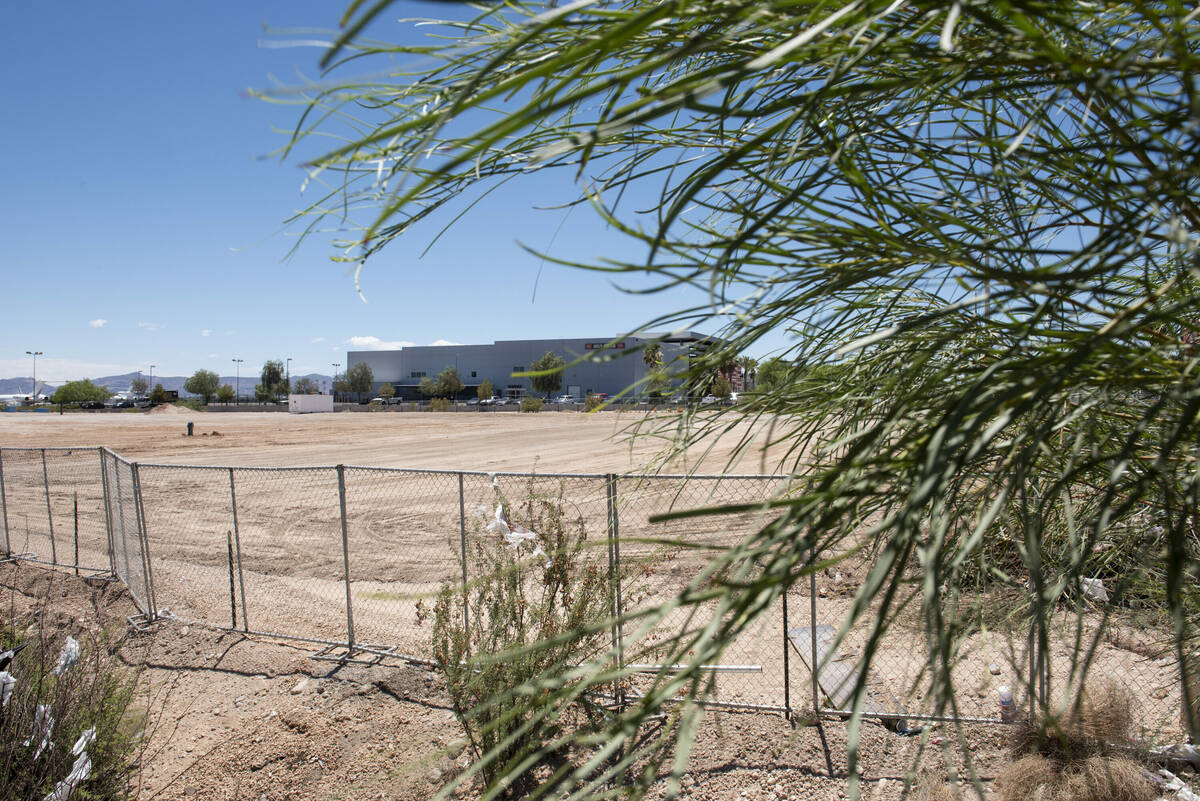 The plot of land on the southern end of the Strip where the Dream Las Vegas hotel-casino will be built, seen here on Friday, July 1, 2022, in Las Vegas. (Steel Brooks/Las Vegas Review-Journal) 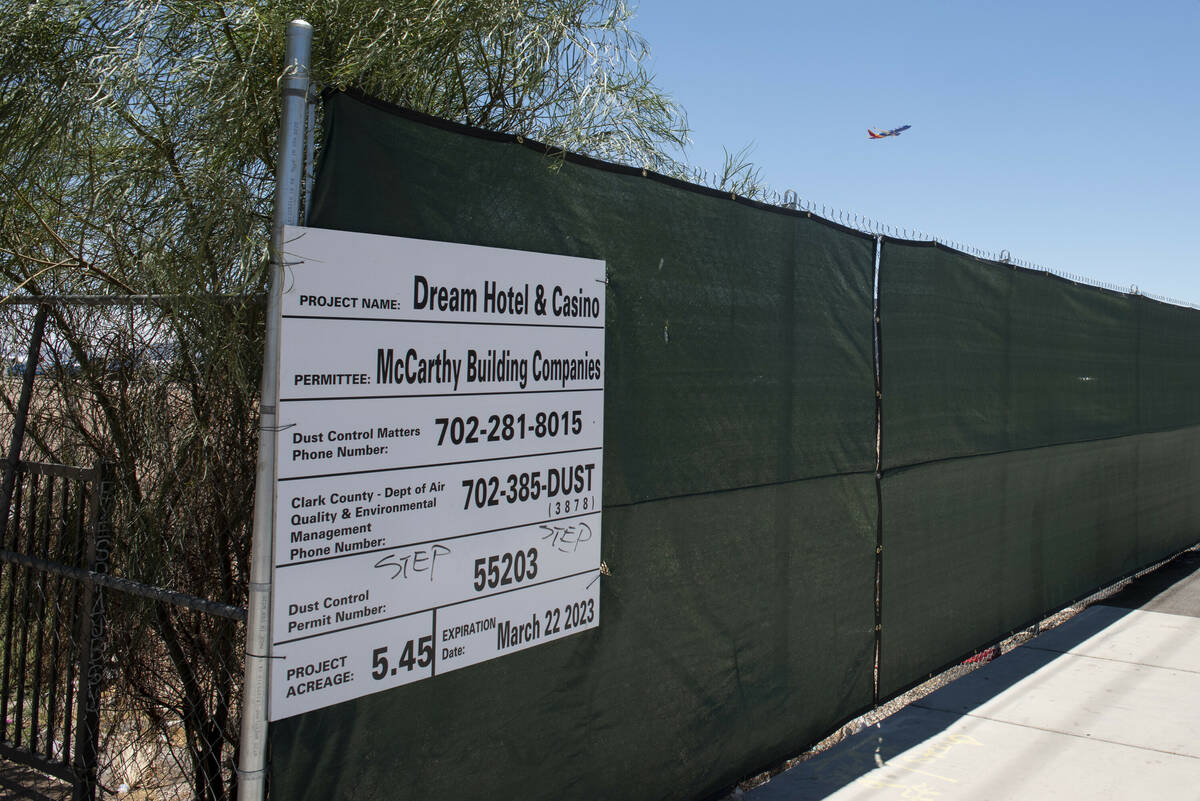 A plane takes off, behind the plot of land on the southern end of the Strip where the Dream Las Vegas hotel-casino will be built, on Friday, July 1, 2022, in Las Vegas. (Steel Brooks/Las Vegas Review-Journal)

The south edge of the Strip is set to get a new hotel.

Developers of Dream Las Vegas are scheduled to hold a ceremonial groundbreaking Friday for the 531-room casino-resort on Las Vegas Boulevard just south of Russell Road. The project, estimated to cost around $550 million, is slated to feature restaurants, nightlife, a third-level pool deck and meeting and event space.

Dream, which is being developed by Southern California firms Shopoff Realty Investments and Contour, would be much smaller than the megaresorts that line Las Vegas Boulevard. It would offer a boutique-style experience in an ultra-competitive market dominated by hotels that often have thousands of rooms, huge casino floors and a lengthy list of restaurants, clubs and other amenities.

Located next to Las Vegas’ airport, the project also previously faced such concerns as possible illegal drone flying, laser lights and even bombs hidden in garbage trucks, prompting a series of design changes.

Bill Smith, senior vice president of design and construction at Shopoff, told the Review-Journal that the resort will be the flagship property for operator Dream Hotel Group of New York City, which boasts Dream-branded locations in Manhattan, Miami Beach, Nashville, Hollywood and Bangkok and several more in the pipeline.

The roughly 5-acre project site, between the Pinball Hall of Fame arcade and a Harley-Davidson motorcycle dealership, is about a mile from Allegiant Stadium.

It’s also near the iconic “Welcome to Fabulous Las Vegas” sign, a popular attraction where photo-snapping tourists would capture Dream in the background of their shots, Smith pointed out.

Construction is set to get underway as visitor totals in Las Vegas continue to bounce back from the devastating drop-off of 2020 when the pandemic hit and as Nevada casinos rake in more than $1 billion a month in gambling revenue.

At the same time, people also are paying more for gas and other goods, and there are fears of a possible recession as the Federal Reserve takes steps to cool inflation.

Smith noted that Dream will be under construction for the next few years and that America’s casino capital keeps expanding its entertainment offerings, especially, lately, with pro sports teams.

‘Throw things over the fence’

Shopoff and Contour announced plans for Dream in February 2020, saying they planned to break ground in early 2021. The next month, the coronavirus outbreak shut off much of Las Vegas’ economy, turning the Strip into a once-unthinkable ghost town of shuttered resorts.

Dream, meanwhile, eventually faced opposition because of its location next to Harry Reid International Airport property.

As outlined in Clark County documents last year, the proposal raised “safety and security concerns” about airport operations, and project plans were sent to several agencies including the FBI, the Department of Homeland Security and the Secret Service.

The Transportation Security Administration issued an assessment stating the project was near an area of the airport “used for high-level individuals, special operations and military aircraft parking,” and the resort “would increase risk to both the aircraft and the passengers due to active shooters and the ability to throw things over the fence intended to cause harm” to people and planes, county documents show.

The TSA also said the hotel’s proposed service road would make its border with the airport “more susceptible to Vehicle Borne Improvised Explosive Device attacks delivered by vendor or garbage truck,” and that open areas planned for the third and ninth floors “provide a direct line of sight for laser flashing and long gun attacks” against aircraft and the airport, county documents stated.

Major airlines such as Southwest, Delta, American, and United all raised concerns about the project, citing such issues as illegal drone activity, lasers, and lighting and billboards that “could potentially be a source of flash blindness.”

Dream’s porte-cochere was moved, letting the developers shift the tower away from the airport property line and toward Las Vegas Boulevard, and its border with the airport would feature a 9-foot tall, double-reinforced security wall with guard rails and wrought-iron fencing, he said.

A security checkpoint would allow only authorized vehicles onto the service road that rings the property, and grates or spikes would be installed on the other side of the building to prevent drivers from avoiding that checked entry, according to Celeste.

Sightlines to the airport were “dramatically reduced”; the hotel’s now-lone pool deck would have a “decorative” 10-foot security wall; all of the guest-room balconies were scrapped; and each room would have a “glass-break detector system” that would alert security if anyone tampered with the windows, Celeste said.

The gunman who attacked the Route 91 Harvest festival on Oct. 1, 2017, killing 60 people and injuring hundreds more, broke through windows on the 32nd floor of Mandalay Bay to take aim at the open-air concert grounds on the south Strip. He also fired several rounds at airport fuel tanks.

Commissioner Ross Miller — who during the hearing said the “first threshold question” is whether county leaders should “allow for casino-hotels directly on top of our airport” — cast the lone “no” vote.

At the time, Shopoff founder Bill Shopoff told the Review-Journal that the developers would probably spend more than $10 million on physical changes to the project that stemmed directly from the concerns and opposition they faced.