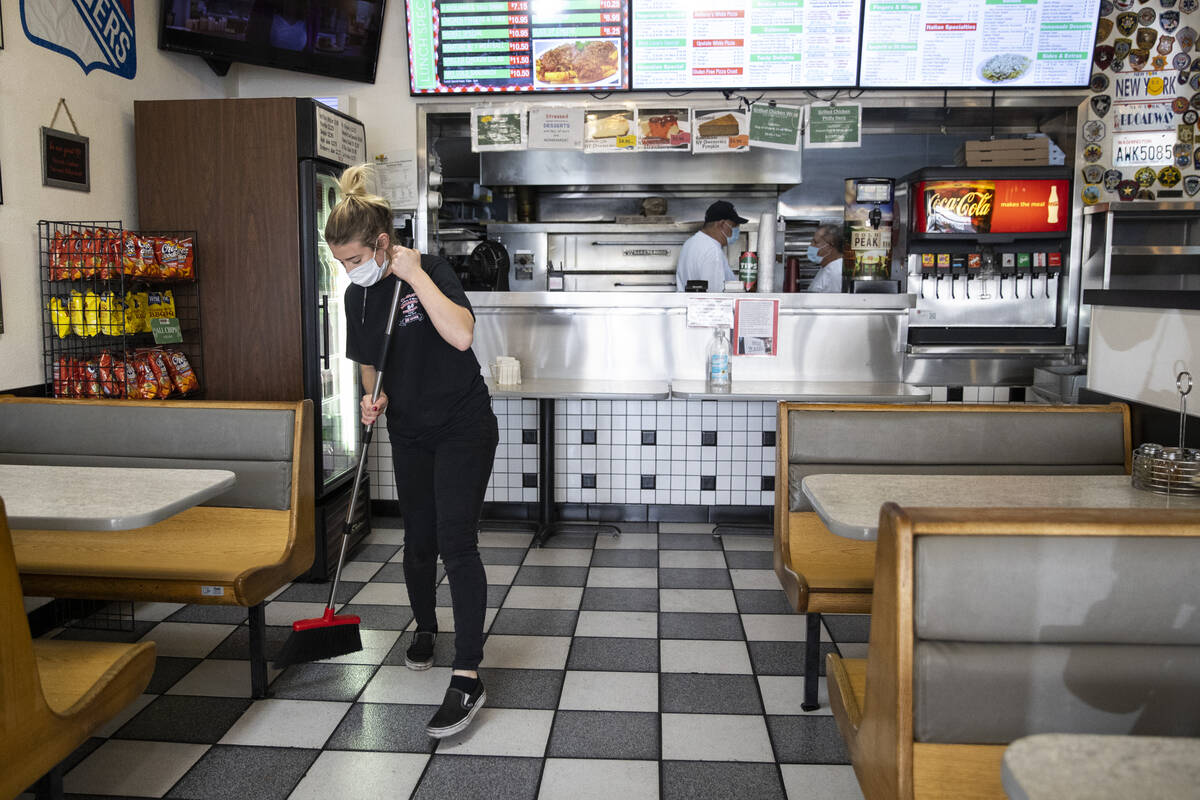 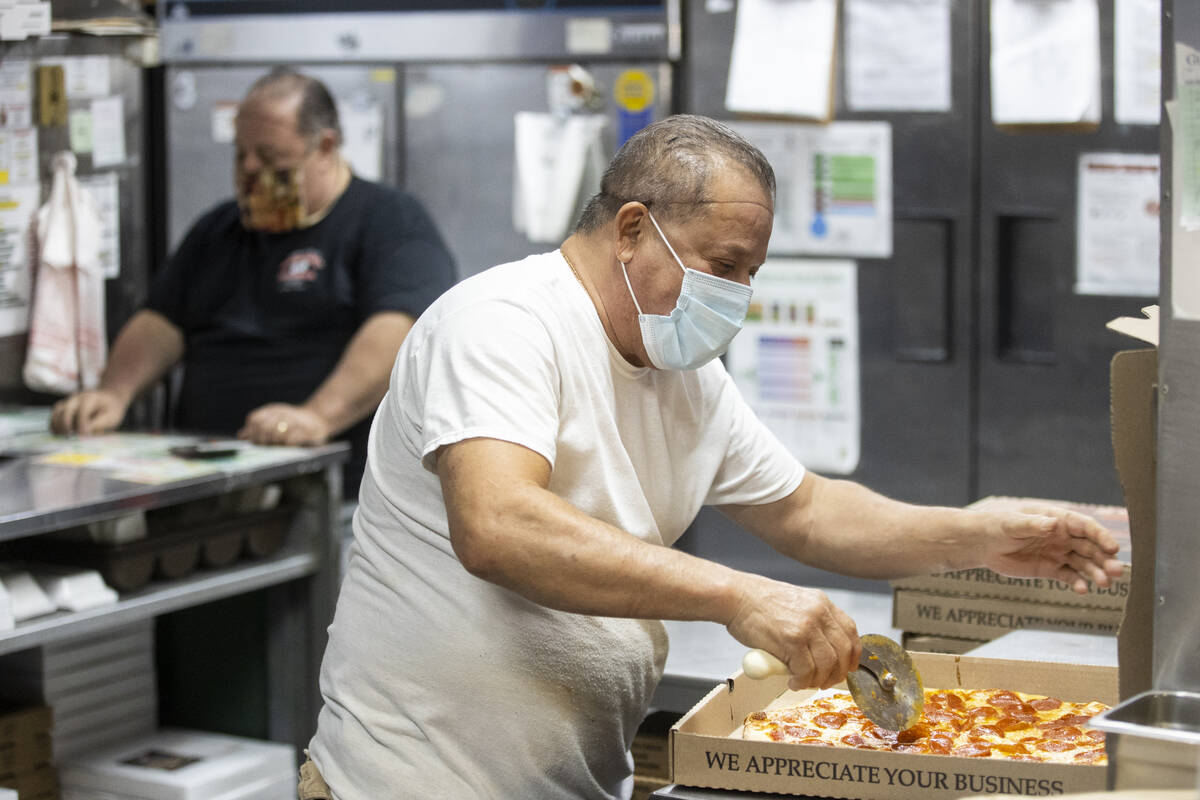 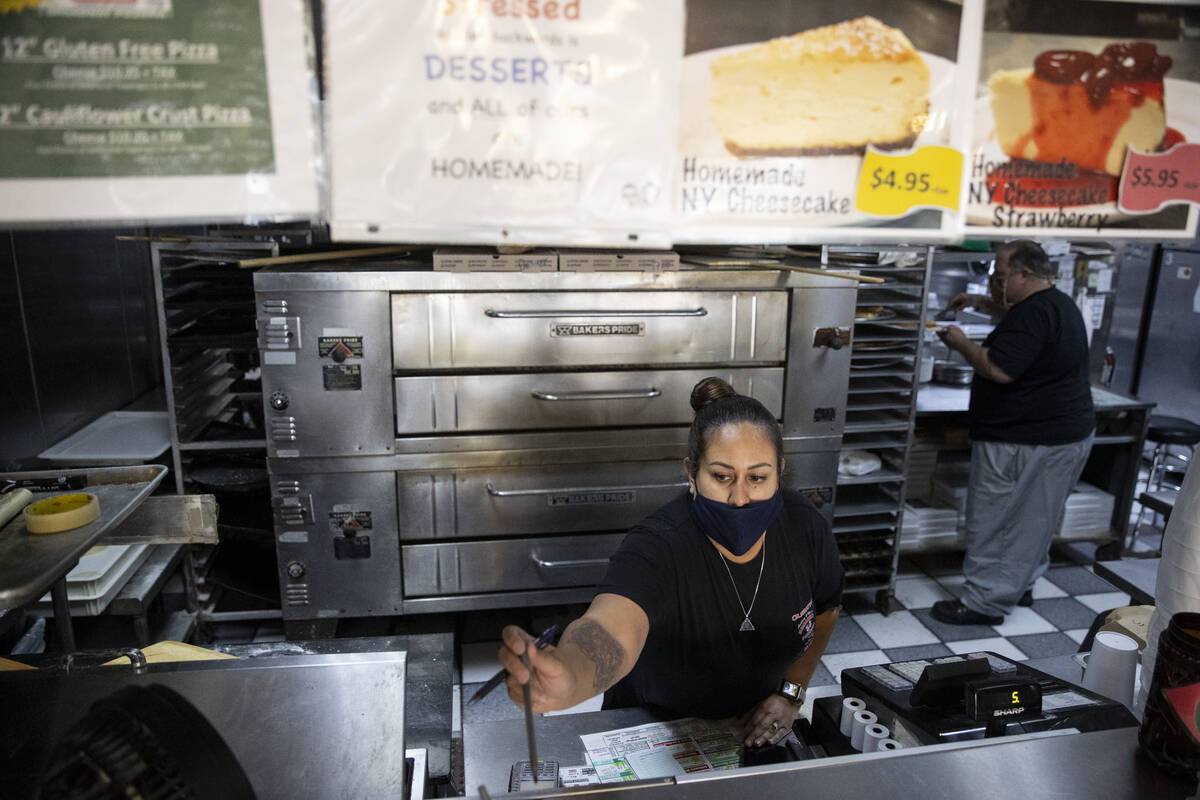 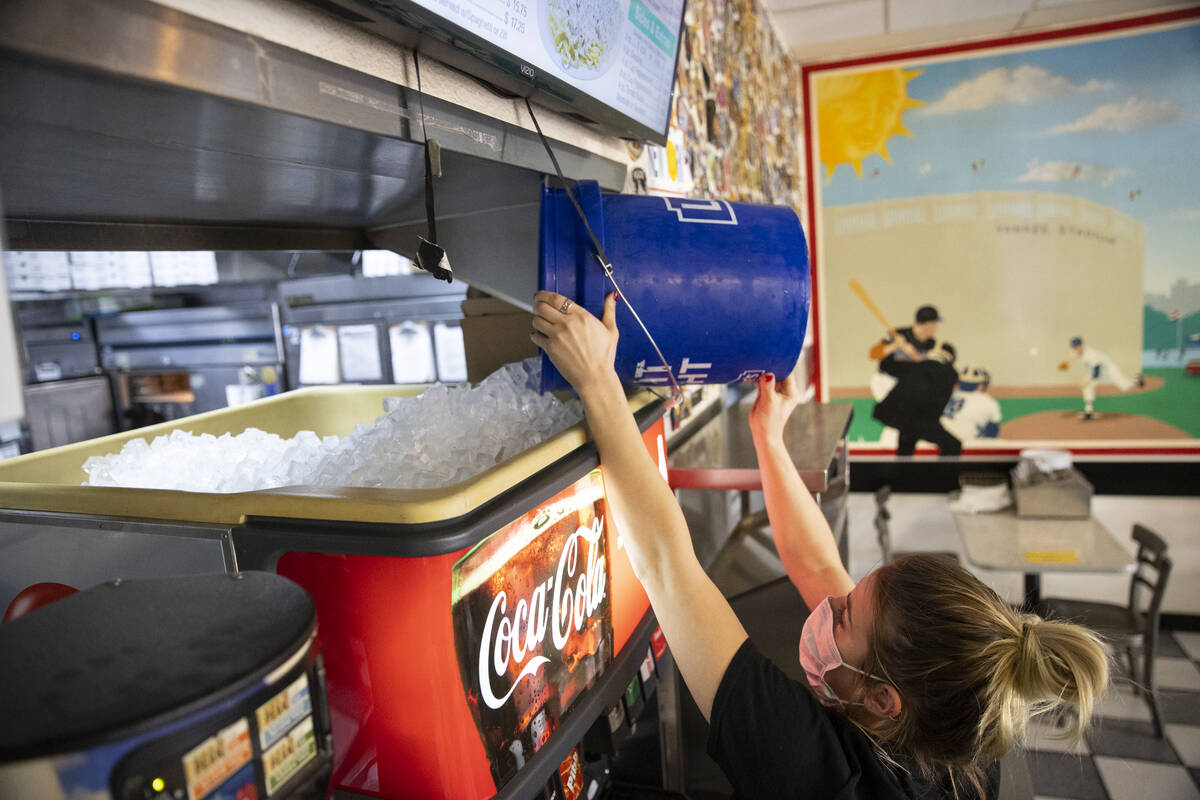 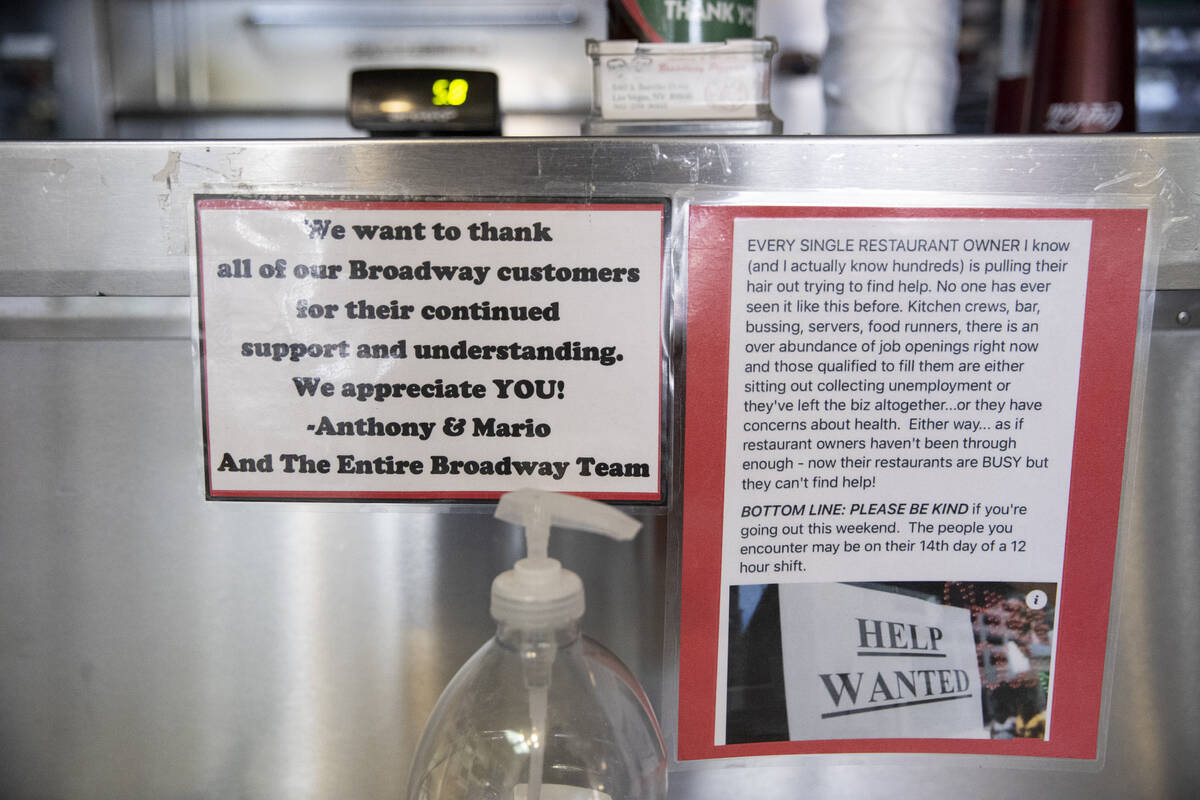 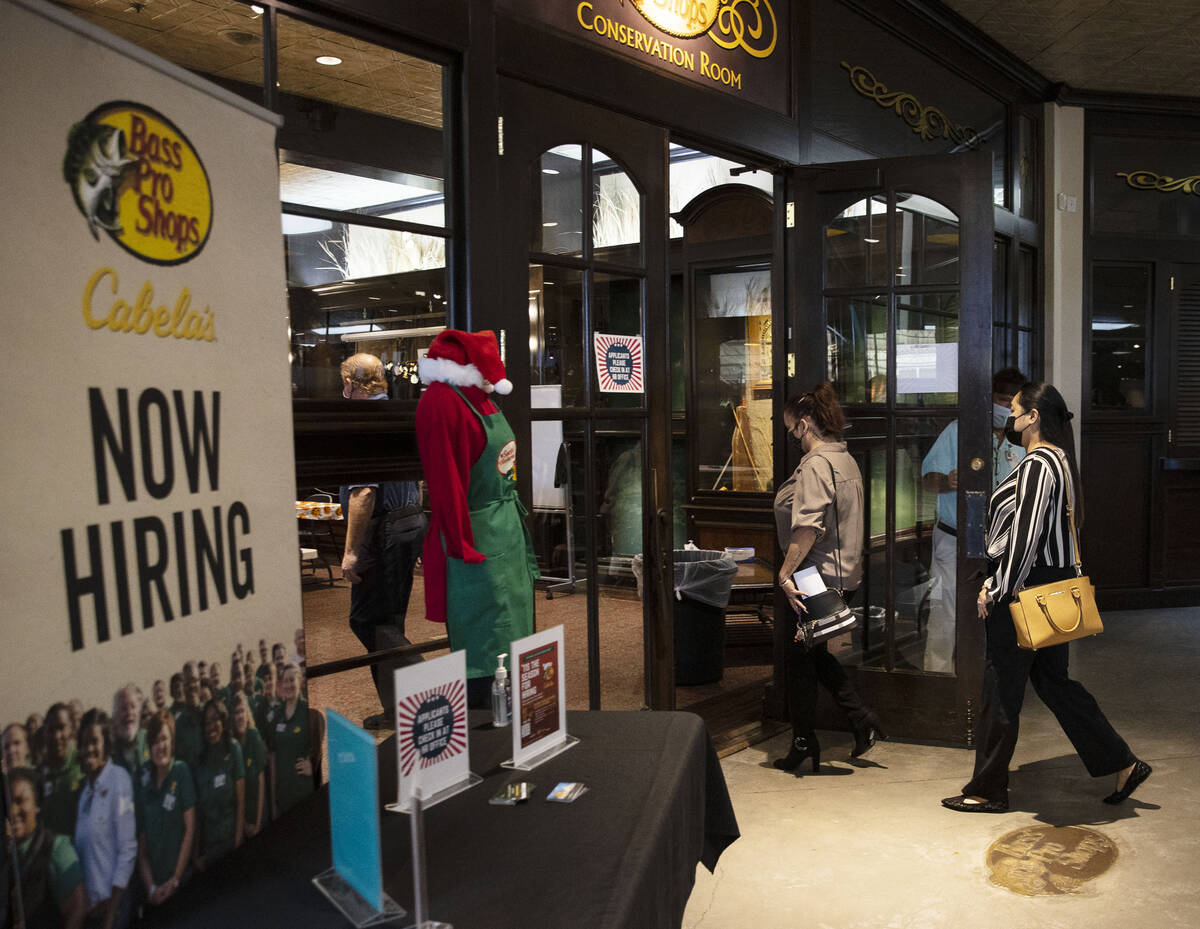 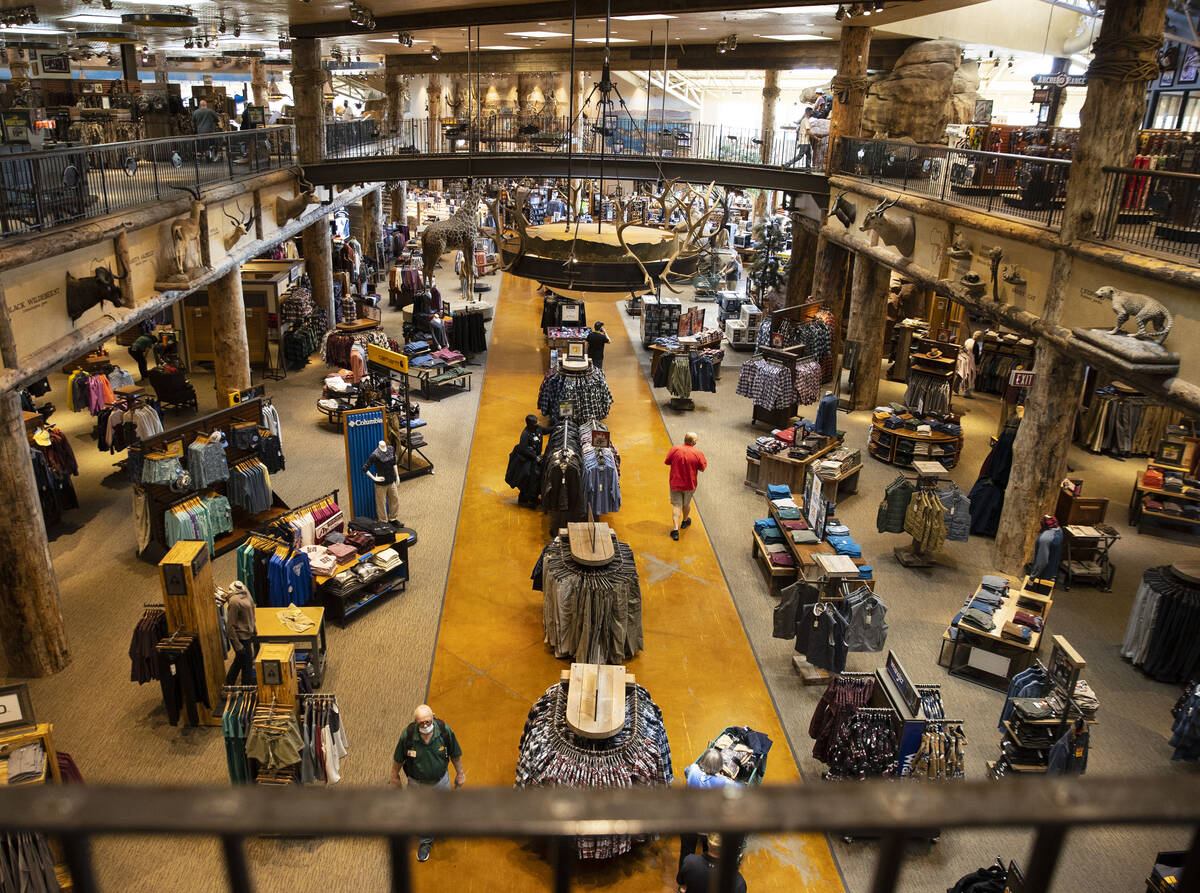 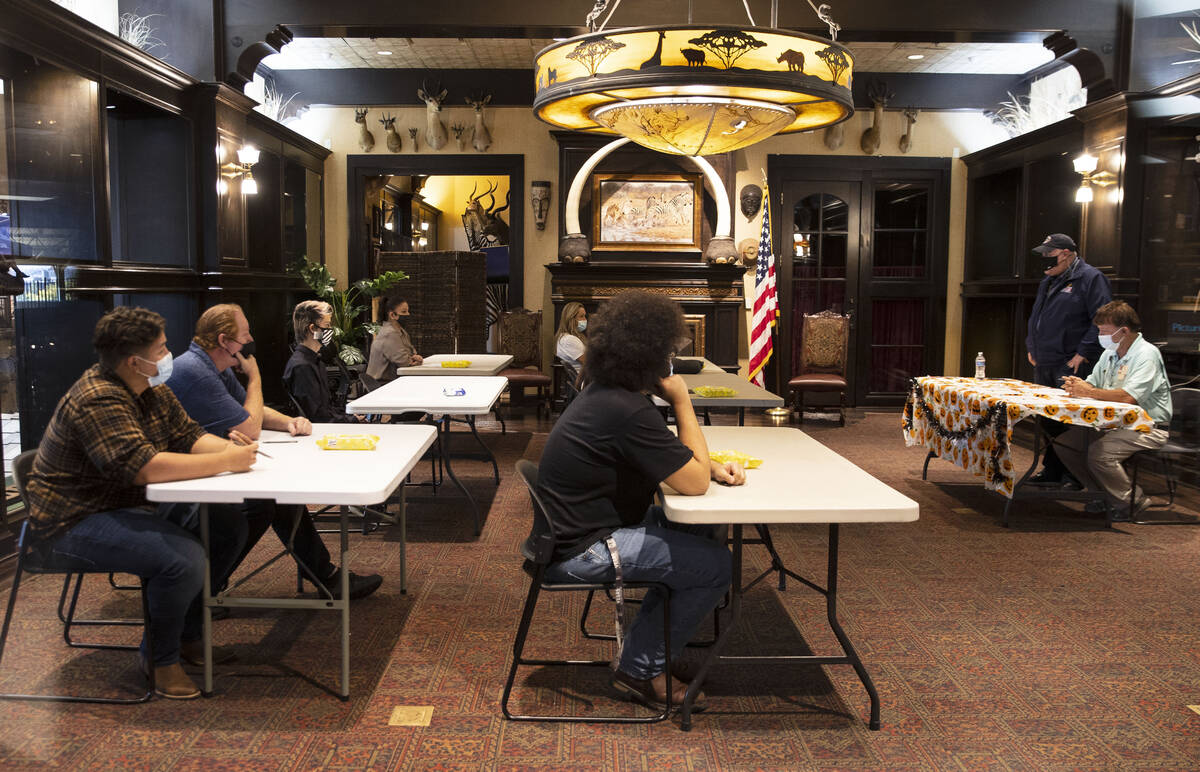 Job seekers wait to be called for an interview at a Bass Pro Shop job fair, on Thursday, Oct. 14, 2021, in Las Vegas. The store is hoping to hire 54 people for the holidays. (Bizuayehu Tesfaye/Las Vegas Review-Journal) @bizutesfaye 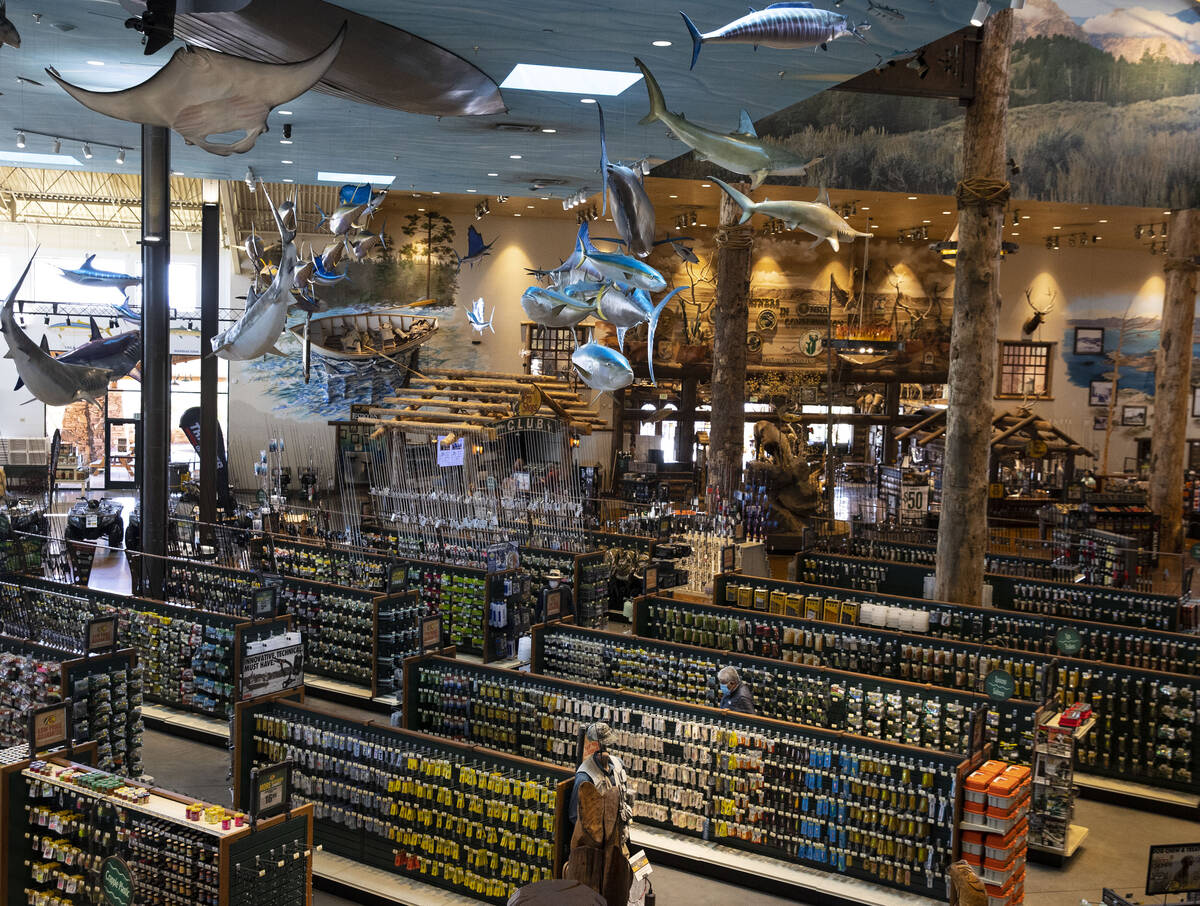 Bass Pro Shop is shown, on Thursday, Oct. 14, 2021, in Las Vegas. The store is hoping to hire 54 people for the holidays. (Bizuayehu Tesfaye/Las Vegas Review-Journal) @bizutesfaye 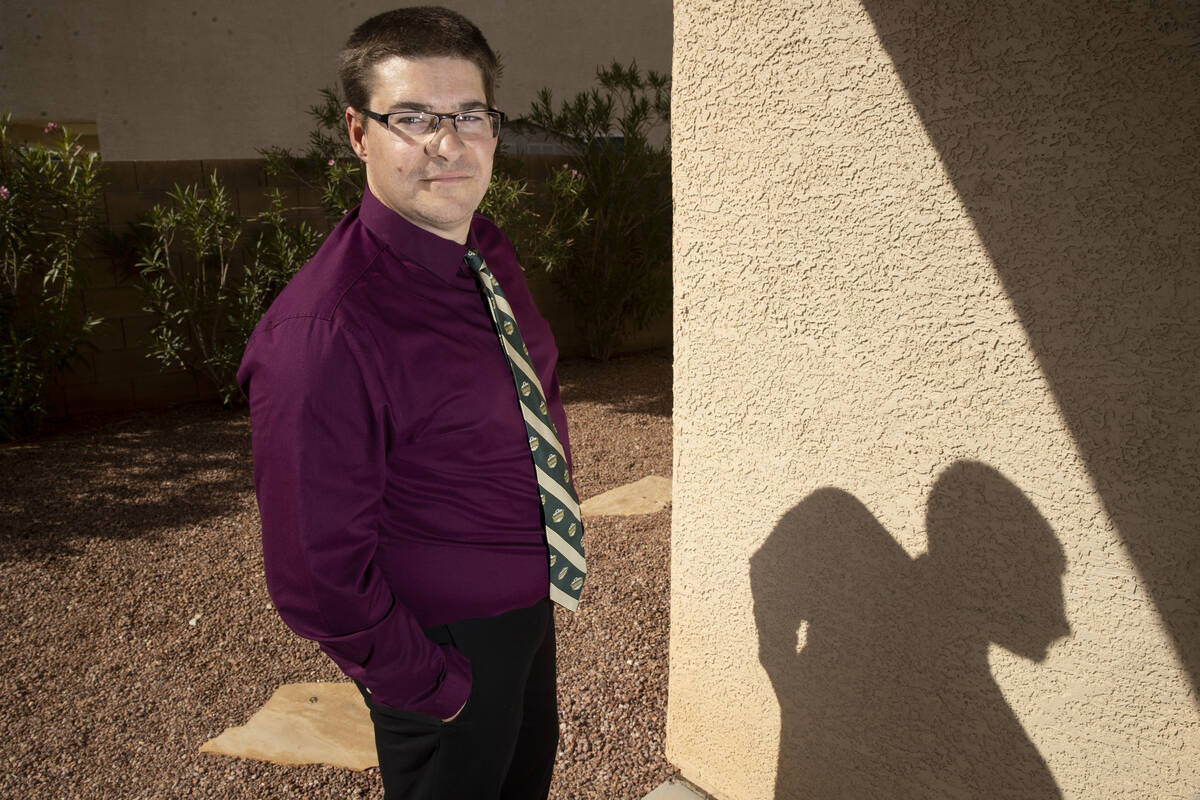 Chris Astrella, who applied for jobs in Las Vegas for ten months, poses for a portrait at his home in Henderson, Wednesday, Oct. 20, 2021. (Erik Verduzco / Las Vegas Review-Journal) @Erik_Verduzco

He increased the hourly wage to $15 per hour but suspects he can’t keep up with what other large restaurants and resorts are offering amid a national labor shortage.

“Anywhere you go, any of these places, everyone’s in the same boat,” Rossi said. “We’re essential workers. We’ve been doing this, working straight through the pandemic. Nobody got a break, no one sat at home. It’s tough (to hire and retain) for that reason.”

Getting enough workers on the clock is a problem across the country. From the need for drivers to take products to their final destinations on time to delays over the summer in certification of schoolteachers in the Clark County School District, few businesses or occupations have been spared. Consumers see the effects of fewer people on the job across supply chains and industries every day.

The challenge for hospitality and food service was apparent to Rossi when an assistant manager candidate pre-screened over the phone but stopped responding after he visited the pizzeria before a formal interview.

“I never got a chance to meet him in person,” Rossi said. “I contacted him afterwards through email. He says, ‘I just thought it was too small.’ In other words, he probably doesn’t think we have the means to pay him well. I didn’t even get to that point. We’re here 25 years — we’re busy. I wouldn’t offer that position if I didn’t think I can take care of somebody.”

Nevada’s unemployment rate was the highest in the nation in August and July and tied for highest in September. September’s rate dipped slightly from 7.7 percent to 7.5 percent, the most recently available data. State economists say some of that decline is expected from workers leaving the labor market altogether.

“A lot of what we’re seeing is that people are really reassessing their priorities as it involves work,” UNLV labor economist Jeff Waddoups said. “It’s not just around, ‘Do I want to work or not?’ The pandemic allowed people to step back and say, ‘Is it really worth it for me to work now?’”

September’s job growth was modest. State data show that Nevada added 4,400 jobs, 2,400 of those in the Las Vegas area. That’s a 0.2 percent increase since August — something the state said is a more typical pace of employment growth after the peak rates in June.

The trends reflect similar nationwide data, in which some businesses and experts expected to see more significant growth last month after the additional federal unemployment benefits were discontinued. Other national data, however, showed that 4.3 million workers quit their jobs in August, the latest available month of data. That suggests there are enough available opportunities that workers feel comfortable enough to quit, Waddoups said.

The hiring challenges are hardly exclusive to this summer and fall. At a recent seasonal job fair for Bass Pro Shops, officials said it’s been hard to get applicants in the store and hard to retain them since the beginning of the pandemic.

“A few years ago, we’d been able to get almost double the amount of applicants for this type of event,” Hendrick said. “Now we’re definitely seeing a decrease.”

The current labor market conditions are leading some to believe that people’s priorities surrounding work are evolving to go beyond simply what job pays the best, Waddoups said.

“A lot of us thought there would be a return of workers once the benefits were discontinued. And I think what that means is we don’t understand workers well enough,” Waddoups said. “I think maybe we just overestimate how important money is.

“I look back at all the classes I’ve taught and how I talk about participation in the labor market and what drives it. I’ve said many times in the past that if you increase non-work income — that is, those benefits we’re talking about — you’re going to decrease participation. And then here I am, watching this, and what I’m observing is that we took away all those benefits and people didn’t go back to work. Maybe those business owners took my class.”

Job hunters say the rising costs of living in Las Vegas and increased need for flexibility weigh heavily in their search. North Las Vegas resident Samuel Mitchell said he’s turned to the gig economy through an app, Bacon, that connects temp workers to businesses offering shifts in industries like warehousing, restaurants, hospitality and more. The company says it has 6,000 workers in Las Vegas and saw increasing users on both sides of the market through the pandemic.

Mitchell started job searching in the beginning of the pandemic but turned to food delivery apps, when he couldn’t get hired for hourly work in the casinos. He stuck with gig work because it offered fast pay, flexible scheduling and variety in his day-to-day life, he said.

“Everywhere you hear it’s ‘jobs opening,’” Mitchell said. “But you don’t really see it, or you have to wait, go to the interview, then you got to get trained and you’re on this probation period. With Bacon, it’s totally different. You go to the job, you do the job, you get paid and you move on with the rest of your life.”

“The challenge is, though, if I’m working at the Vegas convention center or Allegiant Stadium or the Strip, I can’t do that job via Zoom,” said Meghani, whose app has had 42 percent user growth in 2021. “I need to be physically present. I think the Zoom equivalent for front line, hourly workers is the idea of flexibility. That by far, is what workers are telling us they want post-COVID.”

Mark Steele is the founder of the Residential Hospitality Institute, a hospitality training school and consultancy firm. He believes the pandemic’s rapid changes to capacity in restaurants and other regulations are still influence hiring abilities for the industry today.

“We live in Las Vegas, we’re the hospitality king, but I can challenge any business in the whole world that has gone through what hospitality has, and nobody can keep up with those occupancy and staffing levels (changing) just like that,” Steele said.

The pool of available restaurant talent has shrunk, too, he said. Some have left the hospitality industry, to start their own businesses, to avoid COVID-19 exposure or to change careers, or to take care of their family. Others may have landed jobs at one of three new resorts — Circa, Virgin Hotels Las Vegas and Resorts World — that opened since the pandemic’s onset.

Still others feel a disconnect between businesses and job seekers. Despite frequent hiring fairs at employers across Clark County, some feel it’s difficult to get a job — or at least, one that makes the most sense for them.

The pinch goes beyond front-line work. Henderson resident Chris Astrella began applying to government, nonprofit and teaching jobs in January to prepare for his impending move from Wisconsin to the valley. He graduated with a master’s degree in public administration in the spring and arrived in September.

Astrella felt frustrated that it took months of applications to get a job offer, with his first arriving the third week of October. He said he did not even receive replies from half of the employers to which he applied.

“I stopped counting at 50 (job applications),” he said. “I went back to school to get my master’s for a reason: to better myself to open up more doors. And as late as last week, it didn’t seem like any of those doors were opening.”

Despite the influx of job postings, experts say it’s important to note that appropriate qualifications matter.

“We talk about high level numbers a lot: this many jobs created, this level of unemployment and whatnot,” said David Schmidt, chief economist at the Nevada Department of Employment, Training and Rehabilitation. “But ultimately, all of those big numbers are really made up of lots and lots of individual people with their own unique circumstances: history, background, skills and abilities. The jobs that people might be trying to fill and the skills, qualifications and abilities that people have don’t always line up.”