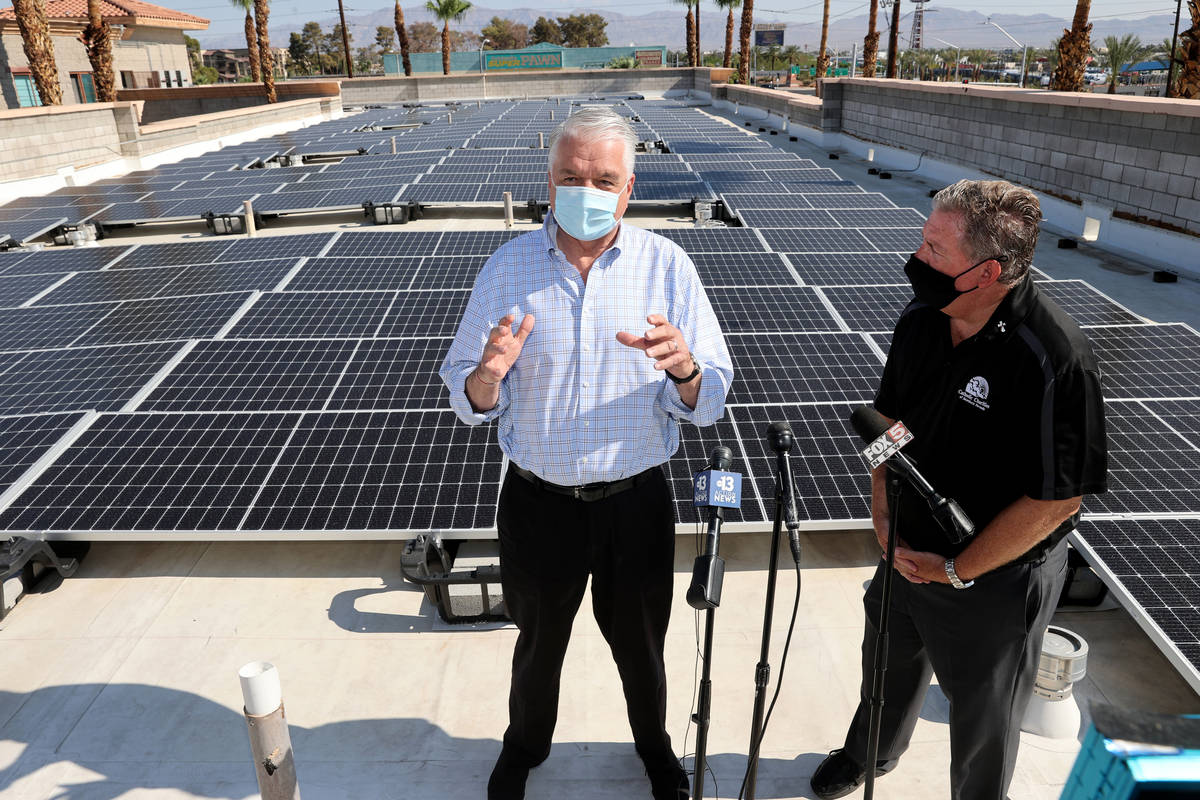 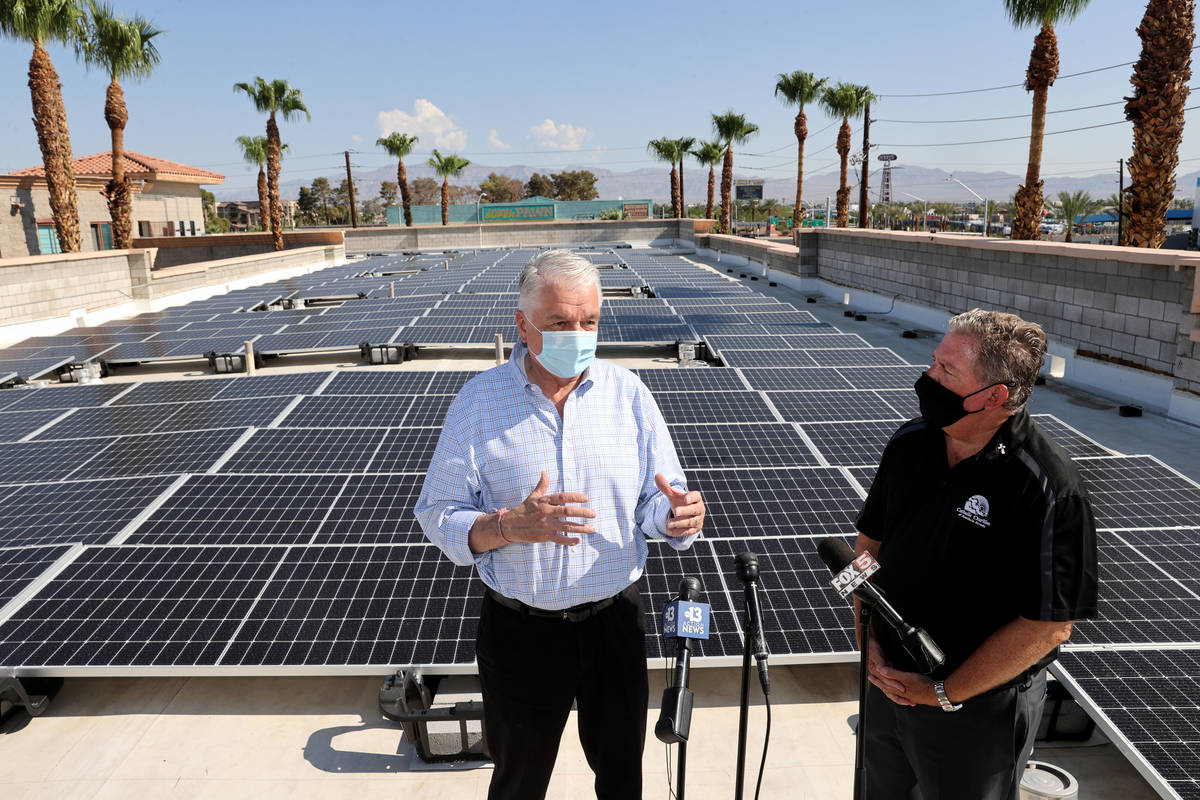 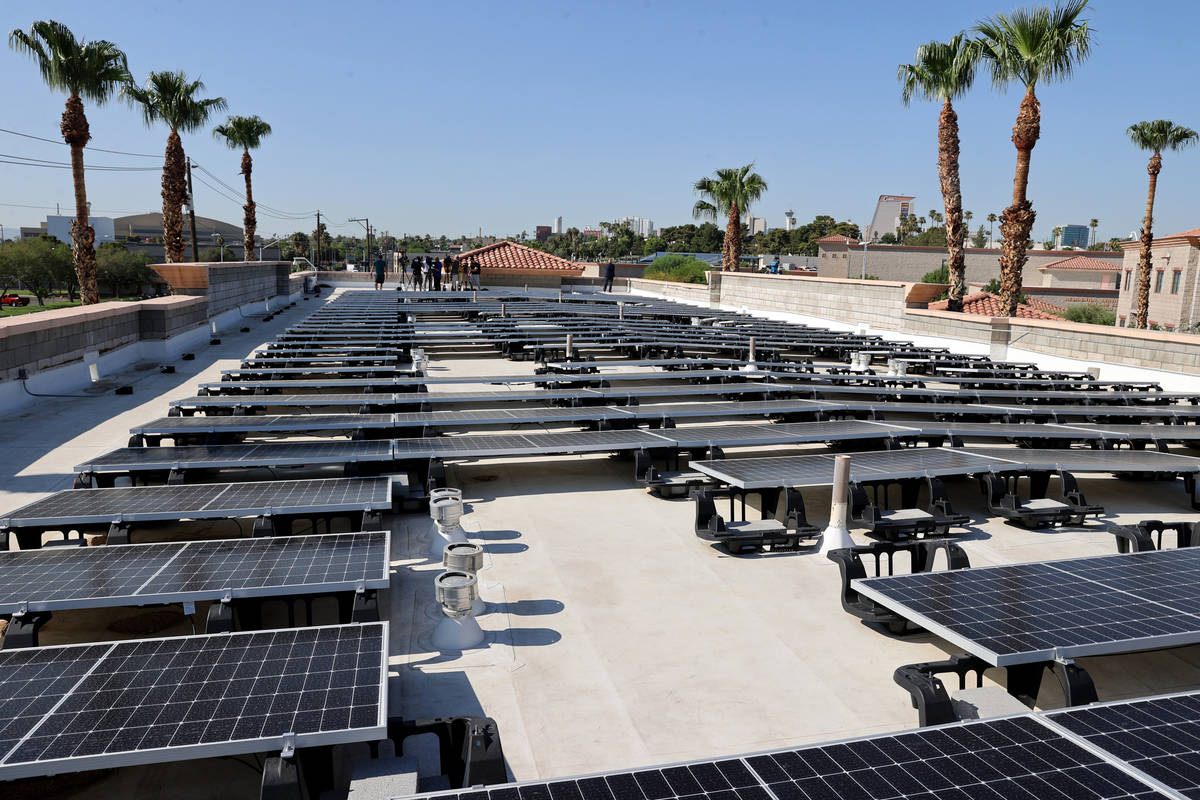 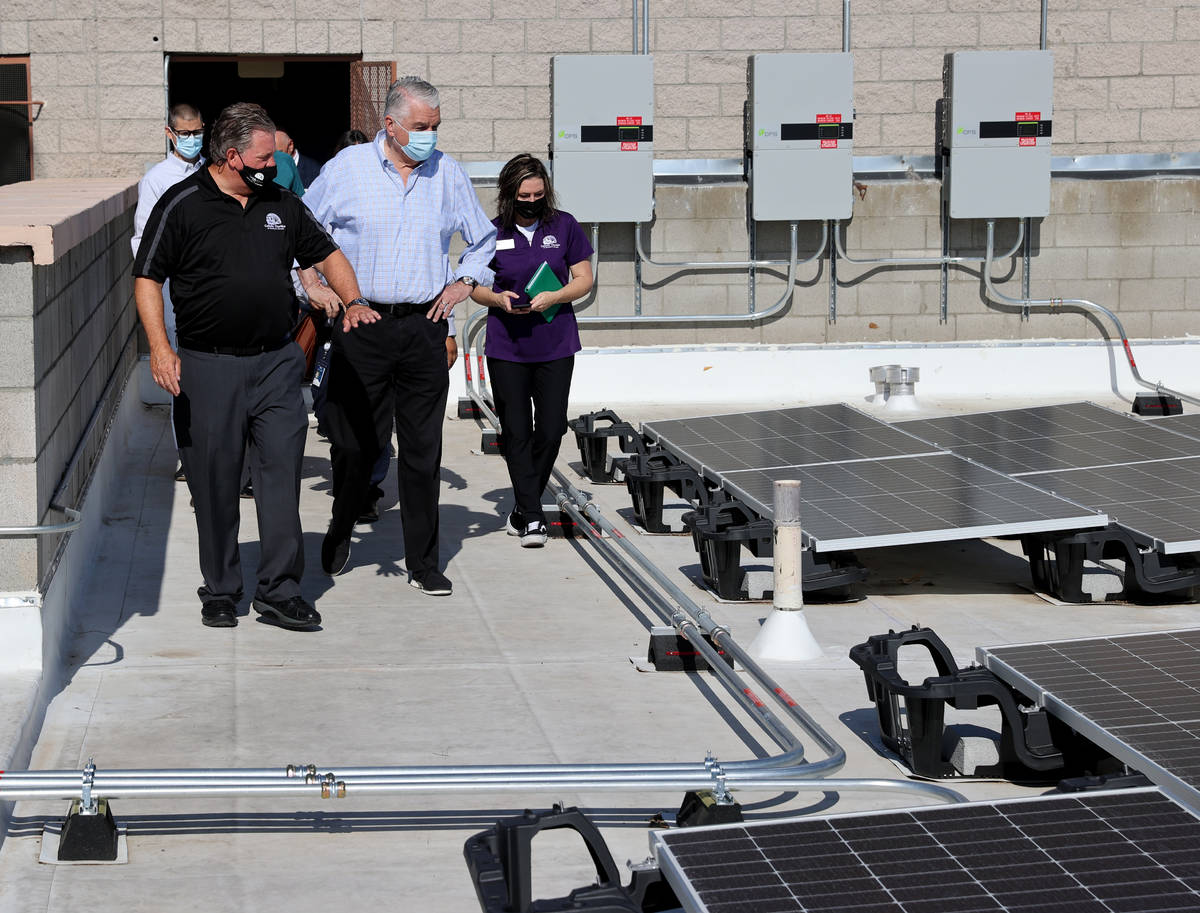 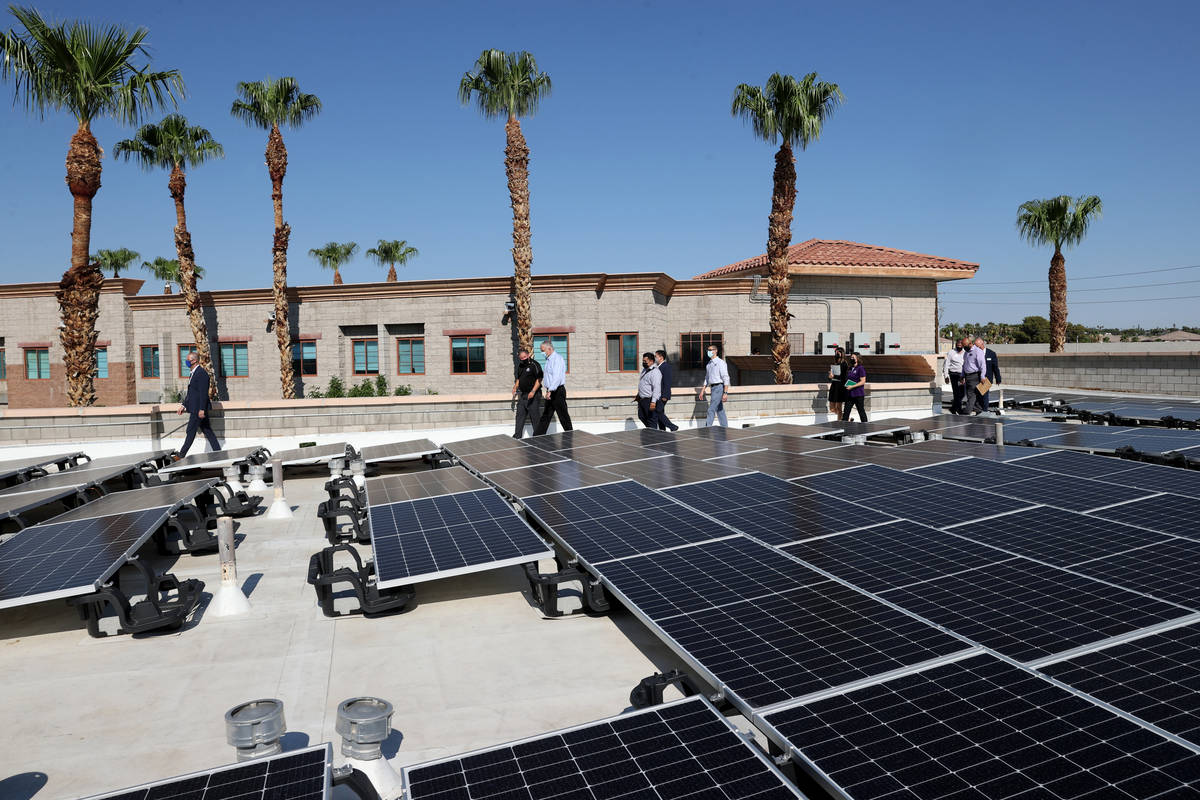 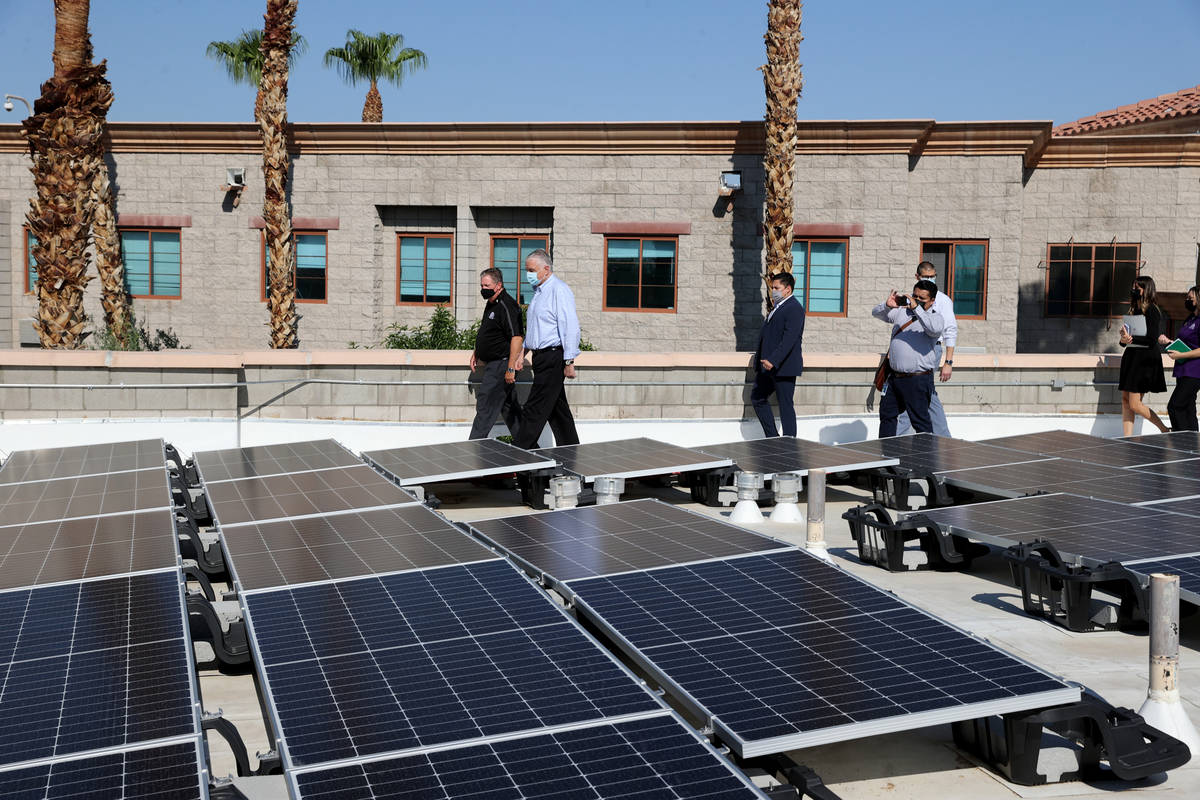 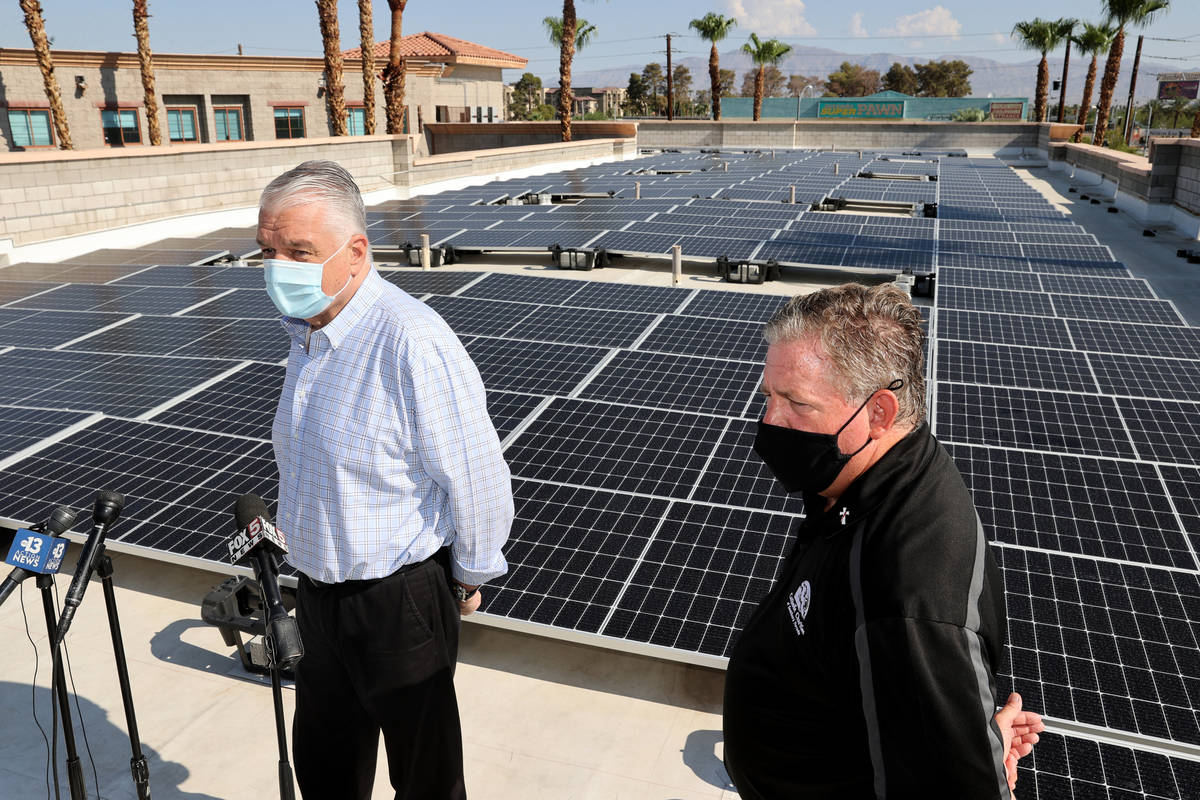 A 550-kilowatt rooftop solar array project is set to power services across the Catholic Charities of Southern Nevada campus later this year.

Catholic Charities believes it’s one of the first nonprofits in Nevada to have a solar project of that scale. Nearly a third of the 7-acre campus’ energy needs will be powered by the panels when complete.

Gov. Steve Sisolak toured the project’s most completed section, on the St. Vincent Apartments’ rooftop, at the corner of Owens Avenue and Las Vegas Boulevard North, on Monday morning.

“I think it’s a step forward, what they’re doing in terms of protecting the environment as well as protecting our vulnerable residents,” he said. “Hopefully this will be an example for other nonprofits to follow.”

The multiservice agency received two grants through NV Energy and the Nevada Governor’s Office of Energy’s lower income solar energy program, or LISEP. The $2 million solar project, developed by Catholic Energies, is part of a larger, $15 million infrastructure project at Catholic Charities. It includes updates to lighting fixtures and roofs, a “facelift” at the St. Vincent Lied dining facility and more.

The solar portion is expected to be completed in the next two months, Deacon Tom Roberts, the agency’s CEO, said. Officials have indicated they hope all of the agency’s infrastructure projects will be completed by the end of 2022, after facing delays in construction because of the coronavirus pandemic.

Updating the campus is a priority because efficiency will help the agency run better and ultimately reallocate money into its services, which benefit about 4,000 people daily, Roberts said.

“We need to protect this asset because we all know that the pandemic and the (economic) challenges that the lower income people face are getting worse, they’re not getting better,” he said. “So, we need to be able to care for all of God’s children in an efficient and in a compassionate way.”

One of Sisolak’s last public visits to a solar project was in late June, when MGM Resorts International unveiled its 100-megawatt array north of Las Vegas. That flat-field project powers 13 Strip properties and 36,000 hotel rooms.

Sisolak said the two groups’ investment show how projects large and small can benefit. He pointed out how much energy could be produced on the number of clear, sunny days in Clark County.

“It’s helpful (to sell energy back). When you get a facility like this, a nonprofit, once you get the capital expense out of the way, you’re going to save a lot of money on your utility bills,” Sisolak said. “These nonprofits provide such an invaluable service to our community, taking care of our most vulnerable. If we can save them money on the utility bills, it’s going to help everybody a long, long way.”