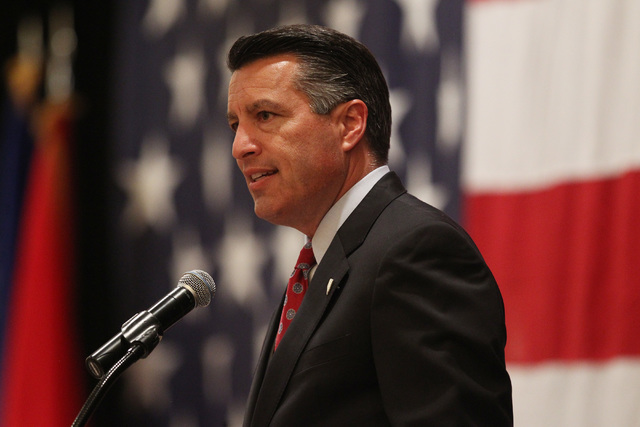 Gov. Brian Sandoval will sign Senate Bill 1 and Assembly Bill 1 into law at 11 a.m. Monday at the Richard Tam Alumni Center at the University of Nevada, Las Vegas.

Assembly Bill 1 authorizes the Clark County Commission to raise the county sales tax by one-tenth of a percentage point to fund more than 300 additional police officers. The bill, which required a simple majority vote to pass, was approved in the Assembly on a 35-7 vote and in the Senate on a 21-0 vote.

The sales tax increase would generate about $39 million, with $7.9 million going to the Las Vegas resort corridor for 66 new officers; $31.3 million would be budgeted countywide for 245 new officers.

Senate Bill 1, passed Friday after a weeklong special session, calls for an increase in Clark County’s hotel room tax to help finance a $1.9 billion, 65,000-seat domed stadium, clearing a path for the relocation of the National Football League’s Oakland Raiders to Las Vegas.

Raiders owner Mark Davis has pledged to move the team to Las Vegas, provided three-fourths of NFL team owners (24 of 32) approve. Raiders officials have said that if the stadium deal passed, they would present a plan and announce their intentions to move to Las Vegas at next week’s NFL owners meeting in Houston. A vote on relocation could come at a January owners meeting, also in Houston.