ROCKY GROUND?
The land near the Raiders stadium may be full of real estate buzz, but it may not be the easiest place to build. 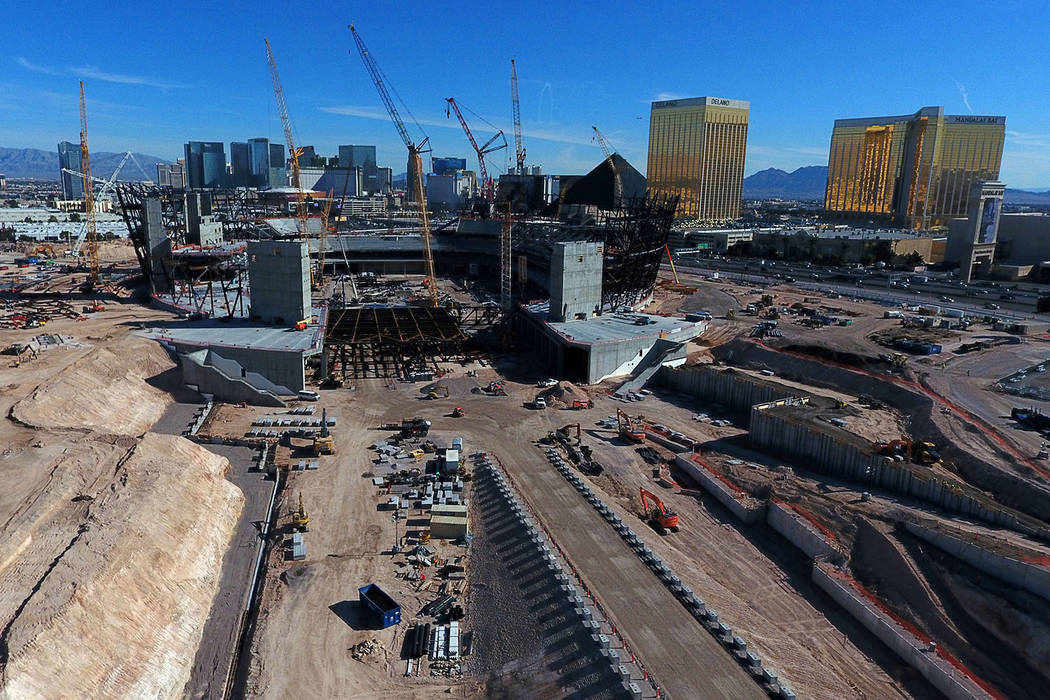 A mile or so west of the Strip, a cluster of industrial buildings is nothing too memorable, home to auto-repair shops, wholesalers and other businesses.

Now it has a new neighbor: the monster real estate project that is the Raiders stadium.

Las Vegas’ 65,000-seat pro football venue has sparked a surge of interest in the surrounding area. Two properties across the street – including one being eyed for a hotel project – sold for big values after the Raiders bought their land, and brokers and buyers have been calling landlords to see if they’d sell.

But overall, it may not be the best or easiest place to build a big project or open a retail business.

The $1.84 billion stadium, backed by $750 million in public funds, is under construction at Russell Road and Interstate 15 and slated to open next year. There could be more property sales as the NFL team gets closer to game day, some real estate pros said, and Clark County officials have proposed a Stadium District to guide development in the area.

Learn more about nearby land owners

However, neighboring properties are mostly chopped into small parcels, ownership is fractured, and many sites have tenants, making it harder for developers to cobble together big project sites, real estate pros said.

Moreover, countless bars and restaurants are a short drive away on Las Vegas Boulevard, potentially posing steep competition for taverns and eateries that open near the Raiders. And even if it hosts 46 events annually, as is predicted, the domed stadium would be dark for the vast majority of the year, meaning most days it would not generate stampedes of visitors who could spend money at nearby businesses.

Las Vegas broker Paul Reed, owner of Reed Commercial Properties, has a listing near the stadium. He figured the project would have sparked a repeat of the mid-2000s real estate craze, when Las Vegas — then flooded with easy money — had booming construction and widespread flipping.

What could get built?

There is no indication that Las Vegas would be harmed if the stadium does not spark other projects. Before the Raiders came around, locals weren’t clamoring to redevelop the area — it was just one of many industrial pockets around the valley.

Plus, given the stadium site’s history of failed ideas, it’s almost a miracle the project is being built at all.

Investors drew up plans for at least seven other projects there since the 1970s, including hotels, a high-speed-train station, a three-stadium sports complex and a 2 million-square-foot fashion expo center. Lenders ultimately foreclosed on the land in 2009 after the economy collapsed.

Cushman & Wakefield broker Dan Hubbard, a retail-property specialist, said it would be “fairly difficult” to build a large project near the stadium because many of the surrounding parcels are only about 2 acres each and have tenants, and it’s “not easy” to pull off a purchase from multiple landlords at once. On top of that, land prices have climbed.

Hubbard and others figure developers will “go vertical” with densely built projects — which can generate more revenue — on small lots, such as a hotel or residential tower with ground-floor retail.

Some brokers also said garages could get built amid an anticipated shortage of parking at the stadium.

“You’ll probably get some smart guys to build a garage or two and charge a premium for parking to be right across the street,” said CBRE Group broker Michael Parks, a hotel-casino specialist.

One issue facing prospective developers and business owners is the number of events at the stadium.

According to a projection by Las Vegas Stadium Authority staff, the facility will host nearly four dozen events a year, including NFL games, soccer matches and motorsports.

Kennedy, founder of J.A. Kennedy Real Estate Co., bought a 2-acre industrial site near the stadium last year and said his plans for the parcel are “a long way from coming together.” But he indicated that projects in the area would have to lure customers all year and not just rely on football games, concerts or other big events at the stadium to generate foot traffic.

“What business do you know (can) survive on 60 nights a year?” he said.

The Raiders bought their project site in May 2017 and are scheduled to move to Las Vegas from Oakland, California, next year. But a few neighbors have already cashed in.

Investment firm Global Trust Group in August 2017 bought a vacant 2.5-acre parcel along Hacienda Avenue, just north of the stadium site, for $7.25 million, or $2.9 million an acre. Then in November, developer Osprey Real Estate Capital and Huntington Hotel Group acquired a 2-acre industrial site on Polaris Avenue, just west of the stadium, for $6.5 million, or $3.15 million per acre.

Those are the only parcels directly across from the stadium that have sold since the Raiders closed escrow, property records indicate.

Osprey founder Sean Dalesandro said his group is looking to build retail space and a 20-story hotel, and that he wants more acreage.

“Anyone who’s selling land over there, we’re interesting in buying it,” he said.

As he sees it, it’s only a matter of time before more investors buy property.

“Before, it was just antiquated industrial stuff,” Dalesandro said of the area, “and now there’s a stadium across the street.”

Meanwhile, Clark County held a kick-off meeting about a proposed Stadium District Master Plan in late September. A slideshow on the county’s website says the Stadium District would span 787 acres, with numerous properties near the football stadium eyed for commercial/tourist uses.

County Commissioner Michael Naft, whose district includes the stadium, said he can’t speak to whether county officials are considering expediting zoning applications for projects in the Stadium District.

Asked what the ultimate goal is, he said the Raiders stadium is a “tremendous asset” that should be used “to the max,” but added the county is still “pretty early on” in formulating the master plan.

Still, more deals could be on the way.

Realty Investment Group owner Al Barbagallo, who brokered the sale to Osprey and Huntington, said parking developers have contacted him to view parcels that are walking distance from the stadium, and he has heard that condo and apartment builders are looking around as well.

Jennifer Lewis, a vice president with Lewis Management Corp., operator of an industrial park just north of the stadium, said people in suits have been spotted walking around the area, apparently scoping out sites.

“We’ve seen that a few times,” she said. “It’s not a neighborhood where people wear suits and walk around much. We know people are out looking.”

LIVECAM: Monitor the progress of Las Vegas Stadium in this view looking south toward the construction site.
Like and follow Vegas Nation