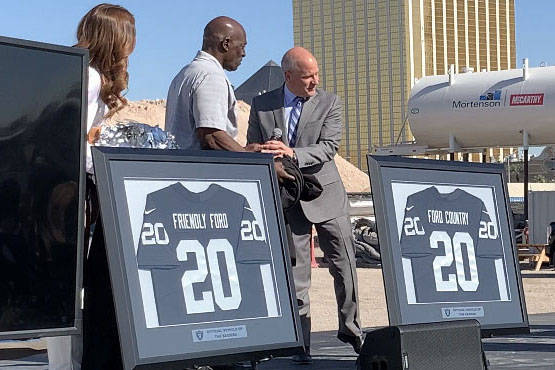 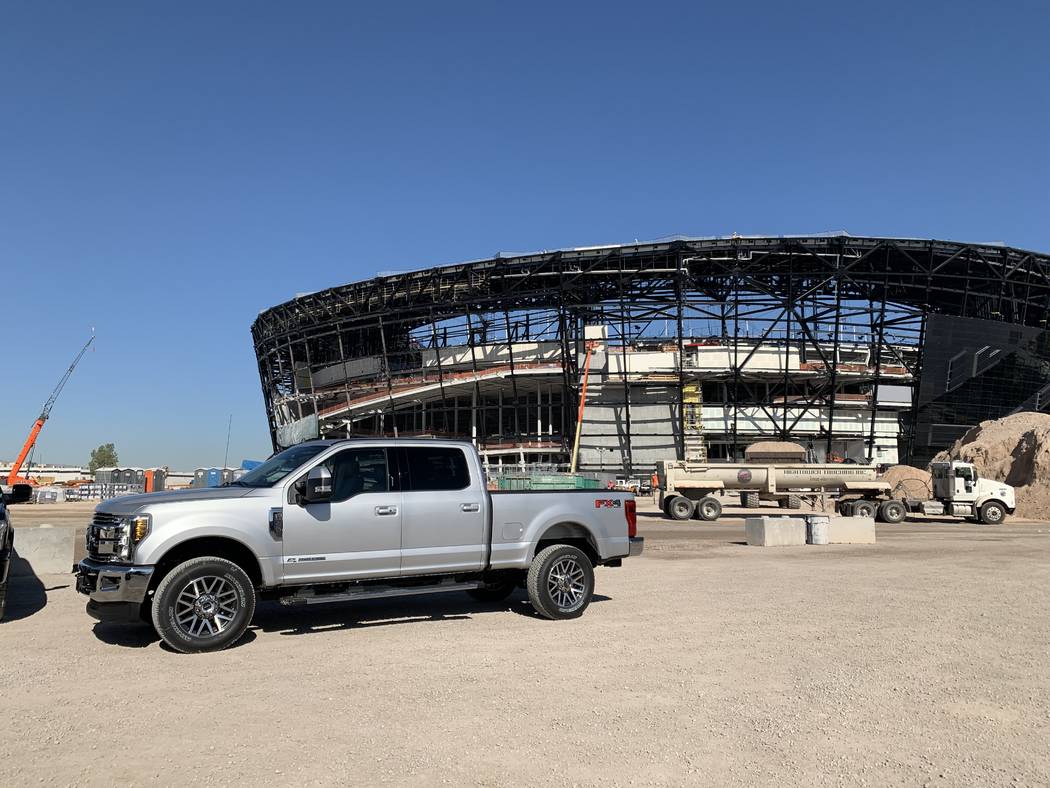 A Ford truck sits in front of Allegiant Stadium in Las Vegas after the company was announced as a founding sponsor of the $2 billion facility, Wednesday, Nov. 6, 2019. (Mick Akers/Las Vegas Review-Journal)

The Raiders named Desert Ford Dealers as a founding partner of Allegiant Stadium on Wednesday, nearly nine months ahead of its scheduled opening.

Raiders President Marc Badain also announced Ford as the official vehicle of the NFL team, which will christen the $2 billion, 65,000-seat indoor stadium next season.

Being a founding partner of the stadium will allow Ford to incorporate the brand into the facility and to operate game day demonstrations.

“They’ll (Ford) have certain parts of the building essentially named after Ford, and they’ll activate with their cars and trucks on-site,” Badain said. “There will be some things that they’ll do to encourage fan engagement and some really exciting things for the parking lots for the tailgating experience, both here on site (at the stadium) and some of the ancillary sites we’re talking about.”

Gary Ackerman, president of Gaudin Ford, said that as a lifelong Las Vegan, he couldn’t be more excited to be part of the pro sports explosion in the city.

“Our town has been so starved for professional sports for so long,” Ackerman said. “It’s just a huge day for the whole community. To add the sugar to the cake, partnering with Ford Motor Co. is something that we never dreamed would happen. So it’s a very big day.”

Raiders players have already started to represent the official vehicle of the team, Ackerman said.

“The partnership runs very deep,” he said. “We’ve sold several of the new draft picks of the Raiders this year Fords already, so we’re already starting to see that fruit grow on the tree.”

Ford is the ninth announced founding partner for Allegiant Stadium, with a few more deals expected to be announced before construction finishes July 31.