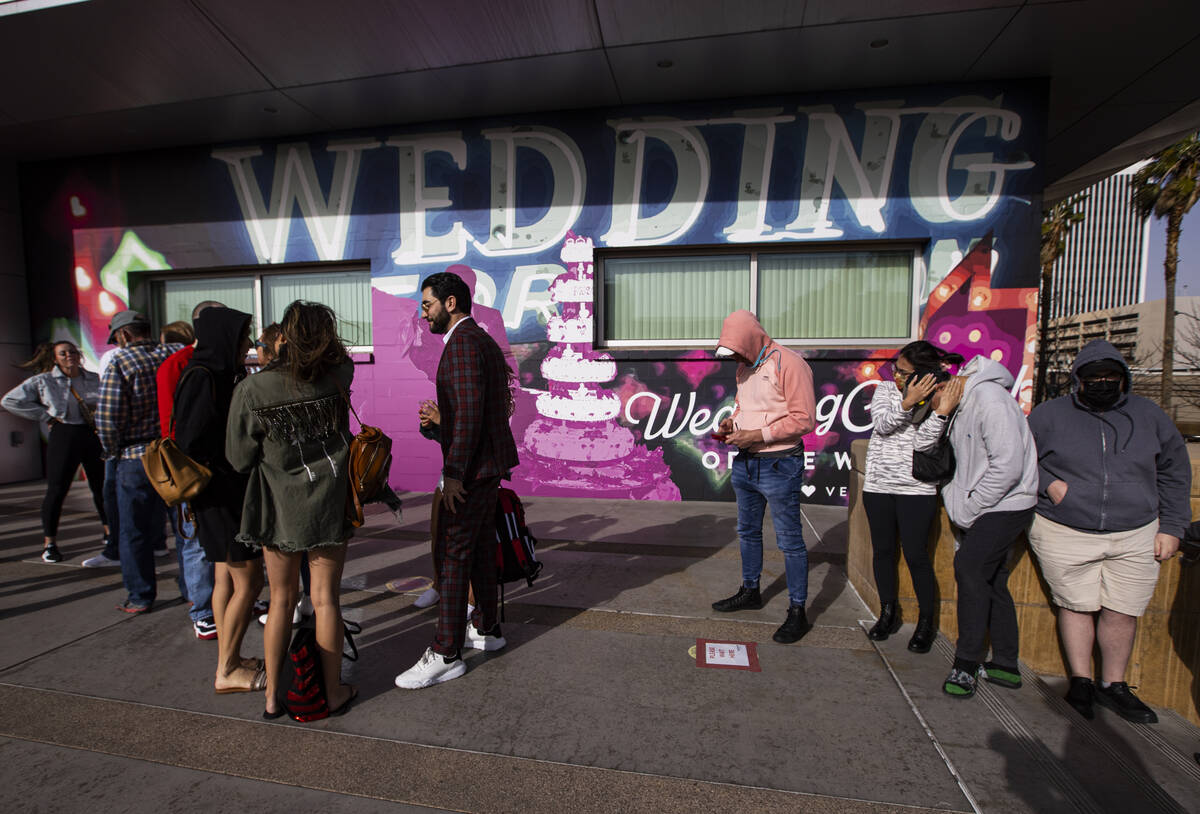 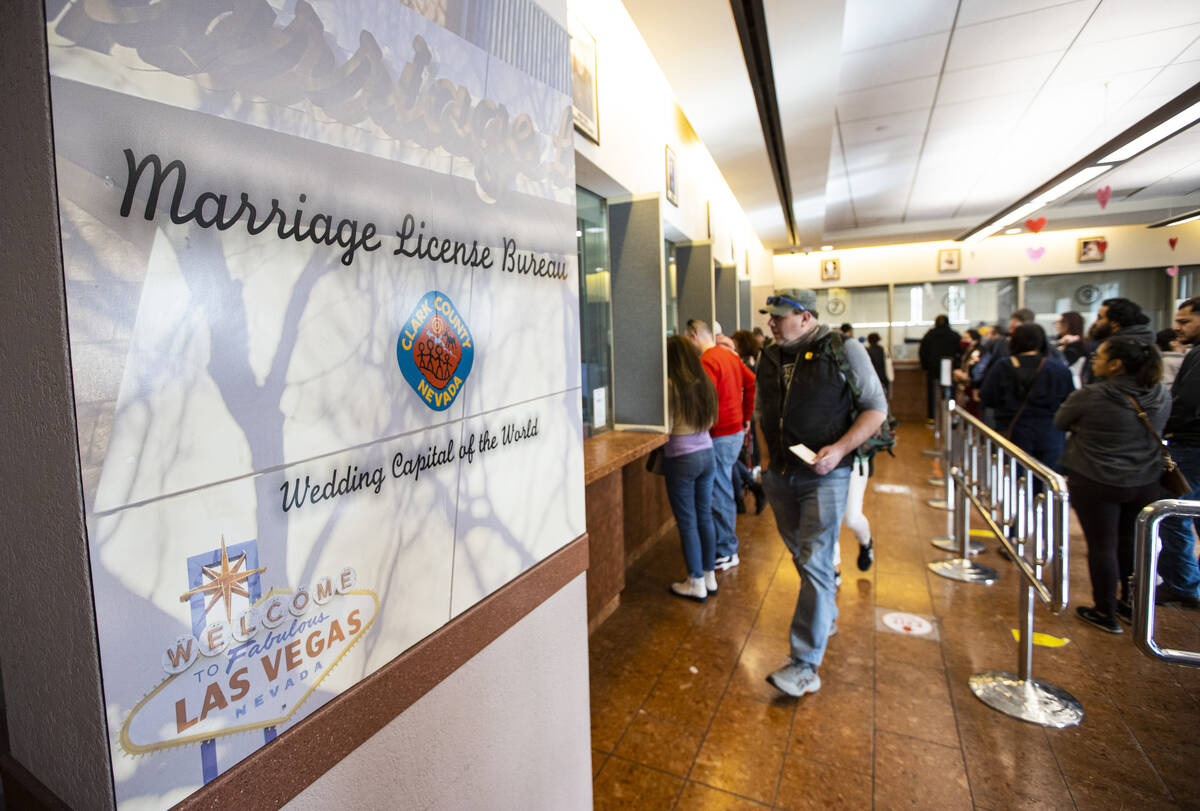 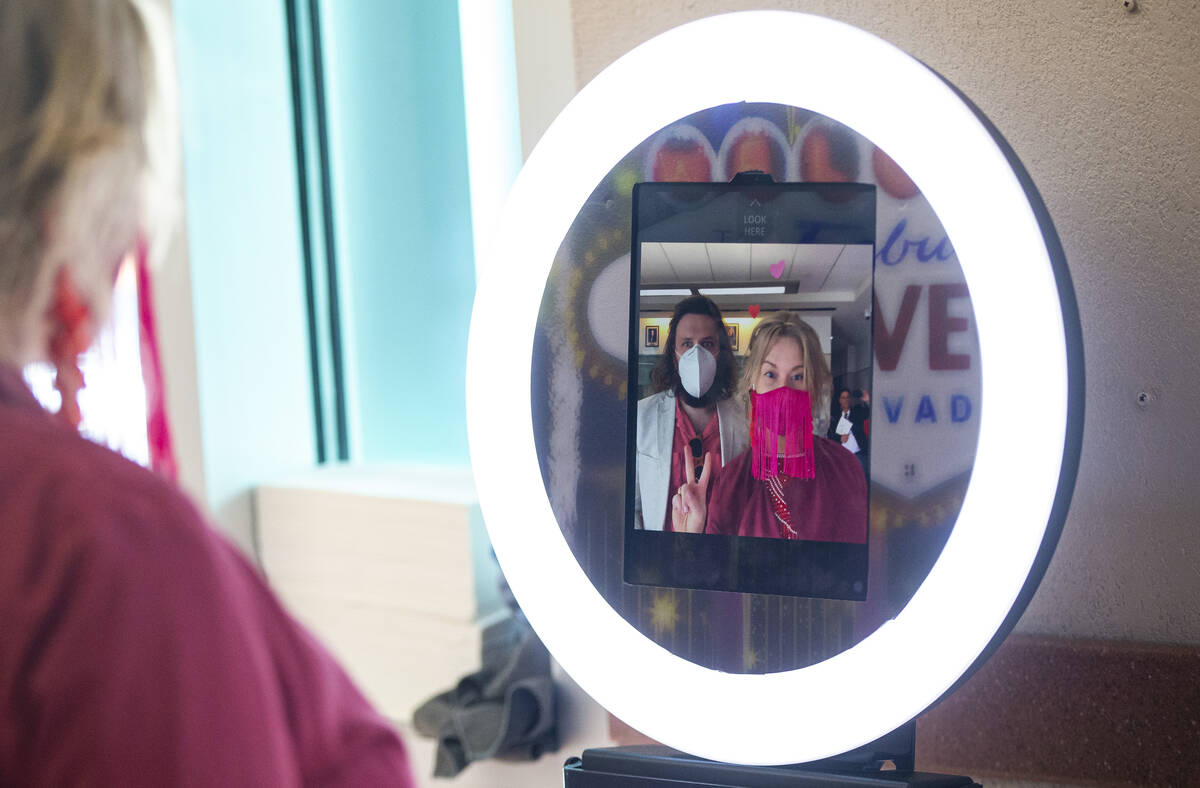 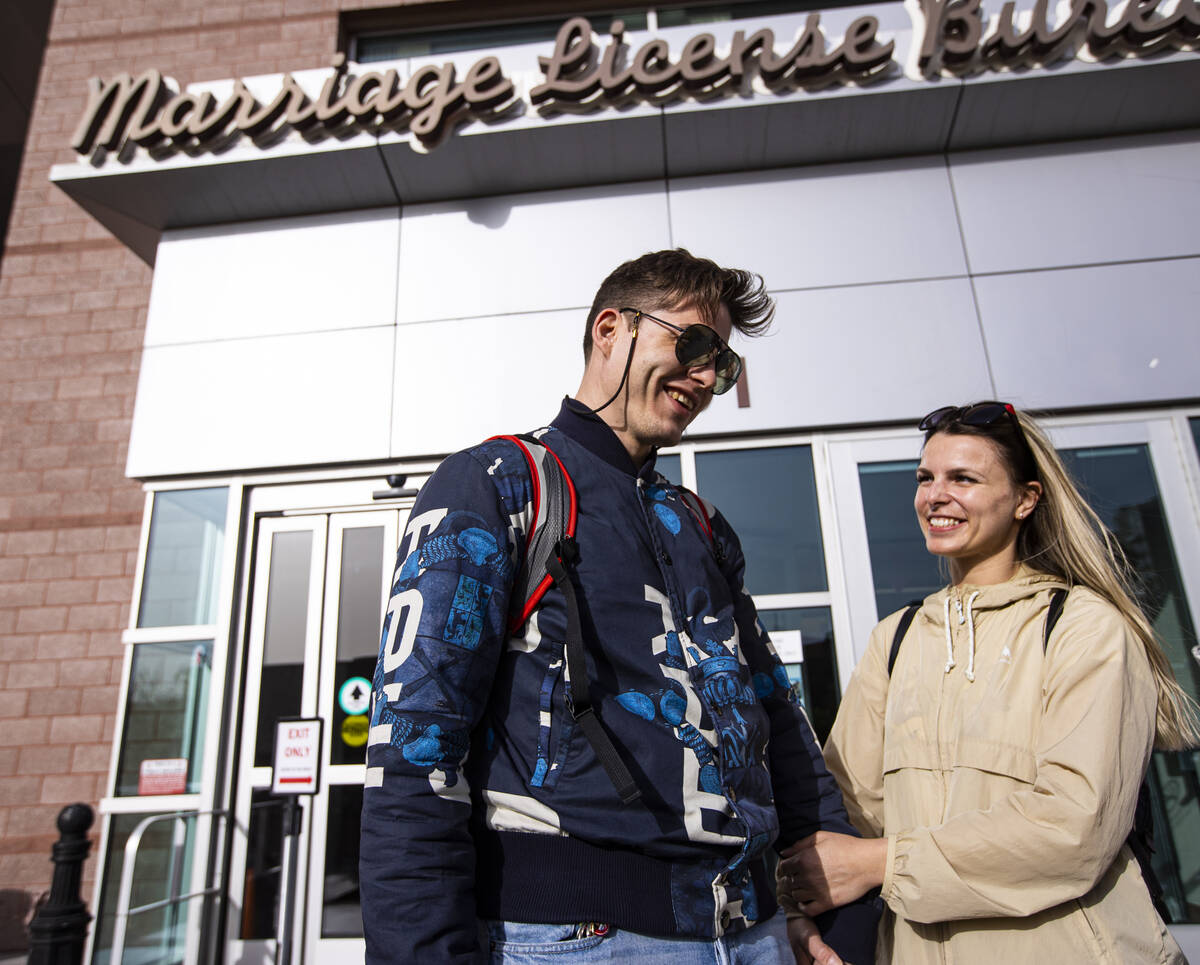 Bernhard, left, and Ivan, of Austria, talk ahead of their wedding at the Clark County Marriage License Bureau on Monday, Feb. 21, 2022, in Las Vegas. (Chase Stevens/Las Vegas Review-Journal) @csstevensphoto 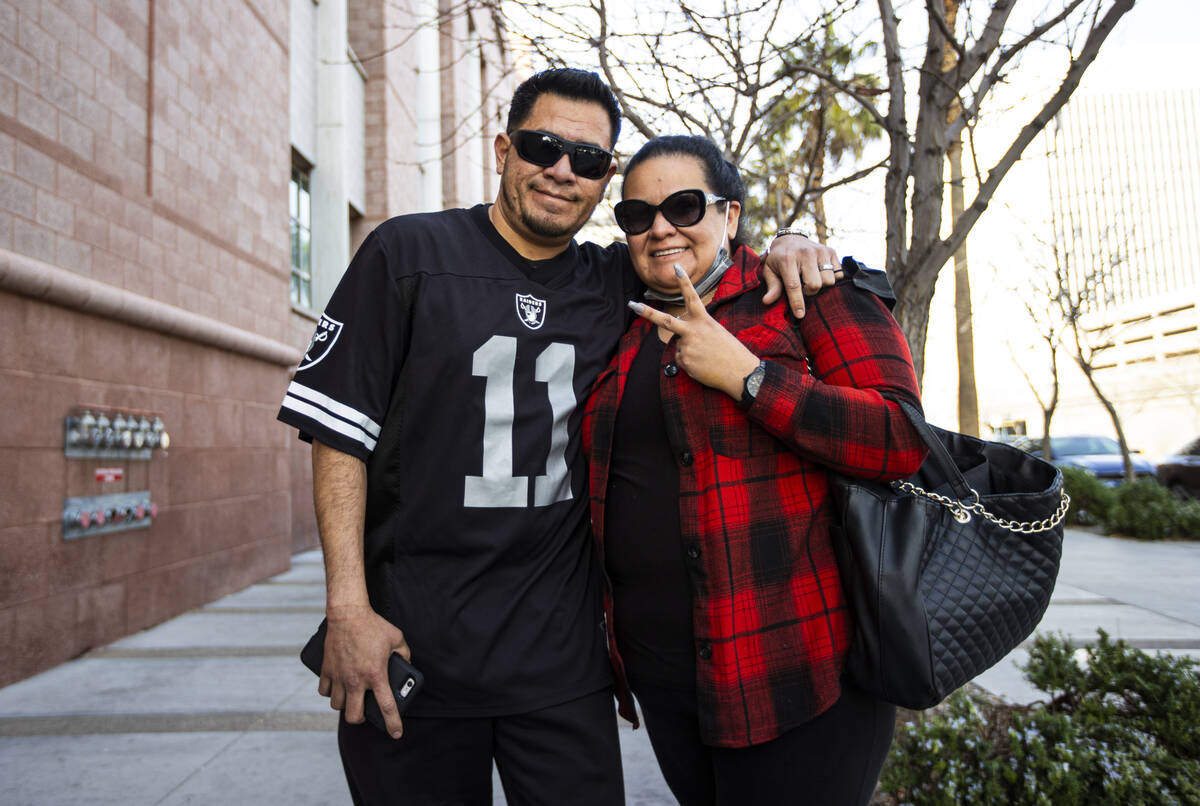 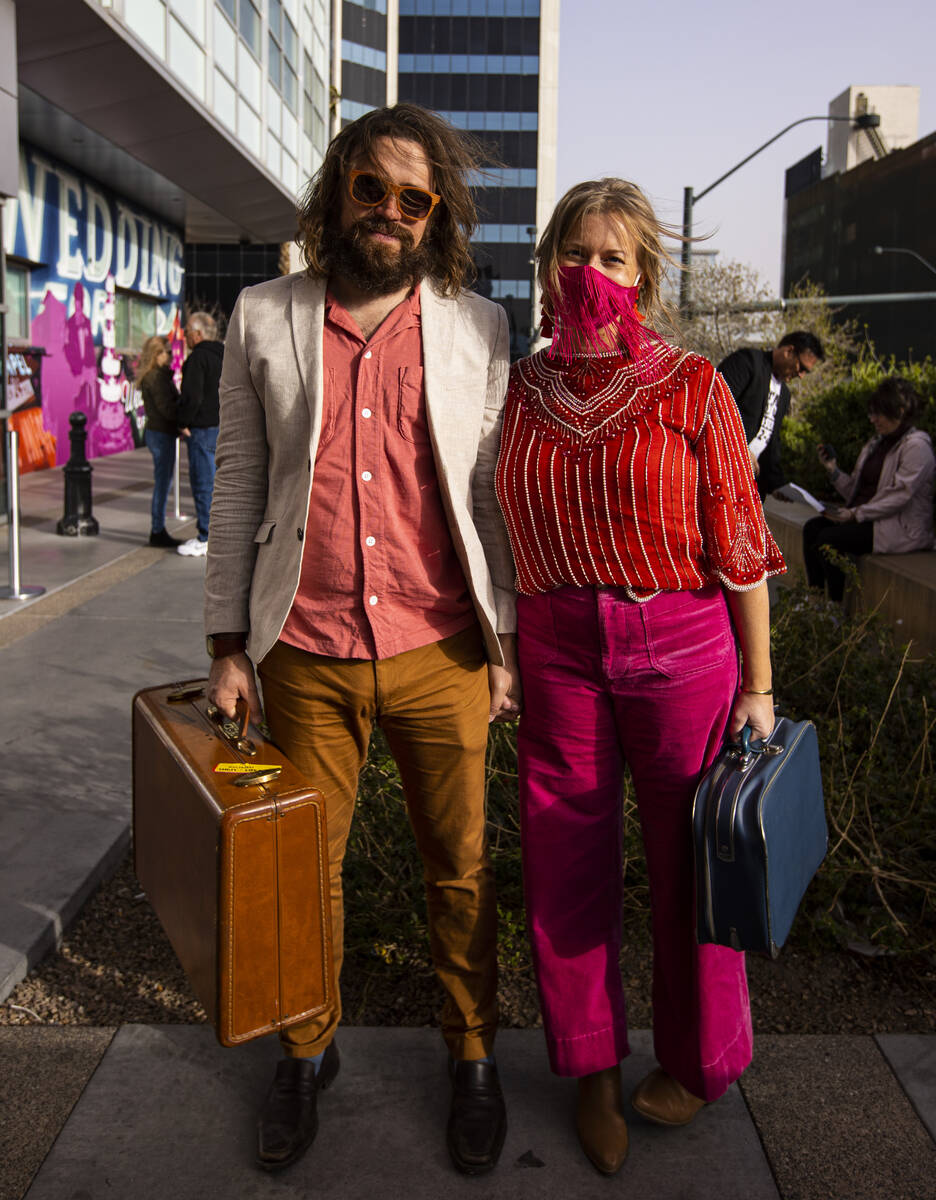 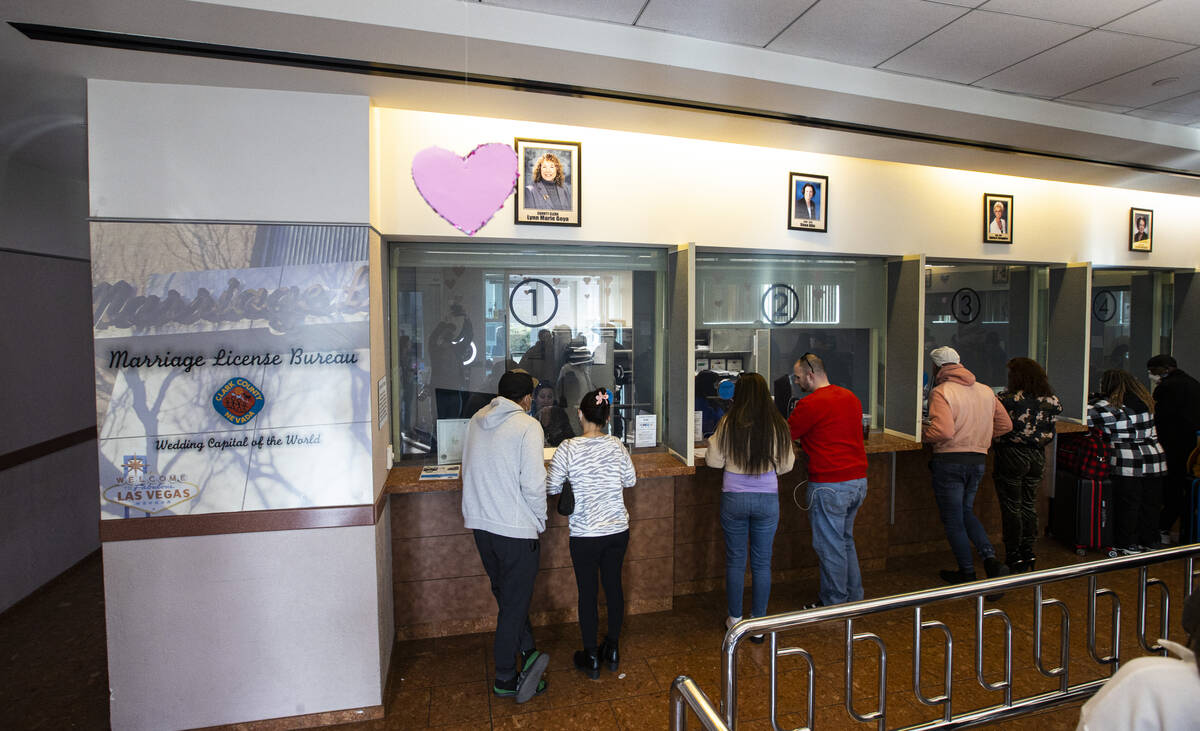 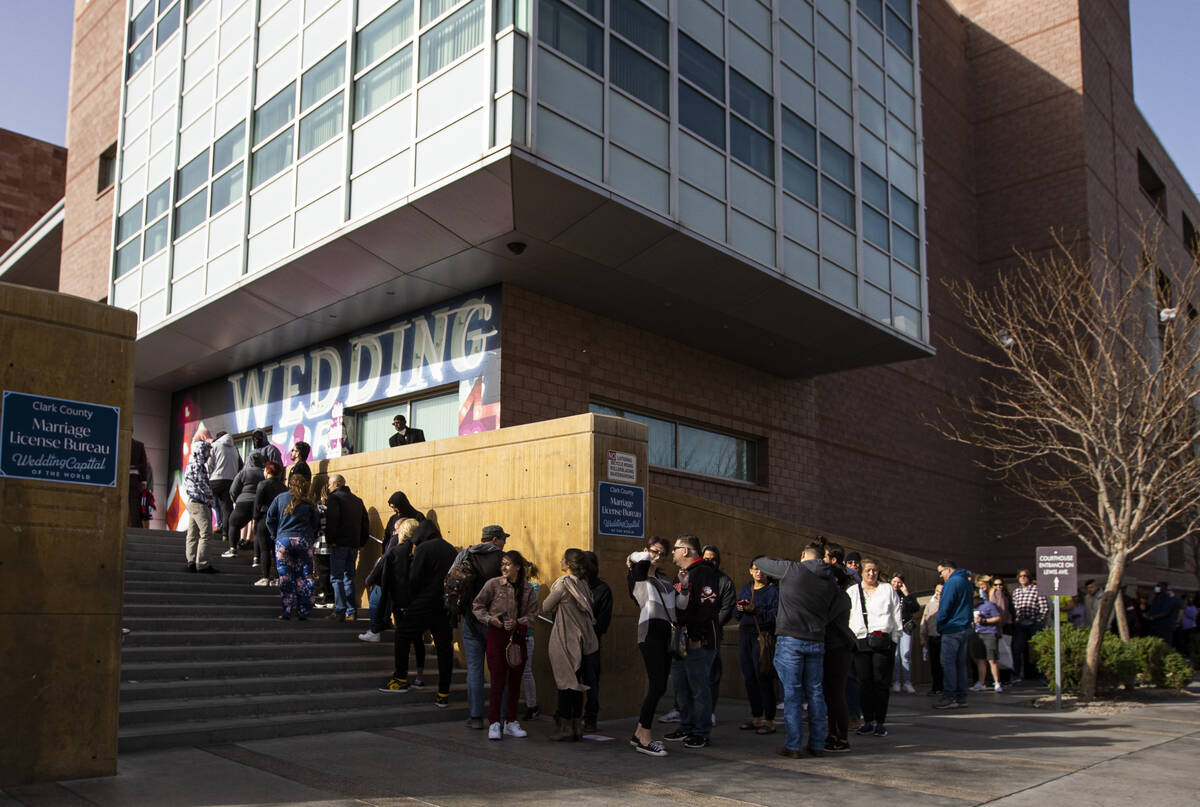 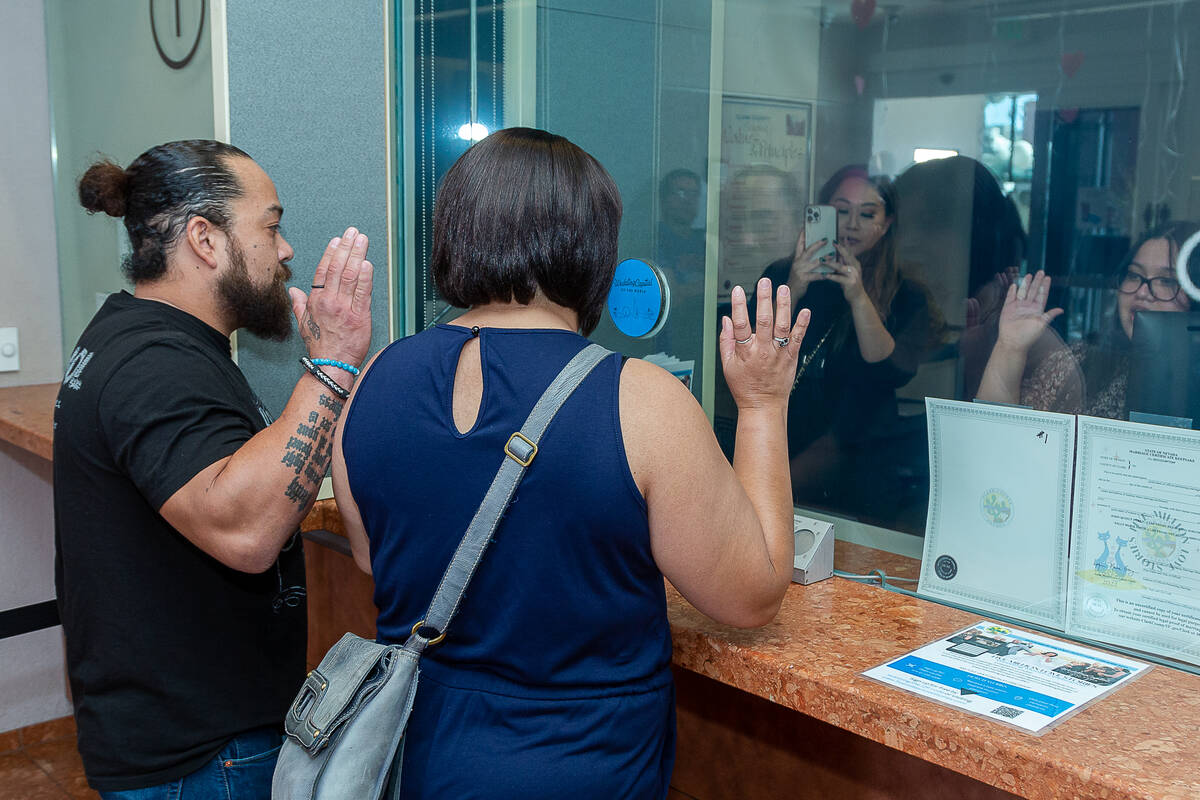 Mayra Ramirez and Luis Pantoja take an oath when receiving their marriage license at the Clark County Marriage License Bureau on Sunday, Feb. 20, 2022. The Patterson, California couple received the 5 millionth marriage license issued by the county since its inception in 1909. (Photo courtesy of Edison Graff, Las Vegas Underground) 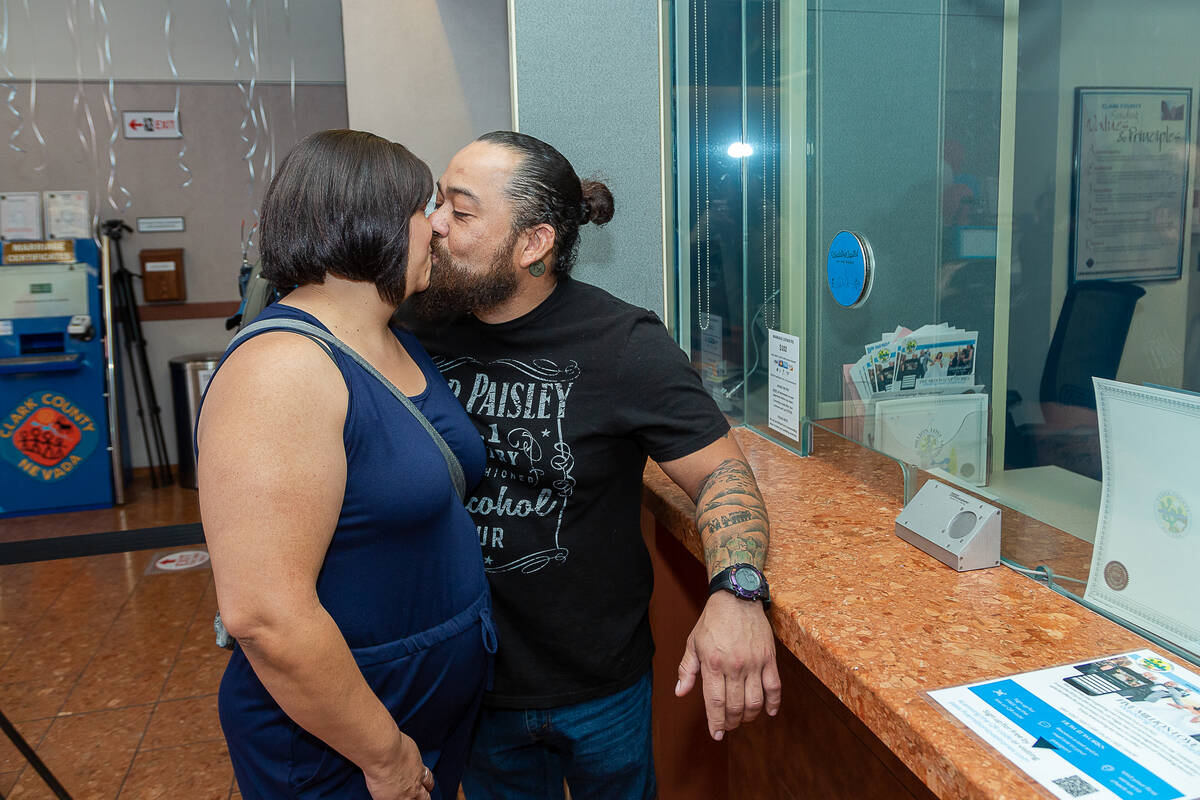 Mayra Ramirez and Luis Pantoja share a kiss when receiving their marriage license at the Clark County Marriage License Bureau on Sunday, Feb. 20, 2022. The Patterson, California couple received the 5 millionth marriage license issued by the county since its inception in 1909. (Photo courtesy of Edison Graff, Las Vegas Underground) 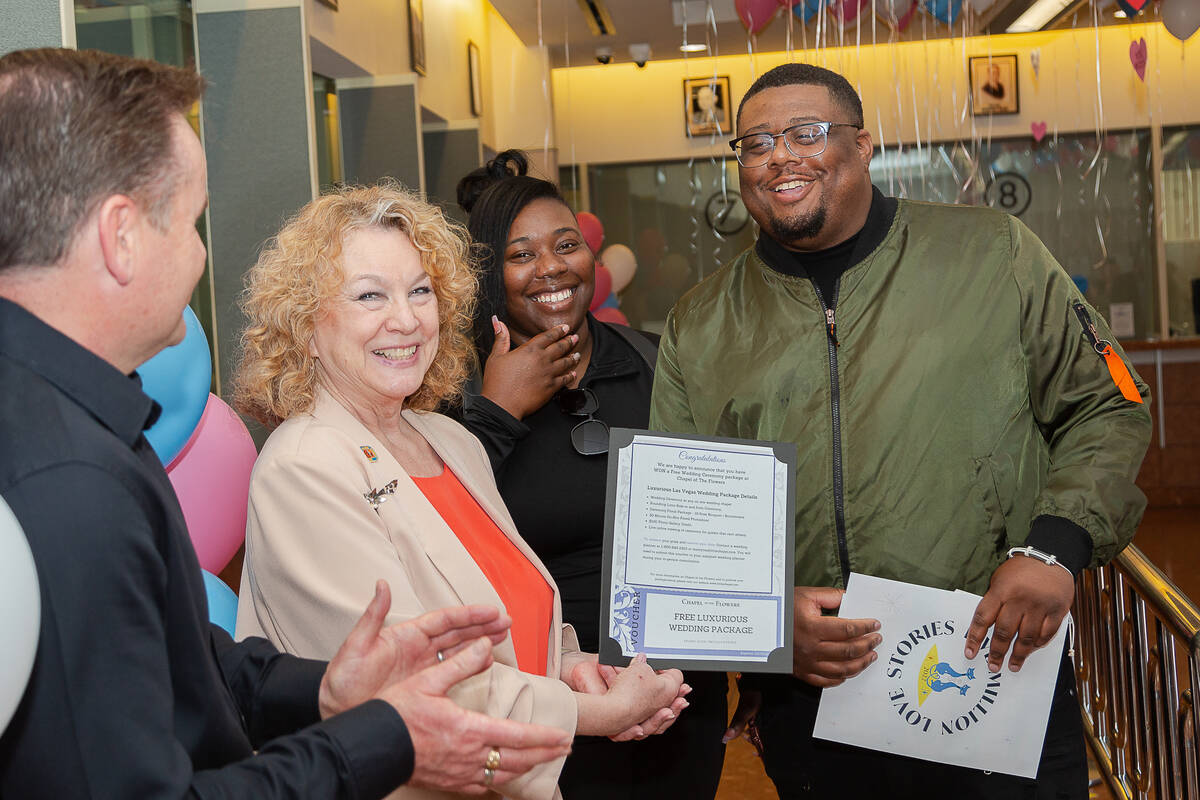 Clark County Clerk Lynn Marie Goya gives a wedding package at Chapel of the Flowers to Brianna Cloy and Trevin Patton, of Antioch, California. The couple received the gift in celebration of the 5 millionth wedding license issued by the county since its inception in 1909. (Photo courtesy of Edison Graff, Las Vegas Underground)

A lucky California couple received special congratulations for their nuptials on Sunday in the form of gifts from the Wedding Capital of the World when they received the 5 millionth marriage license issued in Clark County.

The license was issued to Patterson, California residents Mayra Ramirez and Luis Pantoja, according to a news release from the county and members of the Las Vegas Wedding Chamber of Commerce.

The celebration of the couple’s nuptials is part of a county-and-local-wedding-industry yearlong campaign, dubbed “Five Million Love Stories,” to promote couples who are part of the Las Vegas tradition.

“We’re so excited to be able to share this momentous occasion with Mayra and Luis, but it isn’t just this one couple, but the five million love stories of all the couples that came before and made the decision to marry in Las Vegas. It is their legacy that turned us into the Wedding Capital of the World,” Clark County Clerk Lynn Marie Goya said in the Sunday release.

The Marriage License Bureau, a division of the clerk’s office, issued more than 77,000 marriage licenses last year and typically sees about 600 marriages on Valentine’s Day. Tuesday’s date, 02-22-2022, also promises to be a popular wedding date for the industry that annually generates an estimated $2.5 billion for the county.

Los Angeles residents Melissa and Carlos De Leon said they chose Tuesday as their wedding date because they had been together for 22 years. The couple chose to come to Las Vegas for its celebratory atmosphere.

In an interview Monday, Goya said the office had expected to hit 5 million licenses on Saturday, but it was slower than expected. By the next day, however, the staff knew the goal was in sight.

A line wrapped around the block on Monday as couples planning to get married on Tuesday waited for their chance to get a license. Previous repeating dates like 07-07-07 and 11-11-11 brought thousands of weddings to the valley.

“One year, it was supposed to be a big day but it wasn’t busy,” Goya said. “A couple said, ‘Where’s the line?’ They love the crowd scene. Couples like to share the day with others.”

Austin, Texas resident Allison Kissell and her fiance TJ Lemanski chose Tuesday to get married because of its “auspicious date,” Kissell said. The couple had never been to Vegas before, and came straight from the airport to the license bureau because they only planned to be in town for 30 hours.

“I wanted a romantic and spontaneous gesture,” Kissell said.

The two also passed along a free wedding package at Chapel of the Flowers, to another couple, Brianna Cloy and Trevin Patton, of Antioch, California, according to the release.

“We are in shock,” Ramirez, 40, said in a news release. “I never win anything so this is huge, and it’s a great way to start off our life together.”

“It means good things are coming,” Pantoja, 39, added. “We wanted to keep things stress free and just us, not the big wedding — guess this is a little bigger now!”

The year of celebrations and sweepstakes through the “Five Million Love Stories” campaign includes a photo sharing contest.

Couples married in Las Vegas are invited to upload a photo to a special website or on Instagram with the #5MLoveSweeps to win a second honeymoon and vow renewal in Vegas. One couple will be selected monthly.

A special vow renewal event at Caesars Forum will be held later this year, according to the news release.