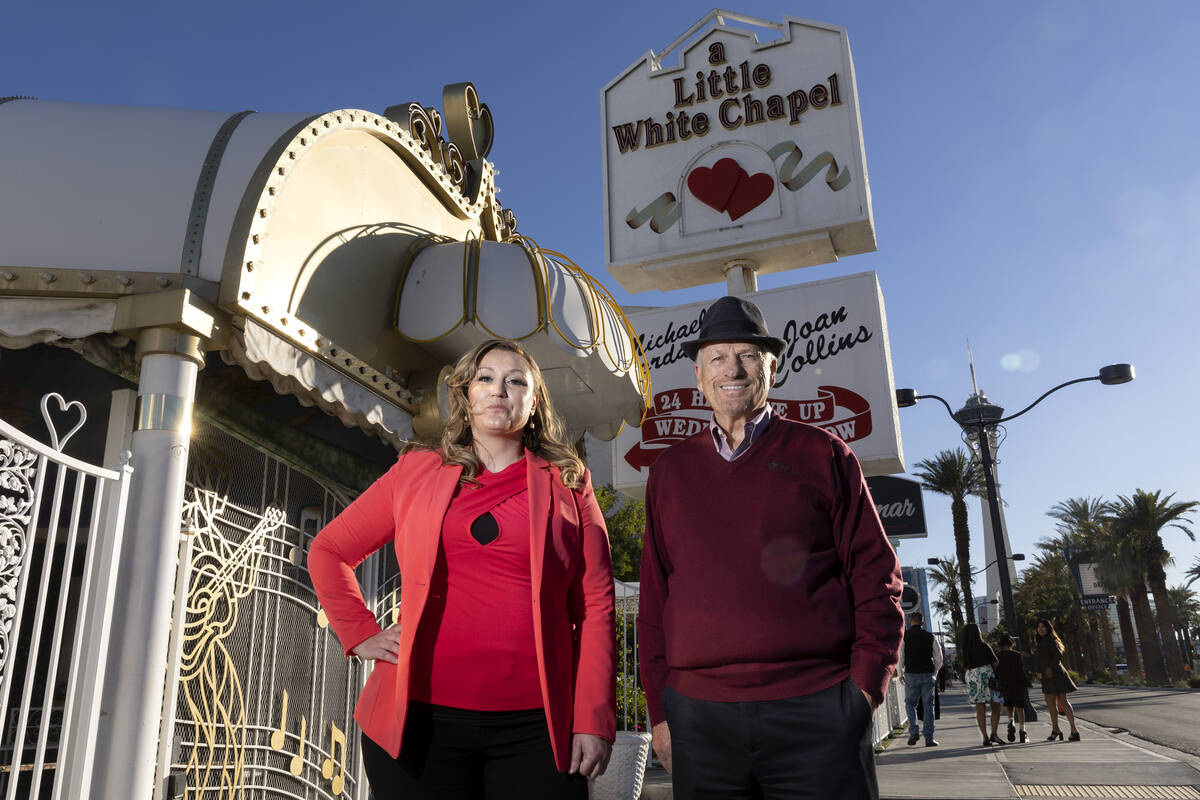 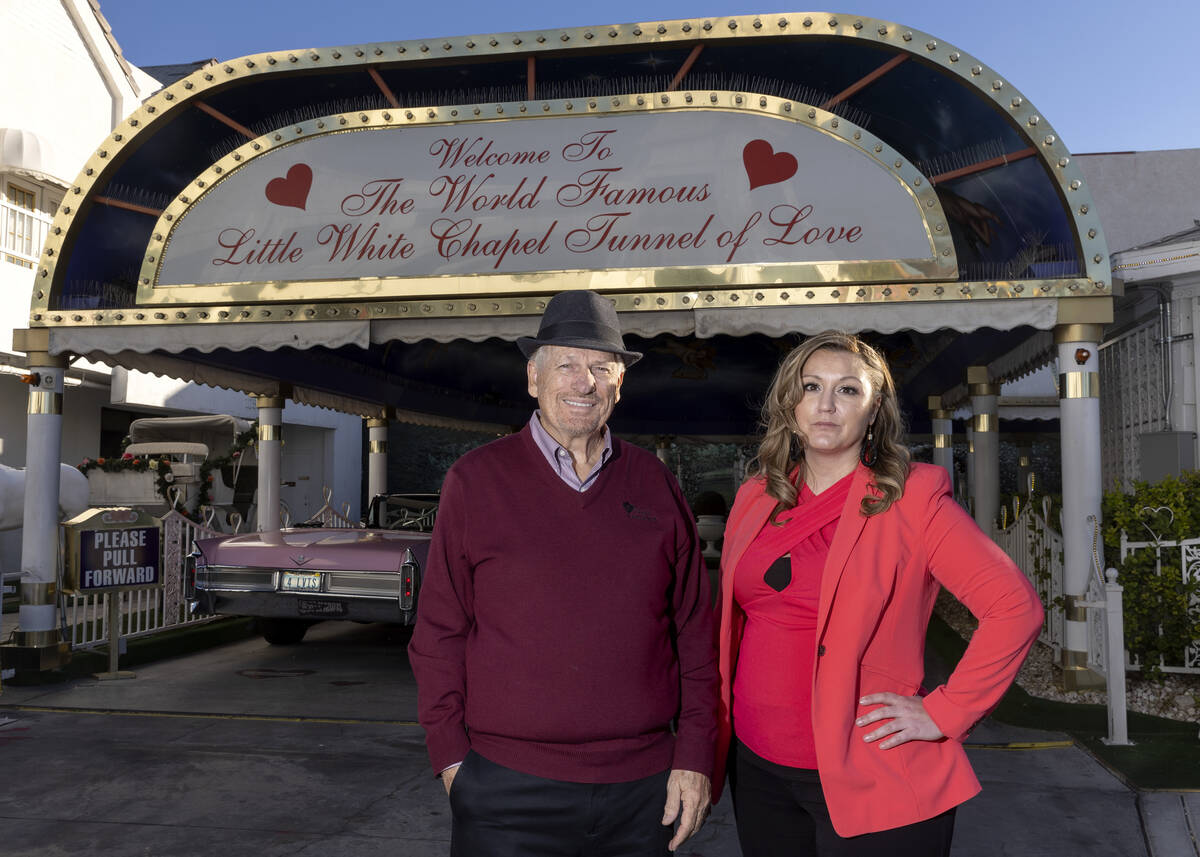 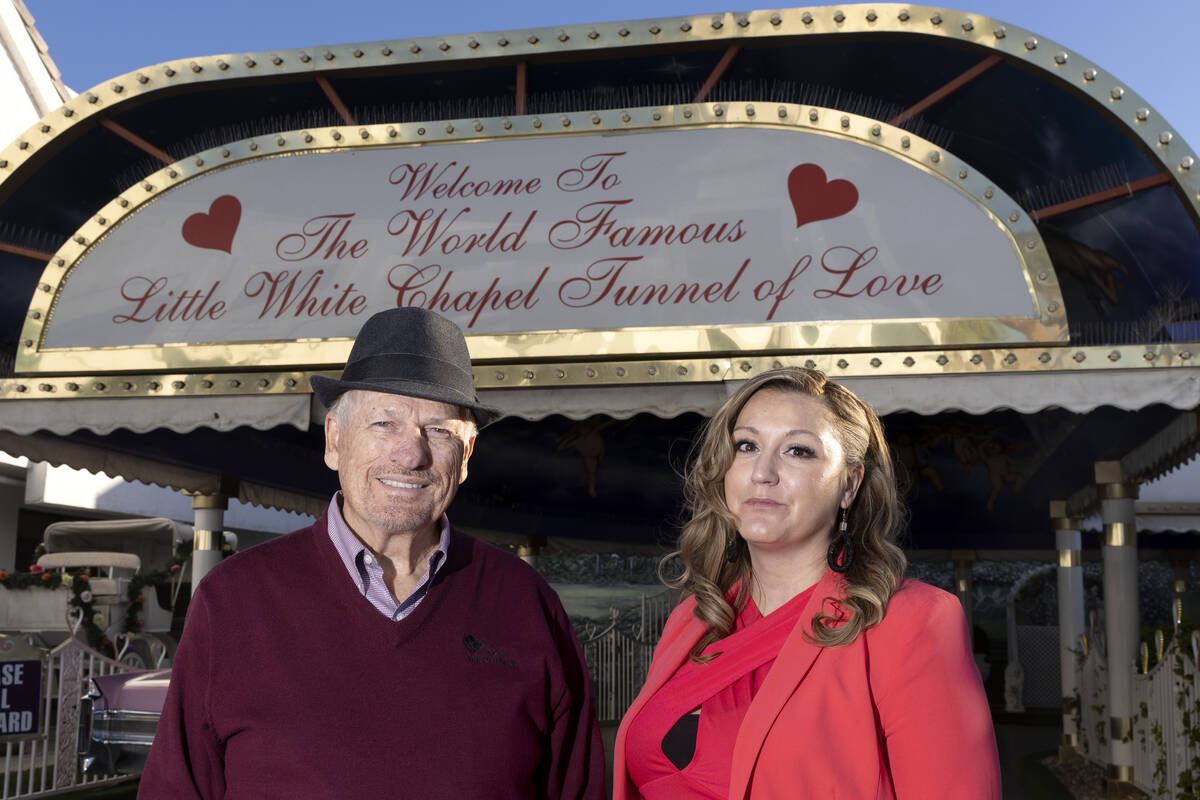 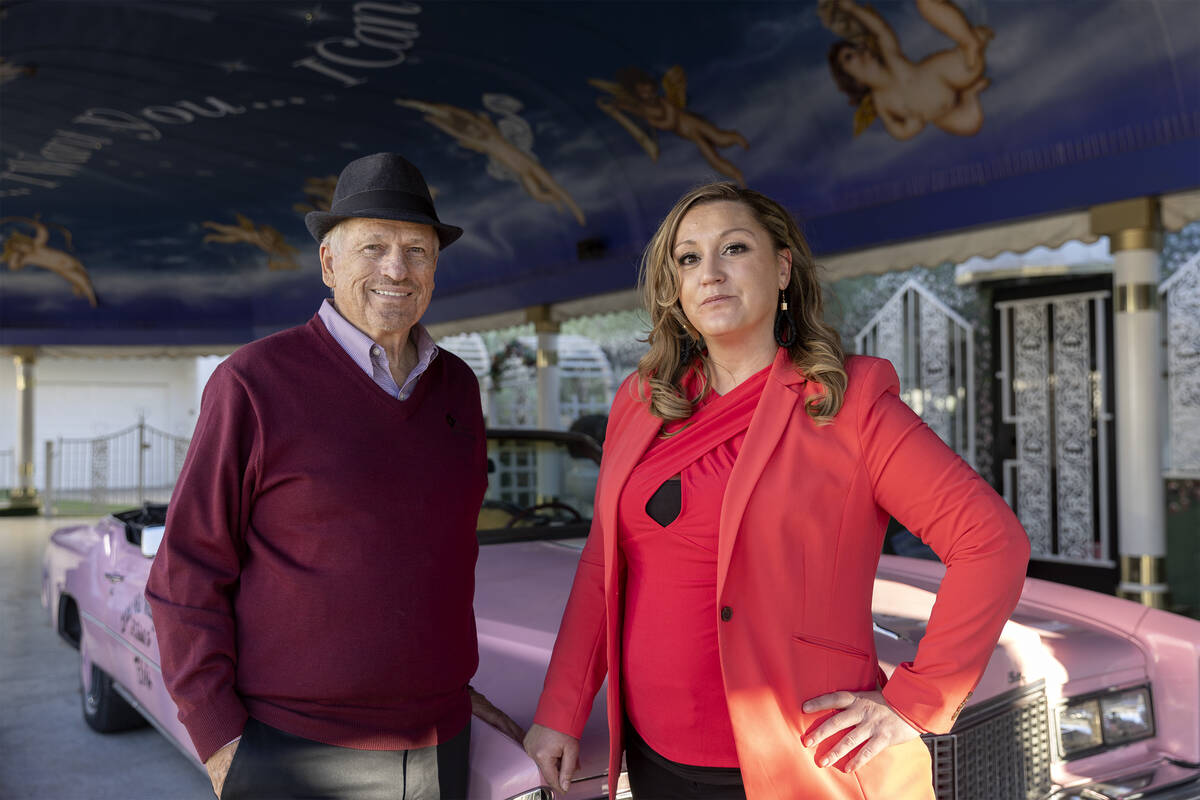 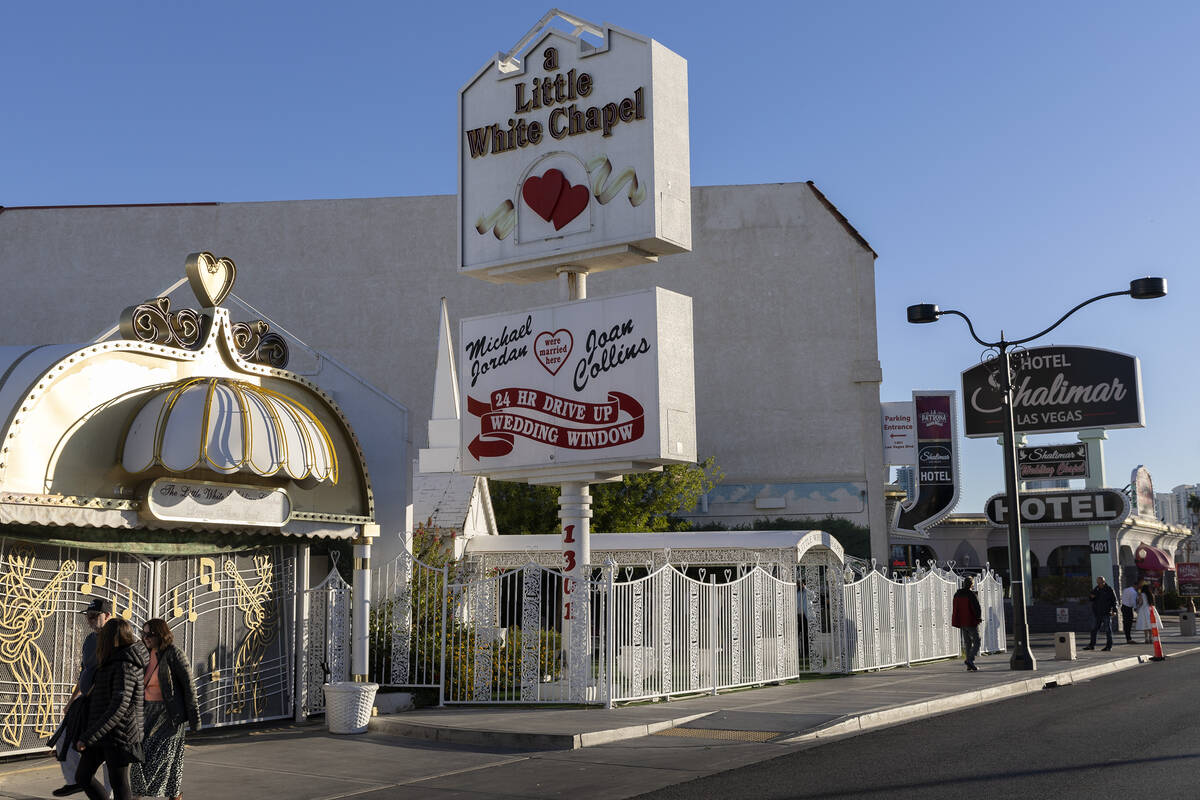 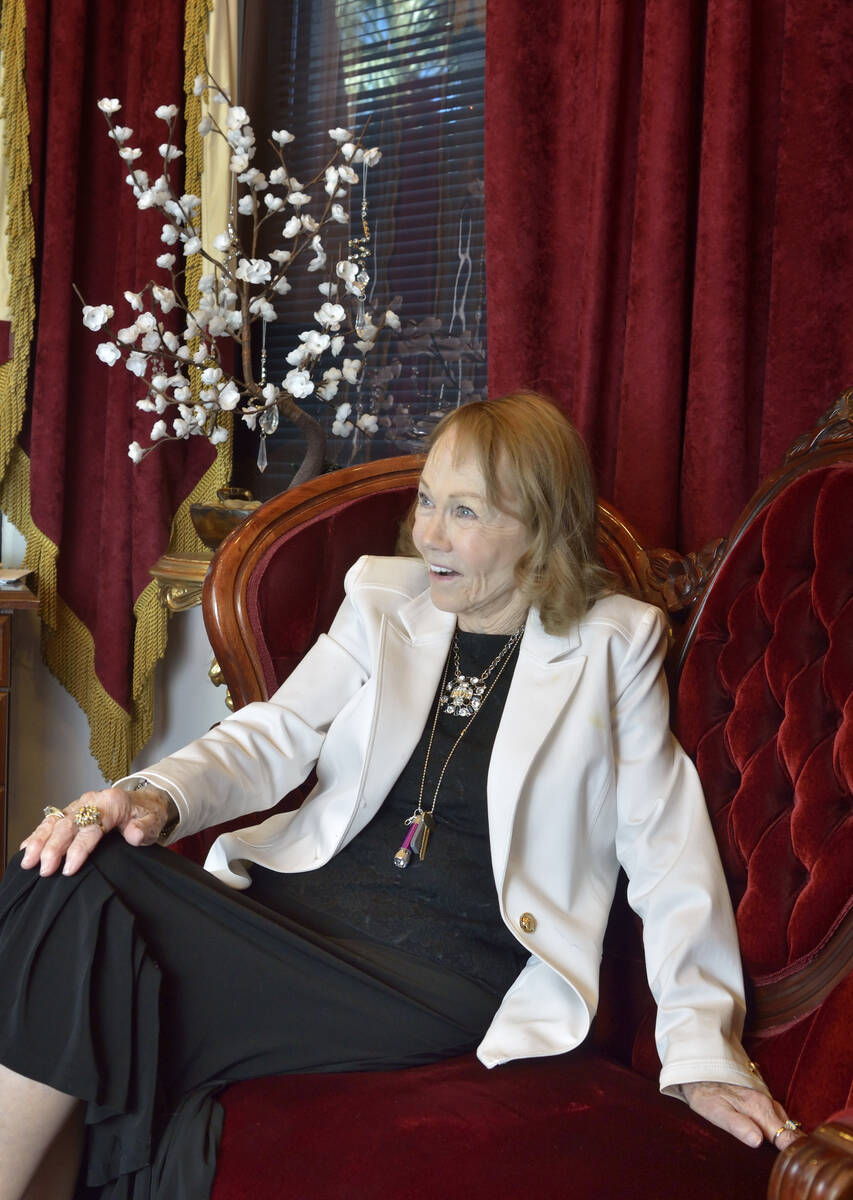 Charolette Richards, owner of A Little White Wedding Chapel, is shown during an interview in her office at the chapel at 1301 S. Las Vegas Blvd. in Las Vegas on Thursday, April 18, 2019. (Bill Hughes/Las Vegas Review-Journal)

The “Wedding Queen of The West”of Las Vegas weddings for the past 60 years is selling her matrimonial fortress.

A Little White Chapel owner Charolette Richards has sold her iconic business at 1301 Las Vegas Blvd. South, the deal closing Tuesday morning. The sale marks the end of an era, as Richards estimates the business has performed about a million weddings since opening in 1961.

But it is not the end of the “I dos,” as A Little White Chapel will still tie the knots under the stewardship of buyer Cliff Evarts, CEO and founder of the Vegas Weddings matrimonial haven.

Evarts vowed not to disclose the actual purchase price as the contract between the two parties is “confidential,” though he did say he paid “fair market price.”

Richards had put the chapel on the market for $12 million in 2019. Richards pulled the property from the market, then returned its listing in November 2021. The two sides convened in March to begin talks of the eventual sale.

With the purchase, Evarts’ company is now one of the biggest wedding companies in Las Vegas. He takes over the white-canopied entrance, outdoor gazebo, two indoor chapels, and its one-acre land parcel.

Asked Monday how it felt to be stepping down, Richards said, “It’s just beautiful for me. It doesn’t matter if it’s the beginning of my life, the middle of my life or what my life should come to be. I’ll never forget the thousands and thousands of people who have been married at the chapel.”

Vegas Weddings will continue to honor all current weddings reservations and keep its employees, staff, and officiants. Richards will remain as “honorary minister,” performing ceremonies in her retirement days. The chapel’s “Tunnel of Love” drive-thru chapel is being renamed Charolette’s Way.

Richards certainly is still busy performing ceremonies. She presided over 180 weddings on Friday, which was particularly busy for the 11/11/22 date (Veteran’s Day and also because 11/11 said to be an especially lucky date, says the Farmers’ Almanac).

The chapel is famous around the world for its celeb weddings. Ben Affleck and Jennifer Lopez were married at A Little White Chapel in July. Joe Jonas and Sophie Turner were married there in 2019. Bruce Willis and Demi Moore, Michael Jordan and Juanita Vanoy, Frank Sinatra and Mia Farrow, and Steve Lawrence and Eydie Gorme are among the dozens of celebs to celebrate at the chapel.

The incoming owners are aware of Richards’ exalted position in the wedding universe.

“She certainly is the icon of the industry. I’ve been thinking back on it, and we used to joke that everyone we ever hired had previously worked for Charolette,” Evarts said. “She basically has trained everyone in the wedding industry in Las Vegas. We’re really fortunate to be able to step in and try to carry her legend and legacy.”