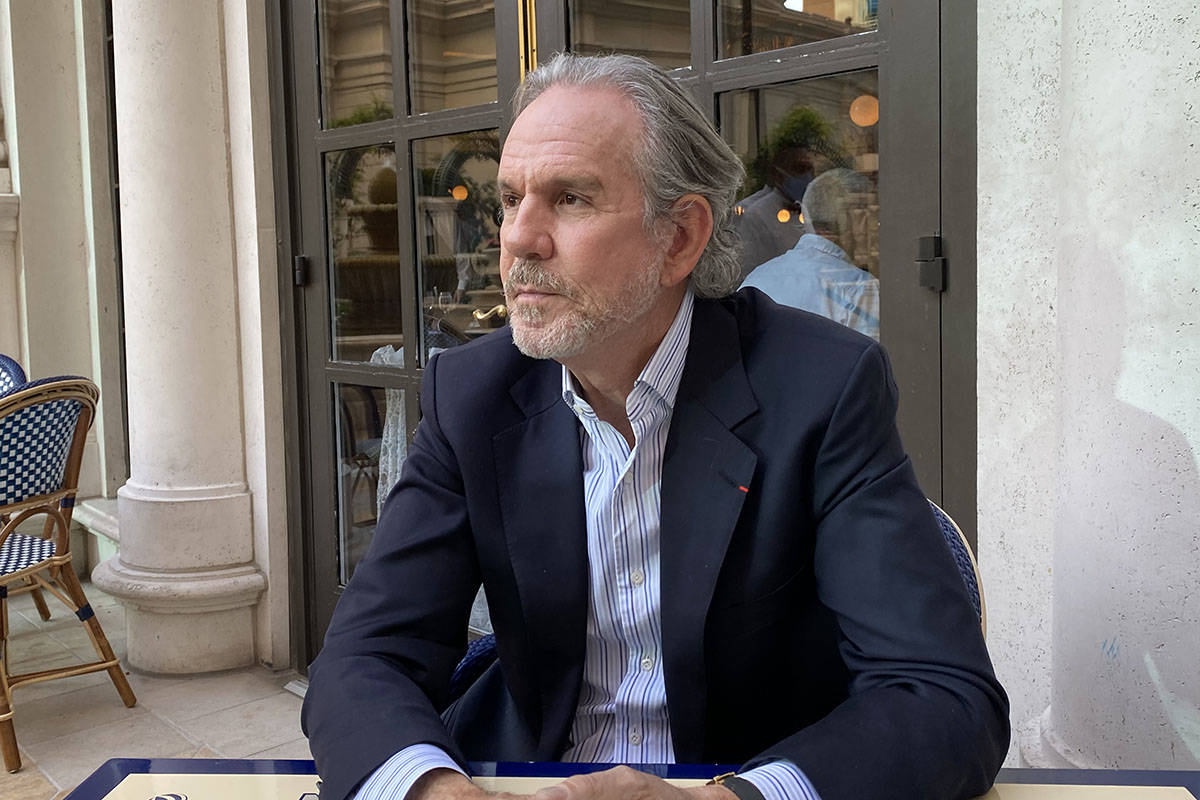 Chef Thomas Keller on the patio at Bouchon at The Venetian on April 9, 2021. (Al Mancini/Las Vegas Review-Journal) 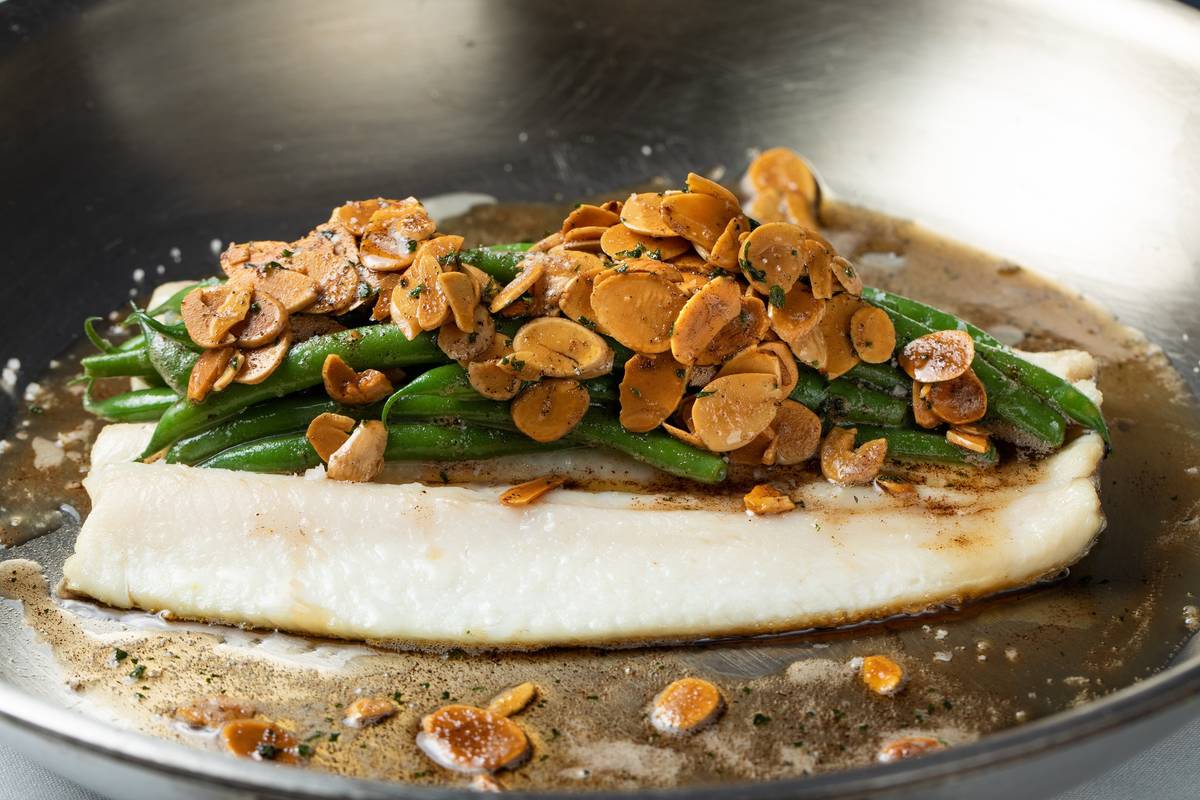 The trout almondine from Thomas Keller's Bouchon at The Venetian. (David Escalante) 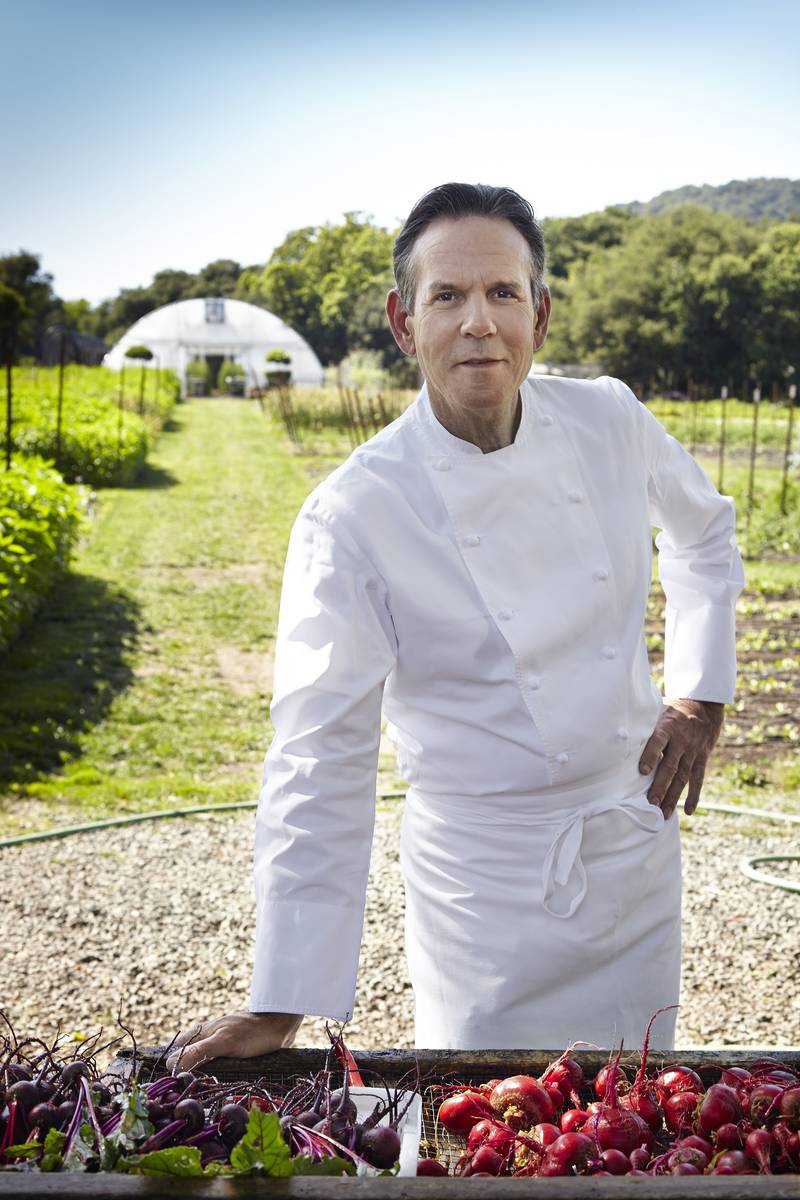 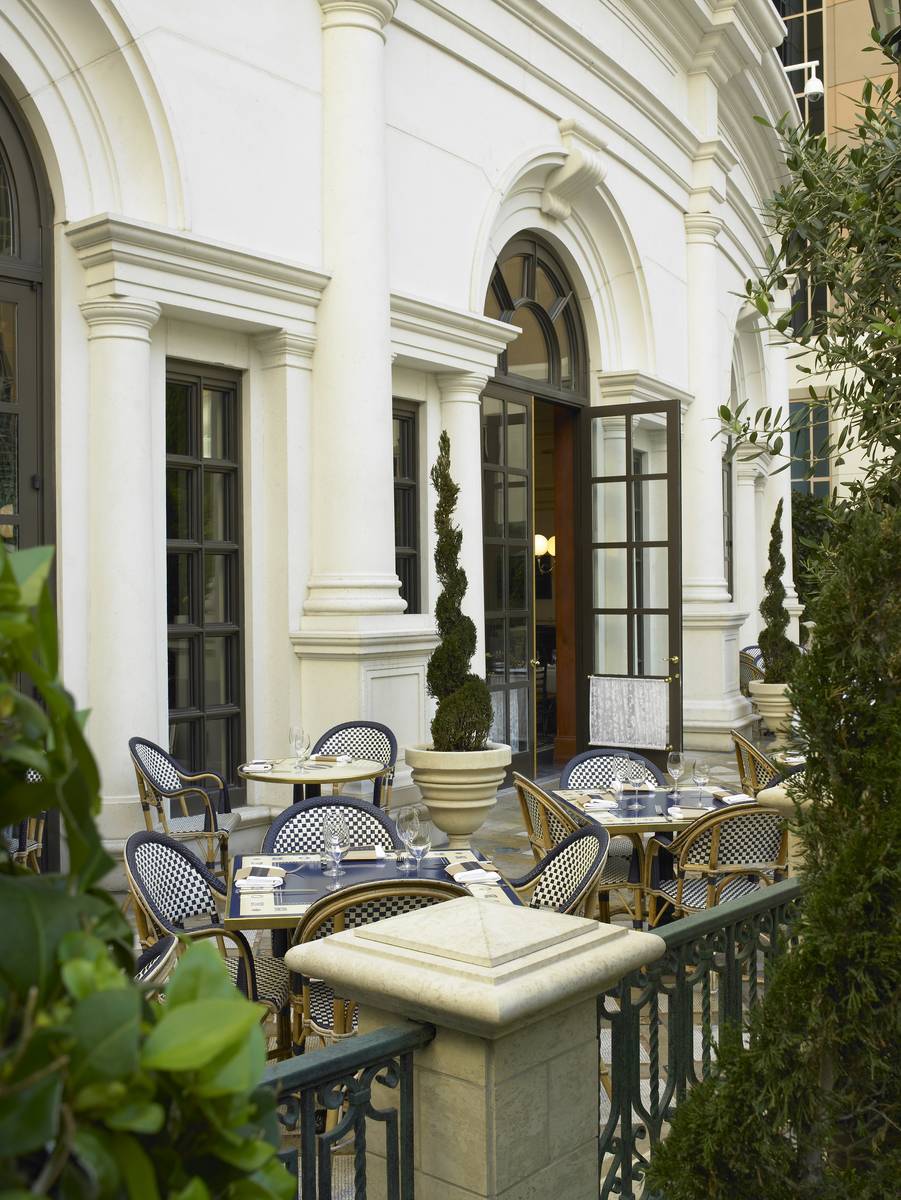 The patio at Bouchon at The Venetian. (Bouchon) 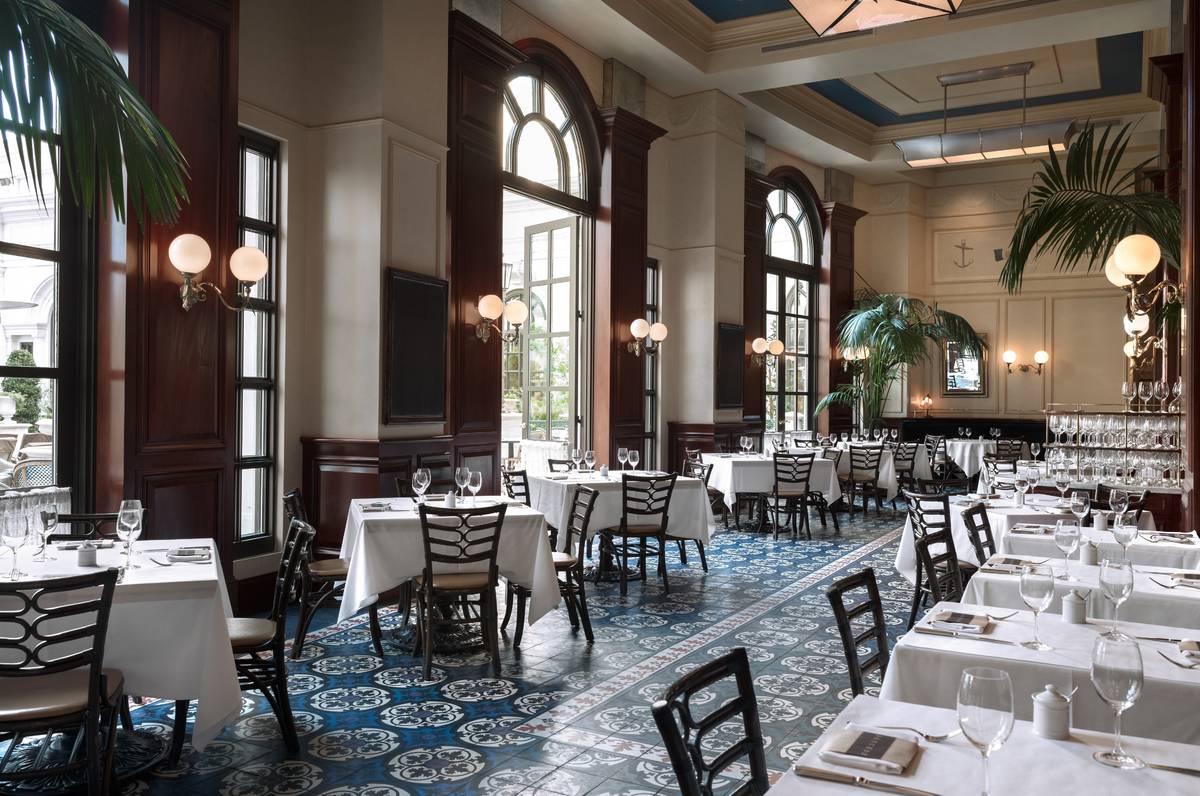 The interior of Thomas Keller's Bouchon at The Venetian. (Bouchon) 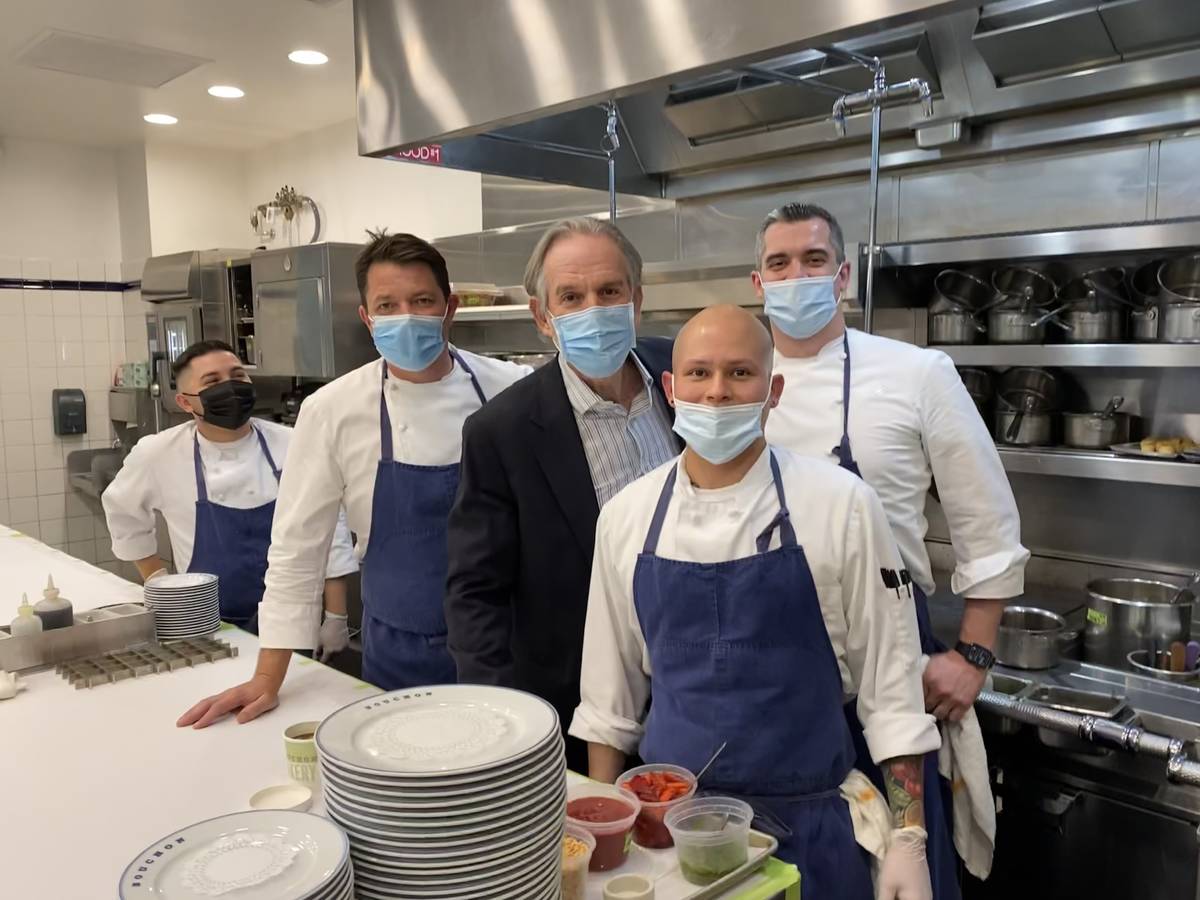 Thomas Keller, center, checks in with his team in the kitchen at Bouchon at The Venetian on April 9, 2021. (Al Mancini/Las Vegas Review-Journal)

Thomas Keller is optimistic about the future, not just for his local Bouchon outpost at The Venetian, but also for the restaurant industry as a whole.

“The resurgence of the desire for people to go out is really overwhelming,” Keller said this month, on Bouchon’s outdoor patio adjacent to the pool deck of The Venetian’s secluded Venezia Tower. It marked his first visit to the restaurant, or Las Vegas, since before last year’s shutdown, and he was encouraged by the crowds.

The classic French bistro has been busy enough to reopen for dinner five days a week, and brunch for three. That’s down from the 14 meals a week it was doing before COVID-19, along with private functions that have since dried up, but enough to bring back about half of the restaurant’s 200 employees.

Keller, for his part, never stopped working. The original Bouchon Bakery in Yountville, California, and his Miami eatery, The Surf Club Restaurant, never stopped serving customers, although both spent some time as takeout-only operations. And the chef has also been lobbying and conferring with government officials on all levels on behalf of the restaurant industry.

“You know, the visit with the (former Trump) administration … was very instrumental in getting the (Paycheck Protection Program) changed,” he says. And though his efforts to have pandemic closures covered under business interruption insurance was “kind of frustrating,” and less successful than he’d hoped, Keller says he’s “learned a lot, and we made a lot of progress.”

Despite that progress, the chef’s dining empire has not emerged from the pandemic unscathed. In New York City, he was forced to close four of his five enterprises. So while Michelin three-star Per Se is once again delighting customers with Keller’s most refined creations, all three of New York’s Bouchon Bakery outposts and the high-profile and high-end TAK Room are now permanently shuttered. (TAK Room had opened in Manhattan’s Hudson Yards development almost a year to the day before the city shut down.)

“Hudson Yards itself was a struggle from the beginning with bad press, and then COVID hit,” Keller notes of the latter project, which had raised eyebrows and made headlines for the prices of its a la carte Continental fare. “So what do you do with a restaurant that’s a year old that’s facing a pandemic for an unspecified amount of time? We weren’t the only fatality in Hudson Yards. There are so many others — whether it’s the retail space or the restaurants, that eventually just closed, and just gave up.”

TAK Room may have closed, but its spirit lives on. Miami’s Surf Club is seen by many as a sister restaurant, boasting a similar menu and style. But what about Las Vegas?

“When I came up with the idea of TAK Room in 2006, there were three cities: New York, Miami and Las Vegas,” Keller says. And prior to the pandemic, a local TAK Room at Wynn Las Vegas was among the most highly-anticipated 2020 restaurant openings. Local foodies were abuzz with rumors on how Keller was transforming Wynn’s old Country Club space to accommodate the concept.

When asked about the project, Keller concedes that “a lot of things have changed this past year, with COVID.” But he’s optimistic.

“We’re excited about coming to Las Vegas,” he says of TAK Room. “And certainly, we love Wynn. It’s just a continuing conversation. We’re very positive about it, and we hope to be there sometime soon.”

In the meantime, Keller is excited as ever about his relationship with The Venetian, which was recently sold as part of a $6.25 billion deal. In fact, he says he spoke to several Venetian/Palazzo executives during his visit, and they all seemed enthusiastic about Bouchon, a 17-year resident at the resort and holder of a 10-year lease signed two years ago.

The chef attributes Bouchon’s continuing success, first and foremost to its staff: “From the beginning we’ve had a very strong team here.” Beyond that, he believes the restaurant’s classic French fare continues to resonate, despite changing tastes.

“It’s food that has reference points,” he says of the menu. “It’s a roasted chicken. It’s trout almondine. It’s onion soup. It’s pâté. It’s profiteroles. It’s all the things that aren’t intimidating. In a way, it’s about comfort.”

Finally, he credits Las Vegans for embracing his Strip establishment, particularly its brunch.

“In the beginning I told the team that we want to make sure that locals are important to us. It’s not about just the visitors to Las Vegas, but the locals as well. And our local business at brunch is like 30 percent of our guests. I’m really proud that the locals like to come here on the weekends and have a wonderful brunch.”

Brunch is served Fridays, Saturdays and Sundays; dinner is served Thursdays through Mondays.

The Review-Journal is owned by the family of Sheldon Adelson, the late CEO and chairman of Las Vegas Sands Corp., which operates The Venetian and Palazzo.