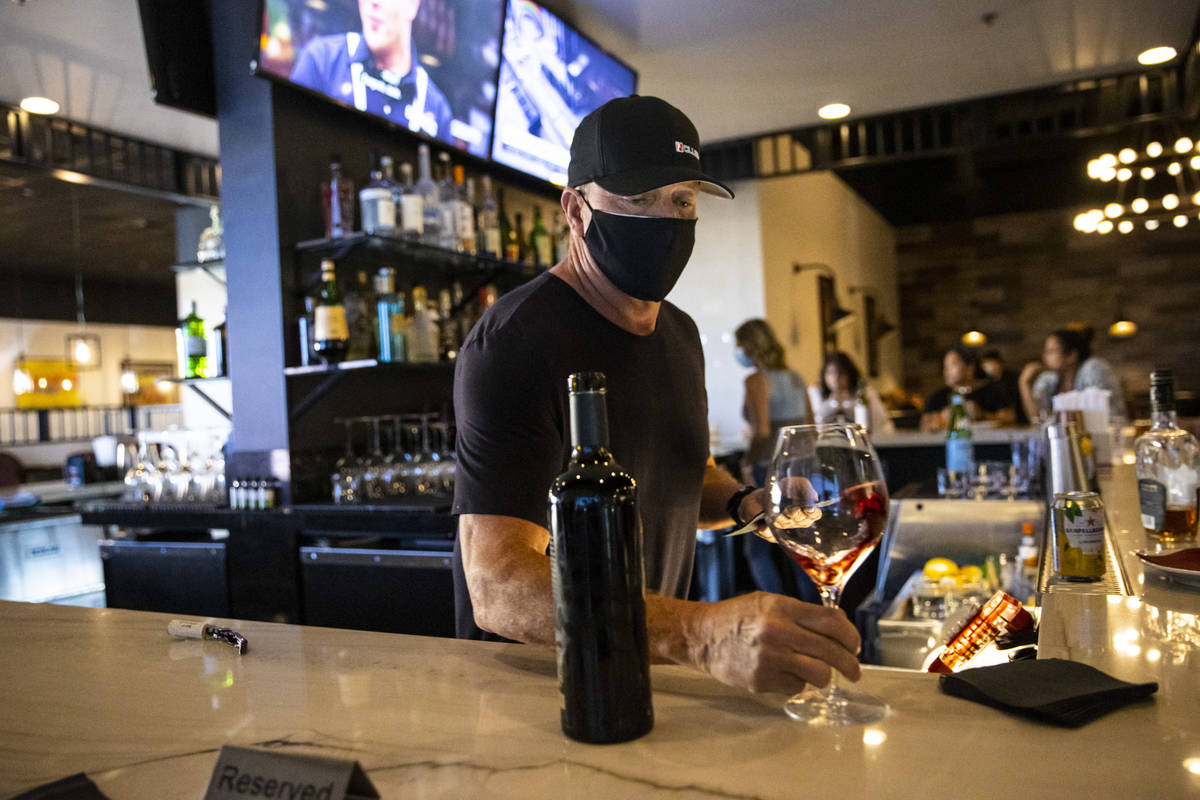 Bar manager David Cooper prepares a glass of wine during happy hour at Spaghetty Western in the Southern Highlands area in Las Vegas on Friday, July 10, 2020. Some restaurant owners and managers were confused on Wednesday, Sept. 9, whether they could open bar seating areas in their establishments. (Chase Stevens/Las Vegas Review-Journal) @csstevensphoto

A recent order by the governor sowed confusion among restaurant owners and officials across the Las Vegas Valley on Wednesday.

At issue was bar-top and counter service at places that serve food. A Sept. 3 directive spelled out guidelines that restaurants with counter service in seven of the state’s counties would have to follow as of Wednesday. For Southern Nevada, it read, “Bars will remain closed in Clark, but it was clarified by the (COVID-19 Mitigation and Management) Task Force that counter tops in non-bar areas may be opened for food service under existing restaurant guidelines.”

That wording led several restaurant operators to believe they could reopen bar areas provided food was served there. A spokesman from the city of Las Vegas said the city’s business-licensing division believed the relaxation of the prohibition applied to all but “traditional bars and taverns.”

Apparently, that was not the task force’s intention, said Clark County Commission Chairwoman Marilyn Kirkpatrick, who led the county contingent asking the task force to lift the countertop ban.

“We’re trying to get as many things open as possible,” Kirkpatrick said Wednesday afternoon. “The bottom line is we were only trying to open the countertops. If you went into a Denny’s or a Lou’s Diner, you couldn’t sit at the countertop” and now you can.

“I’ve had questions on this all weekend, and rightfully so,” she said. “People are trying to open up as much as possible.”

Gino Ferraro was preparing for a TV interview Wednesday evening to discuss the reopening of his bar area at Ferraro’s on Paradise Road when he got some troubling news.

“I came into work at 4:30, and I had an interview scheduled with Channel 5 regarding opening the bar,” he said. “And my assistant told me, ‘We just got a memo from Catherine at the Nevada Restaurant Association that you cannot open the bar.’”

Ferraro was confused, having been under the impression that “bar tops, if you’re serving food, are (allowed) to open.” So he began calling around to other owners to find out their plans.

“They say, ‘We don’t know, we’re confused,’ ” he said of his colleagues. “There is no clarification on what to do. Nobody comes on TV and tells us to do this. There is no leadership in this state right now.”

The governor’s office did not respond Wednesday to requests for comment and clarification.

“It was very weird wording,” Cooper said. “Anytime a message comes out and they add the word ‘et cetera’ to it, (it’s confusing).”

Cooper and his partners quickly began conferring with restaurant owners in their neighborhood. By Tuesday, they had come to the conclusion that they would be allowed to again serve customers at the restaurant’s bar on Wednesday.

He freely admits it was “just hearsay from all the other restaurant owners,” and he became nervous about the interpretation when people in the industry began debating the rules on social media.

“Other Southern Highlands restaurants were going through the same thing,” he said. “We were all talking to each other. And (eventually) it seemed clear that we were going to be able to open.”

The Stove’s Antonio Nunez came to the same conclusion. While his Henderson restaurant was closed earlier this week for electrical work, he had planned to begin serving customers at its bar when it reopens Thursday. He agrees it has been confusing.

“You talk to whoever you can,” he said. “I’ve talked to other restaurants. I’ve called the city. And no one knows the exact, what (the rule) is. And no one, still, can give us that answer,” as of Wednesday evening.

Kirkpatrick said all jurisdictions across the county met with health district officials Wednesday to clarify the rule.

Nunez points out, though, that guessing wrong could have devastating consequences.

“How do we operate and stay in the guidelines without being fined astronomically?” he asked. “And for some of us, that could shut us down.”

Matt Silverman, a chef and restaurateur who operates seven Las Vegas businesses on and off the Strip, said it took him awhile to arrive at the conclusion that he couldn’t reopen the bars in his establishments.

“The confusion started with the last statement the governor made when he had his news conference,” he said. “The way that he answered a question was very vague and left room for interpretation.”

To clarify, Silverman went online to see what had been posted by the state.

“I’m not saying I agree or disagree with the policy,” he said. “But the policy is in place (because) a bar really encourages a social environment. It has drinking. People lose their inhibitions. They don’t have masks on because they’re drinking. And people want to mingle, congregate and have that social interaction. If you look at it through that lens, then everything makes sense. You don’t have those issues at a countertop at a breakfast restaurant.

“I just want to make sure I’m abiding by the correct policy. My goal is to keep staff and guests safe.”

This story was updated to reflect new information clarifying the governor’s directive.