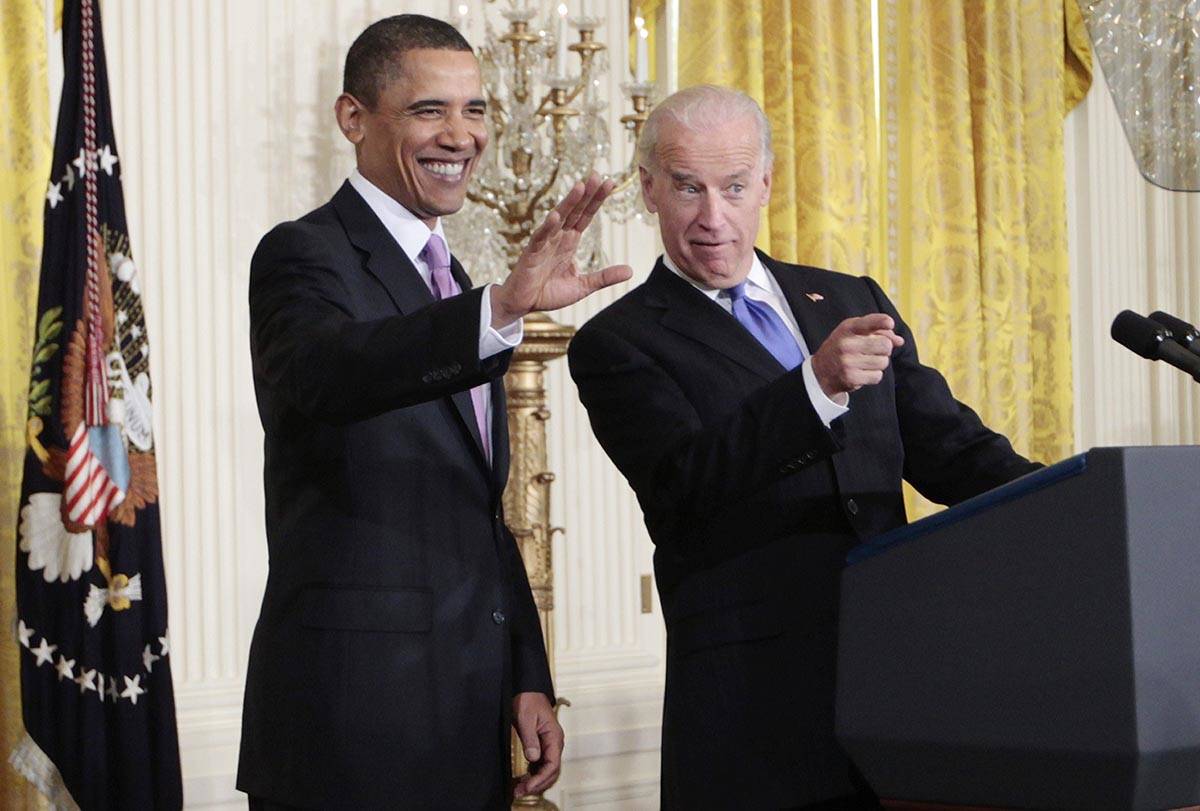 In a Jan. 21, 2010, file photo President Barack Obama and Vice President Joe Biden acknowledge mayors in the audience before they addressed the U.S. Conference of Mayors at the White House in Washington. Biden has a net worth of $9 million while Obama has a net worth of $70 million, according to Celebrity Net Worth. (AP Photo/Charles Dharapak, File)

The current salary for the president of the United States is $400,000, while the vice president earns an annual salary of $230,700. Although that’s not chump change, some of the politicians who have held these esteemed positions have been able to parlay their time in the White House into millions through book deals, paid appearances and consulting gigs. Here’s how former President Barack Obama, former Vice President Joe Biden and other politicians have used their time in office to boost their net worth.

Net worth: $9 million, according to Forbes

Joe Biden began his political career as a senator in 1979 at the age of 29 — making him the youngest candidate ever elected to the Senate, Forbes reported. He later served as Delaware’s attorney general and served as vice president with former President Obama from 2009 to 2017.

Keep reading to find out more about how he’s made his millions.

According to Biden’s tax returns, he earned $71,000 in royalties and an additional $9,500 for audiobook rights after Random House published his first memoir, “Promises to Keep,” Forbes reported. And in the 23 months following the end of his turn as vice president, Biden earned $1.8 million from book tour events.

During that same time span, Biden earned $2.4 million in speaking fees stemming from 19 separate engagements, Forbes reported. That amounts to an average fee of $126,000 per speech.

In 2017, Biden was named the Benjamin Franklin Presidential Practice Professor at the University of Pennsylvania, leading the Penn Biden Center for Diplomacy and Global Engagement. His turn as a professor at the Ivy League school earned him a $775,000 paycheck, Forbes reported.

George H.W. Bush served as the 41st president of the United States from 1989 to 1993. He previously served as vice president with Ronald Reagan and also had served as director of the CIA, ambassador to the United Nations, chairman of the Republican National Committee, U.S. envoy to China and U.S. Congressman. Bush died in November 2018.

Here are some ways he made big money thanks to his time in office.

Toward the end of his presidency, George W. Bush told Robert Draper, author of “Dead Certain,” that his father, George H.W. Bush, commanded more than $50,000 or $75,000 per speech.

Other Politicians: How Much Is Elizabeth Warren Worth?

Bush authored and co-authored a number of books over the years, including his autobiography, “Looking Forward, A World Transformed,” and “All the Best, George Bush: My Life in Letters and Other Writings.” Although the exact amount he earned from his book deals hasn’t been released, Money reported that he received “significant royalties.”

George W. Bush followed in his father’s political footsteps, serving two terms as president from 2001 to 2009. He was president during the Sept. 11, 2001, terrorist attacks, an event that challenged the nation and transformed Bush into a wartime president.

Bush has doubled his fortune since leaving the White House — he entered it with a $20 million net worth, according to a report by American University.

Here’s how he grew that net worth.

In 2015, Politico found that Bush was paid anywhere between $100,000 and $175,000 per speech, earning him tens of millions of dollars in just a few years after leaving political office.

Bush has authored three books: “Decision Points” (2010), “41: A Portrait of My Father” (2014) and an art book, “Portraits of Courage: A Commander in Chief’s Tribute to America’s Warriors” (2017). His deal for his first book alone was valued at $7 million, according to the Daily Beast.

Bill Clinton took office at the end of the Cold War, serving as the 42nd president of the U.S. from 1993 to 2001. He was the first baby-boomer generation president.

According to a report by American University, Clinton has done the most to monetize his post-political career. When he took office in 1993, his net worth was just $1.2 million.

Find out what he did to make all that money.

According to CNN, Clinton — along with his wife, 2016 Democratic presidential nominee Hillary Clinton — have earned an average of $210,795 per speech since they exited the White House in 2001. The couple gave 729 speeches from February 2001 until May 2015, which equals a payday of more than $153 million.

Clinton received a $15 million advance for his 2004 autobiography, “My Life,” The New York Times reported. In total, he’s earned $29.6 million from his autobiography and his other book, “Giving.”

Post-presidency, Clinton formed a partnership with billionaire investor Ronald Burkle. The New York Times reported that Clinton earned somewhere between $12.6 million and $15.3 million between 2002 and 2007 as an advisor for Burkle’s Yucaipa Companies.

He also has worked as a consultant for the consumer database company InfoUSA, which has paid him $3.3 million over the years.

Read more: A Look at the Finances of Bernie Sanders

Gerald Ford was the first vice president to take on the role of president after former President Richard Nixon resigned. He took the oath of office in August 1974. Though he won the Republican presidential nomination in 1976, he lost the election to Jimmy Carter.

Even though he only served as president for three years, Ford was able to turn his time in the White House into millions. He entered the White House with a $1.4 million net worth and amassed an additional $5.6 million before he died, according to a report by American University. He was the first former president to monetize his time in the office, according to The Washington Post.

A pioneer of paid speeches

Before Ford, presidents lived simple lives and were not expected to make outside income aside from book royalties. Ford changed all that by getting paid to make speeches, appearing at conventions, meetings and even the opening of a shopping center, The Washington Post reported.

Ford accepted memberships on corporate boards of companies like 20th Century Fox and American Express after leaving office in 1977, according to The New York Times.

Al Gore was elected to the U.S. House of Representatives in 1976 and later became a member of the U.S. Senate. He then went on to be inaugurated as the 45th vice president of the United States in 1993 and served eight years. Currently, Gore is the chairman of Generation Investment Management, which he co-founded, and the founder and chairman of the nonprofit The Climate Reality Project.

Read on to find out how he made much of his money.

Gore co-founded the London-based investment firm Generation Investment Management to invest money in businesses that were environmentally responsible. The firm raised profits of almost $218 million between 2008 and 2011, which was split between 26 partners, Forbes reported. If it were an even split, Gore would have made over $8 million during those years.

Cashing in on a cable network

In 2013, Gore and his business partner Joel Wyatt sold their cable network Current TV to Al Jazeera. Gore made $70 million off the deal, Forbes reported. Gore had previously been paying himself $1.2 million a year in salary and bonuses as an owner of the network.

Although it hasn’t been reported how much he’s earned from his book deals, Gore has certainly added to his net worth with his books’ successes. He has written three New York Times bestsellers — “An Inconvenient Truth,” “The Assault on Reason” and “An Inconvenient Sequel: Truth to Power” — and three other books.

Gore has also been the subject of two documentary movies.

Barack Obama was elected the 44th U.S. president and served two terms beginning in 2009. He previously served on the Illinois State Senate and the U.S. Senate.

Obama entered the White House with a $1.3 million net worth, and a report by American University speculates that he could earn as much as $242.5 million in post-White House income.

Obama is officially a part of the elite club of former presidents who demand dizzyingly high speaking fees. He agreed to give a speech at a conference run by Wall Street trading and investment firm Cantor Fitzgerald in September 2017 for a whopping $400,000, CNBC reported. The fee is equivalent to the annual salary paid to the commander-in-chief.

A little more than a month out of office, news broke that Obama and former first lady Michelle Obama had signed a book deal with Penguin Random House that likely stretched well into eight figures, The New York Times reported.

That’s money on top of what he’s already earned from his previous books. Forbes estimates that he earned $6.8 million from “Dreams From My Father” and $8.8 million from “Audacity of Hope” and “Of Thee I Sing: A Letter to My Daughters” between 2005 and 2016.

In 2018, the Obamas signed a multiyear production deal with Netflix to produce series and movies for the streaming service, Variety reported. It’s unknown how much the Obamas made from the deal, but Netflix is known to pay well. The streaming giant previously struck a deal with Shonda Rhimes valued at $100 million and a deal with Ryan Murphy valued at as much as $300 million.

Originally an actor, Ronald Reagan successfully made the transition to politician and went on to become the 40th president of the U.S. He served two terms, from 1981 to 1989.

Reagan was already well-off when he entered the White House, with a net worth of $10.6 million before starting his first term, according to a report by American University.

See how he grew his income outside of the office.

In 1989, Ronald Reagan served as the main attraction at a Tokyo symposium sponsored by the Japanese media conglomerate Fujisankei Communications Group. His fee for a pair of speeches reportedly totaled $2 million, according to The New York Times.

Reagan signed a reportedly $5 million deal in 1989 to write two books for Simon & Schuster, according to the Los Angeles Times. In addition to those two books — “An American Life” and “Speaking My Mind” — he also penned “The Reagan Diaries” and “The Notes: Ronald Reagan’s Private Collection of Stories and Wisdom,” which were published by HarperCollins.

30 easy home improvement projects you should tackle this summer

This article originally appeared on GOBankingRates.com: How Obama, Biden and other elected officials have made millions by being in office